Read The Dog That Whispered Online

The Dog That Whispered 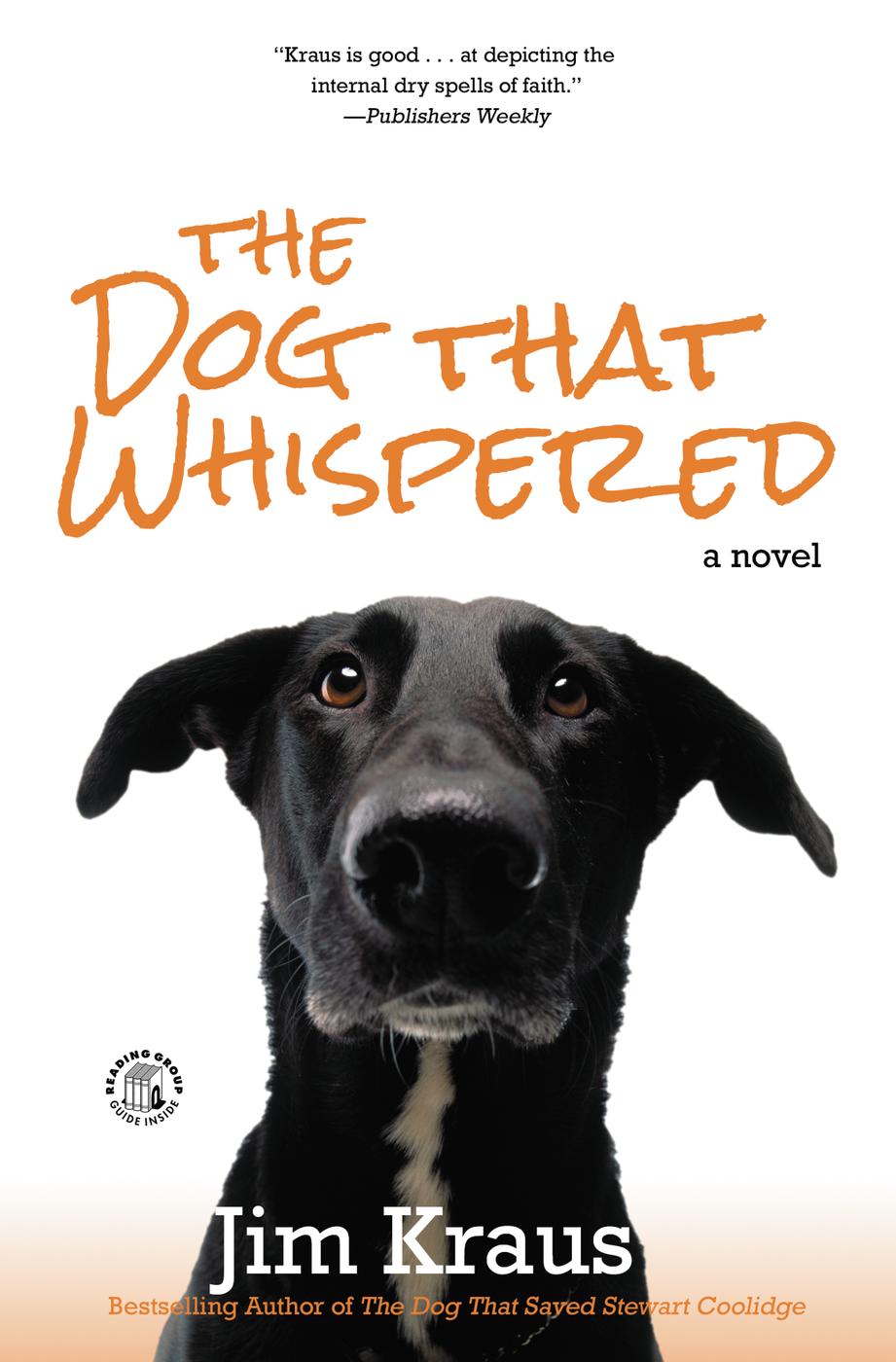 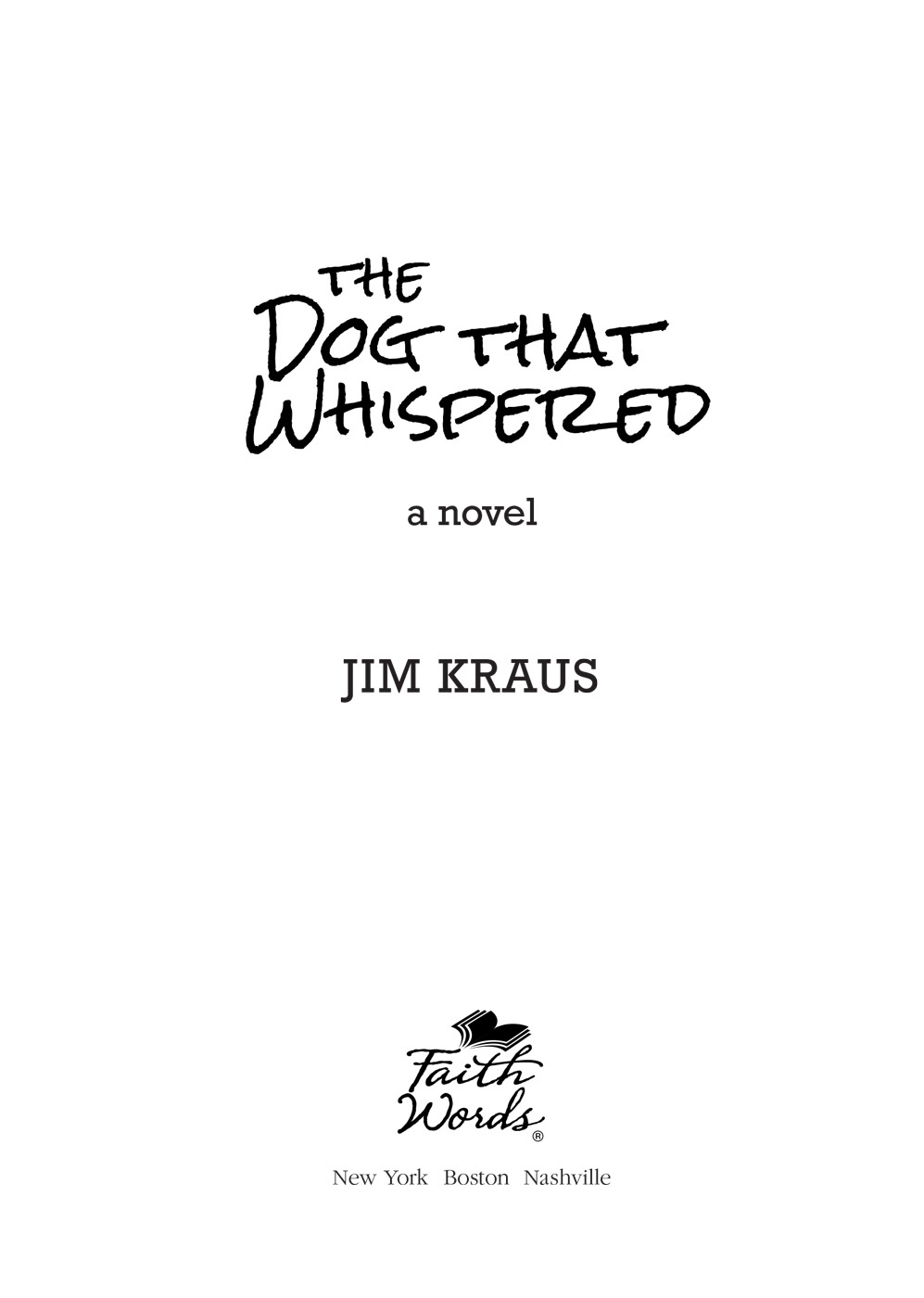 In accordance with the U.S. Copyright Act of 1976, the scanning, uploading, and electronic sharing of any part of this book without the permission of the publisher constitute unlawful piracy and theft of the author's intellectual property. If you would like to use material from the book (other than for review purposes), prior written permission must be obtained by contacting the publisher at [email protected] Thank you for your support of the author's rights.

To all veterans and the dogs who love them.

G
RETNA
S
TEELE
shuffled past the television. She kept the set muted, but it stayed on for the entire day.

“Nobody in this âretirement village' can hear worth beans. Why should I turn up the volume? I'm already being forced to listen to six other programs from every apartment on this floor.”

What was being shown on the screen caught her eye. She shuffled to a stop and pulled the remote out of the pocket of her pastel housedress. She stabbed at the yellow button while turning the remote toward the TV, to help push the electronic beam into the set's electric eye.

She knew the extra push made the television respond faster.

The older analog TV, the size of a small refrigerator, barked into full voice.

“No. Not sad. Plaintive. Manipulative.”

Gretna often self-narrated the small events in her daily routine.

She leaned forward and narrowed her eyes. She had glasses somewhere, but seldom wore them.

“They make me look old. I may be eighty-five, but I don't have to dress the part,” she often said.

The commercial continued. A series of dogs with sad faces appeared on the screen.

“Adopt one of these,” the announcer said, with just the right amount of gravitas, “and you'll be making the world a better place for one lucky dog or cat. And yourself.”

And then Gretna noticed something. The commercial was not the finely tuned, slick presentation of a national campaign. It was not a video done by some corporate animal rescue organization. This had to have been locally made and producedâperhaps by some volunteer at the shelter who happened to have a decent video camera.

In the foreground were two sad dogs, each apparently selected because they could emote maximum pathos. In the background stood another dog. This dog was black and active and bouncing and grinning and looking directly at Gretna, almost as if he was daring her to look away, to not be affected by the announcer's plea, smirking and wiggling and grinning cheek to jowl.

“That dog has guts,” she said to herself. “He's not buying into their propaganda.”

Then the black dog in the background stopped and simply stared, but his grin remained at half power. Gretna was sure the semi-happy beast was staring directly at her.

She thought for a moment.

“So where is this place, anyhow?”

And in a few seconds, the announcer gave the address. Twice. And asked for donations three times.

It took less than an hour for the taxi to arrive. Gretna climbed in, pulled out a small pocket-sized notepad, and made a most deliberate show of writing down the cabbie's name and cab number. She made sure the cabdriver saw what she was doing.

“Mizz Steele, you don't scare me. I drive you six times in a month,” the driver said with a thick accent. Gretna thought it was perhaps Caribbean, perhaps Middle Eastern. Even African. He was from somewhere else and not hereâof that Gretna was certain.

She leaned closer to the Plexiglas partition, narrowing her eyes, determined.

“I did, Mizz Steele. Last time, we go to de Giant Eagle. Remember? You paid in quarters.”

The driver, one Sharif Moses Yusry, sighed and put the cab into gear.

“Where to, Mizz Steele?” he asked. “De Giant Eagle again?”

Gretna scowled at the rearview mirror.

“No. I don't eat that much. Or spend that much. Who do you think I am? A drunken sailor?”

The cabdriver sighed, signaling that he knew arguing, or even adding a comment, was futile, but stopped when he reached the end of the circular driveway.

Gretna flipped the page on her notepad.

Sharif did not pull out.

Gretna scowled again, then responded with a more agreeable tone.

“You're a cabdriver, for heaven's sake. If you don't know where it's at, then let me call for another cabdriver who does know.”

Sharif slumped in the front seat.

“Mizz Steele, I know address. I know street. What will I look for? A house? A store? What?”

“And that's none of your business, actually. But if it helps you find the place without taking me on a wild-goose chase, then it's the Animal Rescue League of Western Pennsylvania.”

Sharif remained still, even though his surprised expression was reflected in the rearview mirror.

“You adopt a kittycat?”

Gretna leaned back in the seat.

“Again, none of your business. But, no. I'm adopting Thurman.”

Professor Wilson Steele set his cup of coffee down on the round kitchen table with precisionâthe very same table that had been in the kitchen since Wilson was a child: chrome legs and Formica top, the table surface mainly gray with a squiggling pattern of red and gray lines, which Wilson always thought looked like snakes, or some sort of 1950s virus, worn almost colorless in a couple of spots by several thousand meals eaten at those very places.

Wilson had rotated the table one-half turn fifteen years ago and now sat at a relatively unworn location, his chair still facing the same direction as it had when he was youngerâthe same direction he had always faced, since birth, the truth be told.

Or at least since being able to sit in a high chair.

His seat faced the kitchen window over the sink and had a prime view of the large oak tree in the side yard.

Or
used to
have a view of the oak tree.

The tree had succumbed to natural causes a decade earlier, and it cost Wilson an obscene amount of money to have it cut down, chain-sawed into smaller sections, and hauled away. He would have left that spot bare, but without the oak tree as a shield, he could see directly into the kitchen of Rod and Linda Heasley, an overbearingly friendly couple who were relative newcomers to the neighborhood, having arrived some twenty years earlier.

Linda Heasley had had the temerity to wave to him after the oak was dispatched. Yes, wave to him as he sat and enjoyed his cup of coffee in the morning.

He assumed that social protocol required him to wave back.

And on that same day, between the writing classes he taught at the University of Pittsburgh, he had ordered an obscenely expensive thirty-foot maple tree to replace the oak and harangued the nursery to deliver it the following day.

The maple wasn't as full or as large as the oak, but it was a serviceable screen between the two houses.

“Good fencesâand big treesâmake good neighbors,” he said to himself, the same thing he had said to himself every time he sat at stared at the maple tree, which was now coming into green.

Wilson's house, originally his parents' house, sat, as the crow flies, only two miles from where his mother now lived. It had a phone that had been placed in an alcove. This was the same alcove that had held that phone ever since he was young, during the time when the family owned only a single phone. Wilson believed that the architect of the house had designated this small niche to be the “phone alcove,” on the premise that a family would have but one phone and one outlet onlyâas God intended it to be.

Now Wilson had a wireless phone system with four separate phones scattered throughout the house. But to Wilson, talking on this specific phone, located in the alcove, made it an official phone call. So it was the one he usually used. That phone began to ring and Wilson picked it up.

“No, Mom, I'm hang gliding off of Mount Washington. Of course I'm home. You called the landline. I have to be at home to answer that, remember?”

“Do not get snippy with me, young man. I was merely making conversation.”

Wilson took a deep breath and stared at himself in the hall mirror. He wondered how many reflections this mirror had seen over the decades it had hung there. He ran his hand over his short salt-and-pepper hair. It was only just a bit thinner than it had been when he was young, but it still gave him a very average, nearing-senior-citizen-status, grayed appearance. He had never considered himself handsome, nor notable in any physical way, just averageâaverage height, average weight, average coloring, modestly blue eyes, average, all of it average, tending to invisibility.

“Wellâ¦you have to come and get my dog.”

Wilson did not speak for a long moment. He did not have a dog growing up. As far as he knew, his mother never had a dog growing up. No one in their family had dogs. So this was probably not a flashback to some childhood memory.

He typically used the word “Mother” rather than “Mom” as his exasperation rose.

He heard her sigh with an increased degree of that same exasperation.

Wilson heard some sort of rusty noise in the background. A manner of vague growling.

It could be the TV. That was always on.

“Mom. A dog? Are you drinking enough water? Remember what Dr. Farkas said. You get dehydrated and you start hallucinating. That happens easily with his older patients.”

He heard his mother snort in derision.

“I'm not an âolder patient,' that quack. And I am not seeing things. Thurman is here with me. And he can't be. With me, I mean. Because he is definitely here. So you have to come and get him.”

Her grip on reality was clearly starting to become tenuous.

“Okay, Mom. Settle down. I have to go to class now. I'll stop over when it's done. This afternoon. Okay? And take care of your âdog.' Okay?”

And then she hung up and Wilson was not sure if she had addressed the last comment to him or to the dog, imaginary or otherwise.