The Final Years of Marilyn Monroe: The Shocking True Story 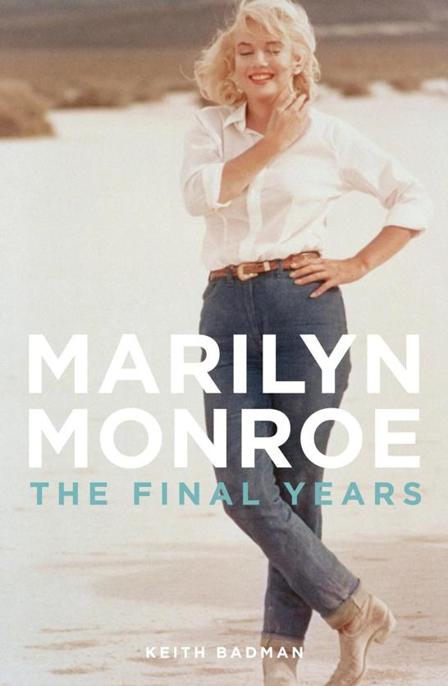 4 Marilyn and the Kennedys – The Unequivocal Truth: Saturday 23 September 1961 and beyond

1. October 1960, Pyramid Lake, Nevada. Marilyn and her third husband, the playwright Arthur Miller, take a break during the filming of
The Misfits.

2. 11 November 1960, New York. Marilyn attempts to leave her apartment following the announcement that she was divorcing Arthur Miller. ‘Arthur is a wonderful writer,’ she would remark, ‘but I think he’s a better writer than a husband.’

3. 22 March 1961, Reddington Beach, Florida. DiMaggio sticks his tongue out to waiting journalists who were attempting to disrupt his and Marilyn’s rest on the beach.

4. 14 June 1961, Sands Hotel, Las Vegas. Dean Martin’s surprise belated 44th birthday celebration, midnight. Marilyn was seen seated at the very edge of the Sands’ stage, champagne glass in hand, gently swaying along to the music, enthusiastically applauding each number and gazing up adoringly at Sinatra as he performed. Seated alongside her were Martin and her great screen rival, Elizabeth Taylor.

5. 15 June 1961, Idlewild Airport. Marilyn arrives back in New York following her flight out of Los Angeles. Amid tidal waves of wolf-whistles and flash bulbs, she remarked ‘No comment’ to reporters who enquired why she had suddenly returned.

6. 11 July 1961, the Polyclinic Hospital, New York. After two weeks of recuperating, Marilyn was wheeled out of hospital following gall-bladder surgery. Before doing so, her obligatory New York hairstylist, the eminent Kenneth Battelle had been urgently summoned to fix her tresses. ‘I had flown in from Europe that day,’ he recalled. ‘I flew to New York for three hours just to do Marilyn’s hair.’

7. 11 August 1961, Beverly Hills Hotel. Marilyn fulfils the wishes of 14-year-old Barbara Heinz, who was dying of incurable bone cancer in Wisconsin’s Appleton Memorial Hospital. With just a month to live, the young girl, a keen collector of toys, penned a letter to the actress requesting a picture of her with Maf. Marilyn duly obliged. This photograph arrived at the girl’s bedside on Wednesday 23 August inscribed with the words, ‘From Marilyn Monroe to Barbara Heinz. With love.’

8. 5 March 1962, Golden Globes ceremony. By Marilyn’s side at this star-studded event was the Mexican-born Jose Bolaños. His presence naturally ignited rumours in the American press of a ‘Latin lover’ in Marilyn’s life. However, aside from a few short walks in the moonlight, there was no romance. Just days after the lavish ceremony, and with the actress clearly tired of his company and the language barrier, Bolaños was packing his bags, heading back to his motherland.

9. 5 March 1962, Golden Globes ceremony, the International Ballroom of the Beverly Hilton Hotel. After a poll carried out by the Hollywood Foreign Press Association, Marilyn’s apparent fall from prominence proved to be premature when she was bestowed with the Henrietta Award for the World’s Favourite Female Movie Star. She is pictured here with the actor, Rock Hudson.

10. 10 April 1962, Twentieth Century-Fox Studios, Los Angeles, screen-tests for
Something’s Got To Give
. Marilyn’s first appearance on a film set in 17 months. This was a newborn Monroe. Aided by her new svelte 22-inch waist and 8-stone 4lbs body weight, she was considerably more sophisticated and stylish than she had ever been before.

11. 10 April, 1962, Twentieth-Century Fox Studios, Los Angeles, screen-tests for
Something’s Got to Give.

13. 19 May 1962, Madison Square Garden, New York. During a break in rehearsals for the JFK Gala, Marilyn sits and chats with one of the event’s co-organisers, the legendary English-born ‘party-planner’ Clive David. ‘She was the high-spot of the evening,’ he admitted. ‘The guest-list was incredible but she was the true highlight of the whole thing.’ (From the collection of Clive David.)

14. As a keepsake from the event, reproduced here for the very first time, Marilyn inscribed a wall-tile for David with the words, ‘To Clive love & kisses Marilyn Monroe’. An inscription by the Strasbergs (Lee and Paula) can be seen at the bottom of the image. (From the collection of Clive David.)

15. 19 May 1962, Madison Square Garden, New York, 11.30 p.m. In front of 12,000 loyal Democratic Party members, Marilyn half-sang, half-talked an extremely sultry, sexually charged, super-slow rendition of ‘Happy Birthday’ in a way that no one had ever heard it sung before. Before she did so, she thought to herself, ‘By God, I’ll sing this song if it’s the last thing I ever do.’

16. The original invoice for Marilyn’s world-famous dress she wore that night. (From the Keith Badman collection.)

17. 19 May 1962, Upper East Side townhouse at 33 East 69th Street, New York, a private after-show gathering. In this world-famous picture, Marilyn, still wearing her legendary dress, stands in the library between John and Bobby Kennedy. In the palm of her left hand is her present for JFK, an 18ct, $5,000 gold Rolex ‘President’ watch (pictured above) inscribed with the words, ‘Jack, with love as always from Marilyn, May 19th, 1962.’ Tucked inside the timepiece’s box was a poem, which read, ‘Let lovers breathe their sighs / And roses bloom and music sound / Let passion burn on lips and eyes / And pleasures merry world go round / Let golden sunshine flood the sky / And let me love / Or let me die!’ This is the only known picture of the actress taken with either of the Kennedy brothers.

19. 1 June 1962, Chavez Ravine Stadium, the home of the Los Angeles Angels baseball team. In front of a record-breaking 51,584 crowd, Marilyn blew kisses and made an appeal for donations for the Muscular Dystrophy Association. Throughout the evening, with the wind blowing hard through the stadium, the actress fought hard to keep her hat attached to her head. The Angels’ smallest player, outfielder Albie Gregory Pearson is amongst those pictured alongside her. Besides being Marilyn’s 36th birthday, it was also her very last public performance.

20. 4 August 1962, 12305 Fifth Helena Drive, Brentwood. At approximately 4 p.m. on the day of her death Marilyn received a delivery of, amongst other items, petunias, begonias, sedums, terracotta pots, a Mexican lime tree, a hanging begonia basket and some hummingbird feeding stands from Franks Nurseries & Flowers shop at 12424 Wilshire Boulevard. This is one of the actress’s receipts from the sale, made on 1 August. (From the Keith Badman collection.)

21. August 1962. Eunice Murray didn’t like being called Marilyn’s housekeeper. ‘I guess there’s no word in the dictionary to exactly describe what I was,’ she admitted. ‘I was her chauffeur, her cook, her real estate agent, her social secretary.’ In truth, she was a house-spy, sent by Dr Greenson, and never once did she let on to the actress she had a background as a psychiatric nurse. It was a vocation she had been employed in since 1951.

22. 5 August 1962, rear of Marilyn’s home, 12305 Fifth Helena Drive, Brentwood, morning – two baubles, one a tiger, the other a lamb, lay abandoned on the grass, at the exact spot they landed the night before, at the conclusion of a game of ‘fetch-ball’ between Marilyn and Maf.

24. August 1962. Coverage of Marilyn’s death featured prominently for several days in newspapers right across the globe.

D
uring the course of my research, I travelled thousand of miles, sat in a hundred different libraries, resided in numerous dissimilar hotel rooms and, naturally, spent countless hours typing on my laptop. Do I regret it? Absolutely not; it was an utter joy. Along the way, I was ably assisted by many different people. In no specific order, they were . . .

Plus Ray and Helen Boyer, Peter Ciraolo, Carrie Salafia, Jeff Dalton, John McEwen, Erik Taros, Stephen Plotkin, the guy at the New York Public Library who ‘loves Rita Hayworth’, Lauren Daley (of the newspaper
South Coast Today
), and the many others who assisted me with my research and made me so very, very welcome during my stay in the USA. Special thanks must also go to the great Bob Boyer (of Sunset Records) who was a superb host/guide/assistant/friend, you name it, during the visit. Thank you all big time.

The same goes to the following who were there either to help or lend support in my project: my webmistress, Anne-Marie Trace (at www.keithbadman.com), Alan G. Parker (for help in putting the wheels of this book in motion), Mark Saunders (for his invaluable insight into air travel and political history), Richard Higgins and John Nolan (at ITN Source), Fred Rivers (in Hyannis Port), Mike Dalton, Wayne Allen (at Odeon Entertainment), Macundray Shukna, Dave Carter, Terry Rawlings, Fiona Early, Maxine Forrest, Lucinda MacGregor, Greg Schmidt, Spencer Leigh, Spencer Peet, Mick O’Toole, Ross Landau, Brian Luck, Stephen Rouse, Mick O’Shea and Tasha, Danny Wall, Michael Murtagh, Laurence Moore, Richard W. Irwin (at Reel Radio.com), Pete and Fenella Walkling, Tony and Sunny Dogra, and so many, many others, including the late, great Tom Keylock. I cannot list you all but you sure know who you are.

I am also indebted to the following.