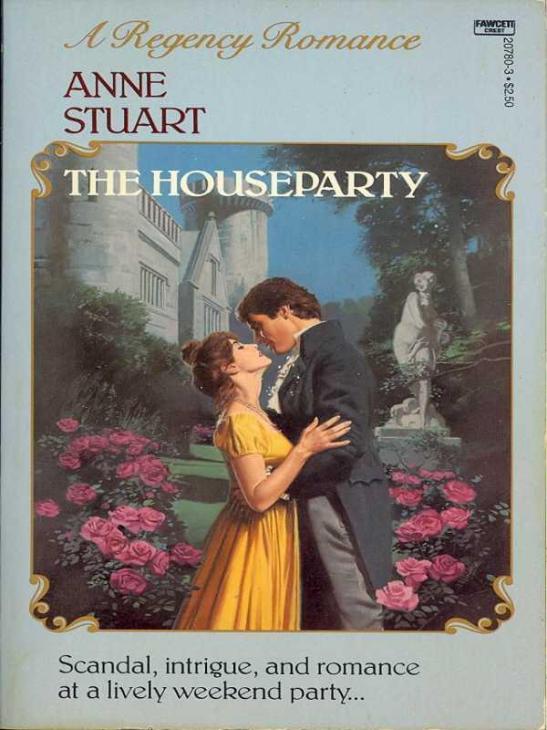 "I wonder if you could help me undo my dress. . . ."
The words faltered on Elizabeth's tongue.

The shadowed figure turned. It was, indeed, not the maid. It was Michael
Fraser.
A handsome devil, Elizabeth thought wildly as a wave of embarrassment washed over her.

"I beg your pardon," she breathed, her face flushed as she tried to pull the slipping gown around her. "I thought you were the maid."

"Obviously I am not." But there was a gleam in those dark blue eyes of his, and Elizabeth began to back away hastily. "Wait, Miss Traherne," he said as he caught her wrists, his cool, impersonal hands holding her prisoner and making her uncomfortably aware of just how helpless she was. "I believe you wished your gown undone." 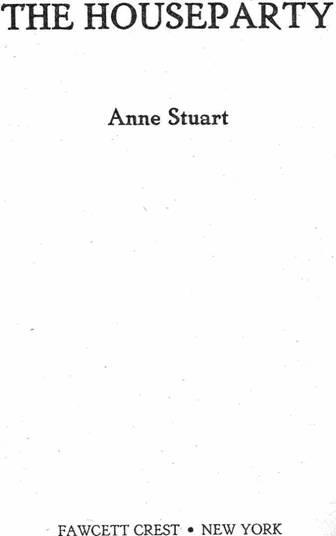 All rights reserved under the International and Pan-American Copyright Conventions.
Published in the United States by
Ballantine
Books, a division of Random House, Inc., New York, and simultaneously in Canada by Random House of Canada Limited, Toronto.

All the characters in this book are fictitious and any resemblance to actual persons living or dead is purely coincidental.

Manufactured in the United States of America.

It was a cool, sunny afternoon in late winter, and somewhere
in London two disparate gentlemen were meeting in an unprepossessing little room that may or may not have been part of the assorted offices necessary to the running of
a large
and disorderly regency. There were no paintings on the walls, but the desk between the two men was a massive piece of furniture reserved for those in power, and the troubled elderly gentleman who sat behind it stared with unseeing eyes at the cool, handsome face of the young man in front of him.

"I cannot like this situation, my boy," Sir Henry
Hatchett
was saying gruffly. "It ain't right to involve civilians in this sort of affair. No matter how careful we are, we can't control everything all the time. I gather Jeremy
Traherne's
brother and sister will be at Winfields for this
houseparty
."

"Surely we can count on them for assistance?" the younger man questioned swiftly.

"If we had to.
But you know Traherne would never forgive us if anything happened to his family. He's making sacrifices enough for the cause. As you are, dear boy. There's a limit to how much martyrdom the Crown has a right to demand."

The word the younger man used was short and satisfyingly blasphemous. "If you were to ask Jeremy, he would tell you, as I do, that it's hardly a case of martyrdom; it's more in the nature of a challenge. You haven't heard me complain, and you're not about to. I understand your reservations about this
houseparty
, but tell me, sir, do we really have any other choice?"

Sir Henry sighed. "I'm afraid not. We'll simply have to be very careful, very careful indeed. A great deal is riding on this, as you well know.
The work of a year, at the very least.
We simply cannot have it all go for naught."

Sir Henry eyed the coolly determined young soldier opposite him. "I would guess that you won't object too strenuously to having this over and done with, would you, lad?"

"I won't deny it's been damnably uncomfortable on occasion," he agreed with an unexpected flash of humor.
"Though I'd do it again if the situation warranted it."

"Aye, I'm sure you would. If it weren't for men like you and Jeremy Traherne, we'd have lost out to Bonaparte years ago."

The younger man dismissed the praise with a shrug. "Tell me, sir, do you have any reason to fear we might not succeed this time?"

"None at all," Sir Henry replied. "But I wish to hell it
were
over with. I won't rest easy until we have that scheming traitor brought to justice. When I think of the number of our lads who've lost their lives because of his vanity and greed, I feel frankly murderous."

"I don't blame you. But it shan't happen again. By this time on Monday our traitorous friend will be as harmless as . . . as Jeremy
Traherne's
sister."

Sir Henry allowed himself a small smile. "Obviously you haven't met the girl yet. According to Traherne, she's a real corker. I only hope she won't make matters more difficult. We can't afford to take her into our confidence, and I couldn't be responsible for her life if she were to find out what's going on at Winfields."

"Is there any reason she should?"

"Traherne says she's the very devil.
Bright, inquisitive, and far too pretty.
She was the one who found
LeBoeuf
, you know.
Damnable luck!"

"I gather Jeremy knows she and his brother will be involved, then."

"He knows. And he doesn't like it," Sir Henry said in his gloomiest tone of voice. "But he agrees with us; there's no way to avoid it. I only hope things work out as we've planned."

The younger man's expression was grim, and Sir Henry, watching it in the fading afternoon light, felt vaguely nervous.
And profoundly grateful that he was on their side and not that of the Corsican monster.

"They will," the young man said in a steely voice.

And Sir Henry had little doubt that they would.

"My dear Sumner," Elizabeth Traherne began in her well-modulated voice, "I still fail to see why we must spend the entire time with the squire. You know that his mother doesn't like us above half, and as for Cousin Adolphus himself, why, I am certain he invites us merely to puff up his own consequence and not for any desire for our lively company. Couldn't we possibly cry off this time?"

It was later that same afternoon on a winter's day, and Elizabeth had been so bold as to accost her brother in his
study at the drafty old parsonage. Of all the pleasant, well-lit rooms this was the most pleasant, and Elizabeth's brother had unhesitatingly chosen it
for his own
. The roaring fire filled the farthest corners with heat, the winter sunlight poured in the windows, and the book-lined walls provided a perfect background to her brother's elegant figure—a background he had cultivated deliberately.

The Very Reverend Sumner Traherne cast a disapproving look out of his large, melting blue eyes, craned his neck in an effort to appear magisterial, and made a reproving sound in his throat, which, though undeniably mellifluous, was somewhat reminiscent of a boar in rut.

"You are frivolous and ungrateful, Elizabeth," he said sternly, folding his well-shaped hands across his knee. "Cousin Adolphus invites us only for our pleasure and to show me some distinguishing attention. He was so condescending as to confide his wish that you, my girl, would receive some much needed brightening of your downcast spirits. He's fully aware of the strain of the last few months, without a word from Jeremy. And your finding that drowned French sailor down at
Starfield
Cove scarcely helped the tone of your spirits."

My Love Betrayed by April Lynn Kihlstrom
My Sister's Best Friend (Best Friends 3) by G.L. Snodgrass
Rash by Hautman, Pete
PureIndulgenceVSue by VictoriaSue
Rise of the Order by Trevor Scott
Red by Alison Cherry
Tablet of Destinies by Traci Harding
The Healing Power of Sugar: The Ghost Bird Series: #9 (The Academy Ghost Bird Series) by Stone, C. L.
Bringing Stella Home by Joe Vasicek
Back in the Lion's Den by Elizabeth Power