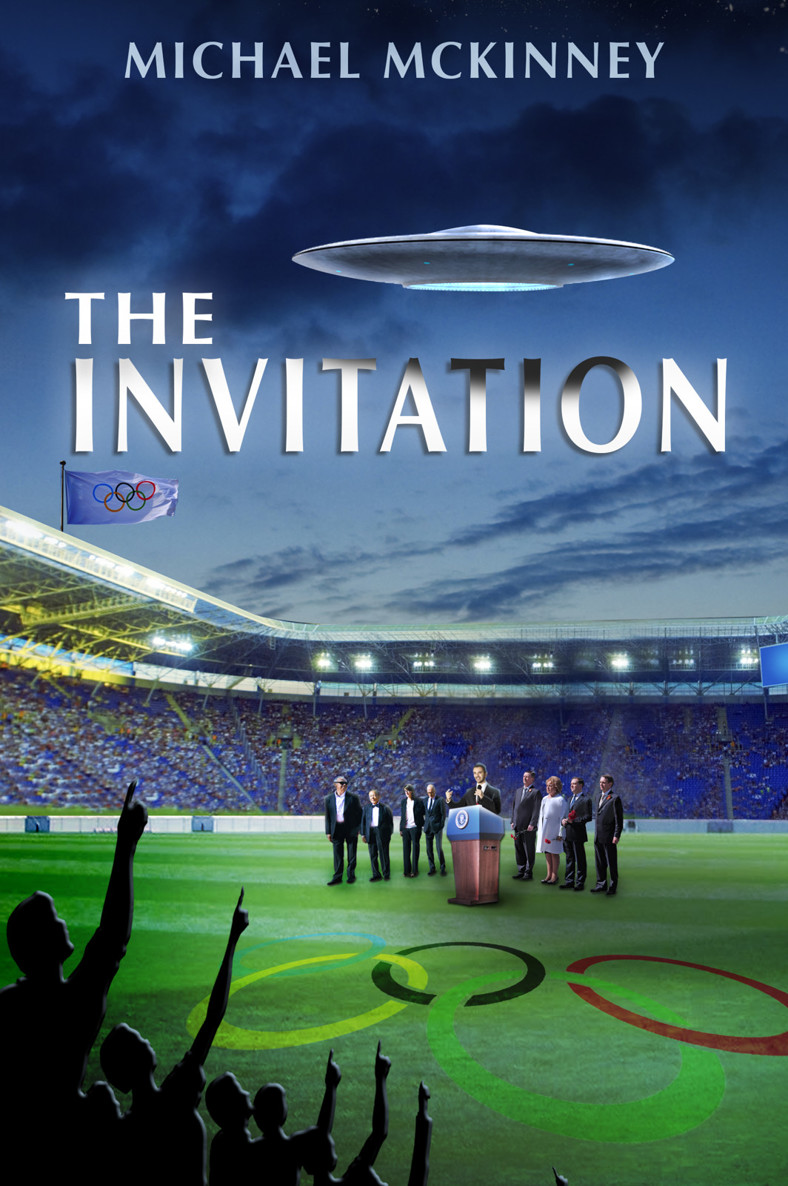 This e-book is licensed for your personal enjoyment only. This e-book may not be re-sold or given away to other people. If you would like to share this book with another person, please purchase an additional copy for each person you share it with. If you are reading this book and did not purchase it, or it was not purchased for your use only, then you should return to Amazon.com and purchase your own copy. Thank you for respecting the author's work.

Chapter One
- The Doctor’s Visit

Chapter Seven
- A Brain Scan of the President Reveals the Inexplicable

Chapter Ten
- The Trip to Miami

Chapter Fourteen
- The Morning After, and a Conspiracy is Born

Chapter Sixteen
- A Journey into the Future

Chapter Twenty
- A Promise to Each Other

On a warm, overcast morning in July, the start of another work day begins in the nation’s capital. The morning brings those familiar, daily routines, typical for many who live and work in a large metropolitan area. People going to their respective jobs, commuters in transit, and all the appointed scheduled regularity that surrounds modern life starts again, as Washington, D.C., like any other city, readies itself for a new day.

Washingtonians, long accustomed to seeing government vehicles carrying officials from place to place, barely notice the black limousine as it passes them in transit to its destination. Turning on to Reservoir Road, it arrives at Georgetown University Medical Center, and slowly makes its way to the back entrance of the hospital. After stopping, two men quickly emerge and take their positions flanking the entrance door. Moments later a woman comes out to greet the expected visitor. As the back door of the limousine opens, an elegantly dressed figure is greeted and ushered into the hospital, preceded by a member of the security team. Once inside the building, their short walk is punctuated with amiable greetings from well-wishers, and the celebrated visitor reciprocates in kind. After entering an office room she is told that Doctor Phelps is on his way. As she sits waiting, her thoughts are edgy and more than a little apprehensive, contemplating what the Doctor will say to her. As the door swings open, the avuncular smile and familiar voice of her trusted physician reassures her.

“Thank you, that’s very kind. I hope you don’t mind me coming to see you like this. It’s more confidential.”

“Not at all, whatever you’re comfortable with.  Well, Mrs. Myers, we found nothing abnormal in any of the tests we ran on you. You’re perfectly healthy.”

“We still haven’t found out why you can’t conceive.”

“Hmm…So where does that leave us?”

“Are you asking my personal opinion?”

“Mrs. Myers, Your case is very unusual. You’re married to the President of the United States. I can’t think of a more stressful job. He has to be preoccupied. He seems to be everywhere. It’s a wonder you have any time together at all. Here’s what it comes down to. There are only two sides to this equation, you, and your husband, and as far as I can determine you’re in excellent health.”

“So is my husband, Doctor. He’s been healthy all his life.”

“Have you ever considered artificial insemination?”

“That’s out of the question, Doctor. If it became known that we couldn’t conceive naturally, it would reflect badly on the President. I simply won’t put him through that.”

“I understand. You could adopt.”

“It would set a wonderful example.”

“I know that, but I want to have a child with my husband. Does that sound selfish?”

“There’s another reason I want us to conceive.”

“I have an intense curiosity to see what our child would be like. I mean, what traits he would inherit. My husband must have perfect genes. He amazes me sometimes.”

“About three months ago I was walking by the library. It was late, around midnight. I heard music. I looked in and saw him playing the violin. It was beautiful. I had no idea he had that skill. I’ve been married to ̓him for years, and that was the first time I heard him play.”

“Did you ask him about it?”

“He said he learned in college. What he was playing was very complicated. How do you do that?”

“He has the most impressive intellect I’ve ever encountered. Genes like that should be passed on. I mean it. I would bear him as many children as possible. I would.”

“Well, I’m sure you’d be happy with one right now. Has your husband had a physical lately?”

“About five months ago, everything checked out normal.”

“When is the last time you both had a weekend just to yourselves?”

“It’s been a while. Three or four months ago, maybe more.”

“What I think you need to do is to take the time, not try to find the time, take the time for both of you to be together, and be patient. That’s my advice. And remember, those tests could’ve revealed a problem. They didn’t. You’re a healthy woman. That’s a positive outcome.”

“I know. Okay, I’ll take your advice Doctor. Thank you for your encouragement.”

“It’s my pleasure, Mrs. Myers. I’ll walk you out, unless you have any other questions.”

“You have my office, and my home number. Please call me anytime if you have any questions or concerns.”

Both rise to leave, and within three minutes the First Lady is escorted out of the building and into the waiting limousine. Seconds later the car, and its occupants, are driven away.

As the First Lady grapples with her personal dilemma, her husband occupies himself with the ongoing demands of national governance. In his fourth year as President, Kenneth Myers has an approval rating of over seventy percent, and seems poised to easily win reelection. The respect and affection that millions of Americans feel for him is genuine. A powerful speaker, his persuasive oratory has an almost hypnotic appeal for the American people. As popular as he is at home, he’s even more celebrated abroad. When he spoke to European parliaments on a goodwill tour in the second year of his administration, his mastery of language was impressively displayed. Fluently speaking in French, German, Spanish, and Italian, his power to communicate with masses of people is unequaled.

Despite his popularity, he is not without critics. A vocal minority of mostly conservative politicians regard both him, and his policies, as being somehow inimical to the nation’s best interest. Pushing for development of solar energy, he staunchly opposes all forms of nuclear power whether used for weapons or energy production. Those in both government and private industry who see his position as threatening to their self-interest view him as obstinate, averse to compromise, and even dangerous. His unabashed egalitarian political leanings became evident early on when he pushed through Congress additional laws providing new benefits and protections for millions of average working Americans. Coupled with legislation that effectively curbs the influence of corporate money on the political process, his push for more ethical government is lauded by a strong plurality of public opinion. The core element of his support derives from the fact that most Americans regard his programs and policies as eminently sensible, and beneficial to the country. It’s this that keeps in check, at least for now, the desire by some to see his political fortunes fall by any feasible means.

As the black limousine turns into the driveway at 1600 Pennsylvania Avenue, returning the First Lady from her appointment, we find the President on the phone trying to persuade an undecided Senator to vote for the upcoming energy bill.

“Senator Clayborn, How are you today? Good, I’m glad to hear that. Senator, I want to express my condolences to you, and the people of your state for what you’ve been through, and let you know the federal government is ready to do whatever we can to help you rebuild. Uh huh.  The latest report I have is that all fire should be extinguished by next week.  That rain was a blessing, wasn’t it? Absolutely. Senator Clayborn, as you know the energy bill comes up next week. I’m not asking you to commit yourself, but I would like to tell you why I support it, if you’ll grant me that…Well, in essence, this bill provides the incentive for every household to produce, at least in part, its own energy. Literally all domestic power will eventually become self-generated. That’s right. It will revolutionize energy production in this country. Energy storage technology is the last piece of the puzzle. With that we have complete energy independence…Uh huh. Well, you and I both know there are powerful interests who want to keep energy production a centralized monopoly. That doesn’t serve the public good anymore.  I understand that. Yes, but if this bill passes, millions of families in this country will in time see their power bills come down dramatically. That’s money that will find its way back into the general economy. It sounds like a win-win proposition to me.…I understand. Yes, well, thank you Senator, for hearing me out…Yes, you too. Goodbye.”

As President Myers continues to garner support for his legislative agenda, not far from the White House in an office at the Federal Bureau of Investigation, the Director of the FBI, Frank Slaughter, is reviewing a number of low-profile cases. Periodically assessing all of them to determine whether any might warrant a change in status, he pauses when he comes to the file of Phillip Garrett.

The case of Phillip Garrett is something of an oddity. For the past two years Mr. Garrett has been making public statements about the President that most regard as simply ludicrous, suggesting that he’s an impostor, possibly an agent for a an unnamed foreign government with hostile intentions. Once a roommate with the President when they were in college, he alleges that Ken Myers is someone very different than who he claims to be. Inclined to dismiss Mr. Garrett as someone who is not tightly hinged, the FBI relegated his case to low priority, but his persistent claims, mostly in the form of writing to government officials, has provoked renewed attention to his case. Mr. Slaughter has already decided to gather as much information as possible about Phillip Garrett, and what his real motivations are. As he peruses the file on him, the knock on the door signals the arrival of field agent Tim Colby, Mr. Slaughter’s choice to handle the case.

Crazy Nights (The Barrington Billionaires Book 3) by Danielle Stewart
The Vampire's Consort (Undead in Brown County) by S.J. Wright
A Perfect Heritage by Penny Vincenzi
A White Heron and Other Stories by Sarah Orne Jewett
The Alchemists: Three Central Bankers and a World on Fire by Irwin, Neil
The Firebrand by Marion Zimmer Bradley
Get Bent by C. M. Stunich
When Dove Cries by Beth D. Carter
Sleeper by Jo Walton
Lion of Ireland by Morgan Llywelyn