Read The Kennedy Brothers: The Rise and Fall of Jack and Bobby Online

The Kennedy Brothers: The Rise and Fall of Jack and Bobby 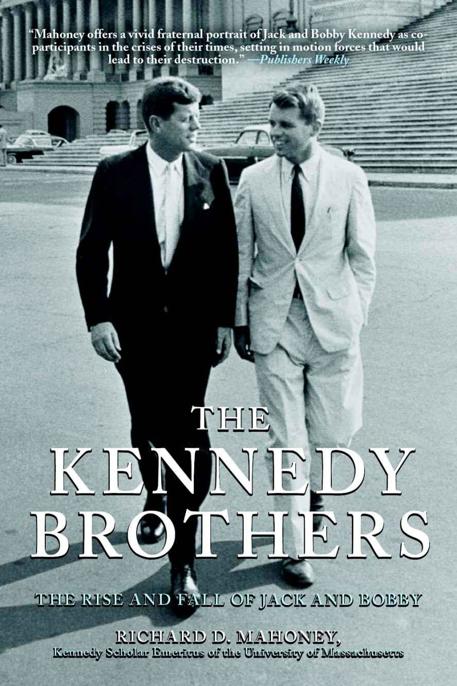 The Rise and Fall of Jack and Bobby

All Rights Reserved. No part of this book may be reproduced in any manner without the express written consent of the publisher, except in the case of brief excerpts in critical reviews or articles. All inquiries should be addressed to Arcade Publishing, 307 West 36th Street, 11th Floor, New York, NY 10018.

Arcade Publishing
®
is a registered trademark of Skyhorse Publishing, Inc.
®
, a Delaware corporation.

The Kennedy brothers : the rise and fall of Jack and Bobby / Richard D. Mahoney. p. cm.

“But sometimes in the middle of the night, their wound would open afresh. And suddenly awakened, they would finger its painful edges, they would recover their suffering anew and with it the stricken face of their love.”

M
y association and friendship with the exceptional staff, past and present, of the John F. Kennedy Library have made this book possible. Megan F. Desnoyers, William Johnson, Suzanne K. Forbes, Jo August, Sheldon Stern, John Stewart, Alan Goodrich, Jim Cedrone, Dan Fenn, and William W Moss made the going bearable and, at points, even easy. They of course bear no responsibility for the result. My selection in 1987 as the John F. Kennedy Scholar by the Kennedy Library and the University of Massachusetts at Boston enabled me to do much of my research for this book.

I should also thank the staffs of the National Archives and Records Services, the Library of Congress, the FBI records office in Washington, D.C., the Adlai E. Stevenson Papers at Princeton University, the Chicago Crime Commission, and the Centro de Estudios Sobre America in Havana.

Among those who read portions of the manuscript along the way, made useful suggestions, and always encouraged to me to push on: Donavon Ostrom, Paul Erickson, Stanley Sheinbaum, Bill Gilliam, Chenoweth Moffat, Grant W. Johnson, Mary Jo West, and my sisters Noel Shambayati, Eileen Mahoney, and Mary Mahoney. My mother, Alice D. Mahoney, as always, provided criticism, insight, and the indispensable service of taking care of my daughter, Molly.

Among Kennedy friends and lieutenants who were especially helpful: Dolores Huerta, Harris Wofford, Angela Novello, the late W. Averell Harriman, the late George W. Ball, the late Kenneth P. O’Donnell, the late David F. Powers, the late Lord Harlech, the late Edmund A. Gullion, and the late Cesar Chavez. There are those in Havana and Miami for whom printed recognition would imperil their persons, but who provided information and guidance in this project. I thank them as well.

Without my father’s friendship with the Kennedys and his attentive support for each of his nine children, including myself, I would not have attempted this journey. Without the unusual skill and grace in execution of my editor, Timothy Bent, I would not have completed it.

M
y father was a friend of Robert F. Kennedy and an ambassadorial appointee of John F. Kennedy. He, and consequently the rest of our large Irish-American family, admired the Kennedys uncritically, a sentiment that was reinforced by the nature of their deaths. One of the last things Robert Kennedy did on June 5, 1968, in his suite at the Ambassador Hotel in Los Angeles before going downstairs to accept victory in the California primary was to make a list of friends he wanted to call when he got back to his room later that night. Among them was my father.

In March 1974, when I first went to the Federal Records Center in Waltham, Massachusetts, which then housed the Kennedy papers, I did so more in the manner of a pilgrim than a scholar. I was a member of the faithful, looking for evidence, even relics, of the blessed era. I would sit for hours in the poorly heated research room reading JFK’s office files and the oral histories of RFK’s brief run for the presidency six years earlier. I became friends with the late Dave Powers, then curator of the Kennedy Library, who had been Jack Kennedy’s best friend. I would often drop by his office in the late afternoon and listen to him tell stories about the Kennedy brothers, Jack in particular. The figures Powers evoked fit my family’s conception of them — men full of wit, charm, and purpose who, in those Watergate years, seemed nothing less than heroic.

Yet scholarship was beginning to offer a second, far harsher evaluation of the Kennedys. President Kennedy, some scholars charged, was responsible for bringing America into the nightmare of Vietnam. Other scholars claimed that Attorney General Robert Kennedy had, for reasons of political expedience, done the minimum on civil rights. I decided that I would take a look for myself at an area of the Kennedy record that had not yet been analyzed — the Kennedy administration’s policy in Africa, where I had spent part of my youth.

Over the years, I became a familiar figure to the staff of the Kennedy Library. Much of my first book,
JFK: Ordeal in African,
published by Oxford University Press in 1983, was based on what I found in the National Security Files, which the library staff had effectively declassified. Between 1974 and 1980, I also did 223 oral history interviews. These encounters opened doors that led to unexpected places. I remember a winter day in 1976 in Princeton, New Jersey. At the conclusion of an interview with the late George Ball, undersecretary of state during the Kennedy years, he invited me to have a look at his transcribed telephone conversations, about ten thousand in number. For three weeks, I read through those telephone conversations in Ball’s home, often leaving at daybreak and then returning a few hours later.

I was stunned by what they revealed. The picture they painted of the Kennedys was very different from the treasured anecdotes, those memorable and canonized speeches, or the top-secret memos covering “policy options.” What emerged first were traits common to powerful men — expediency, calculation, and manipulation. But the transcriptions also revealed other qualities that were, I came to believe, unique to the Kennedys — an icy wit, an awareness that they were players on a stage, and a capacity for growth nurtured by their constant collaboration. Depending on the conversation, they could be idealistic or Machiavellian, utterly conventional or suddenly imaginative, hot or cold. The Kennedy brothers seemed neither as grand and omniscient as the “court histories” that sprang up after the president’s assassination portrayed them, nor as cunning and shameless as later books, such as Seymour Hersh’s
The Dark Side of Camelot
, argued. They were both self-creative and self-destructive.

I began to question the standard portrait of the male Kennedys as a perfectly functioning juggernaut. That Jack, Bobby, and their father, Joseph P. Kennedy, worked as seamlessly and relentlessly as a combat unit on their path to power seemed true. That Bobby, as executor of his father’s fearsome will and facilitator of Jack’s ambition, was the key actor in the triumvirate seemed obvious. But I heard accounts of tensions among them. Former Arizona senator Barry Goldwater, another friend of my father, told me that Bobby, in his crusade to destroy the American Mafia in the McClellan Committee investigation in the late 1950s (a committee on which Goldwater served), had stumbled over evidence of his father’s dealings with the underworld. “It just killed him,” Goldwater recalled. I wondered what other kinds of combustion Bobby’s moral ambitions had touched off, both within and without the family.

In 1987 I was appointed the John F. Kennedy Scholar at the University of Massachusetts and the Kennedy Library. I spent a year lecturing, writing, and organizing symposia at the Kennedy Library. Revisionary analysis of the Kennedy years had shifted once again, this time to “character issues.” Private sins were said to be revealing of the Kennedys’ deficient public character. I gave a lecture in which I suggested that the Kennedy story might simply be a projection of America’s own unresolved self-concept, its continuing pretense of politics as redemption. The Kennedys had become, I argued, “caricatures of our unsettled national psyche.” They were “warped mirror-images of our own hopes, doubts, and indulgences.” Thus they could only be saints or scoundrels, disinterred on occasion to reflect some current need to moralize to the body politic. I believed then and believe today that at the base of this tendency is America’s inability to see its history as tragedy: to recognize, even embrace, the incompleteness of its ideals and its own struggle against doubt and violence. Perhaps by facing this we could come to a cathartic and settled view of ourselves and the Kennedys. “Tragedy,” Bobby Kennedy said during his run for the presidency in 1968, “is a tool for the living.” But we have found no such tool, and our literalness has rendered the Kennedys unrecognizable, even ahistoric. Something in their story was missing.

07 Uncorked - Chrissy McMullen Mystery by Lois Greiman
After Death by D. B. Douglas
Calculated Risk by Elaine Raco Chase
The Codex: An Angel's Guide To Seducing A Human by Joe Duck
No Fond Return of Love by Barbara Pym
Just the Man She Needs by Gwynne Forster
R is for Rocket by Ray Bradbury
The Girl in the Garden by Nair, Kamala
Blackvine Manor Mystery by Wendy Meadows
The Learning Curve by Melissa Nathan