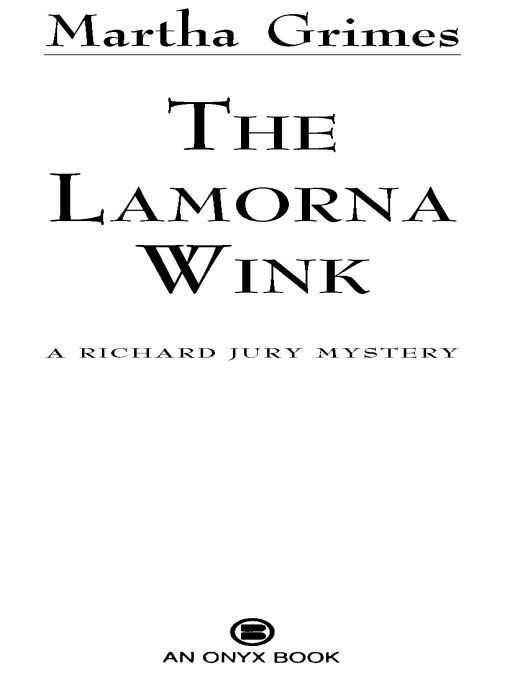 Table of Contents
Title Page
Copyright Page
Dedication
Â
PART I - Do You Remember?
Chapter 1
Chapter 2
Chapter 3
Chapter 4
Chapter 5
Chapter 6
Chapter 7
Chapter 8
Chapter 9
Chapter 10
Chapter 11
Chapter 12
Chapter 13
Chapter 14
Chapter 15
Chapter 16
Chapter 17
Chapter 18
Chapter 19
Â
PART II - A Dealer in Magic and Spells
Chapter 20
Â
PART III - Blessings and Curses
Chapter 21
Chapter 22
Chapter 23
Chapter 24
Chapter 25
Chapter 26
Chapter 27
Chapter 28
Chapter 29
Chapter 30
Chapter 31
Chapter 32
Chapter 33
Chapter 34
Chapter 35
Chapter 36
Chapter 37
Chapter 38
Chapter 39
Chapter 40
Chapter 41
Chapter 42
Chapter 43
Chapter 44
Chapter 45
Chapter 46
Chapter 47
Chapter 48
Chapter 49
Chapter 50
Chapter 51
Chapter 52
Chapter 53
Â
PART IV - Stella by Starlight
Chapter 54
Chapter 55
Chapter 56
Chapter 57
Chapter 58
Chapter 59
Chapter 60
Chapter 61
Chapter 62
Â
PART V - The Uninvited
Chapter 63
Chapter 64
Chapter 65
Chapter 66
Chapter 67
Praise for
The Lamorna Wink
. . .
Â
“There's more than the normal amount of hocuspocus in Ms. Grimes's latest tale. . . .
Swift and satisfying
. . . grafts the old-fashioned âGolden Age' amateur-detective story to the contemporary police procedural . . .
real charm
.”
â
The Wall Street Journal
Â
“
Fans of the Jury series will not be disappointed.
The eccentrics who populate Plant's life are back and provide wickedly funny cameos.”
â
USA Today
Â
“Another atmospheric entry in
an elegantly styled series
. . . . Melrose Plant, the congenial aristocrat . . . picks up the slack for Richard Jury. . . . Although Plant is man enough to face the implications of this sad story,
it's good to have Jury around at the end
.”
â
New York Times Book Review
Â
“
As consuming as its 15 predecessors
. . . . Grimes fans will be particularly intrigued as Melrose contemplates his childhood, revealing more about his complex personality than ever before.”
â
Publishers Weekly
(starred review)
Â
“The greening of Melrose Plant . . . rampant complications, tear-away subplots, until, at virtually the last moment, Jury rides in . . .
[a] highly popular series.
”
â
Kirkus Reviews
Â
“Fans will demand this.”
â
Library Journal
More praise for
The Lamorna Wink
. . .
“With each novel, her characters have taken on more humanity, depth and compassion, with no diminution of the British-style wit for which she is famous. . . . This very English mystery is
a very entertaining romp
through the Cornwall countryside. . . .
The Lamorna Wink
is one more in the series of Ms. Grimes's great pub names.”
â
Dallas Morning News
“
The characters are fun and the story line a gripper.
Somebody should really grab it for a film.”
âKing Features Syndicate
“Grimes's prose is
supple and witty
, and she has a way with characters.”
â
Los Angeles Times
“
A charming, delightful addition to the series.
Grimes captures the flavor of British village life. . . . She fleshes out her characters with witty dialogue. . . .
Long may she write Richard Jury mysteries
.”
â
Chicago Tribune
“
Spookily atmospheric
. . . . A richly textured series.”
â
Seattle Times
“
Entrancing
. . . . Grimes makes her own mark on du Maurier country with two murders, a double drowning, a serpentine plot and a killer as cold-blooded as a snake.
The Lamorna Wink
is . . . the latest in her
intelligent, witty
series featuring Scotland Yard's Richard Jury. This one is in atmospheric Cornwall, and its odd name proves especially appropriate for Grimes's sly sleight-of-hand.”
â
Orlando Sentinel
Praise for the previous novels of
Martha Grimes . . .
Â
“Her wit sparkles, her plots intrigue, and her characters are
absolutely unforgettable.
”
â
Denver Post
Â
“
She really has no superior in what she does
. . . .
Grimes's books are powerful comedies of nomanners,
of the assumed gap between the blueblooded
and the red-blooded people. . . . Her
people are delineated in Hogarthian outlines,
vitalized by Dickensian gusto, but characterized
by a detached humor and understanding that
make them distinctly and exclusively
Grimesian. . . . Her world is enriched by every
new novel and our admiration grows.”
â
Armchair Detective
Â
“Martha Grimes, America's answer to the classical British detective novel, is winning the hearts of readers who long to return to the golden age of the dagger beneath the tea cozy and the butler lurking at the drawing-room door.”
â
San Francisco Chronicle
Â
“
A class act
. . . . She writes with charm, authority, and ironic wit.”
â
Kirkus Reviews
Â
“The spirit of Christie, Allingham, and Sayers lives on.”
â
Los Angeles Times
ALSO BY MARTHA GRIMES
The Man with a Load of Mischief
The Old Fox Deceived
The Anodyne Necklace
The Dirty Duck
Jerusalem Inn
Help the Poor Struggler
The Deer Leap
I Am the Only Running Footman
The Five Bells and Bladebone
The Old Silent
The Old Contemptibles
The End of the Pier
The Horse You Came In On
Rainbow's End
Hotel Paradise
The Case Has Altered
The Stargazey
Biting the Moon
Â
POETRY
Â
Â
Â
Send Bygraves

REGISTERED TRADEMARKâMARCA REGISTRADA
Â
Without limiting the rights under copyright reserved above, no part of this publication may be reproduced, stored in or introduced into a retrieval system, or transmitted, in any form, or by any means (electronic, mechanical, photocopying, recording, or otherwise), without the prior written permission of both the copyright owner and the above publisher of this book.
Â
PUBLISHER'S NOTE
This is a work of fiction. Names, characters, places, and incidents either are the product of the author's imagination or are used fictitiously, and any resemblance to actual persons, living or dead, business establishments, events, or locales is entirely coincidental.
BOOKS ARE AVAILABLE AT QUANTITY DISCOUNTS WHEN USED TO PROMOTE PRODUCTS OR SERVICES. FOR INFORMATION PLEASE WRITE TO PREMIUM MARKETING DIVISION, PENGUIN PUTNAM INC., 375 HUDSON STREET, NEW YORK, NEW YORK 10014.
Â
eISBN : 978-1-101-11932-7

To my cousins, Joanna and Ellen Jane
and in memory of George and Miles
Oh!
My name is John Wellington Wells, I'm a dealer in magic and spells, In blessings and curses, And ever-filled purses, In prophecies, witches, and knells.
âGilbert & Sullivan,
The Sorcerer
PART I
Do You Remember?
1
S
till wearing his cabby's capâhe ought to put it in his act, this cap, because it looked so unlike what a magician would wearâJohnny was sitting at the gaming table palming cards. He brought the Queen of Hearts to the top of the deck again and again, as if it were marching right up there of its own volition.
It was dead simple; it always astounded him that people couldn't suss it out. Magic was kind of like murder or like a murder mystery: distract, dissuadeâthat was the way. Put a clue here and at the same time call attention to something quite different over there. The way a magician uses his hands. Keep looking at one hand and so will your audience. This leaves the other hand free and offstage.
He shut his eyes and leaned his elbows on the gaming table. Except for the trunk that sat in the window alcove behind him, the gaming table was the most interesting piece of furniture in the cottage. His Aunt Chris had inherited it, along with a few other pieces, from her own aunt's estate. It was fascinating; it gave the place that “Vegas look,” Chris was fond of pointing out. The table was large and round and covered in green baize. All around it were small drawers in which you could keep cards, chips, or whatever.
ADS
15.4Mb size Format: txt, pdf, ePub