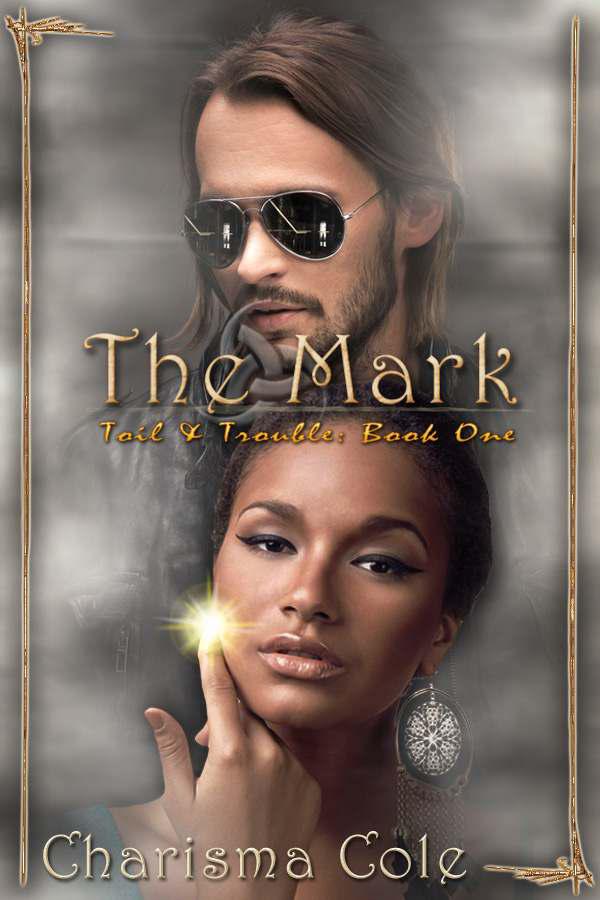 Toil and Trouble: Book One

Jade Murray is a necromancer, a witch that can communicate with the dead. After a run of the mill summoning goes haywire, it sets off a double murder with one thing connecting the gruesome acts: Jade.

To clear her name and avoid the Watchers on her tail for crimes against humanity and the magical community, she'll have to enlist the help of her vampire boyfriend, a fairy with a penchant for blood, and her neurotic mother.

Will they find the real murderer before it’s too late?

Also available by Charisma for the Kindle:

Kendra and Scott (One Night Stand: 1)

This ebook is licensed for your personal enjoyment only. This ebook may not be re-sold or given away to other people. If you would like to share this book with another person, please purchase an additional copy for each person you share it with. If you're reading this book and did not purchase it, or it was not purchased for your use only, then you should return to an online retailer and purchase your own copy. Thank you for respecting the author's work.

Chapter One: A Summoning to Remember

Chapter Two: Temptation is Good for the Soul

Chapter Three: Ink, and Blood, and Fairies…Oh My!

Chapter Eight: Handler for a Night

Chapter Eleven: The Mark of the Cursed

Chapter Twelve: Making up is Hard to do

Chapter Fourteen: Shop Away the Pain

Chapter Fifteen: The More the Merrier

Chapter Seventeen: Blast From the Past

Chapter Nineteen: The One he Chose

Chapter Twenty-Three: How They Met

Chapter Twenty-Seven: He Loves Me

A Summoning to Remember

The ghost licked his bruised lips, popping the collar of his overpriced polo. The Cartier at his rest had lost its brilliance, but his bleached white teeth gleamed with desire. Yuck.

Most who believe in ghosts think they’re these foggy apparitions that move stuff across rooms and make spooky noises; or they’re at the other end of an Ouija board, a connection to the other side. They’re partly right. Seasoned ghosts or those with a grudge can cause quite a ruckus with physical objects. But as far as appearances go, ghosts look awfully close to the way they did in life, even down to rocking the same clothes they wore when they met their end. Most have the stereotypical parlor, but nothing freakishly supernatural--they just look like they would benefit from a bottle of self-tanner. And when it comes to contacting a ghost, don’t waste your hard earned money on a board game. The only way someone can really have a sit-down with a dead person is through a true necromancer--a witch that is born with the gift to see and communicate with the dead. Like me.

I flipped a mess of mahogany hair over my shoulder, stepping closer to the line of salt that was drawn, but still at a safe distance. Ectoplasm was a bitch to get out of clothes.

“Oh, honey bunny,” I cooed with a saccharine smile. “I miss you so much I can barely stand it, Brooksy.“ I gripped my neck and let my hands trail slowly down my throat, hovering near the opening of my skin tight dress. Instantly, his pale blue eyes widened in anticipation.

You’re just roleplaying
, I thought to myself as a pang of nausea hit me.
It’s not like he even sees you
. And it was the truth. A little spell work and necromancers can control what ghosts see as well, kind of like a glamour. My glamour was based on his favorite piece of tail on the side—Candi Wilson. In his eyes, my ebony skin appeared pasty white. My shoulder length, kinky locks now flowed in stick thin waves down my equally stick thin back. Well not my back--I never got the appeal of a man being able to see all the bones in my body. I wore my curves proudly when I wasn’t on the clock. When I was on said clock, I was a witch and I used my special skills in necromancy for the Necromancy and Communicating Agency, or NACA. Those skills meant I used my ability to see and communicate with dead people to deal with those in the beyond. It wasn’t without its risks, ghosts could become unruly even violet. And when they think, it comes out in images that flood my mind. Sometimes it was sweet things, like memories with loved ones they left behind, other times it was…not so sweet.

“Oh what I would give for one more night with you, baby,” the ghost said, sighing with longing. “I need you, kitten.”

“My life is an endless ocean of sadness and loneliness,” I continued dramatically. “And things have been hard lately. Really hard.”

The ghost took a step closer. “What’s going on?”

I looked down at the tacky white patent pumps I’d put on for the occasion. “I lost my job over at Macy’s.”

I could barely say the last bit with a straight face. When I scoped out the other woman’s place of employment after I accepted the gig, Candi was so obviously made for the job that I was in awe. From the way she held the glass bottles like they were precious treasures to the cavity inducing sweetness of her smile and southern twang, I had a feeling as long as she didn’t develop a habit of clocking in late, she had a job for life.

“You got canned?” the ghost said in disbelief, stepping even closer to the barrier. “What happened?”

“I…” My mouth hung agape as I mentally slapped myself. In a rush to schedule my first client in several weeks, I hadn’t even thought up a back story or researched her contacts at the company. Magic is most powerful on the full moon, and since there’s usually one full moon a month, I should have been more prepared.

It was cockiness, I guess. My boss, Brontes, who rarely gave out any sort of compliments or encouragement, finally admitted that my glamours were the best he’d seen in decades. It may have gone to my head a smidge, considering the fact that I barely had to break a sweat to create a solid façade. My usual work routine consisted of popping a button or two and the location of the ghost’s hidden treasure or any other information that I wanted to know came spilling out.

But this ghost apparently talked to his mistress. Just my luck.

“Yeah,” I corrected smoothly. “She got kinda grabby. But I told her I was all yours Brookey, baby. Even in death, I’m all yours.”

The ghost’s brow furrowed in confusion. “That born again psycho that always gives customers an earful about how great Jesus is?”

“Yeah,” I said, shaking my head like it was the greatest tragedy ever conceived. “She had us all fooled.”

I swayed as a rush of images bombarded me, a mad torrent of thoughts flowing from the ghost. He was picturing Candi and this Stacy doing some very unholy things.

I glanced at the Mickey Mouse watch at my wrist. I only had five more minutes. If he didn’t spill soon, I’d have to wait until the next full moon to summon him. Goodbye bonus. “So that’s why I came to this agency,” I continued, trying to get us back on track. “I saw their commercial while I was watching Lifetime the other night and decided I’d give them a call.”

“And I wouldn’t have bothered you if it weren’t really important,” I added. “If I didn’t really need the money.”

“Well shit,” he said crossing his arms. His face went serious as he took another step forward. He grimaced as his body hit the invisible wall that barred him from coming any further. “You haven’t blown through all the money, have you? My body’s not even cold.”

“Of course not,” I said indignantly, giving him a pout. “Hell, I don’t even know where the money is.”

“What?” he snapped, anger spreading across his face.

I winced as his outburst rung in my ear. Imagine the emergency alert signal and fingernails against a chalkboard and multiply that by ten. For a guy that had only been six feet under a little over two weeks, he was already packing quite a punch.

“Sorry,” he said, his face softening. His penny loafers squished around the circle as he paced back and forth, lost in thought. “You went to Kenny, right?”

“Yeah, I saw your lawyer,” I lied, nodding eagerly. “He told me the only way I’d get the money was if I’d…” I stopped, clasping my hand over my mouth. What the hell was I doing? We were never, ever supposed to mention outside mortals that ghosts could go shooting for.

“That son of a BITCH!” the ghost roared, grinding his fists. He was imagining beating the guy to a bloody pulp. He was thinking about taking his fist and putting it right up-

This is bad
, I thought frantically, wringing my hands. The last necromancer who slipped up and name dropped was tried and convicted for the murder in the Great Hall. She’d told the ghost that his brother had been sleeping with his wife. Instead of going back to the All, the places ghosts go when they die, the ghost pulled some strings and looked up his brother instead. The ghost haunted and hounded his brother until the poor guy finally ended it, by putting a .45 in his mouth.

I swallowed hard, making a mental note to google the lawyer and make contact. If he had a visit from Casper the Unfriendly Ghost on my account, it was the least I could do. I didn’t want anyone’s blood or mental instability on my hands.

Unbreak My Heart by Hill, Teresa
You Can't Make This Up: Miracles, Memories, and the Perfect Marriage of Sports and Television by Al Michaels, L. Jon Wertheim
Who We Were by Christy Sloat
Fire in the Firefly by Scott Gardiner
The Criminal by Jim Thompson
All Is Bright by Sarah Pekkanen
Shallow Love by Georgia Mantis
Thorn by Sarah Rayne
The Haunting at Grays Harbor (The River Book 8) by Michael Richan
Chosen (Part I) by Clark, Emma