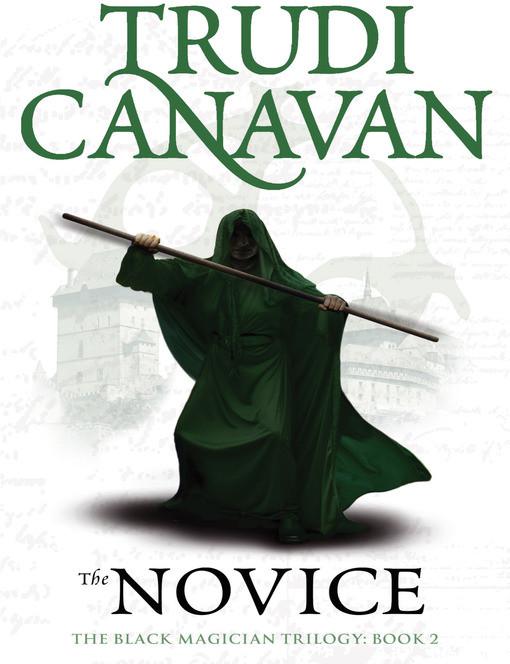 This book is dedicated to my mother, Irene Canavan,

who always said that, with hard work and

determination, I could be anything I wanted to be. 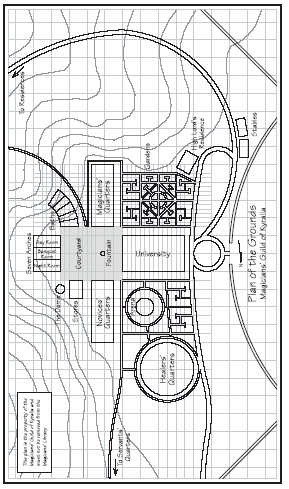 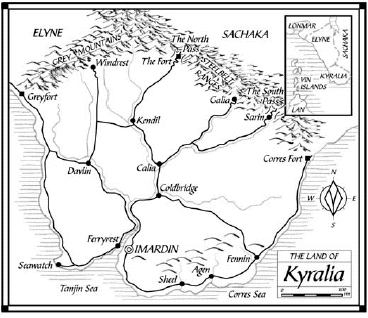 PART
ONE
1
The Acceptance Ceremony

For a few weeks each summer, the sky over Kyralia cleared to a harsh blue and the sun beat down relentlessly. In the city of Imardin, the streets were dusty and the masts of ships in the Marina writhed behind the heat haze, while men and women retreated to their homes to fan themselves and sip juices or—in the rougher parts of the slums—drink copious amounts of bol.

But in the Magicians’ Guild of Kyralia these scorching days hailed the approach of an important occasion: the swearing in of the summer intake of novices.

Sonea grimaced and tugged at the collar of her dress. Though she had wanted to wear the same simple, but well-made clothes she had worn while living in the Guild, Rothen had insisted that she needed something fancier for the Acceptance Ceremony.

Rothen chuckled. “Don’t worry, Sonea. It will all be over soon and you’ll have robes to wear—and I’m sure you’ll get sick of those soon enough.”

His eyes brightened with amusement. “Really? You don’t feel even a little nervous?”

“It’s not like the Hearing last year.
That
was wild.”

“Wild?” His eyebrows rose. “You
are
nervous, Sonea. You haven’t let that one slip in for weeks.”

She gave a small sigh of exasperation. Since the Hearing five months earlier, when Rothen had won the right to be her guardian, he had given her the education that all novices must attain before starting at the University. She could read most of his books without help, and she could write, as Rothen put it, “well enough to get by.” Mathematics had been harder to grasp, but the history lessons were fascinating.

During those months, Rothen had corrected her whenever she spoke a word of slum slang, and constantly made her rephrase and repeat herself until she sounded like a lady of a powerful Kyralian House. He warned her that the novices would not be as accepting of her past as he was, and she would only make things worse if she drew attention to her origins every time she spoke. He had used the same argument to persuade her to wear a dress for the Acceptance Ceremony, and though she knew he was right, it did not make her feel any more comfortable.

A circle of carriages came into view as they reached the front of the University. Beside each stood a set of primly dressed servants, all wearing the colors of the House they served. As Rothen appeared they turned and bowed to him.

Sonea stared at the carriages and felt her stomach turn over. She had seen vehicles like this before, but not so many together. Each was made of highly polished wood, carved and painted with intricate designs, and in the center of each door was a square design indicating which House the carriage belonged to—the House incal. She recognized the incals for Paren, Arran, Dillan and Saril, some of the most influential Houses in Imardin.

The sons and daughters of those Houses were going to be her classmates.

At that thought her stomach felt as if it were turning inside out. What would they think of her, the first Kyralian from outside the great Houses to join their ranks for centuries? At the worst they would agree with Fergun, the magician who had tried to prevent her joining the Guild last year. He believed that only the offspring of the Houses should be allowed to learn magic. By imprisoning her friend, Cery, he had blackmailed Sonea into cooperating with his schemes. And those schemes would have proven to the Guild that Kyralians of the lower classes were lacking in morals and not to be trusted with magic.

But Fergun’s crime had been discovered, and he had been sent away to a distant fort. It did not seem to Sonea like a particularly severe punishment for threatening to kill her friend, and she could not help wondering if it would deter others from doing something similar.

She hoped that some of the novices would be like Rothen, who didn’t care that she had once lived and worked in the slums. Some of the other races that attended the Guild might be more accepting of a girl from the lower classes, too. The Vindo were a friendly people; she had met several in the slums who had traveled to Imardin to work in vineyards and orchards. The Lan, she had been told, did not have lower and higher classes. They lived in tribes and ranked men and women through trials of bravery, cunning and wisdom—though where that would place her in their society she couldn’t guess.

Looking up at Rothen, she thought of all he had done for her and felt a pang of affection and gratitude. Once she would have been horrified to find herself so dependent on, of all people, a magician. She had hated the Guild once, and first used her powers unintentionally when throwing a stone at a magician in anger. Then, as they searched for her, she had been so sure they meant to kill her she had dared to seek the Thieves’ help, and they always extracted a high price for such favors.

As her powers grew uncontrollable, the magicians convinced the Thieves to hand her over into their care. Rothen had been her captor and teacher. He had proven to her that magicians—well, most of them—were not the cruel, selfish monsters that the slum dwellers believed them to be.

Two guards stood at either side of the open University doors. Their presence was a formality observed only when important visitors were expected at the Guild. They bowed stiffly as Rothen led Sonea into the Entrance Hall.

Though she had seen it a few times before, the hall still amazed her. A thousand impossibly thin filaments of a glass-like substance sprouted from the floor, supporting stairs that spiraled gracefully up to the higher levels. Delicate threads of white marble wove between rails and stairs like branches of a climbing vine. They looked too fine to hold the weight of a man—and probably would be if they were not strengthened by magic.

Continuing past the stairs, they entered a short corridor. Beyond this was the rough gray of the Guildhall, an ancient building protected and enclosed by an enormous room known as the Great Hall. Several people were standing outside the Guildhall doors, and Sonea felt her mouth go dry at the sight of them. Men and women turned to see who was approaching and their eyes brightened with interest as they saw Rothen. The magicians among them nodded politely. The others bowed.

As he stepped into the Great Hall, Rothen led Sonea to one side of the small crowd. Sonea noted that, despite the summer warmth, all but the magicians were dressed in layers of opulent clothing. The women were draped in elaborate gowns; the men wore longcoats, the sleeves decorated with incal. Looking closer, she caught her breath. Every seam was sewn with tiny glints of red, green and blue stones. Huge gems were set into the buttons of the longcoats. Chains of precious metals looped around necks and wrists, and jewels sparkled on gloved hands.

Looking at one man’s longcoat, she considered how easy it would be for a professional thief to divest him of his buttons. There were small hinged blades available in the slums for that task. All it took was an “accidental” collision, an apology, and a hasty retreat. The man probably wouldn’t realize he’d been robbed until he got home. And that woman’s bracelet…

Sonea shook her head.
How am I going to make friends with these people if all I can think of is how easy it would be to rob them?
Yet she could not help smiling. She had been as skilled at picking pockets and locks as any of her childhood friends—except maybe Cery—and though her aunt Jonna had eventually persuaded Sonea that thieving was wrong, Sonea had not forgotten the tricks of the trade.

Gathering her courage, she looked at the younger strangers and saw several faces quickly turn away. Amused, she wondered what they had been expecting to see. A simpering beggar girl? A workwoman bent and coarsened from labor? A painted whore?

Since none of them would meet her gaze, she was able to examine them freely. Only two of the families had the typical Kyralian black hair and pale skin. One of the mothers was dressed in green Healer’s robes. The other held the hand of a thin girl who was gazing dreamily up at the glittering glass ceiling of the hall.

Three other families stood together, their short stature and reddish hair typical of the Elyne race. They talked quietly among themselves, and occasionally a laugh echoed in the hall.

A pair of dark-skinned Lonmar waited in silence. Heavy gold talismans of the Mahga religion hung over the father’s purple Alchemist robes, and both father and son had shaved off their hair. A second pair of Lonmar stood on the far side of the waiting families. The son’s skin was a paler brown, hinting at a mother of different race. The father, too, wore robes, but his were the red of a Warrior and he wore no jewelry or talismans.

Hovering near the corridor was a family of Vindo. Though the father was richly dressed, the furtive glances he directed at the others hinted that he felt uncomfortable in their company. Their son was a stocky youth whose brown skin had a sickly yellow cast to it.

As the boy’s mother rested a hand on his shoulder, Sonea thought of her aunt Jonna and uncle Ranel and felt a familiar disappointment. Though they were her only family, having raised her after her mother died and her father left, they had been too intimidated by the Guild to visit her there. When she had asked them to come to the Acceptance Ceremony they had declined, saying that they would not leave their newborn son in another’s care, and that it would not be proper to bring a crying baby to such an important ceremony.

Footsteps echoed in the corridor and Sonea turned to watch another grandly dressed trio of Kyralians join the visitors. The boy sent a haughty look around the circle of people. As his eyes swept around the room they fell upon Rothen, then slid to Sonea.

He looked directly into Sonea’s eyes and a friendly smile curled the edges of his mouth. Surprised, she began to smile in reply, but as she did his expression slowly twisted into a sneer.

Sonea could only stare back at him in dismay. The boy turned away dismissively, but not so quickly that she didn’t catch a smile of smug satisfaction. Sonea narrowed her eyes and watched as he turned his attention to the other entrants.