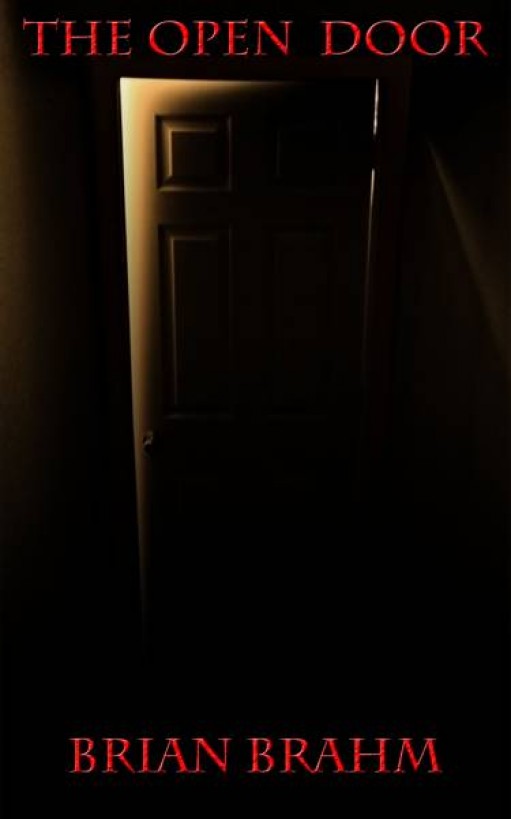 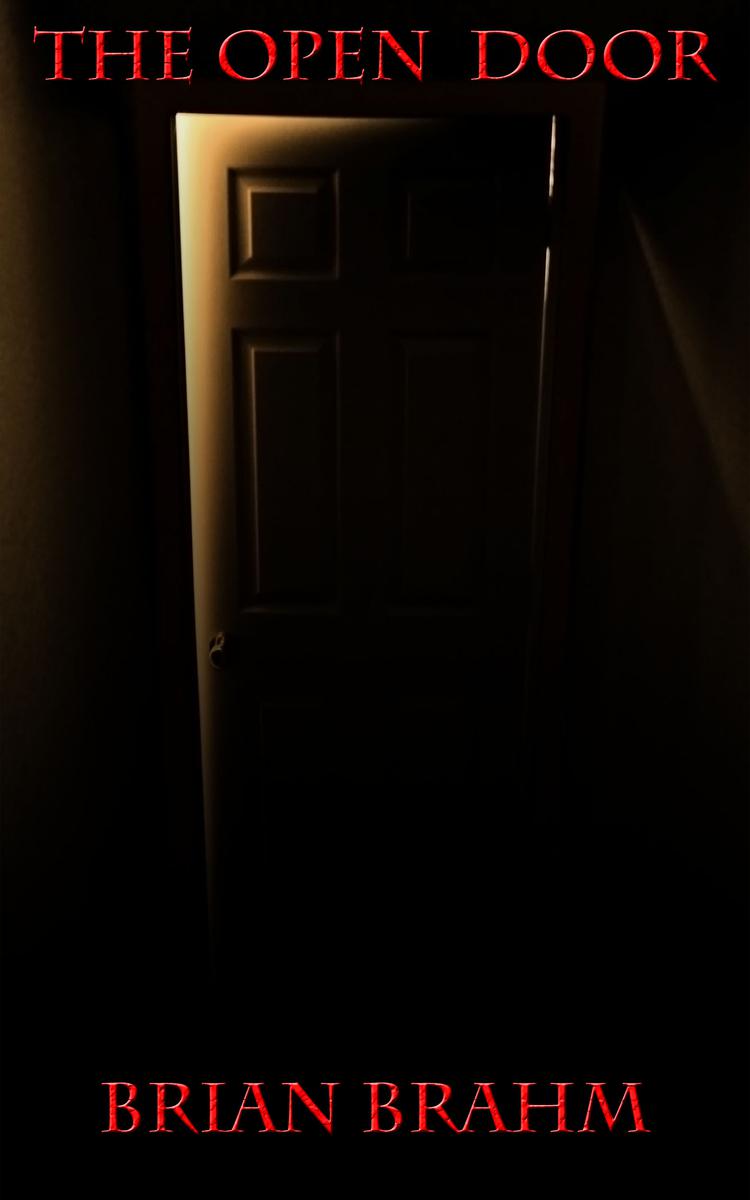 The Open Door
is a work of fiction.
Names, characters, places, and incidents are the products of the
author’s imagination or are used fictitiously. Any resemblance to
actual events, locales, or persons, living or dead, is entirely
coincidental.

All rights reserved. This book may not be
reproduced in any form, in whole or in part, without written
permission from the author.

In life, there are people who are content to
accept things as they are, never venturing outside that which they
know and find comfort in. There are others whose minds are
infinitely more open.  These are people who see things a
different way and often times are able to think of more
options—more solutions to the nagging problems life can offer.

Sometimes having an open mind has its
downfalls.  An open mind is not unlike an open door; it can
let in a draft, insect, spider, rodent, and sometimes far worse.
The more open the door, the more room for larger, creepier
things.

Most people close the door early on, either
inadvertently or intentionally.  These people rarely find
themselves face to face with anything more troubling than a
skeleton in the closet.

For people who leave their door open entering
adulthood and beyond, enough time is allotted for something far
more heinous to find its way into their lives.

Scott Abrahamson is the latter—his door had
been left wide open his whole life—leaving him with an
extraordinary dilemma. It is his story that I am here to tell. For
you to know and understand his life’s path, it’s of the utmost
importance that his life experiences be shared in full
chronological order. After that be told, his story will begin, and
knowing the history of Scott Abrahamson will allow for you, the
reader, to better understand the depth of his life altering
revelation.

September 20, 1983: It all started in a large
gothic cathedral, constructed of charcoal-grey stone. It sat at the
end of Shallow Hill Road, atop a wooded hill. A true work of
architectural art, it was ornate and ponderous with statues of
angels standing guard on every corner, and the highest tower
supported a massive cross—proudly displayed in the center of the
cold stone structure. Large, intimidating wooden doors, with
detailed carvings of tangled vine, welcomed all who passed.
Majestic and meticulously maintained, the dark richly colored
entrance was grandiose.

Visitors from all over were always in awe of
the early 1800’s cathedral.

Age thirteen and not yet baptized, Scott
Abrahamson still attended mass each Sunday with his Dad, Frank.

His Dad had attended high school with the
head priest, Father Cunningham—the same priest who was once a
teenager, constantly scorned by Catholic school nuns.

Each Sunday they discussed enrolling Scott in
the next bible study class, a requirement for baptism, but for some
reason he never attended.

His Dad’s old high school buddy, the priest,
was a good man, so there was no logical explanation as to why Scott
never followed through with the required class—preoccupied with
being a teen—most likely.

Tall and hunched over, an elderly gentleman
with untamed pure white hair, and a permanent scowl fixed upon his
face, sat to the rear and in the center of the stage with his back
to the audience as he played the massive pipe
organ—passionately.

His head often dropped down below his crowded
shoulders, springing up like a
Jack in the Box
each time he
struck a dramatic chord. Hair flailed, pulsating veins popped out
of his skull—as if keeping time like a flesh-covered metronome.

Mr. Vanderbrook was the highlight of the
service for many who attended. For twenty years he opened and
closed the sermon each and every Sunday; he had become a permanent
fixture of the great hall.

Bach in D-minor echoed throughout the thick
stonewalls to begin the 11-O’clock mass.

Mr. Vanderbrook’s cold boney fingers lifted
from the keys of the colossal organ, the last note reverberated for
several seconds before slowly vanishing into the cobblestone
floors.

Each time someone from the audience coughed
or adjusted themselves in the old wooden benches, the noise creaked
throughout the massive structure. The Father’s voice did the same
as he read through Scripture.

Looking around the interior of the place—as
Scott did every Sunday—he studied the ornate stained-glass windows,
ceiling carvings, statues, and the hundreds in attendance.

There was always a lot to take in, and as he
panned around the magnificent walls, he noticed a man standing at
the main entrance.

The entrance doors were open, the sun was at
his back, and he was wearing a top hat and long dark coat, making
it impossible for Scott to identify the shadowy figure.

His hands were knitted behind his back; his
head tilted slightly forward, the brim of his hat lay over his
shaded eyes, exposing only his pointy nose and chin.

Sitting towards the back and near the isle,
Scott discretely watched the man—trying to catch a glimpse of his
eyes, but the stranger never moved from his concealed posture.

Tall and lanky, but not weak, he stood strong
and seemed to be sure of himself.

The man faced Father Cunningham while he gave
the sermon, but with his eyes hidden, he could have been looking
anywhere in the room.

Scott took another look around. He was the
only person in the entire church that held more of an interest in
the ominous stranger than the priest—everyone else faced forward,
quietly listening.

Scott’s Dad, who was sitting to his left,
also ignored the presence of the man who chose to stand in the
entrance rather than find a seat.

Looking back at the statuesque figure, he
remained fixed, like a new addition to the Godly fortress had been
erected, or in this case, resurrected, as if from the dead.

Father Cunningham began reading the part
where Eve, in a moment of weakness, listened to the evil serpent,
and ate from the forbidden tree.

Looking back at the statue of a man, Scott
noticed something was different; something had changed. The right
corner of his mouth was raised, crinkling his paper-thin,
transparent skin. Grinning like a mischievous child preparing to do
wrong—to do evil.

Scott looked around, unable to find anything
humorous or that would entice a smile.

Again he gazed back at the entrance. This
time the ominous figure looked in his direction, still grinning,
eyes still blackened under the brim of the dusky hat.

Startled, Scott faced forward and watched
Father Cunningham. Curiosity quickly got to him, so he slowly
turned to see if he was still being watched. The man was gone.

Father Cunningham continued reading, his
voice began to sound horse, and he started to cough. Taking a sip
of water, the humble looking priest was able to read clearly again.
After only making it through another two verses, the Father again
began coughing, only this time it was uncontrollable.

Father Cunningham excused himself and hurried
behind stage where he could attempt to gain composure.

Mr. Vanderbrook walked back on the platform,
sat at the organ, and began playing another haunting piece of music
to entertain the crowd until Father Cunningham was able to
return.

The eerie song Mr. Vanderbrook chose to play
was not one familiar to the weekly attendees, but he seemed to know
it well, and played it with more intensity than what they were used
to seeing. The music began to ascend; the organ seemed to rise in
volume as Mr. Vanderbrook became increasingly violent, pounding on
the black and white keys as if he wanted to show the audience he
possessed the strength to crack the ivory bars.

At what seemed to be the finale of his piece,
Mr. Vanderbrook struck chords with both hands, allowing the tangled
notes to reach almost painful levels. He thrust his head back, and
glared at the cathedral ceiling while tears glided over his pale
weathered skin.

Two alter-boys approached and attempted to
comfort the organist, as he crumpled to his knees—an emotional
wreck. “Back off!” Mr. Vanderbrook screamed in a voice not fitting
of his frail appearance.

The alter-boys ran to the back where Father
Cunningham still rested. Although he appeared exhausted, and his
voice horse . . . Father Cunningham appeared to be fine.

Many people began to file out of the church’s
exit. Some too uncomfortable to stick around and see what might
happen next, and some confused by the spectacle.

Scott and his Dad finally made their way out
the towering sanctuary doors; doors that seemed more unpleasant
than before, as if they were meant to conceal something inside that
the world would do better without.

The day was sunny and unseasonably warm.
Vehicles crowded at the exit, and one by one started down the hill.
Scott stood by his Dad’s vehicle waiting for the herd to thin
before attempting to leave.

Looking back at the open entrance doors one
last time, something troubling caught Scott’s eye: on stage inside
the cathedral, the tall thin man stood facing him. Still wearing
his top hat, and with a sinister serpent-like grin about his
face.

A gust of wind blasted by, and the two
cathedral doors slammed shut simultaneously, concealing the ominous
figure inside.

A once beautiful place of worship now carried
the look and feel of an ancient tomb.

October 13, 1984: A little over a year later,
Scott experienced something even more chilling than what took place
in the old cathedral—where he had not returned since.

It was on a cold and breezy night in mid
October, the snow had yet to fall, but the bitter temperatures were
telling of a storm on the horizon.

Scott lay in bed with his back pressed
against the chilled wooden headboard, and the covers pulled just to
his waist, leaving his arms and hands free to hold the book he had
selected.

The twin bed was sufficient for a normal
fourteen year old, but being tall for his age, the bed appeared to
be closer to a single beneath his tall lanky frame.

Scott’s bed was centered in the room with its
headboard pressed against a wall, leaving just enough room to
maneuver between the bed and the wall to his left so he could
adjust the window. To his right was the bedroom door, which was
always closed. Straight ahead on the opposite side of the tiny room
was another window. Outside of that window was an old crooked tree,
stripped of its leaves, and constantly tapping Scott’s window on
nights such as tonight when the wind whirled and howled.

The sound of the wind rattling the two
bedroom windows, tree branches gently tapping, accompanied by the
dry brittle leaves clattering on the ground, were a haunting
symphony that often lulled Scott to sleep these winter months. But
for some reason, the sounds of nature left him restless and uneasy
this night.

My Best Man by Andy Schell
Homeland by R. A. Salvatore
Good Bait by John Harvey
to the Far Blue Mountains (1976) by L'amour, Louis - Sackett's 02
The Human Division #12: The Gentle Art of Cracking Heads by John Scalzi
Band of Gold by Deborah Challinor
Starla (The Ladies of Karnage Novella Series) by Culbreth, Jennifer
The War of the Dragon Lady by John Wilcox
The Shadow Patrol by Alex Berenson
La invención de Morel by Adolfo Bioy Casares