Read The Other Countess Online 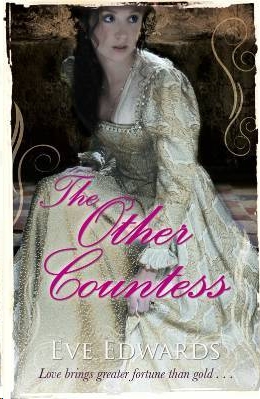 EVE EDWARDS has a doctorate from Oxford University and thinks researching is a large part of the fun in writing historical fiction. She has visited Tudor houses, attended jousts and eaten Elizabethan banquets to get the sights, sounds and tastes right for this book. And, yes, she can testify that it is possible to eat neatly Tudor-style without a fork. She lives in Oxford and is married with three children.

With thanks for all those evenings at the Phoenix

The first time Ellie met William Lacey, she thought him terrifying. Like a golden-haired angel fallen among mortals, the newly created earl blazed with impatience as he stood beside his widowed mother in the hall of his dilapidated manor house. At fourteen, he was one of the youngest and most important nobles in England and clearly did not feel he should have to listen to Ellie’s alchemist father as he offered his condolences for their recent loss. Ellie knew then that the earl hated Sir Arthur Hutton and all those associated with him – which unfortunately included her.

The earl may have held his temper had her father restricted himself to sympathy; but to Ellie’s dismay, Sir Arthur would go on to be obvious about his wish for continued patronage from the family. Ellie felt her horror rising; it was like watching helplessly as someone stepped off a cliff. She wished her dear, unworldly father would just be quiet. Anyone could tell he was merely sewing his own shroud with each word he tugged from his vast store of knowledge.

The new Earl of Dorset tapped his foot; his fingers curled in fists on his hips and two lines formed above his nose as his brow furrowed. If he’d had wings they would’ve been beating
with fury, like the tapestry in the church showing the Archangel Michael on the Day of Judgement. Though only two years older than her, to Ellie’s eyes, the earl had all the glowering authority of his position – an adult newly chipped from the block with none of his corners yet smoothed.

‘… and as you know, my lord, we alchemists believe we are not far from finding the secret of transforming common lead into gold.’ Sir Arthur sketched a vague shape in the air, his sleeve falling back to reveal his fingers and forearm scarred by his labours over the crucible. ‘With only a few more years of study, I am convinced we can unlock nature’s secrets. Your honoured father understood this – and dedicated himself to the pursuit. He –’

The earl held up his hand, blocking Sir Arthur’s plea mid flow. The alchemist blinked at him in surprise like an owl woken prematurely from sleep. Ellie slid further behind her father’s long black robes, fearing the earl was about to launch a thunderbolt – or run them out of the county at the very least.

‘I understand, sir,’ said the earl crisply, ‘that my
honoured
father held open house for men of your profession.’

Arthur gave a fond smile. ‘Indeed, he was most generous –’

‘So generous that he spent the entire family fortune in this fruitless pursuit!’ The earl spat the words as he would an insult. ‘If you alchemists are so close to turning base metal into gold, where is mine, pray? What have you leeches done with the gold earned from my fields and by my people?’

Anger flashed through Ellie at the earl’s accusation. Her father was no leech! He sincerely believed in his search for gold; he spent little on himself, but dedicated everything he
had, all that was given him, to what he saw as a higher cause. And he would do it too – he’d promised her. All he needed were people who would have faith in him. She ground the toe of her shabby boot into the stone floor, afraid that her feelings would get the better of her and she would blurt out a defence of her father, making things worse.

‘The Lacey family has no more money to throw away.’ The earl signalled a servant out of the shadows, the intent to eject them clear. ‘You may spread the word among your fellow
scholars
that there will no longer be any welcome for alchemists at Lacey Hall – unless they wish the welcome of being chased off by my hounds.’

‘Will, please.’ The widowed countess placed her hand on her son’s forearm. He was trembling with rage, fists clenching and unclenching at his side in a silent struggle to keep a hold of his temper. ‘Sir Arthur has his daughter with him,’ the countess said in a gentling tone.

The young earl took a deep breath, mastering himself. He forced a smile. ‘Apologies, madam,’ he said to his mother. ‘I did not mean that I would take such steps against the man, unless he was foolish enough to return.’ His gaze sought out Ellie, finding her in her father’s shadow, a small girl of some twelve years with a mass of long black wavy hair escaping from her coif. Ellie knew she looked a disgrace to her rank; her father didn’t consider such things as dress important and it was long since she’d had so much as a new ribbon.

‘Mistress Hutton need have no fear; my anger is not directed at her.’ The earl touched his mother’s hand lightly, reassuring her that he was not going to let his formidable temper loose.

‘Then perhaps we could offer Sir Arthur and his daughter some food from our kitchen, before Turville,’ the countess nodded to the servant, ‘sees them on their way?’

‘Yes, that would be best. I’m sorry, Mother, I must get some air. The stench of alchemy makes me sick. Good day to you.’ William Lacey flicked a gesture towards the waiting Turville, passing over the problem of the visitors to him, then strode out, whistling sharply to his dogs. The pack clattered out of a doorway behind Ellie, brushing her skirts in a mass of white and tan and wagging tails. She clutched at her father’s arm, fearful that the earl would not keep his word, but the hounds passed her without a second glance.

When she looked round, the countess had retired, leaving only Turville, a brawny man with sparse ginger hair and a choleric complexion, glaring at them.

‘Out!’ he said, jerking his thumb to the door.

‘But –’ spluttered Sir Arthur, not quite comprehending that his hope of employment had been dashed.

‘I’m not as soft-hearted as them.’ Turville indicated the portraits of the family lining the walls. ‘You false-mongers have a lot to answer for. There’ll be no food from me. Get your worthless hide off Lacey land. And take your little beggar’s brat with you.’

The insult to his daughter did penetrate Arthur’s confusion. ‘Enough, you, you varlet! You must not speak of her in that fashion. She is a countess, the Lady Eleanor Rodriguez of San Jaime …’

Turville snorted. ‘And I’m the King of Spain. Be gone or I’ll kick your backsides from here to Cadiz.’

Arthur seemed inclined to stay to defend her honour. Thanks to her deceased mother, a younger daughter of a minor Spanish noble, it was true that Ellie was in possession of a mouthful of titles, but none of them meant anything when you stood in a patched gown in an English earl’s hall. Her father, who had once been a diplomat of wealth and respect in Madrid, had come home to descend into poverty, blind to all else but his quest for the elusive gold. Responsibility for all practical matters weighed heavily upon Ellie’s slight shoulders, and they still had to find food and lodging for the night.

‘Please,’ she begged her father, tugging at his sleeve. ‘
Por favor, mi padre
.’

Arthur finally noticed the desperation in her voice and absent-mindedly ruffled her hair.

‘We don’t need these people’s charity, do we, Ellie?’ he said tenderly, slinging his pack over his shoulder. ‘The road to knowledge is full of briars and thorns to prick us on to greater efforts.’

Or to make us hurt and bleed
, thought Ellie glumly, picking up her own bundle.

‘I do not bid you “farewell”,’ Sir Arthur said gravely to Turville. ‘You do not warrant such a courtesy.’ With a fine sweep of his cloak, he marched out of the open door like a king leaving his court.

Ellie took a final glance around the once-elegant hall, regretting that there would be no roof over their heads that night, not even a leaky one like this. She doubted she’d ever be back.

‘Get thee gone, little Spaniard,’ jeered Turville, watching her suspiciously. ‘Or I will set the dogs on you.’

Ellie tossed her head, pride not letting her show fear. ‘
Malvado!
Your master said you wouldn’t – and besides, sir, he took the hounds with him.’ She was tempted to stick out her tongue.

‘Not my Bart, he didn’t.’ Turville clicked his fingers and an Irish wolfhound rose wraithlike out of the shadows by the empty fireplace. Almost as tall as Ellie, it turned its grey whiskered snout to her and a spool of saliva unwound to the floor. The servant watched with satisfaction as the girl turned pale. ‘And the master isn’t here to see what I do.’

‘There’s no money left,’ the countess announced, leafing hopelessly through the family accounts. ‘The harvest returns were not good this year, so we have already run through our reserves.’

Will stared out of the window, the tiny panes of glass distorting the forked trees. The snow lay thick on the ground. Deer wandered in the park, undisturbed today by any hunt. His quarry for the foreseeable future had to be coin, not meat.

‘What are we to do, Mother? Do we have to bring James and Tobias home?’

The countess rubbed the bridge of her nose, a headache gathering. Sharing a tutor at another noble family’s house, the fees for her youngest son’s schooling were due and James was sending in hefty bills from Cambridge.

‘And there’s Sarah’s future to consider too.’ Will scratched at the frost on a pane with a fingernail, writing his initials. ‘Thank God, Catherine’s well married, but I still owe Huntsford part of the dowry. He said he’d give us time to pay, but it is a stain on our family if I cannot come up with the rest. He’s a good friend – and to be frank, it’s embarrassing.’