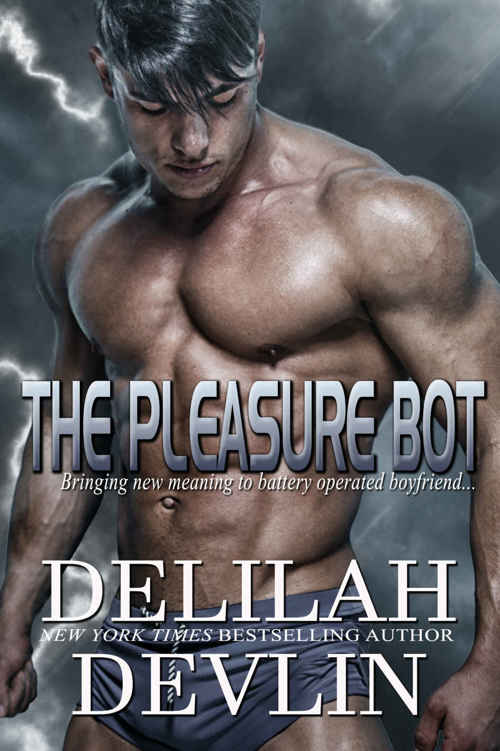 In the Planet Desire universe

Priscilla Potter rents the latest sex toy, a better-than-lifelike pleasure robot, for a little weekend R&R. However, her fantasy companion isn’t quite what she expected. He’s unshaven, uncouth, and doesn’t seem to understand she’s in charge of her own pleasure. But she soon decides the on-line shop got the order just right. As the weekend draws to a close, she has to find a way to keep her robot past its return date.

Bootlegging “entrepreneur” Declan O’Hanlon needs a place to lay low until he can figure out how to liberate his crew and ship from Customs impound. The “uninhabited” house he picks for his hideout actually belongs to a sex kitten who mistakes him for her latest toy. Intrigued by the idea of being a woman’s fantasy come true, Declan does what any red-blooded man would do—he pretends to be her acquisition. But he doesn’t count on Priss being quite so irresistible. As the time depart nears he wonders how he can ever leave her behind.

Check out the other books in the
Planet Desire
series:

Other Books by Delilah Devlin

T
he worn, the
leather saddle creaked and groaned as Priscilla Potter rode, her gaze on the open prairie before her.

“Faster, baby, faster!” the low male voice rumbled in her ear. She smiled at the warm gust of air tickling her neck.

The newly broken stallion leapt across a narrow ravine, barely more than a jagged crack in the sun-scorched earth, and again, her bare bottom slammed against the hard leather, pushing the cock deeper inside her pussy as the seat rocked forward and back to the motion of the galloping horse. “Yes! Yes!” She was nearing her climax, her liquid arousal lubricating the pulsating rod stretching her vaginal walls.

“That’s it, baby, you’re almost there,” he murmured. “Ride this little doggie into the dirt.”

The saddle jounced roughly, almost unseating her. She reached for the saddle horn and held on tight. “Like it rough, do you, Jake?” she asked, delighted with the change in program.

“Come for me, baby,” he whispered. “Almost—,” the seat groaned again, and the cock broke free from the saddle, “—theeerre-uunnnh…” The riding apparatus shuddered to a halt.

“I thought this thing had a ten-thousand-hour warranty,” Priscilla grumbled, her pussy still humming. She stomped to the living room and flopped down on the sofa. “I can’t believe it! Work’s been hell this week. All I wanted was a little stress relief, and the damn saddle breaks. I was
right there
.”

“Boss, do you think this might be a sign?” Agnes’s wry voice rang from the speakers in the ceiling. “Your life is all about work. What are you trying to prove, anyway? Your parents aren’t around to see what you’ve accomplished.”

“I’m not trying to prove anything. Besides, they have more important things to do—like saving planets from wars or negotiating trade agreements.” Priscilla hated the sour note in her voice. She was very proud of their work on behalf of the Dominion. She’d long since stopped feeling like she’d let them down when she’d flunked Galactic Political Science at the university. Really.

“Maybe you need the real thing.”

“You mean a man?” Priscilla snorted. “Why would I want that? Men are messy and demanding. They burp and scratch, and the last one wanted to move in without a pre-cohabitational agreement.” Priscilla sank deeper into the fabric of her plush, upholstered sofa and slid her fingers between her labia, working her flesh to maintain her arousal. “I’ll pass. I don’t have time to romance another lover. Besides, my debit account couldn’t handle another messy break-up.”

“Why don’t you let me plan a little vacation for us? Have you ever considered that your choices are rather limited here? I mean, we are talking Texas. Land of the Technogeek. Hardly the place to find a real man.”

The throbbing in her pussy waned. Priscilla almost cried with frustration and removed her fingers from between her legs. “Agnes, you are personality-programmed for me, aren’t you? Or did they switch you in the incubator?”

“I’m
exactly
what you need. The latest in cellular technology. And I’m telling you I’ve run your profile—you aren’t going to find Mr. Right here in South Texas.”

“See? This is a pointless discussion. Mr. Right doesn’t exist. So why don’t you be a good personal assistant and bring up the
Playthings for Playmates
catalog? I need to order a replacement—and this time, no cowboy theme. I’m tired of the smell of horse and leather. And I want a playmate who does what I tell it to do. The cowboy app thought it was in charge.” If Jake hadn’t been so bent on showing her the sunset, she might have gotten her orgasm before the apparatus broke.

“And what do you think will satisfy you, Miss Priss? You have a whole closet full of toys.”

“Don’t get sassy with me, or I’ll pull your power grid.”

Agnes chortled. “You wouldn’t last an hour before you’d boot me back up.”

“Maybe I’d just hit reformat and wipe your hard drive clean,” Priscilla grumbled. “If I started from scratch, I might actually get an assistant who does what I tell her.”

“Girlfriend, you’d be comatose. No man to drive you crazy
and
no Agnes to snarl at.”

“Yes, ma’am!” Agnes saluted with a click of her simulated heels and dropped the bioluminescent screen from the ceiling, nearly smacking Priscilla in the head. Agnes adjusted it to the correct height, tilting the screen with a snap to the proper angle. “I’ve already earmarked the pages you’ll want to check out.”

Priscilla glared at the clerk, reminding herself he was only virtual—therefore getting angry with him didn’t serve a real purpose.

“So glad to see you again,” the clerk continued, tucking a lock of platinum hair behind his ears. He leaned forward, his handsome face filling the screen, his bluer-than-true-blue eyes glittering with sly amusement. “What can I help you with today, love?”

Nothing worse than a smug salesman, Priscilla thought, unless it was a smug, computer-simulated salesman.

“Are you looking for a replacement for the Texas Tornado so soon? With your frequent riders’ membership, we can offer you a deal on an upgraded model.”

Priscilla narrowed her eyes. “Tonio, about that saddle. The damn thing broke. Wasn’t it under warranty?”

“You surpassed the 10,000 hours three months ago, sweetie.” Tonio winked. “Of course, we can refurbish that model, but I think you’ll want to check out our newest innovations first. In fact, Agnes just sent me an updated profile.” He looked to his right. “Nice font choice, dear.” Turning back to Priscilla, he said, “She’s fast! And so
verrry
good. You’re lucky to have her.”

Priscilla rolled her eyes. “Did she put you up to that? Threatening to pull her grid must have really made her nervous.”

“She’s just grumpy, Toni-baby,” Agnes said. “Did she mention
she
broke the saddle?”

“Ah!” With a superior smile pasted on his lips, he raised both eyebrows. “So Miss Priss, how about you just lie there, and I’ll give you the tour. Mmm-mm. Love the pout of those nipples, by the way.”

Priscilla sighed and cupped a breast. The tip tingled with the contact. The app knew just what to say tweak her arousal. Hell, Tonio knew what she needed, so why didn’t she? “I’m telling you now—I expect to be wowed,” she said, expecting disappointment. How could one package fulfillment? Or love?

Tonio led the way down a long, white corridor backlit with rosy light fixtures. He paused and waved his hand over a purple button labeled “
MOD
”. A long rack of toys shimmered into view along the wall. He selected one and fondled the large lavender-hued vaginal applicator. “Of course, we have the latest in Manually-Operated Dildos—quiet, self-lubricating—”

“She has dozens, in every width, length and texture,” Agnes interrupted.

“She’s not interested in a rental, Tonio,” Agnes replied before Priscilla could open her mouth.

“Yoo-hoo!” Priscilla said, waving at the screen. “What about what
I
want? Why don’t you ask
me
?”

“She doesn’t have time to return anything to the store,” Agnes said, without acknowledging her boss’s interruption.

Priscilla sighed in frustration, but she had to admit Tonio’s long windup of a sales pitch had caught her interest. “All right, show it to me.”

Tonio finally looked straight at her. “I can’t,” he replied, with another smug look.

Priscilla was sure her teeth would be ground to nubs by the end of the conversation.

He patted his long, blond hair while his gaze never left hers. “You see, each model’s form is regenerated—according to the needs of the individual client.”

“Is this a toy we’re talking about?”

Priscilla groaned. “I don’t want a doll to hump. I need action—”

“I have MODs that come and go limp.” She waved her hand. “I know, I know. They’re what every woman wants.”

“But do they have fingers and moist tongues? Large, rock-hard cocks and flexible, suctioning mouths?” He stepped closer so that his face filled the screen. “And do they have artificial intelligence that allows them to learn your desires and act independently upon them? Hmmm?”

“No-ooo.” Priscilla leaned forward and wished she could control the flush of heat that betrayed her interest. “Your robot does all that?”

“Why can’t I see a sample of the product? Don’t you have a mock-up?”

Tonio lifted an eyebrow. “Tell me, love, you’re a marketer by trade. If I showed you a product not intended for your consumption, wouldn’t you still have an expectation about its appearance or performance?” At Priscilla’s frown he added, “We prefer to surprise our customers. We’ll map your preferences, gleaned from the thorough profile Agnes has provided us, to build you the perfect sexual partner.”