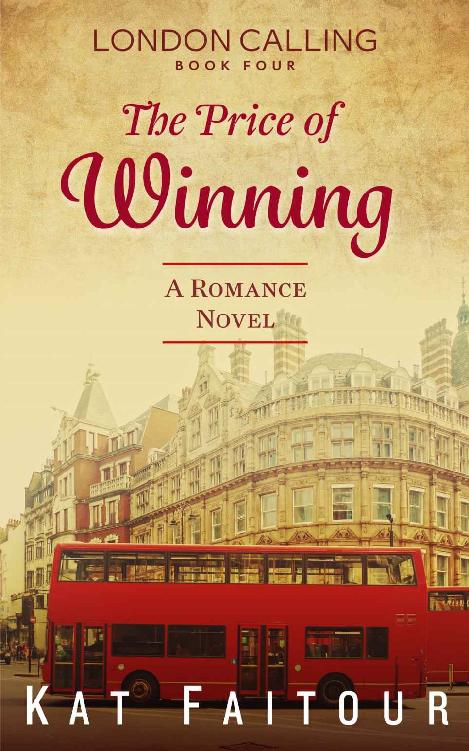 A Note from Kat

A
LSO
BY
K
AT
F
AITOUR

A Matter of Trust, London Calling Book One

All rights reserved. This book or any portion thereof may not be reproduced or used in any manner whatsoever without the express written permission of the author except for the use of brief quotations in a book review.

This is a work of fiction. Names, characters, businesses, places, events, and incidents are either the products of the author’s imagination or used in a fictitious manner. Any resemblance to actual persons, living or dead, or actual events is purely coincidental.

Make sure you don’t miss new releases and free books by joining my readers’ group! Sign up at
http://www.katfaitour.com
and join the fun.

My brother, teacher, and dragon slayer. You’ll always be my first hero.

Tamara Lush — friend, critique partner, and fellow author. I’m so grateful to be taking this journey right alongside you.

It was easy in Chicago since the weather dictated some kind of outerwear to combat snow in winter, rain in fall, or wind in summer. Today, she sported a light jacket and ball cap in case the looming clouds overhead decided to burst forth in a spring shower. As she jogged down the street, she dodged pedestrian commuters and panhandlers, silently soaking up the city’s humanity without ever having to engage with it.

She preferred things this way.

Madeleine lived life on her own terms. Dominic Martin had provided her the means of working from her luxurious penthouse apartment, a gift from him over six months ago when he raised stakes and moved to London. They’d had a few bumps in their road, but ultimately she knew herself to be a valued and important asset to his business. And as his virtual assistant, she could maintain the life she wanted while preserving her privacy.

She was practically invisible.

Veering from the sidewalk that hugged Lake Michigan, she turned onto Chicago Avenue to return home. With a brief pang she passed Lake Shore Park, which housed various tennis courts and a state-of-the-art gym that employed some of the best dance instructors in the city. She missed ballet. During her youth, it had taught her the discipline and structure necessary to avoid the pitfalls of child stardom. When she transitioned to adulthood and subsequently to modeling, it gave her peace and an escape from the madness of public life.

Not to mention, she had excellent posture.

She shrugged, accepting that change was inevitable, and it was best to be flexible and adaptable. She’d installed a barre in one of the spare rooms of the penthouse. Because she had more room than any one person could need, she’d chosen the largest of the three bedrooms and lined three of the walls with mirrors. The remaining wall consisted solely of floor-to-ceiling windows, so when the sun did shine in Chicago, it bathed the wooden floors in golden morning light. A premier ballerina met with Madeleine three mornings per week to work through an hour of grueling exercises, strengthening and toning her muscles into lean firmness.

Blessed with an energetic metabolism, Madeleine was naturally slim. But working from home limited her activity, so she made certain to exercise and jog on a daily basis. Few people knew she left her home at all, since she did so with paranoid stealth. Even the doorman carefully questioned whether she might like to venture outside for a walk along the lake or visit one of the local restaurants when the weather was nice. Most days she simply smiled and nodded, collecting her mail while deflecting him by asking about his wife and dogs.

She didn’t answer to anyone anymore, not even her kindly building concierge. She was quite fond of him, as he carefully vetted anyone who asked for access to her. But since the debacle of Sebastian Payne’s visit, she kept more to herself, only allowing those she specifically hired—and her parents—to come upstairs.

Checking the fitness tracker strapped to her wrist, Madeleine confirmed her running pace was steady and her heart rate ideal. She was outside a neighborhood theater when she nearly stopped to check the schedule of upcoming shows. It was a favorite venue of hers for simple reasons. If they recognized her at all, they were incredibly discreet. And when a play appealed, she attended and enjoyed it with full anonymity in the darkness.

She paused, jogging in place for three steps, as a low rumble of thunder rolled overhead. Looking up, she saw the sky was still pale gray while the darker clouds were piling up over the lake. It was enough, though, to remind her that shows and times were easily checked online in the comfort of her home. Her gait barely hitched as she continued her run, picking up her pace to make up for the seconds lost.

Routine and structure were important to Madeleine. While acting and modeling, she’d had precious little control over her own time. Now, she relished her ability to dictate how her days would be conducted. Breakfast by eight, lunch at one, and dinner at six. She started work early to catch up with Dominic, knowing his day was already six hours ahead. They scheduled calls before breakfast and after lunch. If matters were urgent, exceptions could be made.

As she neared her building, lightning split the sky over Lake Michigan. Looking up, she knew rain was imminent and preferred not to be doused. Ducking under the awning of a neighboring bank building, she paused to consider whether she should continue her route or just head back inside. Normally, she would run another mile or so to complete a four-mile route around her home.

She glanced over and saw a man sitting on the pavement several yards away. If it started raining, he would be completely exposed. But rather than moving, he just sat there, seemingly indifferent to the weather and anything else that might be happening. Madeleine made a quick decision. She stepped closer to him, avoiding his eyes by looking up at the sky. She slipped her lightweight backpack off her shoulders, unzipped it, and removed an inexpensive, compact umbrella. She packed it with her on her runs, just in case the skies decided to unleash unexpectedly.

She held it out to him, fixing her gaze on the sidewalk rather than his face. She noticed he wasn’t panhandling or surrounded by his things. In fact, he wore a suit, which she thought was mildly unusual. “Here. Take this or you’re about to get really wet.”

He hesitated so long that she looked up into his eyes. They were dark, dark brown, briefly reminding her of Sebastian Payne. Sebastian also had brown eyes, but his were almost black, nearly matching his pupils. Sooty lashes paired with jet-black hair and olive skin made him look like some sort of devil.

Except when he smiled, as he briefly had when he arrived at her door that day. Then his face lit up from within, as if he had some delicious secret and was inviting you to share it with him.

She shook herself, pushing the umbrella farther toward the man on the sidewalk. This was no time to remember Sebastian Payne, and certainly not their last encounter. If she were lucky, she would never see him again.

“No, thank you.” The man spoke and his voice was hoarse, as if he hadn’t spoken recently.

Something about him bothered Madeleine. He seemed vulnerable. Whether it was because she used to be the type who brought home strays or because she recognized something similar in herself, she offered her hand. “Are you okay? You can come inside my building and rest in the lobby if you’d like.” She motioned toward her building next door.

“I said no.” The man’s tone was louder, almost belligerent.

Madeleine was startled into looking at him straight on again. She started to pull the umbrella back toward her when he grabbed it, tugging her closer along with it.

“I know you.” He sounded ominous. Threatening.

Madeleine’s breath hitched. She abruptly released the umbrella, sending the man sprawling backwards from his own momentum. Shrugging her pack onto her back, she hurried away, gradually speeding up until she was at a full sprint.

Nevertheless, she heard him. Behind her he yelled, “I know you! Come back!” She looked over her shoulder and was relieved to see him still sitting on the sidewalk.

No matter. She turned away, cursing herself for revealing where she lived. It was stupid and reckless—just the sort of thing she used to do before she understood the damage people could render.

As she reached her building’s entrance, the clouds broke and sent rain sheeting down. She yanked the door open and ducked inside, dripping water as she wiped her feet. The building’s concierge and doorman, Dan, hurried toward her, apologizing.

She reassured him. “It’s okay. I just stayed out a little too long.” She waved her hand toward the windows but immediately tucked it inside her pocket when she noticed she was shaking.

His eyes narrowed, clearly catching her betraying tremor. He smiled weakly, clumsily patting her on the shoulder to usher her toward the elevators. Softly, he said, “You’ve got a nice surprise waiting for you, miss. Your parents are visiting again—I’ve just seen them upstairs for you.” He paused. “I didn’t realize you’d left the building. So they’ll be waiting.”

She nodded, a jerky movement that she chalked up to her startling encounter with the man outside. She entered the elevator then turned to face Dan.

“I saw someone outside, and he recognized me. Please make sure no one gets upstairs that isn’t approved.” She punched the elevator button for her penthouse floor.

He tilted his head to the side in puzzled appraisal. “Yes, miss. Always.”

His gaze dropped to the floor then lifted. She saw his crooked smile right before the doors closed to whisk her upstairs.

When they slid open again, she saw her mom and dad waiting on a bench outside her door. Immediately, a wave of love washed away Madeleine’s tension and eased her breathing.