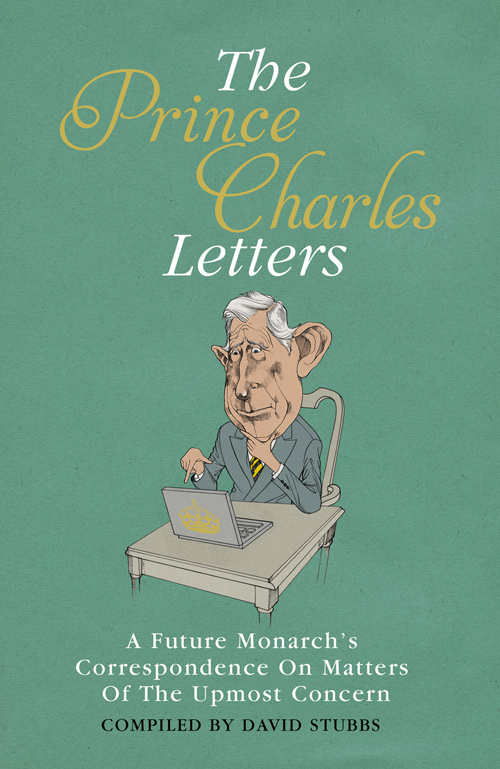 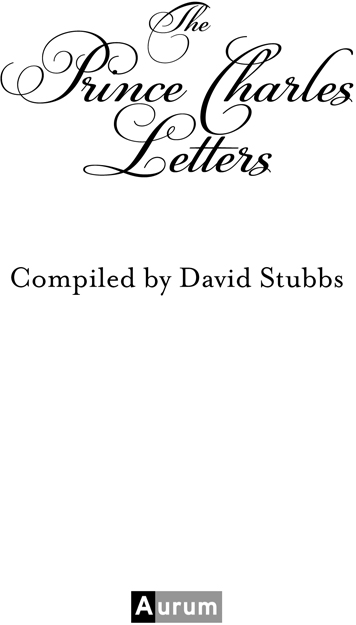 To Alisha – my little Princess

Leaders of Britain (For a Short While)

The Beat Musicians: Those Who Make Us Swivel to the Rhythm

The So-Called ‘Fourth Estate’: Broadcasters and Their Sort

Business, Technology and Other Necessary Carbuncles

Beyond the Hurly-Burly of the Industrial Era: Spirituality and the New Age

In recent months it has emerged that Prince Charles has long been in the habit of writing highly opinionated letters to various government ministries and departments. This revelation has provoked anxious debate as to whether the Prince is exceeding himself in attempting to influence policy in this way. Is he overstepping his constitutional bounds, or quite properly and democratically airing his views as Prince of the realm and concerned citizen?

Certainly, there have been calls for the letters to be made public in order that their contents can be laid open to wider scrutiny. And now, thanks to one of the most extraordinary leaks of modern times, we can see, for the first time, the full extent of the Prince’s tireless epistolary efforts.

It was approaching 5.45 in the evening, just as staff were leaving for the day, when a stooped, haggard fellow with the elegant but harassed air of a gentleman’s personal gentleman appeared, unannounced in the office doorway at Aurum’s publishing HQ. Reception hadn’t buzzed him up – it later turned out that he’d slipped in via an open window in the back alleyway. Half-hiding his face in his lapels, he scuttled up to reception, deposited a jiffy bag on the desk, mumbling something about a ‘package from his employer’, then scuttled off, out the doorway and down the stairs with the alacrity of a cockroach. An Aurum editor gingerly approached the package, which, it turned out, contained a memory stick. On that memory stick were discovered scanned-in copies of hundreds of letters sent by Prince Charles, spanning seven decades. The decks were immediately cleared at Aurum – all staff were tasked with poring over this remarkable cache of material.

Even at first glance, it was clear that this was a veritable trove. What was most remarkable was the sheer breadth of Charles’s addressees. Up until now, he was thought to have confined himself to writing to government. As well as Presidents, Prime Ministers and his Holiness the Pope, we now see that he has long considered it his business to write to a whole range of public figures from the worlds of sport, popular music, the arts and show business. From Tracy Emin to Sir Alex Ferguson. From Fiona Bruce to Michael McIntyre. From Lady Gaga and Justin Bieber to Harold Pinter and Charlie Sheen. He has taken the trouble, as future King, to establish a rapport with these famous individuals, express his admiration, give career advice where appropriate, attempt to involve them in his own good works (Outward Bound, the Prince’s Trust) or simply to ask them who, exactly, they are.

There are recurring correspondences. He has a jovial, backslapping rapport with former Deputy Prime Minister John Prescott, for example, to whom he writes frequently, although sadly we are not privy to Mr Prescott’s responses, if any, to the Prince’s thoughts and suggestions. His Highness also corresponds with regularity to Eileen Derbyshire, better known as
Coronation Street
’s Emily Bishop, whom he appears to regard as a mother figure, of the sort he perhaps lacked in his formative years.

We see Charles at his best tussling with the great minds of the day, including Jean-Paul Sartre on the topic of existentialism. As he patiently explains to the Frenchman, it’s not just about ‘being’, it’s about ‘doing’ – getting things done – the Charles philosophy, arguably the superior one, in a nutshell. He also upbraids Sir John Betjeman and Ted Hughes when he suspects that their hearts are not always in the verses they submit when called upon to commemorate important Royal occasions.

For Charles, correspondence is a means of expressing his most profound speculations about life, the Universe, the self, the soul. Hence letters addressed to Mankind, to the leader of any party of aliens to have established first contact with planet earth, to God and to the plant kingdom, with whom Charles has long pressed for a meaningful dialogue.

A picture emerges, too, of Charles’s family, through illustrative anecdotes peppered throughout the correspondence and in letters to the likes of HRH Princess Anne, the late Queen Mother, Prince Philip and the Queen herself. At times we sense a certain distance in these relationships and yet they prove revealing of precisely the level of esteem in which Charles is held by other Royals, even if that level is not always high.

Charles is also a man of paradoxes; one who believes that in order to go forwards we must go backwards, and that while there are many alternatives there is, in the case of the Monarchy, for example, no alternative. Charles is a man who is very, very concerned. About everyone and everything. And that concern invariably hovers around the level of tremendous, often hitting the heights of ‘extremely’. He at once avoids dogmatic, precise prescriptions and the woolly, bureaucratic rhetoric of inaction. Something, he says, firmly, time and again, must be done. What that entails is a detail he leaves to smaller men – technicians, functionaries and so forth.

There cannot be discounted the possibility that the letters are not in fact, genuine; an elaborate literary hoax. Certainly, some of Charles’s correspondents appear to be under the impression they are counterfeit, to the Prince’s occasional exasperation, as it means his letters too frequently end up going ignored altogether.

Surely, however, a hoaxer, motivated by malice and mischief, would not go to so much trouble to create the flattering and impressive picture that emerges of the Prince from these correspondences – a man constantly striving to get past the material distractions of modern life, back to the soil and to the soul, back to a golden age where balance and harmony were reconciled. A man not afraid to use what he calls the ‘non-intellectual realm’ of the mind, as inspired by his mentor Laurens Van Der Post. A man who at once strives to be an ‘ordinary chap’, as much a fan of Status Quo as the next, yet who deep in his heart realises that the role for which he is constantly grasping is potentially a huge one, embracing all faiths, all species, and which straddles both the material and non-material worlds.

We must accept, then, on balance, that these are the definite article – but who was responsible for the leak of these letters, some written in Charles’s childhood, others composed only a few months ago? It seems hard to believe that it was any member of his staff, who at all times show themselves to be one hundred per cent amenable to absolutely every thought and idea expressed by their employer. This surely cannot be because they know, to coin a phrase ‘which side their bread is buttered’ but is more likely out of genuine inspiration at his Vision.

Perhaps a clue lies in the note which accompanied the memory stick, only discovered days later, having dropped from the jiffy bag and become attached to the bottom of a chair leg. It is anonymous; it reads as follows:

To whom this may concern

Look here, one can’t tell you how one got hold of these letters but, you know, I really think it would be appalling if they never saw the light of day. One has sweated over them – that is to say, Charles, sweated over them – and hang it all, some of us believe he’s a jolly misunderstood ‘fellow’, who ought to have been King a jolly sight sooner than he’s going to be, while Mama – his Mama, our Queen – continues to be so bally ‘stubborn’. Do what you will with these, there’s good fellows. You’d be obliging your future Sovereign, who knows nothing about all of this, but would definitely, absolutely approve. These letters show the real Charles – unlike myself, who is not the real Charles, I must make that clear. Nor is it either of my brothers, or my sister for that matter.

We may never know the true identity of ‘Mr X’. However, we are eternally in his debt for providing us with a quite extraordinary glimpse into the mental workings of our future King.

Leaders of Britain (For a Short While )

I’ve been thinking a lot about politics and I’ve decided that I’m a supporter of the Labour Party. I know you’re for the Conservatives, but that’s all right – it’s just that I’m for Labour.

I think everyone should have absolutely equal shares. At the end of every month, they should count up just how much money the country has made that month, then take the number of grown-up people in the country and give each of them exactly the same amount. They could send them the money by postal orders with those whose names begin with ‘A’ to ‘D’ getting theirs on a Monday, ‘E’ to ‘G’ getting theirs on a Tuesday, and so on to stop there being queues at the Post Offices.

Of course, the Royal Family would have to get extra because we’ve got special duties and things we need to look after, like the Crown, the Throne and all the dogs, but I think it would work jolly well for everyone else. Oh, and everyone should wear top hats, not just the posh people … and they should be MADE to wear them, even if they don’t want to, because that’s being equal.

In our Geography class we had to read up today about the population explosion. Our teacher says we are making too many babies. If there’s a population explosion, I don’t mind sharing my room with Andrew but I’m NOT sharing with Anne because she’s a girl and she’ll just clutter everything up with her dolls and horse things. But then she would get to have a room to herself, which isn’t fair because I’m sharing with Andrew. So we should agree that if Mummy makes another baby, then Anne should have to share her room with the new baby, who might be a boy or a girl. Would you share your room with the Chancellor of the Exchequer?

Speaking as a prince and a mature schoolboy looking forward to being a grown-up of the future, I am writing to congratulate you on becoming Prime Minister and wish you well in forming my mother’s Government.

I was very excited by that speech you made about the ‘white heat of technology’. Last Christmas, I was given a Meccano set by my Uncle Dickie and it’s provided me with heaps of fun. I expect by the year 2000 pretty much everything in the whole world will be made out of Meccano, which is quite thrilling in some ways but also a bit of a worry. Will it all stay up? Mine often doesn’t. I don’t think I have a future in architecture!

Well, must dash – I have a short meeting with Father. By the way, you’ve met Ringo Starr. Could you ask him why he hasn’t replied to the letter I sent him?

On behalf of myself and my sister and two brothers, I’d like to take this opportunity to congratulate you as you ‘set sail’ on your leadership of a new Conservative Government. I must say, I’m inclined to think British politics is a bit like a ‘see-saw’, with Labour on one side and the Conservatives on the other, and it would be interesting to see how the Liberals fared if they were given a chance under Mr Thorpe. I think that’s what the vast majority of sensible people would like to see, although they never seem to vote for it, which is rather queer. But you’re in charge now, so I suppose we all just have to hope you do a good job.