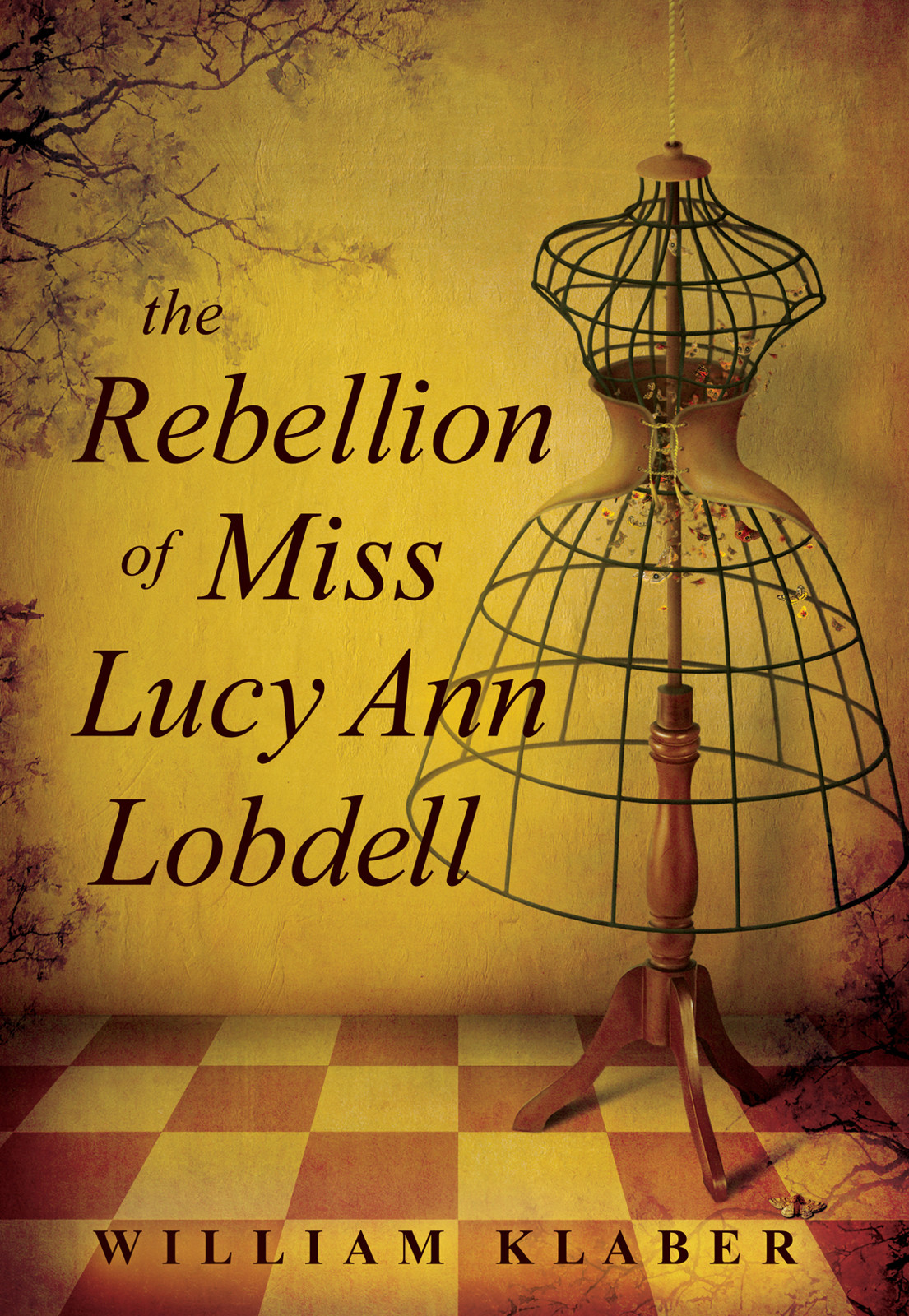 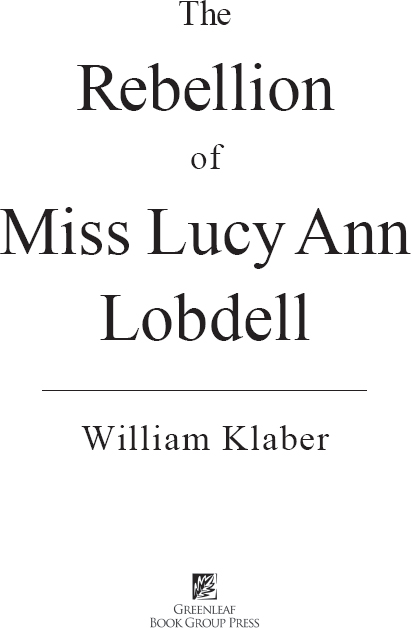 This book is a work of fiction. Names, characters, businesses, organizations, places, events, and incidents are either a product of the author’s imagination or are used fictitiously.

No part of this book may be reproduced, stored in a retrieval system, or transmitted by any means, electronic, mechanical, photocopying, recording, or otherwise, without written permission from the copyright holder.

Printed in the United States of America on acid-free paper

I intend to write a book in which I shall give a full account of my adventures whilst I adopted male attire.

Assuming the name of Joseph Lobdell, Lucy went about the country as a music teacher. While teaching at a school in Bethany, Penn., she won the love of a young lady scholar, a member of one of the leading families of the village.

T
HE TRAIN WAS late the day I ran away. Those waiting stood quietly—the women tightening their shawls, the men taking turns looking up the tracks. When it finally came in, the southbound number seven snorted and hissed, its damp breath spilling over the travelers as they said last good-byes and dragged their belongings up the metal stairs. I stayed by the stationhouse, my reasons for leaving growing smaller by the moment. Perhaps it was all a mistake. I should turn while I could and go home.

But my heart knew what my head could only suppose—that I had to leave or surely die. So when the steel wheels began to grind, I strode toward the train, and as the last car rolled by, I took three quick steps and leapt upon its stair. With my bag in one hand and a rail of cold iron in the other, I looked back as Callicoon and everything I knew slid off into the distance.

Had it been warmer I might have stayed out on the landing, but soon enough I went inside. The car smelled of cigars and was painted green, but more than that I couldn’t say, as I took the first empty bench and lifted my newspaper. After a minute or two, I lowered it enough to let my eyes steal about. I saw pieces of faces and all sorts of hats but nothing that belonged to anyone I knew. Safe for the moment, I set the paper aside and looked out toward the river. There were no leaves yet on the trees, and as the sun flickered through the gray branches, I could see on the glass a faint reflection of myself, appearing and disappearing like a spirit trying to enter the world. The image was stranger still, for my curls were now gone. My neck felt oddly cool, and I knew the skin there was too white, even for the early spring. As for the rest of me, I was dressed in a canvas shirt and britches. My breasts were bound by a length of muslin.

I had thought in the morning that I’d fashioned a good imitation of a man, but later, at the train station, I wasn’t sure. I found myself looking away from strangers, as though my eyes were windows through which they could see in just as I saw out. A woman, of course, is expected to avert her eyes, to draw a curtain as is proper, but for a man, looking away invites suspicion.

The conductor was my nearest worry. Could I meet his gaze and not reveal myself, or would he see the eyes of a wayward woman? In his blue coat he resembled a constable, and I imagined his damp hands on the back of my neck, tossing me off the train at the next stop. For a time he seemed content to trade stories with those up front, but then he turned and began to work his way up the aisle. I went back to my newspaper and pretended to read, but I could hear his wheeze as he approached.

I held out the stub and looked straight at him. His eyes were red and runny, and to my surprise, they darted away. He had something to hide, or more likely hidden, a bottle perhaps. Without a word he punched my ticket and moved on.

The train continued its parade down the valley, announcing itself at every chicken coop and hay barn, while my thoughts, with less noise, went the other way—back to Basket Creek. At this hour, Father would be in his chair before the fire, pipe in hand—my flight yet unnoticed, for they all thought I’d gone hunting. Brother John would be out in the barn, and Sarah would be in the kitchen with Mother, making some unkind comment about me, no doubt. Mary, bless her heart, would be upstairs playing with Helen. Sarah and Mary are my sisters.

I cannot hide her, so you might as well know. Helen is my daughter, left behind.

She came into this world seven months after my husband George ran off. By then I was back at Father’s house, and the neighbor women helped at the birth. Mother was there, of course, neither gentle nor kind. Even afterward, I was merely tolerated by her, as though my daughter had been born out of wedlock.

Helen was a beautiful, spirited child, but I didn’t feel the joy a mother should. First, there was George Slater’s betrayal and then Mother’s ongoing disdain. Yes, my husband had left me, but was that my sin or his? It wasn’t even what Mother said so much as how she went about—nose in the air. A couple of months of that, and I started hunting again, in good part just to get away from her. While I was in the woods, Helen was with my sisters. In truth, I didn’t give my daughter half of what I’d given my brother when he was little. Still, we had our playful times, especially once she was up and about. After dinner I would get on my knees, and Helen would ride my back, shrieking with delight as I neighed and pawed at the floor. And when I put her to bed, I would calm her by singing the lullaby that Mother had sung to me—the one about the fairies in the meadow.

As far as paying work, there wasn’t any. Not for a woman. I earned my keep at my father’s house by chopping wood and bringing home deer meat. I liked to hunt, though for most, a woman carrying a rifle was like a two-headed calf—something to look at and turn away from. Father wasn’t bothered—he’d given me the gun and taught me to shoot out behind the barn. But brother John didn’t like it and neither did my mother. I didn’t care. They couldn’t keep me from it, and in tramping the ridgelines, I gained a taste for what it might be like to be a man. Once while in my buckskins, I met a peddler on the river road. We walked near a mile, talking the whole way, my rifle on my shoulder and my hair in my hat. He never guessed and I didn’t tell him. Nor did I tell anyone at home, but I went to bed that night feeling the excitement of it.

The autumn Helen turned three, the schoolmaster at Long Eddy, Mr. Pritchard, fell ill. I was offered his position, as there was no one else. I was good at the teaching, not just because I knew my numbers and letters but because I hadn’t forgotten what it was like to be young. I didn’t spend all my time taking the fun out of everything, which, by reputation, Mr. Pritchard did at every opportunity. I liked the work and was grateful for the appointment—grateful until I opened the school’s book and saw that my pay was only one-half that of Mr. Pritchard. I didn’t say anything, but after a few days of weighing it, I decided to stand up for myself. I wrote a careful letter demanding my due, but it never got sent. The schoolmaster became well, and that was the end of my teaching.

In the spring I became housekeeper for Raspy Winthrop, a widower with three children who lived along the river. Mother said his real name was Jasper, but I never heard anyone call him that. I went to work for him because I wanted to do my part and bring money home, but all I got was one dollar a week when men working the same hours made ten. Worse, Winthrop looked at me like I was a calf bound for market.

One afternoon while I was baking, he came up behind me—I could smell him. He put his stubby hands on my hips, but I knocked them away and told him I’d skin him like a coon if he did it again. He just laughed through his greasy whiskers, and I didn’t tell anyone. Why give the hens of Long Eddy something to cluck about? Instead, the very next evening, I had to endure Mother saying how the prospects looked good for Mr. Winthrop’s freight business, meaning him, his wagon, and two scabby mules. Ten wagons and twenty mules, it would have made no difference. How could anyone even think it? But they did. A week later, without a word of warning, Raspy Winthrop announced that he and I would be getting married, as though his saying it would make it so.

“You jus’ gotta learn,” he said, chewing the words, “which side the bread the butter is on.”

And that’s the way he, my mother, and most people saw it. If I did more work than I was already doing, got no pay for it at all, and in the bargain allowed him to take his pleasure with me, I would have, in everyone’s eyes, risen in station. For my part, I would have thrown myself off the Callicoon Bridge before sharing a bed with that man. And his proposal was an insult. Even my no-good George said that I was dear when he proposed. Believing him was my mistake, but at least he said it.

Did I protest? Tell Winthrop what a hog he was? No—not in those words. I just knew, deep within, that as a woman I could do nothing for myself or my daughter. We would learn the thin charity of others, like the widows and orphans in the Bible, allowed to pick up the stray grains of wheat. Of course, I could have heeded my father, but I didn’t. Now I was damaged, and it would be Winthrop or someone like him. I could be either housekeeper or wife, indentured servant or slave. I wanted no part of it. I took off my apron and told Winthrop that from then on he could bake his own bread and butter whatever side of it he liked.

I returned home and secretly set about my preparations. I oiled my rifle, wrapped it in burlap, and hid it in the woodshed. I walked to Long Eddy and checked the times for trains. I went down to the root cellar and retrieved the small box with the money given me on my marriage day.

Three days later I rose while it was still dark and put on a shirt and britches, clothes my brother had outgrown. I cut my hair by candlelight and wrote a note saying that I’d gone hunting. Then I went to the small bed where Helen lay asleep. She was three but still had that milk-fed smell. I kissed her gently so as not to wake her. I told her I was leaving to find work so I could provide for her—that I loved her and would return. These words were spoken true, and as I walked the Callicoon road that morning, the thought of Helen in her bed did not weaken my knees but rather gave me strength for the journey to come.