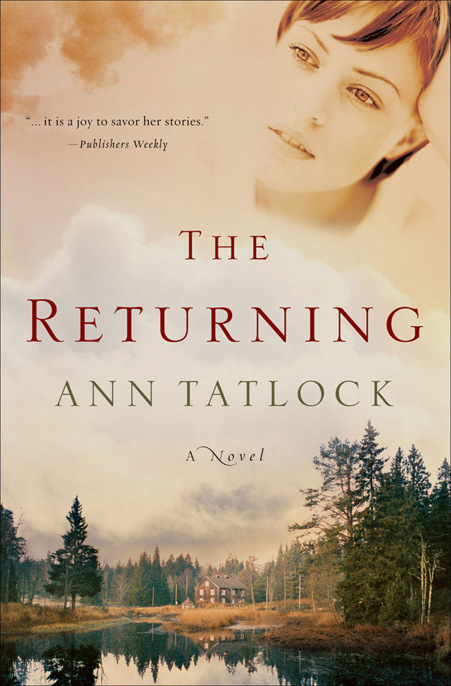 PRAISE
FOR
T
HE
R
ETURNING

“I was delighted to become acquainted with Billy in
The Returning
. He is a thoughtful, ambitious, and warm young man. Tatlock has successfully described the essence of a person with Down syndrome. Great story!”

“Once again Ann Tatlock proves she is a master storyteller and weaver. Every chapter peels back another layer of the story, another level to the characters, compelling the reader toward the end, where little is perfect, but with God it is well.”

“Ann Tatlock’s characters are, as always, richly developed and sympathetic. With
The Returning,
Ann delves into new territory—the occult, adultery—with a very real sense of foreboding that draws the reader. And, as always, Ann delivers a message of hope and truth. Her writing bears witness without preaching.”

For Viola Blake,
a kindred spirit

As always, I’m indebted to numerous folks who gave generously of their time and expertise to assist me in the research of this novel.

I’d like first of all to thank
Chris Burke
, who provided the inspiration for the character of Billy Sheldon. I’ve admired Chris since 1989, when millions came to know and love him as Corky Thacher on the hit ABC television series
Life Goes On
. Today he stays busy traveling with his band and serving as a spokesperson for the National Down Syndrome Society. Chris and his mother,
Marian Burke
, graciously agreed to read my manuscript and offer their feedback. Chris and Marian, for your help and for your kindness, I’m more grateful than I can say. God bless you.

A huge thank-you also to:

Roxann Colwell,
for reading the manuscript and making numerous valuable suggestions. Roxann is program coordinator of the Family Support Network of WNC and Resource Center, and in that capacity she works collaboratively with the Western North Carolina Down Syndrome Alliance. She is the mother of a grown daughter with Down syndrome.

Carole Hawkinson,
who sat with me on her front porch and talked about life with her son Jamie, a delightful young man with Down syndrome who was adopted from Korea.

Nancy Gossett,
whose son D.J. participates in the Progressive Education Program at one of our local high schools. He has a great sense of humor and enjoys playing the PlayStation, watching
SpongeBob
, and listening to music. But it was the fact that he loves to swim and participates in the Special Olympics that gave me an “Aha!” moment. Because D.J. is a fish in the water, so is Billy Sheldon.

I’m also grateful to a number of people in Virginia who answered my questions about drug and alcohol abuse, the workings of the legal system, and the ins and outs of prison life, probation, and parole:

And finally, a thousand thanks also to:

Julianne Presnell,
daughter of fellow writer and friend Deborah Presnell, who read my manuscript with the eye of a sixteen-year-old to make sure Rebekah Sheldon was believable. Thank you for taking time out of your busy summer schedule to do that, Julianne!

Dimitrios (Jimmy)
and
Constantine (Dino) Zourzoukis,
my neighbors and the owners of Three Brothers Restaurant in Asheville, North Carolina. Thanks for sitting down with me and giving me the inside scoop on running a restaurant. By the way, your spanakopita is the best.

Alice Denneville,
town historian, Conesus Lake, New York, who took a telephone call from a stranger and yet kindly and patiently answered my questions about life at the lake today.

Sharon Asmus,
my editor for more than a decade now. Sharon, you have unfailingly made every story better, and for that I’ll always be grateful.

He would be here soon
. The waiting was over. She’d had five long years of it, had felt every minute of it ticking by. At first his coming back had seemed impossibly far off, something that would never really happen. But here it was, the day she’d been waiting for, and now it was almost too much to believe.

Andrea glanced at her watch, then gazed back out over the lake. Another long winter had passed, and spring had thawed the water’s thick covering of ice. Now, on the sixth of June, the surface of the lake was busy with motorboats, rowboats, and jet skis. A light breeze carried the sound of laughter over the water. Andrea breathed deeply and found herself smiling. The timing was right. Even nature, in turning again to life, seemed attuned to her hope.

This had been a good place to wait, this little cottage on the edge of Conesus Lake. While it was almost too small for the four of them, it was still as good a place as any, she supposed. Certainly better than that awful house they’d owned in Virginia Beach, with its beat-up aluminum siding and decades-old wall-to-wall carpeting. She’d always felt dirty there, as if she were living in a deserted strip mall. But worse than that was the fact that Virginia wasn’t home. New York was. At least she’d had the comfort of being home these past five years.