Read The Secret Chamber of Osiris: Lost Knowledge of the Sixteen Pyramids Online

The Secret Chamber of Osiris: Lost Knowledge of the Sixteen Pyramids 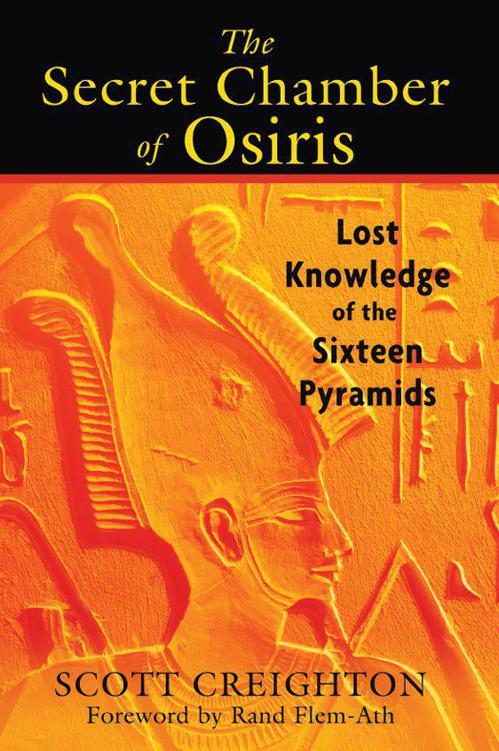 To my wife, Louise, whose generous, patient, and warmhearted nature allowed me the time and space to write this book; and to my children, Jamie and Nina, for even more of your marvelous questions—for questions truly are more important than answers. Love you all forever.

The
Secret Chamber
of
Osiris

“In
The Secret Chamber of Osiris,
Scott Creighton presents an intriguing and insightful perspective on the Egyptian pyramids, the geometry of their placement, and their relationship to a body of ancient hidden knowledge. He succeeds in presenting well-considered ideas within the context of a very readable book.”

LAIRD SCRANTON, AUTHOR OF
SACRED SYMBOLS OF THE DOGON:
THE KEY TO ADVANCED SCIENCE IN THE
ANCIENT EGYPTIAN HIEROGLYPHS

“Creighton exposes very real scientific problems and guides us along a fascinating path as he researches novel solutions and offers a radical and fresh explanation for one of the world’s oldest mysteries. Scott’s power of imagination is matched only by the discipline of his logic.”

RAND FLEM-ATH, COAUTHOR OF
ATLANTIS BENEATH THE ICE:
THE FATE OF THE LOST CONTINENT

GRAHAM HANCOCK, AUTHOR OF
FINGERPRINTS OF THE GODS

This book would not have been possible without the input, assistance, and encouragement of many individuals. I would first like to express my sincere thanks to everyone on the team at Inner Traditions • Bear & Company, whose professionalism took much of the pain out of producing this book.

To my nephew, Jim Buchanan, and my dear friends George Cummings, John Paul Servadei, and Shirley Gray—you have listened to my theories now for more years than any of us probably care to remember and have always done so with grace, good humor, and the odd provocative question. My lifelong friend Eric Watson, who sadly and unexpectedly departed this world for pastures new, would have been proud of you. Thank you all for your unstinting support over the years; it is appreciated more than you can possibly ever imagine.

Special mention must be made here also to John Ferguson, whose invaluable expertise and advice greatly assisted with some technical aspects of this book. Also to Dr Patricia Usick of the British Museum for arranging access to the Hill facsimiles and to Roger Bettridge and the staff of the Centre for Buckinghamshire Studies for providing access to the Howard Vyse archive. The Archive Department staff at the Mitchell Library, Glasgow, also deserves recognition for its generous and expert assistance in transcribing parts of the Howard Vyse journal.

My gratitude is also given to Sam Petry, Dennis Payne, and Audrey Mulertt, who each, in his or her own unique and subtle way, assisted me greatly in the development of this book.

And finally, I could not, in all sincerity, complete these acknowledgments without mentioning the Monday-night gang of Andrew, Kenny and Louise, Sarah, Tony and Trisha, and last, but by no means least, Colin; thank you all so much for keeping me mostly sane throughout the course of this endeavor. I couldn’t have done it without the craic and, of course, the beers.

Does the sophisticated positioning of the Giza pyramid complex point to a reservoir of knowledge hidden beneath the sand? This is the compelling question raised by Scott Creighton in
The Secret Chamber of Osiris.
Boldly tackling a puzzling series of inconsistencies in the record, he questions why the architects of these iconic monuments not only took on the great challenge of aligning them with north, south, east, and west but also considerably increased the difficulty of their task by including features that only appear to be functional during a solstice or equinox. In answering the questions he reveals something extraordinary subtly concealed within the very design of the complex.

Egyptologists tell us that the Giza pyramids were constructed to serve the pharaohs’ vainglory. Scott finds this hypothesis preposterous, writing, “There are simply too many anomalies, too many affronts to common sense, too many facts that simply do not fit the tomb paradigm that is so embraced by the Egyptologists.” He exposes very real scientific problems and guides us along a fascinating path as he researches novel solutions and offers a radical and fresh explanation for one of the world’s oldest mysteries.

He suggests that the people of ancient Egypt were privy to a deep and largely forgotten secret: that the Earth experiences periodic catastrophes that destroy civilization. To arm themselves against such future events, they constructed pyramids—not as tombs, but rather as reservoirs that would preserve the building blocks of civilization. These caches contained not only precious information on how best to reboot civilization but also held a sufficient store of grains to sustain the survivors as they launched their daunting task.

In
The Atlantis Blueprint,
coauthor Colin Wilson and I propose that the underlying geometry of the Giza site can be used to pinpoint the location of Thoth’s Holy Chamber (containing records from a lost civilization). Scott takes the same broad approach but concludes that a different geometric solution provides the answer. He offers good reasons to believe that Egyptian authorities are fencing off the exact location that he believes should be the focus of an excavation. These efforts include “CCTV, infrared sensors, motion detectors” as well as “metal detectors”—useful tools to keep any but the most official investigators well away from the site.

That an amateur archaeologist might be the inspiration for present-day excavations in Egypt is not as unexpected as we might think. Albert Einstein said, “You cannot solve a problem from the same consciousness that created it. You must learn to see the world anew.”
1
Seeing ancient Egypt anew is precisely what Scott Creighton has done in
The Secret Chamber of Osiris.

This engrossing book reminds us that geology, archaeology, and Egyptology were once the subjects of great minds. In the nineteenth century these disciplines were at the cutting edge of science. But in recent times our best minds have been drawn to engineering, physics, the digital sciences, and the biological revolution in all its myriad and nascent branches. The stagnation in the official branches of geology, archaeology, and Egyptology has given rise to a generation of independent researchers motivated above all by curiosity, the real driving force of science. They are not willing to accept a prevailing paradigm just because academia decrees it so.

The problems that Scott confronts are worthy of serious consideration from
our new generation of informed investigators, whose tools include an
understanding of astronomy, survey and construction techniques, geometry, world mythology, and plain old common sense—all skills frequently lacking among present-day Egyptologists.

Critical questions raised by Scott include: Why are there so few inscriptions found within the Giza pyramids? What was the purpose of incorporating massive granite blocks within the Great Pyramid? Why did the builders leave in place a pulley system that allowed entry to the so-called King’s Chamber? Why not seal the entry for eternity? Scott writes, “One has to conclude that the ancient architects went out of their way to ensure that the Great Pyramid (and its internal chambers), although reasonably secure, was in no way as tightly secure as the builders
could
have made it: it is almost as though the builders were going out of their way to
invite
relatively easy access to whatever lay within” (italics added). If this statement doesn’t pique your curiosity, nothing will!

Scott also takes us deep inside the mysterious motives of Colonel Richard William Howard Vyse, whose dubious discoveries set the compass for much of which is still taken as gospel by Egyptologists. Not only does Scott reveal new facts about the case, he also suggests a relatively simple empirical test that could once and for all determine Howard Vyse’s veracity. Chapter 6, “Gunpowder and Plot,” is a welcome addition to the cause of keeping the field honest.

Having spent decades trying to unravel the mysteries of the termination of the last ice age, I find that “Ages of Deluge and Drought” is a chapter that tackles subjects close to my heart. Although our conclusions differ somewhat, Scott has done a thorough job in articulating the problem. The point where we concur is important: the ancient Egyptians believed in cyclical time, which suggested to them that deluges that occurred in the past would inevitably be echoed in the future. And we both maintain that traditional geological explanations are incapable of resolving the mystery of the relatively rapid changes in ocean levels exhibited at the termination of the Pleistocene, not to mention the phenomena of massive extinctions and migrations of people across the globe. We both explain worldwide myths that depict a great flood, falling skies, and stars that appeared to change position as the fearful legacy of ancient people who suffered a terrible catastrophe.

For those curious about the ever-intriguing mystery of how the ancient Egyptian builders manipulated the massive stones used in the construction of the pyramids, the author presents a novel and fascinating solution—one that has hitherto been missed.

Scott’s power of imagination is matched only by the discipline of his logic. He is not afraid of the difficult questions nor is he shy in admitting the lure of the mysterious. “The most beautiful thing we can experience is the mysterious. It is the source of all true art and all science,” said Einstein. “He to whom this emotion is a stranger, who can no longer pause to wonder and stand rapt in awe, is as good as dead: his eyes are closed.”
2
Scott’s eyes are most definitely wide open!

R
AND
F
LEM
-A
TH
is a Canadian writer, librarian, and independent scholar. He has coauthored several books with his wife, writer Rose Flem-Ath—
When the Sky Fell: In Search of Atlantis
and
Atlantis Beneath the Ice
—and also with British writer Colin Wilson for
The Atlantis Blueprint
. He lives in British Columbia, Canada.