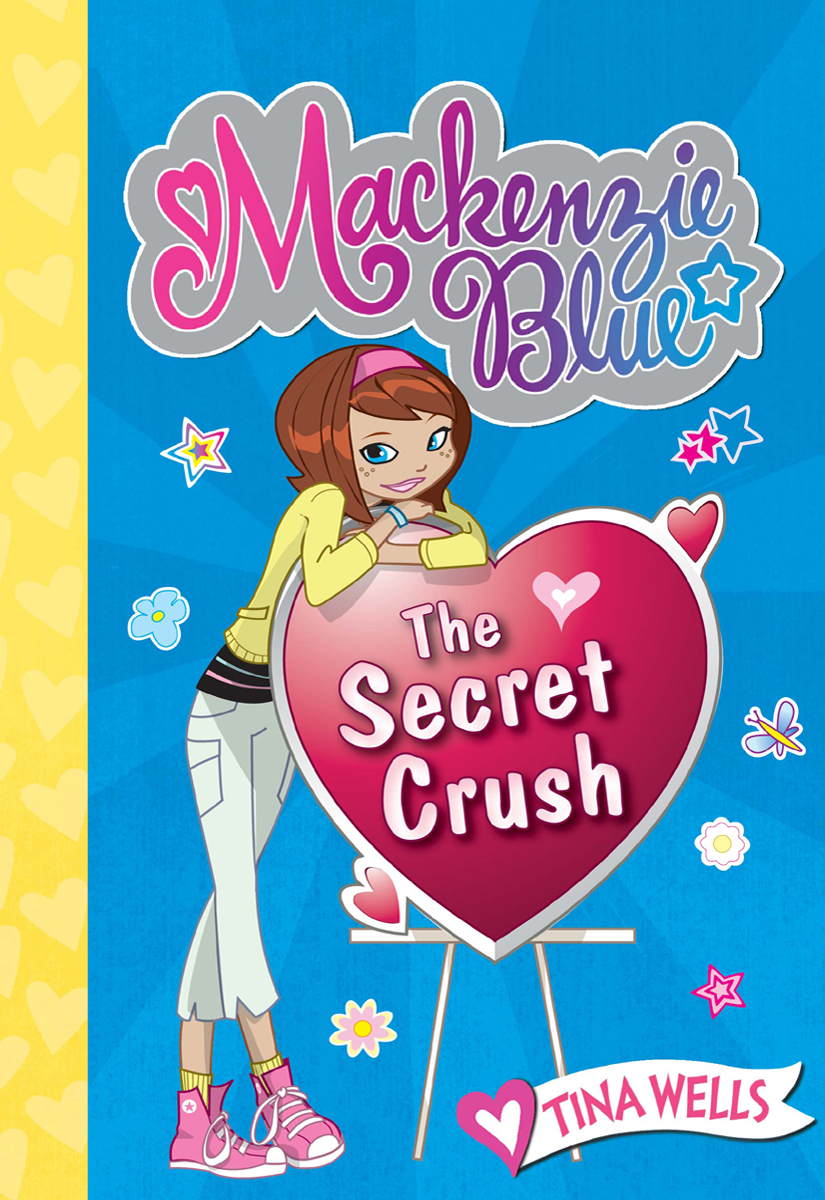 The Secret Crush
By Tina Wells

For Dr. Courtney Carter, who taught me how to write a
“darn good sentence”

The New Girl (and Boy)

The Show Must Go On

Other Books by Tina Wells 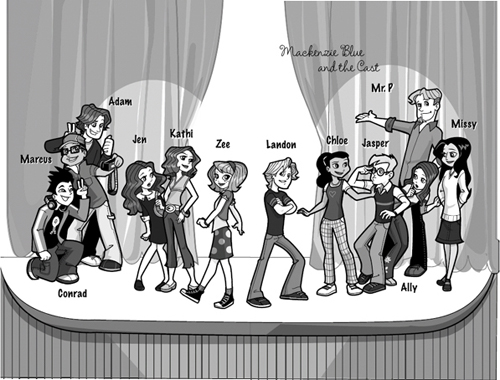 “A
nyone else?” Mr. Pâshort for Mr. Papademetriouâlooked at the seventh graders in his instrumental music class. He held a black dry-erase marker, ready to write on the whiteboard at the front of the classroom. The students sat silent. “Come on. We're brainstorming names for our band. There's no such thing as a bad idea.”

Landon Beck flicked his head to move the sun-bleached bangs that hung slightly over his eyes. “How about Seven Up?” he suggested. “You know, 'cause there are seven members of the group.”

That's an amazing idea!
Mackenzie Blue Carmichael thought. Of course, Landon was so cute, everything he said sounded great.

“Good one!” Kathi Barney cheered from the seat in front of Zee. Kathi's positive reaction didn't surprise Zee. She and Landon used to be a couple in sixth grade. Most of the time, Kathi acted like they still were.

Mr. P wrote quickly, putting each suggestion on his list under the ones that were already thereâthe Firecrackers, Cinnamon Toast, and Time Zone.

Zee adjusted the headband that she'd put into her red bob that morning. She had decorated it with tiny pink-and-purple plastic rhinestones from the craft shop. “How about the Zippers?” Zee suggested.

Kathi groaned as Mr. P wrote Zee's band name suggestion on the board. “Why? So it can be like Zee and the Zippers?” she asked. “No way!”

“It's brilliant!” Jasper Chapman defended Zee. Jasper had moved to Brookdale from London over the summer, and he was one of Zee's best friends.

“Thanks,” Zee mouthed, giving Jasper a thumbs-up. He smiled. 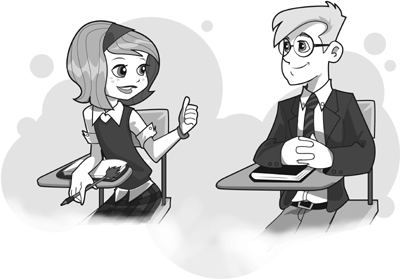 Slumping forward a little, Kathi let out a bored sigh. Chloe turned to her and stared with expectant eyes. “Everything all right, Kathi?”

Kathi just brushed her shiny, long brown hair off her shoulder. “Of course,” she said, without turning around.

But there was another groan, and this time it came from the seat beside Zee.
Jasper?
Zee wondered.
What's up with that?
Jasper turned and gave her another smile.

“How about the Beans?” Kathi suggested.

“That's awesome!” Jen said. Usually, she said
everything
Kathi did was awesomeâjust to make her happy. But this time Zee agreed. The whole class started buzzing.

“It's unanimous!” Mr. P said as he erased the list on the board. “You are officially the Beans.” The class cheered. “Nice work, Kathi,” their teacher continued. “There are people who have been in the music business for decades who couldn't have come up with such a good name.”

Kathi looked down as if she was embarrassed by all of the attention and doodled in the spiral notebook propped on the desk in front of her.

Chloe nudged Zee with her elbow, then pointed to Kathi. Zee stretched to look over Kathi's shoulder to read what she'd writtenâ
Kathi Barney and the Beans
. Zee rolled her eyes at Chloe, and Chloe held back a giggle. 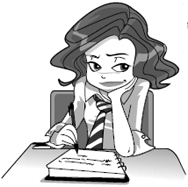 “So how are we going to introduce the band?” Mr. P continued.

Marcus's eyes lit up behind his black plastic glasses. “Hi,
we're the Beans?” he joked.

Mr. P smiled. “That's a good start. Then what? We're going to be more than just another school band, right? We rock!”

“We could do a concert,” Jen said. “Kathi could be the lead singer.”

“How 'bout if we plan a dance for the whole school?” Chloe suggested.

Kathi pivoted in her seat to face Chloe. “You mean like a hoedown?” she asked.

Mr. P nodded. “A dance
is
a fantastic idea, but I'm not sure it would show off all of your talents.”

“We could do a musical,” Kathi said.

“Awesome!” Kathi said. Zee and Kathi looked at each other and froze. They couldn't believe that they liked each other's ideas.

“We could write it ourselves,” Marcus said.

“
That's
what I'm talking about!” Mr. P agreed. “Everyone in favor of the Beans putting on a rock-and-roll musical, raise your hand.”

Once again, all hands went up.

“Ooooh, I can't wait!” Kathi said, clapping her hands together. “It will be so much fun to be the star!”

When Zee got home from school that afternoon, she immediately changed out of her uniform and into her new favorite T-shirt and her perfect-shade-of-pink ruffle skirt. Then, sitting among the piles of clothes she
didn't
put on, she began to write in her diary. 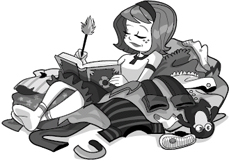 I don't know how I survived without you today. So many totally exciting things happened with the bandâthe Beans. I left you at home because I was scared about losing youâor having someone (Kathi!) take you again and blab all my secret thoughts to the world. Like she did the first day of school. But if there was one thing that whole horrible event taught me, it's that I cannot live without you. SO I've decided to lock you up, take you to school with me from now on, and never, ever, EVER let you out of my sight. That way when I need to write down my thoughts, I can. Like NOW!

Words That Describe My Life

Zee stopped writing and tickled her cheek with the white feather she'd glued to the top of her pen.
Hmmm,
she thought, rereading her words. Nope. None of them described how great she felt.
That
word had not been invented yet.

“Fantabsome,” Zee said out loud. “It shouldn't take long before everyone's saying it!” Satisfied, she closed her diary and locked it. Then she slipped the braided red cord that held the key around her neck. “If I ever lose my diary againâwhich I won't,” Zee told herself, “it's going to be impossible for anyone to read it.” She dropped the small book into the black schoolbag that she'd decorated with pink and yellow felt flower cutouts.

Next stop? The computer. Zee owed her BFF, Ally Stern, an IM.

Actually, that was one thing that was not fantabsome about Zee's life. Zee and Ally had been BFFs since preschool. Then, over the summer, Ally announced that her
parents, who were journalists, were moving their family to Paris, France. Zee missed her, but she liked hearing about Ally's new lifeâamazing French fashion, French food, and best of all, French boysâby IMing and emailing as much as possible.

SPARKLEGRRL: LOL! Not in Paris. In London 4 the weekend. I get 2 speak English!

SPARKLEGRRL: The food is BLECH!

E-ZEE: LOL! U r getting spoiled.

SPARKLEGRRL: Is that so bad?

E-ZEE: It means I'm going 2 b in a REAL band, and I have THE BEST music teacher on the planet.

SPARKLEGRRL: LOL! U r so psyched.

SPARKLEGRRL: Have u 4gotten about all the horrible stuff that happened w K?

E-ZEE: It's already going gr8. K and I r actually getting along.

SPARKLEGRRL: Watch out! It could b a trick.

After the friends logged off, Zee unlocked her diary.

Ten Ways to Get Along with Kathi

Zee stared at the page, then struck through the first word.

Five Ways to Get Along with Kathi

Way to Get Along with Kathi

Zee looked at the empty space on the page and sighed.
This is going to be harder than I thought!