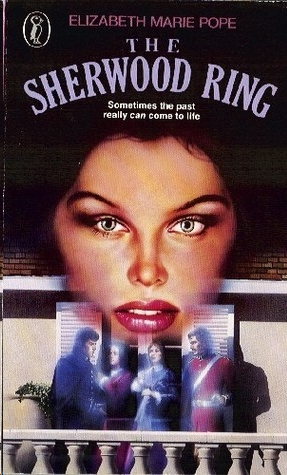 First published in the United States of America by Houghton Mifflin Company, 1958

The Girl on the Horse

ANYWAY, I said savagely to myself as I tried to lift a large and very clumsy suitcase down from the baggage rack, anyway, it
is
my father's old home, and I've always liked antiques, and I suppose an ancestral house is always more interesting than — "Oh, drat it! Ouch!"

"If you'll allow
me,
miss," said the conductor reproachfully.

Only about twenty minutes more.

Feeling suddenly weak in the knees, I sank back on the hard train seat and glanced again at the gloomy landscape lumbering past the window. I had always heard that upper New York State was beautiful, but it certainly was not on a gray late afternoon in May, with the clouds blowing in rainy gusts off the low hills, and the barns and trees and little white farmhouses all huddled together as if trying to shelter themselves from the wet. The train window was so dank with mist anyway that it was hard to see anything at all except the reflection of my own dark figure hunched down under the baggage rack in my black tweed coat and hat.

The tweed coat had been green when my father bought it for me in London that spring, but the nice old landlady at the little Scottish inn where we were staying when he was taken ill had firmly sent it out to be dyed the day before the funeral.

"No doubt but that Ian MacDonald will make a poor hand of the dyeing," she had remarked, patting my shoulder in a motherly way; "but it will be ready the morn, and better for you than having no blacks for your father at all."

Ian MacDonald had indeed made but a poor hand of the dyeing. The coat had come home shrunken, curiously streaked and rusty looking, with two buttons broken. But it was black, undeniably black — and kind old Mrs. Campbell had looked so pleased over her thoughtfulness for me that I simply did not have the heart to tell her that nothing would have shocked my father more than the idea that I was wearing mourning for him at all.

The truth was that my father did not really like me very much. You could not blame him. An artist and a traveler, he should probably never have married at all — certainly he should never have been left with a squalling newborn baby on his hands when my mother died. As long as he could afford it, he had merely dumped me on a succession of nursemaids, schools, and camps while he wandered. When he could no longer afford it, he had taken me along with him on the strict understanding that I was to keep quiet and stay out from under his feet as much as possible. In all the seventeen years the only time he had ever spoken to me with any tenderness — if you could call it that — was the afternoon of the day before he died.

"I've been a bad father to you, Peggy," he had said suddenly, turning his head on the pillow to look at me. "I've — what's that expression Mrs. Campbell always uses? I've made but a poor hand of you."

"Don't talk nonsense!" said my father briskly. "If I hadn't been a selfish fool, there'd be enough money left to send you to college and get you fairly started in the world. As it is, I can't do anything except ship you back to Enos at Rest-and-be-thankful. I wrote to him yesterday after I saw the doctor. He'll be expecting you."

There was a blank pause while I tried to grasp what he was talking about. I was used to my father's casual way of announcing his plans ("You'd better pack your bags, Peggy; we're leaving for Italy in the morning"), but this was really a little too much.

"Enos — he's your older brother, isn't he?" I ventured at last. "I don't seem to remember anything about a place called Rest-and-be-thankful."

"Why should you?" my father snapped. "I never remember it myself when I can help it."

Then he grinned unexpectedly.

"You'd better not let Enos know I said that," he added. "He probably thinks I spent half my time holding you on my knee telling you fairy tales about the ancestral estate. That's the kind of man he is."

"Is Rest-and-be-thankful the ancestral estate?"

"In every sense of the word." My father made a face at the thought of it. "The first Enos Grahame — he was one of those impossible Highland chieftains who rebelled with Bonnie Prince Charlie and had to flee from Scotland in the customary fishing boat afterwards — the first Enos Grahame came to Orange County in New York and built the place in 1749, I think it was. He named it after that resting place on the hill at Edinburgh. The Grahames have been there ever since, accumulating family traditions. You probably know the sort of thing I mean."

"A bed George Washington slept in?"

"Two
beds — he stayed with us twice. Also Lafayette, Alexander Hamilton, Benedict Arnold — no, I'm wrong, Benedict Arnold only came to dinner, but we still have the wineglass he drank from. There's even a rock in the garden Fenimore Cooper is supposed to have stubbed his toe on during a garden party in 1842. I used to think I'd go crazy sometimes listening to your Uncle Enos moon about them all. The whole family were always a little beside themselves over Rest-and-be-thankful, but your Uncle Enos was the worst of the lot. Would you believe it? The last time I saw him, he said with a perfectly straight face that as long as he owned the place the first Enos Grahame could come back whenever he liked and find the whole house just as he remembered it! I told him I could think of better ways of spending my time than trying to make life comfortable for a pack of ghosts I couldn't even see. That did it!" My father chuckled unrepentantly. "Never saw Enos so mad in my life."

"Well, you have to admit it wasn't a very nice thing to say."

"That he was keeping a pack of ghosts? Oh, Enos wouldn't have minded that so much — matter of fact, he'd probably have taken it as a compliment, the fool! It's not being able to see them himself that gets under his skin. Well, if I were a ghost I don't know that I'd bother appearing to Enos either; but he seems to think that being the head of the family ought to have given him some sort of priority, and — the truth is, Peggy, if they
do
happen to get after you, it might be a good idea not to mention it. He'd never forgive you."

I could only stare at him helplessly.

"Never mind arguing about it now," my father interrupted me. "Wait till you see Rest-and-be-thankful; then you'll understand. And take that look off your face! They're not supposed to rattle chains or flap about wailing in misty sheets. All they do is come around sometimes when they happen to feel like it. You probably won't be able to see them anyway — Enos never has, and neither could I, though Great-Aunt Emily used to say that she got to know some of them quite well when she was a girl. And of course Louise was always trying to make out that she could see them too, but she was such an awful liar that I never believed a word of it."

"My little sister. You can forget about her. She got married a good many years ago and is making life miserable for some chapter of the D.A.R. out in the Middle West. She and Enos had a fight over one of the family tea sets she wanted to take with her, and he hasn't spoken to her since that I know of."

I gulped. It was beginning to sound as if a live Uncle Enos would be even more difficult to get along with than a whole houseful of ghosts, even regular ghosts of the misty-sheet variety.

"Oh, he's all right if you just don't expect him to love you any better than a family tea set," was all the comfort my father gave me. "Of course, Enos always was a queer fish, and living alone so long with his everlasting antiques and family traditions has made him queerer than ever. But I don't think you have anything to worry about. I've brought you up not to be a nuisance; you ought to be able to look after yourself. You can't expect him to change his ways for you, of course. Just be quiet and don't bother him any more than you can help — Oh, that reminds me." He sat up suddenly against his pillows. "I told Enos in my letter that you were accustomed to looking after yourself and he needn't trouble about meeting you. Send him a telegram when you arrive at the airport and then take any train on the railroad that stops at a little place called New Jerusalem. That's where you get off."

Only about twenty minutes more now.

I looked up. The conductor was standing beside me again — a roly-poly little man with white hair who looked as if he wanted to smile but wasn't quite certain how I would take it. "Excuse me, miss," he repeated, "but would you by any chance be going to a place called Restenbeethankful?"

The conductor, his smile broadening, told me that I looked very much like my grandfather, who had gone fishing with him when they were boys, and also like my father, who had traveled up and down regularly on that particular train when he was at school and college.

"And it was that put me in mind of something I thought I'd better ask you, miss, just in case. Not that I want to butt in or anything, only — did you fix it up with your uncle to be met at the station?"

"Walk!" The conductor almost dropped his ticket punch. "But you can't be going to do that, miss! Why, it's six miles outa town, and wet, and back roads all the way."

"Six
miles?"
I could feel my heart like a lump of ice sliding down my backbone into my shoes.

I wondered desperately whether my remaining money would run to hiring a taxicab and decided that it would have to.

"But there ain't no taxi in New Jerusalem, miss," said the conductor when I asked him. "It's only a little place, and most folks have cars. Ted Lowry at the garage used to keep an old Ford he hired out, but it breaks down more'n it runs, if you see what I mean, and anyway he's rented it now to some professor from England who's boarding at Mrs. Dykemann's. No — what I had in mind was that you might want to do what your father did back in the old days when he came home unexpected. Three forty-five we'd stop to pick up some milk off a loading platform, edge of Tatlock's big dairy farm. I'd take his bags on to New Jerusalem and he'd cut down through the hay field to the road by Martin's Wood. It ain't more'n a mile and a half to Restenbeethankful that way."

Last Call by David Lee
Macaron Murder (with Recipes) (A Patisserie Mystery) by Lin, Harper
How to Dance With a Duke by Manda Collins
A Murderous Procession by Ariana Franklin
That Night with You by Alexandrea Weis
I Beat the Odds by Michael Oher
Gifts of Fate [Kindred of Arkadia 7] (Siren Publishing Classic) by Alanea Alder
Just One Drink by Charlotte Sloan
The Sacred Blood by Michael Byrnes
This Girl Is Different by J. J. Johnson