The Smartest Woman I Know 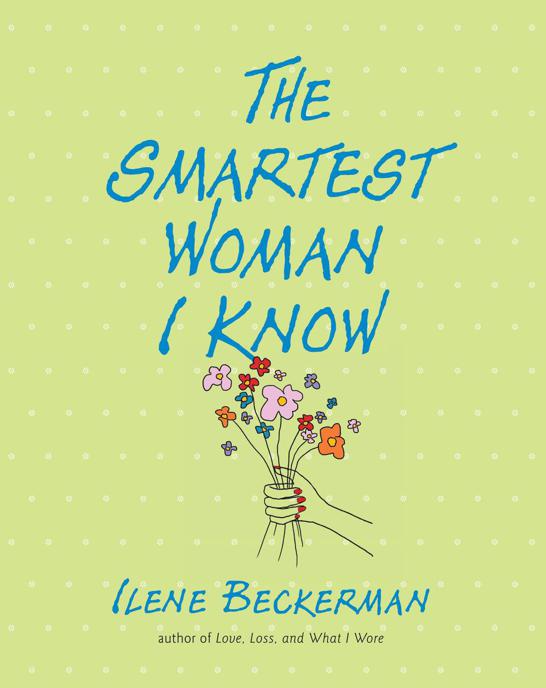 Love, Loss, and What I Wore

What We Do for Love

Mother of the Bride:
The Dream, the Reality, the Search for a Perfect Dress

Makeovers at the Beauty Counter of Happiness

THE
SMARTEST
WOMAN
I KNOW

by I
LENE
B
ECKERMAN

A Way of Life Ends. A New One Begins.

Preview of
What My Mother Gave Me

The Smartest Woman I Know

W
HOEVER SAID there’s nobody as smart as an old woman must have known my grandmother, Ettie. If she had been born in the late twentieth century instead of the late nineteenth century, she probably would have been the superstar of advice bloggers.

The older I get, the more often I think about Ettie and the more her words come back to me. Sometimes you don’t know how much you love somebody until that somebody’s gone.

I
F THE GOLDBERGS HADN’T left Grodno in Russia in the late nineteenth century . . .

If they hadn’t ended up in New Orleans and started a business tanning hides for drum heads . . .

If Lillie Young, my grandmother Ettie, then a young girl, hadn’t left the Big Apple in 1901 and traveled to the Big Easy to visit her relatives . . .

If Harry’s father hadn’t had such a fierce temper, Harry might not have taken his bride and headed for New York . . .

If Harry and his bride hadn’t settled on the Lower East
Side, both working seventeen hours a day in a candy store and saving every penny . . .

From left: Harry Goldberg, Ettie, and the New Orleans relatives

If they hadn’t saved enough pennies to buy a building to open their own candy store . . .

If it weren’t 1929 and the Depression hadn’t come at the same time that Harry was about to close on the building . . .

If the bank that Harry had asked for a loan hadn’t reneged because of the Depression . . .

If when Harry, hat in hand, went to his rich relative,
Mr. Gertz, to borrow money and Mr. Gertz hadn’t said, “You should have come yesterday . . .”

If when Harry, again with hat in hand, hadn’t gone to the Empire Trust Company on Madison Avenue and 56th Street near the building Harry wanted to buy . . .

If Mr. Smith, the loan officer, hadn’t believed in Harry and agreed to lend him the money he needed . . .

Then there never would have been a candy store called Goldberg’s in the farmland of upper Manhattan . . .

And the store wouldn’t have changed its name to Madison Stationers when the farmland turned into the ritzy neighborhood of the Upper East Side.

T
HE
S
TORY
B
EGINS

They left the safety and familiarity of the Lower East Side, where a sour pickle, a bialy, or a two-cents plain were only a block away, and moved to Madison Avenue between 64th and 65th streets. After years of living on Madison Avenue, they became gentrified on the outside but never in their hearts. Instead of a jelly donut from a pushcart on Second Avenue, Mr. Goldberg would buy a Linzer tart from
Duvanoy’s, the French bakery on Madison and 65th Street.

Instead of hanging the wash on a clothesline from the kitchen window, Ettie sent the wash to the Chinese laundry on Lexington Avenue. But every bone in their body was Jewish, and despite living in this wonderful land of opportunity, they were always on guard. The next Hitler or Stalin could be waiting around the corner on 64th Street.

THIS STORY IS MOSTLY about Ettie, all 4′10″ of her. She was one of the smartest women I ever knew, even though she never made it past the third grade.

Also in the story are:

Mr. Goldberg, who at four o’clock every afternoon, left the store and went upstairs where he and Ettie lived, to take a nap in his blue easy chair.

And God, to whom Ettie spoke several times a day . . .

You got a minute, God? I’m not really complaining but it says in the Talmud that a man has 613 mitzvahs to do but a woman only has 3. So how come I am busy from the minute I wake up in the morning until I go to bed at night, and Mr. Goldberg, who has 613 mitzvahs to do, has enough time to go upstairs at four o’clock every afternoon and take a nap?

Two other characters in the story are:

Tootsie, my sister, older than me and much prettier, who I occasionally hated . . .

I remember Tootsie going out on a first date with a boy from Westchester that year. She thought he had money. He thought she had money. Both were wrong.

I remember hiding a paperback copy of
Forever Amber
, the hottest, bawdiest book of the time in an
Adventures of Superman
comic book.

Little Fish by Ware, Kari
The Sacrificial Man by Dugdall, Ruth
Britannia's Fist: From Civil War to World War: An Alternate History by Peter G. Tsouras
Second Chances by Cardoza, Randi
Summer at the Star and Sixpence by Holly Hepburn
The Lonely Dead by Michael Marshall
The Amish Bride by Emma Miller
Isolation by Lauren Barnholdt, Aaron Gorvine
The Girl Who Raced Fairyland All the Way Home by Catherynne M. Valente
The Rough Rider by Gilbert Morris