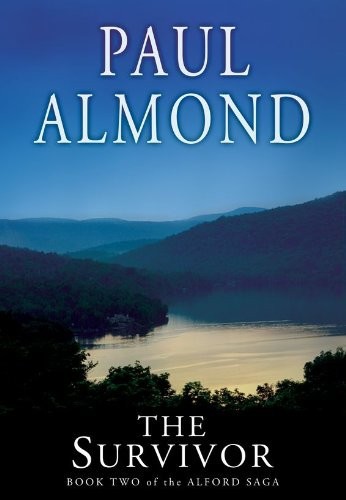 PRAISE FOR
Paul Almond’s
The Deserter

“Can you talk about thrill-a-minute Canadian history? You can now. Paul Almond has worked for many years as a TV and film director, and his skill shows in the drama and pacing of this first-rate read.”
Carole’s BookTalk

“I believe this one should be placed into the hands of every young student learning the history of Canada…. Paul Almond’s portrayal of the Mik’maq is very accurate, he embraces the true circumstances and includes the significant legends of the people.”
Mrs. Q Book Addict

“Paul Almond…has created characters with great finesse. The readerswill find themselves rooting for this likable and inspiring hero.”
The Gaspé Spec

“Readers will find this book an easy way to learn more about the English and French pioneers, and the Micmacs indigenous to the area, as they begin to create a new society incorporating all three.”
Suite 101

The Deserter
: BOOK ONE of the ALFORD SAGA

The use of any part of this publication reproduced, transmitted in any form or by any means, electronic, mechanical, photocopying, recording or otherwise stored in a retrieval system, without the express written consent of the publisher, is an infringement of the copyright law.

Design and composition by Szol Design

For Joan as always 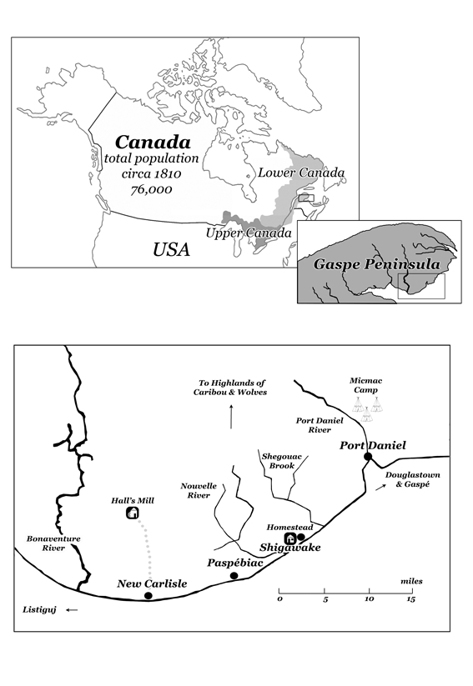 Thomas Manning strode through the woods a couple of miles back from the bay, fighting a powerful despair swarming over him like the ever-present black flies. Baby son off with the tribe, well looked after but still, wife gone, and nothing, ever, could replace Little Birch. All spring, ever since he had left his Micmac encampment up the Port Daniel river, he’d fought this battle against melancholy. But now, something drove it from his mind. The smell of smoke.

Could it be a forest fire? No, probably some settler on the move. But who’d travel inland, so far from any settlement? More likely a couple of the local Natives, passing through. Yes, having lunch. He dismissed the thought. And then of course, relentlessly, the images haunting him for the last month took over: the first time he and Magwés, his wife, had revealed their love. He had been spending the winter back in the interior with her family, and she had called him out of their wigwam. He followed her on snowshoes to a nearby hill, and then she had said, “Thomas, look up.”

He had never seen such a display. The spectacular curtain of light wavered across the Northern sky, streamers of red and purple shimmering in a filmy curtain, surely hung by some impressive Micmac deity to dazzle them both.

They stood as one, watching the light — dancing, it seemed, only for them.

In that clear, icy night, he looked down into her dark eyes, alight with the pleasure and reflection of the lights. His heart hammered as he heard her breathing grow deeper, quicker, as though she had been running. Then, at the same moment, they leaned close.

That rush of blood which flooded his lungs and his heart leapt in him again, as he walked the spring woods, and drove him to shake his head angrily, repelling the image. You’re just torturing yourself, he complained, over and over again.

He walked on, looking for the patch of blueberries in a burned area well back by the brook. He also wanted to find cranberries left over from winter, or shoots of squawberries, bearberries, or wintergreen, all of which he’d eaten with the Micmac. But most of all, he wanted to get Magwés out of his mind. Focus on your search, he told himself.

The smell of smoke intruded once again, and he stopped to test the air. Yes indeed, there, to his right, much too close, a stack of black smoke!

Nothing in his walks as a lad over the Derbyshire countryside had ever prepared him for this. Two summers ago, while working for the Robin’s Company in Paspébiac stogging a new hull with oakum, he had heard talk of these wildfires.

Ahead of him, an explosion of accumulated gas blasted the spike of a charred trunk that twisted into the air, fell, and more flames broke off to continue on the rampage.

A storm had passed in the night; the thunder had woken him in his cabin and lightning had illuminated the bare interior, but this morning, the earth outside was hardly damp. The woods did need rain; this spring had been unusually dry. Travelling over a tinder of dead leaves and pine needles since dawn, Thomas had begged the Lord Above to bring rain.

He whirled and headed for the Coast. Living among the Micmac had taught him how best to navigate these woods. But as he glanced back, he saw the fire was gaining on him; soon he’d be caught. He should never have lost himself in a welter of morbid recollections.

He looked up. Flames raced from treetop to treetop with the speed of a catastrophe; the roar reverberated through the vast woods. He’d be burned alive.

Get going! his brain yelled. But where? All at once it hit him — the brook. Yes, down in the Hollow. But where was it from here? How close? Head back, quick, to the valley’s lip. Dangerous. But how else to reach it?

Behind, the fire charged through the trees, pouring flames upwards. Smoke thickened and swirled, threatening to choke him. To his right, another spruce burst into flame. And another.

The land sloped up. Did that mean his direction was wrong? But beyond that, it might drop into the Hollow. He looked anxiously left and right — fire on both sides, galloping flames leaping from tree to tree, circling the trunks, savaging the tops, roaring as it tore at flammable needles and cones that swirled upward in buoyant plumes before falling to set other spot fires. Ahead, another tree caught fire. Surrounded.

Think, check your choices. The brook was the only alternative. He saw the tufts of trees surging with crimson fire, but below, yes — a way through. Should he risk it? Behind him, the blaze whipped up a whorl that flared into the sky. He’d stepped into an oven.

He dashed below the burning tops with flaming limbs dropping all around him. A branch struck him on his shoulder; he slapped the embers away. Ash in sudden updrafts scattered down to blind him. He blundered through scratchy branches, leapt deadfalls, got clear — and there, beyond, the woods dropped away.

Frantic, he tore over the brow and down. Too steep. He tripped and fell, over and over, somersaulting, until he struck a tree trunk. Stunned, he tried to rise, the bloodthirsty fire chasing him, but he slumped back, ankle throbbing, shoulder wrenched.

He lay still for a moment. Get up! he commanded himself. Unsteadily, he rose to his feet and set off downward. But his ankle, twisted in his tumble, gave way. He resorted to pulling himself past trunks, his shoulder hurting. Finally he reached the bottom, humped with dead trunks, fallen limbs, dead moss, dry ferns. A brook did run somewhere here, he knew that. But how far? Its gurgling would be drowned out by the raging firestorm. Downdrafts hauled smoke around him, making him cough. Even down here he could feel the heat intensify. His heart hammered and his mind swirled like the fire.

Behind, the blaze raced along the brow of the hill. Any second, it might drop down to cut off his progress. Find that brook fast.

Knots of tangled bushes blocked his way. How could they flourish under these Balm of Gilead, themselves survivors of another fire? Their heavy foliage topside was being devoured. He forced himself through more snarls of shrubbery to join a stampede of mice and voles, even a fox.

Where was that wretched brook? He plunged into a thicket, but he’d lost his sense of direction. Was he actually going in a circle? His coughing intensified, draining his energy and slowing his pace. The smoke was settling down around him, stifling his breath.

Above the flaming trees, thick clouds still darkened. Promise of rain? He prayed aloud for a cloudburst. Save me, he begged, scraping past barbed branches of spruce.

Trees exploded, limbs splintered and snapped — taking him straight back to the gun deck of the
Bellerophon
, with its roar of cannon and cracks of musketry as Naval Marines picked off sailors on their battleravaged decks. Once more he recalled exhorting his gun crew, fighting back the panic that immobilized lesser men. Keep cool, the unspoken motto of every sailor in His Majesty’s Navy. In the extremes of battle, think clearly, do your duty. He remembered Lord Nelson’s signal, fluttering from the distant
Victory,
translated by their Signal Middie astern: “England expects every man to do his duty.” How his gunnery mates had resented that! With the great Battle of Trafalgar approaching, what else would they do? What else had they been doing? Treat us like men, they clamoured under their breath, wheeling out their giant cannons in readiness: what else would we do but our duty?

So he made himself keep cool now, plunging toward the hoped-for brook. Still the explosions reminded him of the great 32s on his gun deck, as a pine beside him exploded. A gust of oxygen had struck another build up of gasses — and boom, the tree showered Thomas with flaming debris.

Race for the brook. But which way? He glanced upward as flames attacked more Balm of Gilead, and suddenly he found no surface for his feet.

Down he crashed, into the brook. At last. But too shallow. Shocked by the icy water, stunned from striking the brook stones, he tried to lift himself but fell back into the running water. He choked, then shook off his confusion, rose shakily onto all fours. No! First roll over and soak your clothes, and then your long hair.

Quickly, he struggled up. Find a deeper pool. He ran on, his feet slipping on mossy stones, and tripping. He pulled his shirt up over his head. The brook turned. Was it still too shallow? After another fall, he pulled himself out onto the bank and lurched forward. Among the crack of dry branches resembling musketry, he thought he heard shouts, as if from his men, exhorting him: “Go Thomas, save yourself, we’re with you.” His crew, his gunners...

Ooh! What a Lovely Pair Our Story by Ant McPartlin, Declan Donnelly
Ted and Ann - The Mystery of a Missing Child and Her Neighbor Ted Bundy by Rebecca Morris
Lovers by Judith Krantz
Kiss Tomorrow Goodbye by Jade, Imari
The Nazi and the Psychiatrist by Jack El-Hai
Lulu Bell and the Sea Turtle by Belinda Murrell
Mercy by Daniel Palmer
Diving In (Open Door Love Story) by Stacey Wallace Benefiel
The German by Lee Thomas
Autumn's Wish by Bella Thorne