Read The Taste of Night Online

The Taste of Night 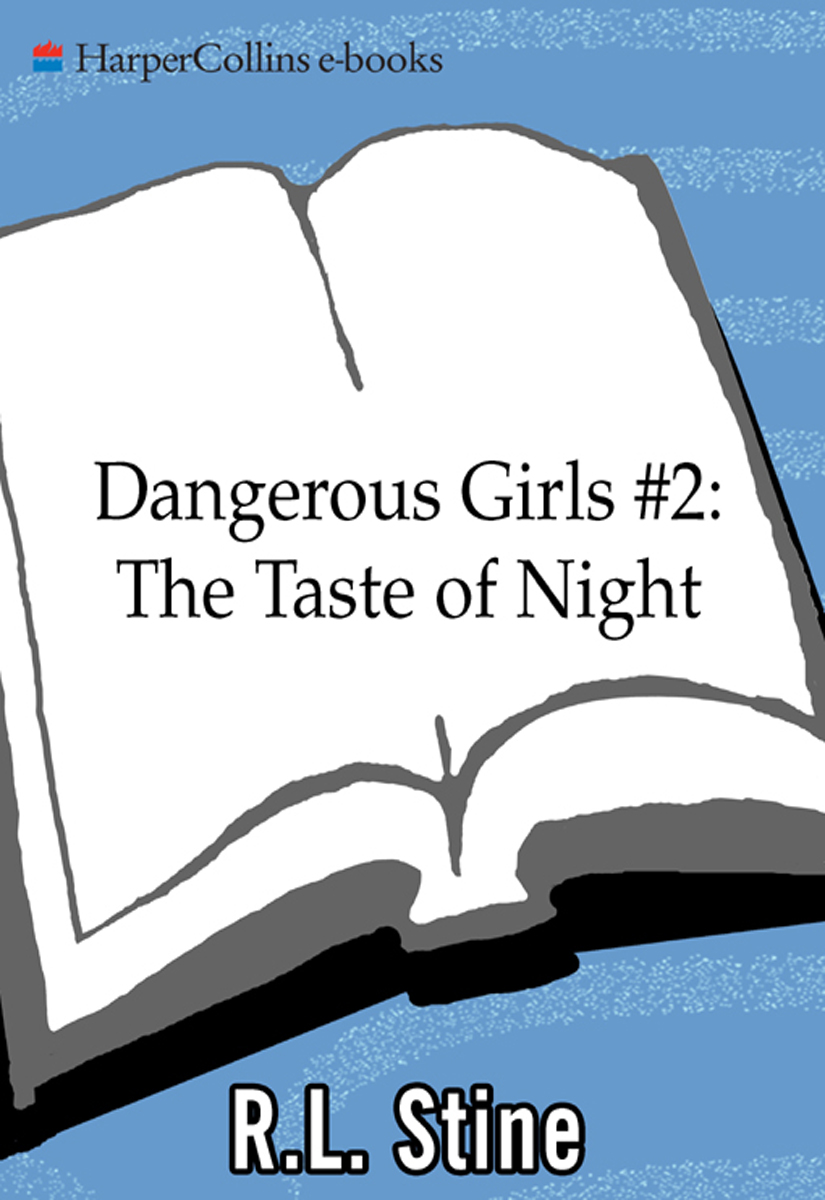 The Taste of Night

A Novel by
R.L. Stine

For Susan Lurie, still dangerous after all these years.

Chapter One:
My Sister is a Vampire

Chapter Two:
“Can You Kill Your Own Daughter?”

Chapter Seven:
The Evil at Home

Chapter Eight:
“The Monster Did It”

Chapter Nine:
The Vampire in the Tree

Chapter Ten:
Is Livvy in the House?

Chapter Fourteen:
The Taste of Night

Chapter Eighteen:
Who Is the Next Victim?

Chapter Twenty-Three:
“I Want to Go Back to My Old Life”

Chapter Twenty-Four:
A Death in the Vampire Family

Chapter Twenty-Five:
“It Won't Be Pretty”

Chapter Twenty-Six:
“I'd Like to Tear Destiny to Bits”

Chapter Twenty-Seven:
Blood on Her Lips

Chapter Thirty-One:
“You're Still Connected to Your Sister”

Chapter Thirty-Two:
A Date with a Vampire

Chapter Thirty-Five:
An Evil Creature of the Night

Chapter Forty-One:
A Vampire Must Die

Chapter Forty-Two:
“One Last Kissâ¦Before I Kill You”

part one
JULY
chapter one
MY SISTER IS A VAMPIRE

AS DESTINY WELLER MADE THE TURN ONTO COLLINS
Drive, a light rain started to fall. She squinted through the windshield, through the tiny, shimmering droplets of water, and pressed her cell phone to her ear.

“I think it's going to get really stormy,” she said, glancing up at the lowering, black clouds. “I really don't feel like going out tonight, Ana-Li.”

Her friend Ana-Li May made disappointed sounds at the other end. “I know it's hard for you, Dee. But the summer is going fast, you know. You should try to have at least a
little
fun.”

Fun? How could she be talking about fun?

Destiny clicked on the headlights. The wipers left a smear on the windshield glass. She kept forgetting to replace the blades.

“You've been really great,” she told Ana-Li. “I mean, all summer. You're the only one who knows the truth about Livvy. I mean, except for Dad and Mikey. And Ari, of course. And you've beenâOH!”

Destiny let out a cry. The cell phone fell from her hand as she hit the brakes hard. Her tiny, silver-gray Civic skidded on the wet pavement.

Startled by the sound, the girl on the sidewalk whipped her head around. Her face came into view.

A car honked behind her. Heart pounding, she lowered her foot on the gas pedal and fumbled for the phone.

She could hear Ana-Li on the other end. “What's wrong? Dee? Are you okay?”

“Sorry.” She leaned forward to squint through the smeared windshield. The rain pattered down harder. “I keep losing it. Every time I see a girl with long blond hair, I think it's Livvy.”

“That's why you've got to get out of yourself,” Ana-Li said. “You know. Go out. We'll go to a club or something. Dance our asses off. Maybe meet some hot guys. It'll take your mind offâ¦everything.”

She didn't mean to scream, but the words burst out of her in a shrill, trembling voice. “Ana-Li, my twin sister is a
vampire
! She's out flying around, prowling at night, hungry for warm blood, killingâkilling things. Iâ¦I don't know
what she's doing. I haven't seen her in two months. Do you know what that's done to my family? To my dad? My poor little brother?”

“There's
no way
I can take my mind off it,” Destiny continued. She made a sharp right, tires skidding again. She'd almost missed her turn. “I think about Livvy all the time. And Ross too. I still can't believe he went with her. Ana-Li, Iâ¦I want to see Livvy. I just want to hug her. I know it's impossible, but I want to tell her to come back to us.”

There was silence at Ana-Li's end.

“Ana-Li? Are you still there?”

“Yeah. I just don't know what to say. You know, I'll be leaving for orientation. Yale is a long way from here. I thought maybe in the short time we haveâ¦”

Destiny pulled into a parking spot at the curb in front of the familiar, low redbrick building. The rain had slowed. The wipers left a thick, gray smudge as they scraped over the glass.

That's the way I see everything these days, Destiny thought bitterly. Through a dark blur.

“Listen, Ana-Li. I have to go. I'm here, at my dad's office. I have to pick him up because his SUV broke down again. He never takes care of it.” She sighed. “He can't seem to take care of anything these days. Just stays in his lab twenty hours a day. Then he comes home too wrecked to talk or do anything.”

“Sorry,” Ana-Li murmured on the other end.

“No,
I'm
sorry,” Destiny said. “Here I am, laying all this on you again for the hundredth time. I'm really sorry. Can I call you later?”

She clicked the phone shut and dropped it into her bag. Then she took a deep breath while checking her short, blond hair in the mirror.

Ana-Li has been terrific, she thought. She's always been a great friend. After that horrible night Livvy and Ross decided they wanted to live forever as vampiresâ¦Ana-Li has always been there for me.

She slid out of the car and gazed up at the sign above the glass door:
WELLER VETERINARY CLINIC
. Yes, her dad still treated sick cats and dogs, spayed and neutered them, gave them their shots, washed away their fleas, and mended their broken bones. But he spent most of his time in his lab at the back of the building, reading, studying old books, mixing chemicals, working out endless equations, searching for a cure for vampirism.

Destiny made her way through the brightly lit waiting room, empty now, quiet except for the gurgling sounds from the fish tank in the wall. “Hey, Dadâare you ready?” Her voice echoed down the hall as she passed the empty examining rooms.

She found him hunched over the worktable in the lab, surrounded by darkness, standing under a cone of light
from the single ceiling lamp. His eyeglasses reflected the light. He didn't seem to hear her at first.

To her surprise, he had tears running down his cheeks. He crumpled the papers in his hand, then furiously ripped them in half and sent them flying to the floor.

Dr. Weller turned to Destiny, his face flushed, his eyes hidden behind the shiny glasses. “I'm afraid I have very bad news,” he said.

chapter two
“CAN YOU KILL YOUR OWN DAUGHTER?”

DESTINY'S BREATH CAUGHT IN HER THROAT. “DAD
âwhat is it?” she finally choked out. She hurried across the room and stood across the table from him, under the bright, white light.

He shook his head. “It's my work. It's going nowhere. I'm no closer to finding a cure than I was two months ago.”

Destiny grabbed the edge of the metal table with both hands. “But you'll keep trying, right, Dad? I mean, you're not giving up, are you?”

His pale blue eyes stared at her from behind his glasses, thick gray eyebrows arching high on his balding head. “I don't know how much time I have.” His voice came out in a whisper. His eyes didn't move from Destiny's. “I'm under a lot of pressure.”

He stepped around the table and put an arm around her shoulders. “A lot of pressure.” He hugged her briefly, then guided her to his small office at the side of the lab.

He dropped heavily into his desk chair, brushing back the tuft of gray hair on top of his head. Destiny stood, tense, in front of the desk, arms crossed over the front of her blue T-shirt.

“You know I have chosen two roles,” Dr. Weller said, gazing up at her. “I'm the Restorer, the one who can restore neophyte vampires to their normal lives, if they're not already complete vampires.”

I know very well, Destiny thought with a shiver. You don't have to explain, Dad. You restored
me
, remember? I was bitten too, just like Livvy. But you restored me, and now I'm fine, perfectly normal. But Livvyâ¦

“And I'm also the Hunter,” her dad continued, breaking into her thoughts. “Ever since your mother diedâ¦killed herself because of a vampireâ¦Iâ¦Iâ¦I've vowed to kill as many vampires as I can. To rid Dark Springs of thisâ¦this filthy plague.”

He rubbed his chin. Destiny saw that he hadn't shaved for at least a day or two. “My two rolesâ¦curing and huntingâ¦they don't always go together.”

“What do you mean, Dad? Destiny lowered herself into the wooden armchair across from the desk. “What's going on?”

“I've been working so hard to find a cure,” he said. “You
know. A cure for Livvy. And for Ross too. And any other vampire who wants it. And I've been neglecting my duties as a hunter.”

Destiny leaned forward, her hands tightly clasped. All her muscles tensed as her father went on.

“The vampires in this townâ¦they've become an even bigger danger. There are too many of them. People are starting to become awareâ¦”

Destiny swallowed. “You mean, that couple that was murdered in Millerton Woods last weekend?”

Dr. Weller nodded. “The police have been able to keep everything quiet. People in Dark Springs don't know about the vampires. Like your friends, Dee. Your friends all think that Livvy and Ross ran away together. Theyâ¦they don't know the truth.”

Destiny nodded. “Just Ana-Li knows. And Ari, because he was there that night. No one else.”

Dr. Weller frowned, deep lines creasing his forehead. “Well, people are starting to guess. The police have been getting calls. Mayor Hambrick has been getting frightened calls. He wants to get the governor to call in the National Guard. I can't let that happen. Too many innocent people will be killed.”

“What are you going to do?” Destiny asked.

“I have no choice. I have to get my hunters together. I have to hunt them downâand kill as many vampires as I can.”

Destiny let out a sharp cry. “Kill them?”

She suddenly pictured Livvyâ¦Livvy before this all happenedâ¦when their mother was still alive. Livvy in that sexy red halter dress she wore to the spring dance their junior year. Her hair all shimmering, cascading down her bare back. The bright red lipstickâ¦her sparkly earringsâ¦her smileâ¦

Destiny shook herself to chase the picture away.

“You can't just go out and kill vampires,” she told her father. “How will you find them?”

Dr. Weller leaned forward over the desk. He grabbed Destiny's hands and held them between his. “There's an abandoned apartment building across the river from the campus. It was supposed to be student housing, a dorm for the community college. But the construction company went bankrupt and the building was never finished.”

Destiny narrowed her eyes at him. “Andâ?”

“We think several vampires are using that building. Sleeping there during the day. Living in the apartments. I have my hunters organized. We're going there. Going into those apartments and killing as many of them as we can.”

Destiny pulled her hands free. She jumped to her feet. “When? When are you doing this?”

“In two weeksâthe next full moon.”

He nodded. “Yes. We'll go in at sunrise when they're all asleep. I wanted to warn you. I mean, if something happens to meâ¦” His voice trailed off.

“But, Dadâ” Destiny realized she was shaking. “What about Livvy? What if Livvy is in one of those apartments? Youâ¦you can't kill your own daughter. You can't!”

Destiny moved around the desk and grabbed her father's sleeve. “But she's not! She's still alive. You know she's not dead. You can't do it. You can't kill herâ
can
you?”