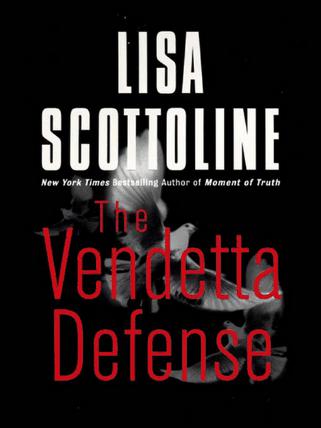 Lawyer Judy Carrier becomes embroiled in a fifty-year-old blood feud and a romance that is dangerously close to her case.
Lawyer
Judy Carrier takes the case of her career to defend Anthony Lucia,
fondly known as "Pigeon Tony," who is arrested for the murder of his
lifelong enemy Angelo Coluzzi. When her client freely admits he killed
Coluzzi because of a vendetta, Judy's troubles really begin. The Coluzzi
family wants revenge. Then there's Pigeon Tony's hunky grandson, who
makes Judy think about everything but the law.
In a case steeped in blood and memory, it will take brains and a lot
of luck to save Pigeon Tony. But if anyone might see justice done, it's
this gutsy attorney who'll risk everything -- including her own life --
to win.

Lawyer Judy Carrier becomes embroiled in a fifty-year-old blood feud and a romance that is dangerously close to her case.
Lawyer Judy Carrier takes the case of her career to defend Anthony Lucia, fondly known as "Pigeon Tony," who is arrested for the murder of his lifelong enemy Angelo Coluzzi. When her client freely admits he killed Coluzzi because of a vendetta, Judy's troubles really begin. The Coluzzi family wants revenge. Then there's Pigeon Tony's hunky grandson, who makes Judy think about everything but the law.
In a case steeped in blood and memory, it will take brains and a lot of luck to save Pigeon Tony. But if anyone might see justice done, it's this gutsy attorney who'll risk everything -- including her own life -- to win.

Running from the Law

This is a work of fiction. Names, characters, places and incidents either are the products of the author’s imagination or are used fictitiously. Any resemblance to actual events, locales, organizations, or persons, living or dead, is entirely coincidental and beyond the intent of either the author or the publisher.

THE VENDETTA DEFENSE.
Copyright © 2001 by Lisa Scottoline. All rights reserved. No part of this book may be used or reproduced in any manner whatsoever without written permission except in the case of brief quotations embodied in critical articles and reviews.

Lisa Scottoline asserts the moral right to be identified as the author of this work.

To the Honorable Edmund B. Spaeth, Jr.,
who taught me, and all his clerks, about the law, about justice, and about love.

With eternal thanks, and the biggest hug ever—

B
OOK
T
WO

B
OOK
F
OUR

A
BOUT THE
A
UTHOR

A
BOUT THE
P
UBLISHER

The conclusion arrived at then has been and always will be the same until I cease to exist; on the score of integrity there is no assault to be made upon me. My political work may be valued more or less, this way or that, and people may shout me up and howl me down, but in the moral field it is another matter.

Italians! Here is the national programme of a solidly Italian movement. Revolutionary, because it is opposed to dogma and demogogy; robustly innovating because it rejects preconceived opinions. We prize above everything and everybody the experience of a revolutionary war.

Other problems—bureaucratic, administrative, legal, educational, colonial, etc.—will be dealt with when we have established a ruling class.

T
he morning Tony Lucia killed Angelo Coluzzi, he was late to feed his pigeons. As long as Tony had kept pigeons, which was for almost all of his seventy-nine years, he had never been late to feed them, and they began complaining the moment he opened the screen door. Deserting their perches, cawing and cooing, they flew agitated around the cages, their wings pounding against the chicken wire, setting into motion the air in the tiny city loft. It didn’t help that the morning had dawned clear and that March blew hard outside. The birds itched to fly.

Tony waved his wrinkled hand to settle them, but his heart wasn’t in it. They had a right to their bad manners, and he was a tolerant man. It was okay with him if the birds did only one thing, which was to fly home. They were homers, thirty-seven of them, and it wasn’t an easy job they had, to travel to a place they’d never been, a distance in some races of three hundred or four hundred miles, then to navigate their return through skies they’d never flown, over city and country they’d never seen and couldn’t possibly know, to flap their way home to a tiny speck in the middle of South Philadelphia, all without even stopping to congratulate themselves for this incredible feat, one that man couldn’t even explain, much less accomplish.

There were so many mistakes a bird could make. Circling too long, as if it were a joyride or a training toss. Getting distracted on the way, buffeted by sudden bad weather, or worse, simply getting tired and disoriented—thousands of things could result in the loss of a precious bird. Even once the first bird had made it home, the race wasn’t won. Many races had been lost by the bird who wouldn’t trap fast enough; the one who was first to reach his loft but who stopped on the roof, dawdling on his way to the trap, so that his leg band couldn’t be slipped off and clocked in before another man’s bird.

But Tony’s birds trapped fast. He bred them for speed, intelligence, and bravery, through six and even seven generations, and over time the birds had become his life. It wasn’t a life for the impatient. It took years, even decades, for Tony to see the results of his breeding choices, and it wasn’t until recently that his South Philly loft had attained the best record in his pigeon-racing club.

Suddenly the screen door banged open, blown by a gust of wind, startling Tony and frightening the birds in the first large cage. They took panicky wing, seventeen of them, all white as Communion wafers, transforming their cage into a snowy blizzard of whirring and beating, squawking and calling. Pinfeathers flurried and snagged on the chicken wire. Tony hurried to the loft door, silently reprimanding himself for being so careless. Normally he would have latched the screen behind him—the old door had bowed in the middle, warped with the rain, and wouldn’t stay shut without the latch—but this morning, Tony’s mind had been on Angelo Coluzzi.

The white pigeons finally took their perches, which were small plywood boxes lining the walls, but in their panic they had displaced each other, violating customary territories and upsetting altogether the pecking order, which led to a final round of fussing. “
Mi dispiace
,” Tony whispered to the white birds.
I’m sorry,
in Italian. Though Tony understood English, he preferred Italian. As did his birds, to his mind.

He gazed at the white pigeons, really doves, which he found so beautiful. Large and healthy, the hue of their feathers so pure Tony marveled that only God could make this color. Their pearliness contrasted with the inky roundness of their eye, which looked black but in fact was the deepest of reds, blood-rich. Tony even liked their funny bird-feet, with the flaky red scales and the toe in back with a talon as black as their eyes pretended to be. And he kidded himself into thinking that the doves behaved better than the other birds. More civilized, they seemed aware of how special they were.

The secret reason for the doves’ special status was that they were beloved of his son, who had finally stopped Tony from releasing them at weddings for a hundred fifty dollars a pop. Tony had thought it made a good side business; why not make some money to pay for the seed and medicines, plus keep the birds in shape during the off-season? And it made Tony happy to see the brides, whose hearts lifted at the flock of doves taking off outside the church, since you couldn’t throw rice anymore. It reminded his heart of his own wedding day, less grand than theirs, though such things didn’t matter when it came to love.

But his son had hated the whole idea.
They’re not trained monkeys
, Frank had said.
They’re athletes
.

So Tony had relented.
“Mi dispiace,”
he whispered again, this time to his son. But Tony couldn’t think about Frank now. It would hurt too much, and he had birds to feed.

He shuffled down the skinny aisle, and his old sneakers, their soles worn flat, made a swishing sound on the whitewash of the plywood floor. The floor had held up okay, unlike the screen door; Tony had built the loft himself when he first came to America from Abruzzo, sixty years ago. The loft measured thirty feet long, with the single door in the middle opening onto a skinny aisle that ran the short length of the building. It occupied all of Tony’s backyard, as if the loft and yard were nesting boxes. Off the aisle of the loft were three large chicken wire cages lined with box perches. The aisle ended in a crammed feed room, the seed kept safe from rats in a trash can, and there was a bookshelf holding antibiotics, lice sprays, vitamins, and other supplies, all labels out, in clean white shelves.