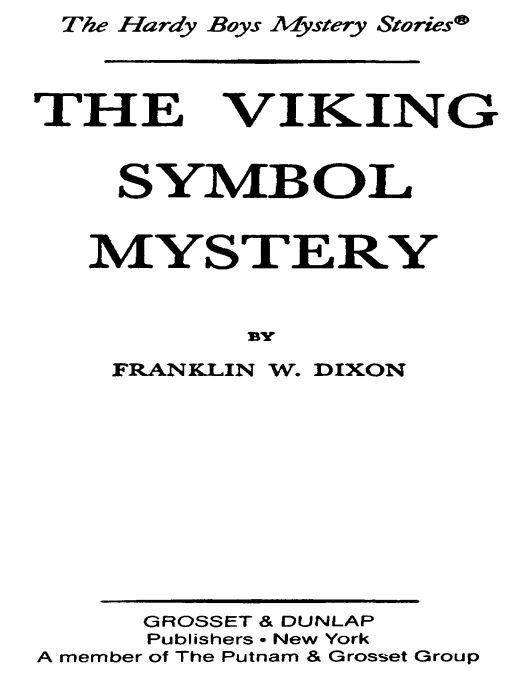 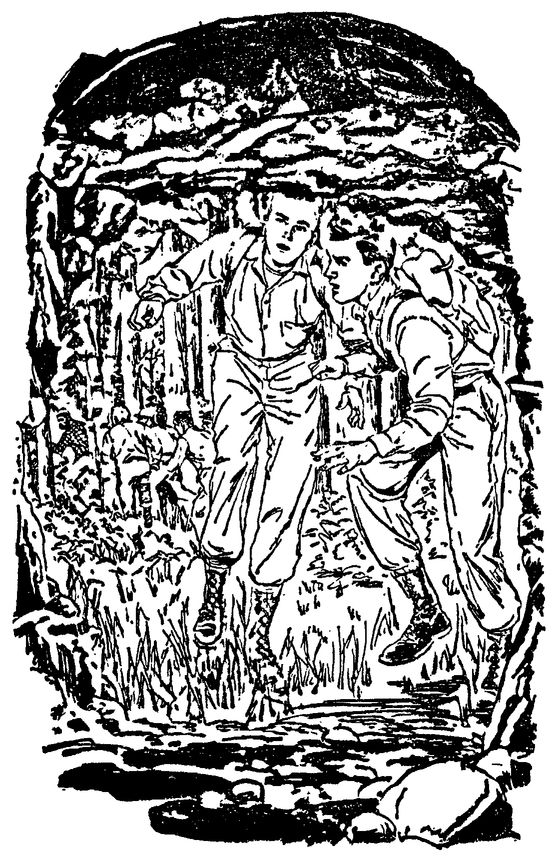 “Hurry!” Frank said. “We must find the rune stone!”

CHAPTER I
Radio Threat
“DAD, why did you want us fellows here for a meeting tonight?” asked blond, seventeen-year-old Joe Hardy.
“Is it about one of your new cases?” The speaker was Joe's tall, dark-haired, eighteen-year-old brother, Frank.
“Yes. I want you five boys to hear a radio report from Sam Radley,” Fenton Hardy replied. “Frank, warm up the two-way short-wave radio.” The tall, well-built, private investigator glanced at his watch. “It's almost nine. Sam will be broadcasting any second.”
The other boys in the room were the Hardys' palsâstout, easygoing Chet Morton, lanky Biff Hooper, and bright-eyed Tony Prito. The boys exchanged excited glances. A message from Radley, Mr. Hardy's operative, meant mystery!
Just
then a crackling sound came from the radio receiver and a voice spoke over the air waves: “Radley reporting. Investigation proceeding as planned. Latest episode is stolen float plane. Owned by guest...” Suddenly the voice faded.
“The signal's being jammed!” Mr. Hardy ex claimed, grasping the tuning knob and trying to clear the jumble of static. “Someone else must be using our wave length.”
As suddenly as it had started, the crackling disappeared. Then a strange, deep voice said:
“Stay away, Hardy!”
“That's not Sam!” Joe exclaimed, and the others stared in astonishment.
“S-s-sh!”
Frank leaped up and bent over the set.
The new voice continued:
“Hardy, stay away! You'll never get out of the Northwest Territories alive!”
The intruder became silent. There was only shrill static.
“For Pete's sakel I wonder who that was?” muttered Chet.
Mr. Hardy again adjusted the controls. The static cleared, and the familiar voice came on: “Radley signing offâ!”
“Wait!” Mr. Hardy commanded. “Couldn't catch the last part of your message. Repeat.”
“Can you hear me now?”
“Yes.”
Radley went on, “Yesterday a float plane was stolen from in front of a lodge near Yellowknife. Single engine, color brown. I will advise progress. Over and out.”
“Another theft and a threat,” Mr. Hardy said in a grim tone, as he leaned forward and snapped off the powerful short-wave set.
“What will you do?” Frank asked his father.
As he waited for an answer, the group was startled by a sudden loud
crash
outside.
“Something's hit the garage!” Joe cried out.
He and Frank dashed from the study and down the stairs. Mr. Hardy and the other boys followed the brothers through the kitchen and onto the rear lawn.
“It's our short-wave radio antenna!” Frank shouted, pointing to a high pole near the garage. From it dangled part of the Hardys' three-element-beam antenna over which the detective sent long-distance messages. The rest lay in a jumbled mass of wreckage on the ground.
“What made it fall?” Biff asked in amazement.
“Look!” Joe cried, bending down. “This was no accident!” He held up a twisted strand of rope, one end of which was tied around a metal support.
“Why would anyone want to pull an aerial off the pole?” Tony said, frowning.
“That's what I want to know,” declared Mr. Hardy. “Get flashlights and start a search for the vandals. I'll call Chief Collig!”
Joe went into the house with his father, found three flashlights in the hall closet, and rushed outside. The boys beamed their lights on the pole, and Joe held a magnifying glass, trying to detect fingerprints, but found none.
“The vandal must have climbed the pole's spikes to rig the rope,” Frank commented.
“And he wore gloves,” Joe guessed.
The other boys fanned out over the grounds, hunting for signs of the trespasser, but found nothing. There were not even footprints because the ground was hard and dry.
Just as they turned back toward the house, a police car roared up the driveway, its red roof light flashing. The car stopped and Police Chief Ezra Collig stepped out. The Hardys rushed to meet him.
“Have you found out who did this, Fenton?” the officer asked.
“Not a clue.”
“I'm not surprised,” said the tall, husky chief, who had worked closely with Mr. Hardy and the boys on several cases. “There has been some vandalism around Bayport lately. This probably is another example of it. Some prankster's idea of fun!”
Frank and Joe glanced at each other.
“I'm afraid it has something to do with Dad's new case,” the older boy said. 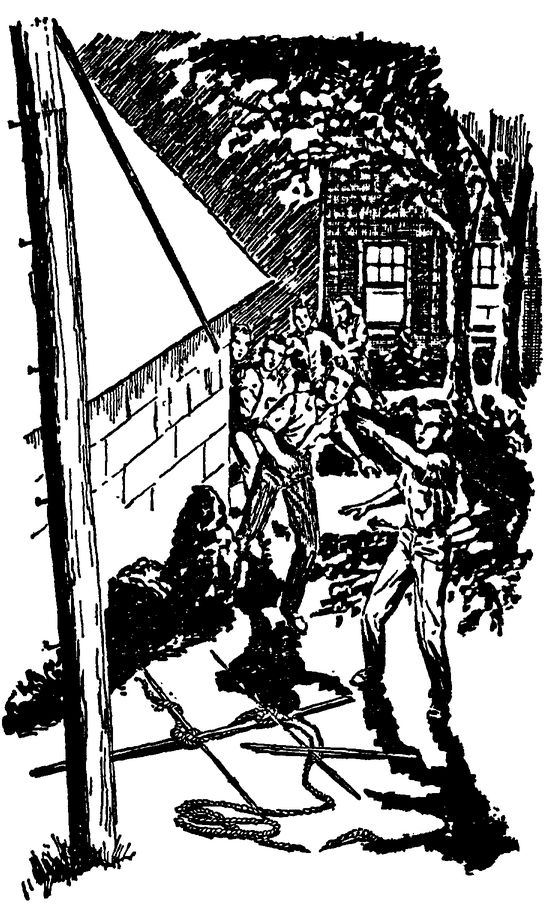 “Look!” cried Joe. “This was no accident.”
“Well, maybe,” the chief replied. “You would know better about that than I. Just the same, I'll be on the lookout for vandals.”
Excitedly speculating on the incident, the brothers and their pals were circling the house again, searching for clues, when they encountered a tall, angular woman coming briskly up the walk.
“Hello, Aunt Gertrude,” Frank and Joe greeted their father's sister, who made her home with them. “Have a good time?”
“Yes,” she replied. “Our Ladies Guild had an excellent rummage sale.”
She dug into her large handbag and brought out two belts with huge silver buckles. “I got these for you boys,” Aunt Gertrude told her nephews.
“Wow!” said Joe. “Some present!”
“Thanks, Auntie!” the brothers said together, and Frank added, “Look at those silver buckles! They must be worth a fortune!” He grinned appreciatively. Both Frank and Joe loved their aunt, despite the fact that at times her manner was somewhat peppery and her comments tart.
As Chet, Biff, and Tony crowded around to admire the belts, Aunt Gertrude noticed Chief Collig coming across the lawn with Fenton Hardy. The smile on her face changed to a worried frown.
“Another mystery?” she asked.
The boys explained about the antenna. To allay their aunt's fear, they emphasized the fact that Chief Collig thought it probably was just a prank.
Aunt Gertrude was not to be easily reassured.
“Prank, humph! It's a bad omen, more likely! I hope you'll be careful!”
“We'll watch our step!” said Frank, patting her shoulder.
All the boys returned to Mr. Hardy's second-floor study and continued talking of the evening's events. When the detective joined them a few minutes later, he looked serious.
“Time for me to give you the full story,” he said. “It will concern each of you.”
The boys' excitement mounted at Mr. Hardy's words.
“Sam Radley was broadcasting from Yellowknife, in the Canadian Northwest Territories,” Fenton Hardy explained, “but we can't communicate now until we get that aerial installed. Radley's investigating a series of thefts which have been taking place at hunting and fishing lodges in the Great Slave Lake area. Rifles, canoes, outboard motorsâand now even an airplaneâhave been stolen. The owner of the lodges has retained me to find the thieves. Since I was tied up on something else, he agreed to let my assistant work on it.” The detective paused, then continued, “Radley has been up there for some time andânow I think he needs help!”

Let the right one in by John Ajvide Lindqvist
Night of the Candles by Jennifer Blake
Confessions of a Hollywood Star by Dyan Sheldon
Mr Golightly's Holiday by Salley Vickers
Heart of a Tattooist: Dark Romance MC Club Alpha Bad Boy Obsession (Tattooist Series Book 3) by Lexy Timms
The Bride Wore Feathers by Sharon Ihle
Daylight on Iron Mountain by David Wingrove
Zombie Mage by Drake, Jonathan J.
Harriet Hume: A London Fantasy by Rebecca West
Killing a King: The Assassination of Yitzhak Rabin and the Remaking of Israel by Dan Ephron