Read The Wicked and the Just Online

The Wicked and the Just 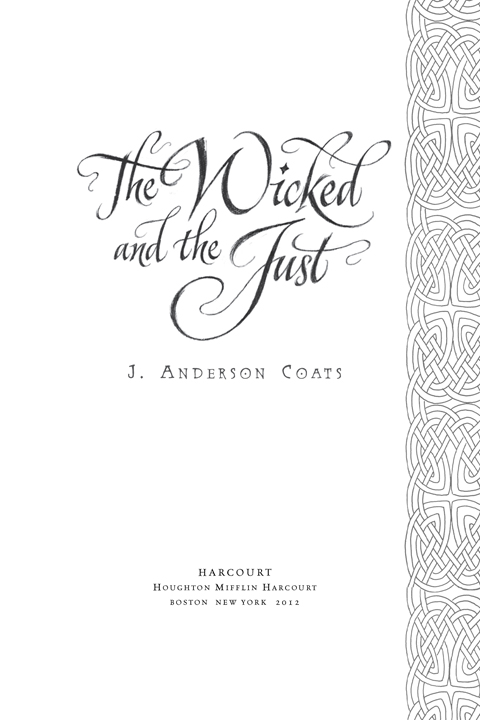 Harcourt is an imprint of Houghton Mifflin Harcourt Publishing Company.

Summary: In medieval Wales, follows Cecily whose family is lured by cheap land and the duty of all Englishman to help keep down the “vicious” Welshmen, and Gwenhwyfar, a Welsh girl who must wait hand and foot on her new English mistress.

To Michael and Owen 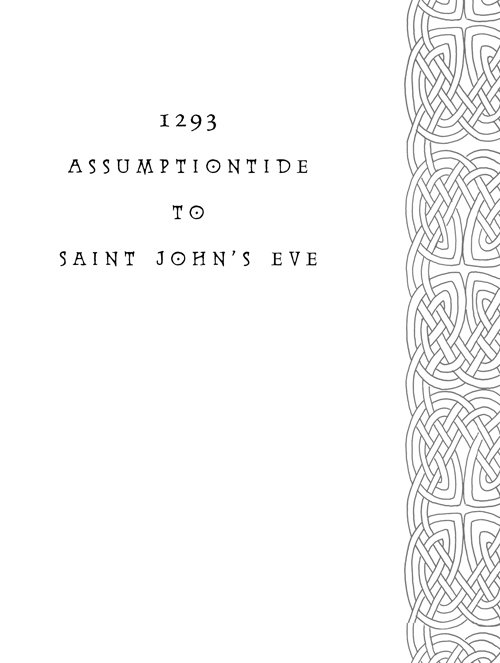 T
ONIGHT
at supper, over capon and relish, my father ruined my life.

He smiled big, scrubbed his lips with the end of his cloak, and said, “We're moving house.”

“Thank the Blessed Virgin!” I sat up straighter and smoothed my kirtle. “I'm weary to thimbles of Coventry. Will we be back at Edgeley Hall in time for the Maypole?”

“No, sweeting. We're not going back to Edgeley. We're moving to Caernarvon.”

I'm in my chamber now. I will never speak to him again.

Unless he buys me a new pelisson for the journey.

I'll not go to Caer-whatsit, not while there's breath in me.

I'll not eat. Not till my father gives up this foolish notion. At supper, I enter my uncle's hall with my nose in the air and sit at my father's right and sniff as the plates pass.

Betimes I glance at my father to see if he notices, but he's too busy loading his gob with sowce so grease-slick shiny it catches rushlight, and pies with crusts that dissolve at the touch.

I eat in silence. But everything tastes as bitter as wormwood.

So I refuse to speak to him. Not one sweet word from his beloved daughter, his only living child, the light of his otherwise meaningless life.

My father merely smiles and remarks to the saints, “My, how delightfully quiet it's become.”

I've no wish to resort to manipulating him, but it's rapidly becoming necessary to end this worrisome notion of moving with a slightly underhanded blow.

So I confront him in the public of the hall with my most piteous Salvo-eyes and wail, “How can you do this to me? I'll die an old maid! There won't be a suitable man for leagues out in the wilderness!”

“A pity you were not born a boy, sweeting,” my father replies. “What a King's Bench lawyer you would have made.”

And then he arranges for our household goods to be brought to Caer-whatsit by pack train.

An unwelcome feeling is coming over me. This might really be happening. And there might be naught to do for it.

Alice and Agnes pull me into the hearth corner, their eyes as big as trenchers. They want to know if it's true, if we're really leaving. I cannot speak, not even to Alice, who gave me her only ribbon to cheer me when Salvo went lame, nor to Agnes, who has held her tongue about how I kissed Wat the groom last May Eve.

Coventry was bad enough when we came here last Easter. Filthy and crowded, not a patch of green anywhere. Only for a while, my father promised, since already we were straining my uncle's hospitality. Only till we got Edgeley sorted.

Now this. Giving up his birthright to live among savages. Dragging me away from my two dearest friends and any chance at all of making a decent marriage. All with good cheer, no less! I'd think ruining a family would weigh heavier on a father's conscience.

My father may be going mad. Apparently I'm the only one who sees it.

Says my uncle William: “No service owed for your holding? Neither here nor overseas? Only twelvepence a year and that's all? Blast it, what fortune you have!”

Say my cousins: “Hey, Cesspool, how will you keep your precious undershifts clean now?” “Poor Cesspile, you'll have to give them up for want of lye!” “Cesspit, you'll tell us how the Welsh lads kiss, won't you?” “That's if you make it back alive, eh, Cesspile?”

Charming. You'd think that one being a squire and the other a journeyman goldsmith would make them too grown-up to mock my name. You'd be wrong.

My aunt Eleanor is the only one with something sensible to say: “Oh, Robert, how can you take a young woman into that den of vipers? Leave poor Cecily here with me.”

I seize my father's sleeve and beg, “Please, Papa, couldn't I stay?”

But my father only laughs, big like church bells. “I would miss you far too much, sweeting. Besides, it's perfectly safe. I wouldn't put you in danger for all of Christendom.”

One morning in April just after Easter, my father rents a cart and hires a man who smells of cabbage to drive it. Most of our belongings will follow us by pack train, but my father would bring the valuables with him. The pewter and a strongbox are hidden among some of our simplest goods, and those will keep us till the pack train arrives.

The cart fills up fast. Our things are stacked two and three bundles high. I direct two of the townsmen to load my coffer into the wagon. The coffer contains my most treasured possessions, so I know my father would want it with the valuables.

Salvo limps out of my uncle's townhouse. He stumbles over the doorframe and heaves his way to the cart, where he collapses against the wheel. I kneel and pet him, and he lifts his tail high enough for a single friendly whap.

Then I peer into the wagon crammed back to front.

This won't do, so I climb into the cart and shift the bundles and crates, but the stacks I make grow so high that the goods will end up in the mud at the first deep rut.

Salvo closes his eyes. His sides are still fluttering.

My father is arguing with the carter. As usual, it's up to me to make things right.

I catch one of the townsmen by the sleeve and tell him that my coffer should be removed from the wagon to the pile of goods being brought later. The space it leaves is just big enough for Salvo, and I bring his sackcloth bed from my uncle's hearth with my own hands.

My relations turn out to say farewell. My uncle William clasps wrists with my father and tugs cheerfully on my veil. My aunt Eleanor kisses us again and again, sobbing into her handkerchief. She leaves wet smears on my cheeks.

Alice and Agnes cling to my elbows and weep. My two friends are all that has kept my exile in Coventry bearable.

I embrace them both and whisper, “I'm coming back. I'll not be in that dreadful place forever.”

They weep harder. They don't believe me.

The wagon is loaded. All is ready. My father embraces my aunt and uncle once more while I hold on to Alice and Agnes as though Hell's great maw has opened beneath us.

Alice and Agnes and I lean together in a tight knot and pledge to be friends forever, no matter how far apart we are. Their shoulders are warm and wisps of their hair tickle my cheek and I'm choking out my promise because I'm going to wake up tomorrow and Alice's elbow won't be jammed in my ribs and Agnes won't be there to lend me a length of thread when mine goes missing in the dim.

As I climb into the wagon, Alice catches my sleeve. She presses a soft folded packet into my hands and whispers, “We want you to keep it. To remember us.”

I weep as Coventry rolls out of view. I am like the saints who were sent into the desert to be killed by infidels.

I run out of tears and rub my stinging eyes. The wagon jounces along a rutted track, hitting rocks and chuckholes. I have a blurry view of the carter's faded hood and the oxen's rumps, and Salvo is heavy on my feet.

There's something in my hands. The packet Alice gave me. I unwrap it and my throat closes up tight.

It took us a year, all three of us perched like dolls shoulder to shoulder, bent over one long frame. My fingers throb just looking at the two dozen saints lined up before the throne of God.

Alice was keeping this altar cloth we made to present to Saint Mary's in Coventry at Whitsuntide.

Instead she gave it to me.

As if I need an altar cloth for that.

When dusk is falling, we stop at an inn. Supper is a meat pasty with stale crust and some small beer in a wooden vessel. I'm so hungry that I eat the pasty in three bites without thinking too hard on what might be within.

Then I find a hair in my teeth.

I must share a pallet with two alewives. They both snore like pigs. The fleas devour me toe to crown.

Once we're stuck in Caer-whatsit, I will go to Mass as faithfully as an abbess and confess my sins every quarter-day. If Hell is anything like this journey, I want to be certain of my soul.

I'm restless all night, and I rise even ere dawn and watch the whey-pale daughter of the house blearily stir the fire to life. After she drags herself away, I wrap up tight in my cloak by the struggling fire and stare hard into the flames.

Right now it's lambing season at Edgeley, and I should be on the uplands watching the little darlings frisk and stagger. I should be admiring the clean cuts of the moldboard as the plowmen follow the oxen up and down the strips. I should be sowing my garden behind Edgeley's kitchen with rue and madder.

“How are you holding up, sweeting?” My father glides out of the darkness and nudges my foot cheerfully.

His good humor makes Edgeley seem even farther away.

My father kneels at my elbow and squints into the fire. “I'm trying to decide what answer to give you. The one I'd give a child who needs to hear everything is well, or the one I'd give a grown girl who can cope with a bit of the world's ill.”

“Oh, Papa, no! They found against your claim to Edgeley? How could they, when you ran it so well for so long?”

He shrugs sadly. “Simple. Roger is my elder brother. The manor goes to him. I must wish him well of it.”

“I wish he'd never come back.” I fold my arms. “I wish the infidels had
eaten
him.”

My father stiffens. “Watch your tongue, Cecily. Your uncle Roger is a Crusader who followed his Grace the king to liberate the Holy Land.”

“And when he comes back, he liberates
your
land,” I mutter.

“Sweeting, come here.” My father holds out his arms and I'm so tired and heartsore that I shift into his embrace as if I'm six again and scared of the bull. “I'm not happy about it, but such is the way of the world. In Caernarvon, I can get a burgage for twelvepence a year without any military service due, not foreign or domestic. It's all I can get if I'll not have the humiliation of being a steward on a manor I was once lord of.”