The Witch at Sparrow Creek: A Jim Falk Novel 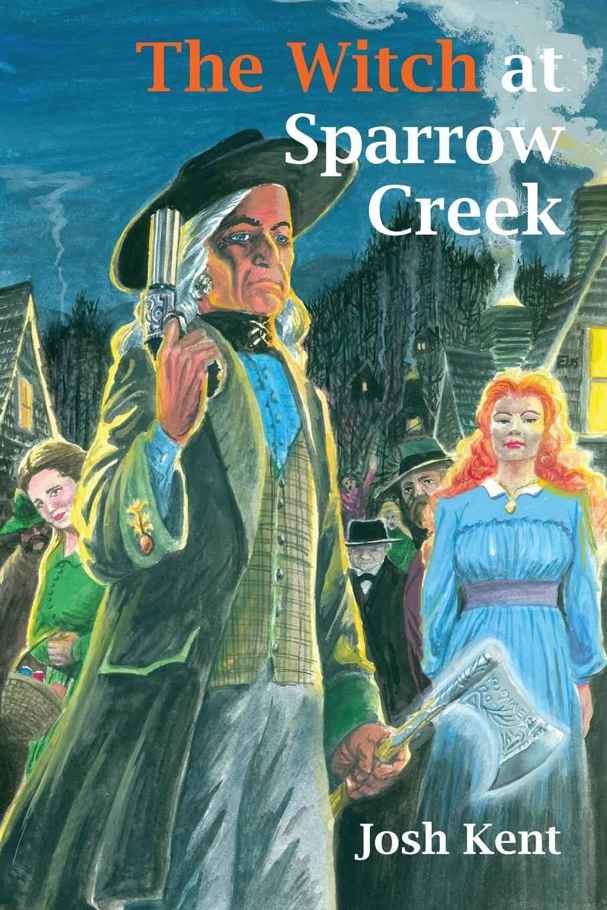 Franklyn Searight,
Lair of the Dreamer: A Cthulhu Mythos Omnibus
(2007)

Joseph Pulver,
Blood Will Have Its Season
(2009)

The Witch at Sparrow Creek: A Jim Falk Novel
copyright
© 2015 by Josh Kent.

This edition copyright © 2015 by Hippocampus Press.

No part of this work may be reproduced in any form or by any
means without the written permission of the publisher.

James walked along the path with his father. His father had
his hands on Jim’s shoulders, pushing him along. There was no moon that night,
and the woods around them were black. James couldn’t tell if his eyes were
opened or closed. The woods were so quiet. Their feet crunched along in the
snow. Sometimes, ahead, he thought he heard a laugh or a whisper from the trees.

Soon he could see a dim and dancing yellow glow—the small,
fluttering light of Old Magic Woman’s fire that he’d seen so many times before
of an evening. This night, at the sight of the glow, James’s stomach twisted
and his head filled with a stuffy heat.

Ithacus Falk felt his boy hesitate on the path in front
of them.

“James,” he said, “do not be afraid. You must do this
thing.” He pushed him along.

“Pa,” James whispered as the light of the fire grew orange
and spread through the snowy trees, “what happens?”

“No one can say, but you will soon see,” Ithacus said,
and a small smile came to his face in the dark.

“Yes, boy, the same, but it is not the same for everyone.
Now hush.”

James could see the fire reaching toward the dark branches
in the clearing ahead now. This fire was much, much larger than a normal
camping fire, and there was a special kind of shape around it made by logs. The
logs crossed one over the other, forming a crooked circle that went around into
the center of the bright fire. A tall shadow was standing there, the flames
curling and flowing behind it.

Jim stopped all of a sudden, and his father nearly pushed
the boy face first into the snowy path.

“James, you will, you will see, you must pass through
this.”

James didn’t understand any of this, but he didn’t know
what to say or how to say it. He only knew that he wanted to go back, back through
the forest, back up the mountain road, back through the field and into his warm
bed at home—yes, but that wouldn’t be far enough away. James wanted to go back
into the past. He wanted to go back before the witch, before his mother died,
to sit again on the woven rug in his parents’ home while his father stoked the
fire and his mother boiled water for coffee. He wanted to run so fast that no
one could see him anymore. If only there was a hole out there somewhere in the
moonless forest, a hole that he could dive down into and go through to the land
of the past, if only he could . . . Especially if it meant that he would never
again arrive at this place, this moment, this shadowy fire in the night.

He peeped open his eyes through his hands and squinted
at the blaze as his father moved him forward again. The figure standing by the
fire was not Old Magic Woman. The figure was too tall to be any person and had
long, crooked arms that reached from the shoulders nearly to the ground. The
flames showed that the figure’s face was like a mountain cat’s, but from either
side of the head came long, twisting antlers.

James felt a cold come into his chest.

“What is that, Pa?” James asked as the dizzy feeling
came over him again. Beside the figure he could see now were standing four old men,
Old Magic Woman’s people, the Katakayish people of the woods and rivers, those
people sometimes called the First People or the River People. Four Katakayish
men stood around the fire, each one in a shiny costume of leaves, beads,
feathers, fur, and jewels, each man’s beads and jewels shining out in a single
color of his own, black, yellow, blue, and red. They were all wrinkled with
graying hair, but they looked strong and fierce because the Katakayish people
were strong. It was also said, however, that they were passing away.

When they saw little James and his father approaching,
Black and Red got out their drums and Blue put a flute made of bones and sticks
to his old lips. The drums pattered and then started into heartbeats beating as
the flute twittered high and low, winding its way around and through.

When Eyabé came to the mountain

Set upon him to devour

When Eyabé came to the mountain

Set upon tear to pieces

Skin from blood and blood from
bone

Skin from blood and blood from bone . . .

James entered the circle around the fire with his father.
The drums pounded ever louder, ever faster. The four old men started to dance
with jagged, jerking motions, twirling and bending, following one another around
and around the fire in a right-handed circle while Yellow sang his song of
Eyabé and Kitaman.

The beast with the antlers and the cat’s face could only
be Kitaman! James remembered Kitaman from the stories Old Magic Woman had told
him and his father. Kitaman was the one who came at the end to take you by flame
into the dark world forever. Suddenly its arms moved and rose high with flaming
claws. Kitaman took two wide steps aside, and behind him was a kind of table
made of grasses and ropes and sticks. The table was in the same shape as the
base of the fire, the crooked circles inside of circles made from the ropes and
branches.

The creature set its flaming hands to the table, and
licks of red and yellow fire started spitting out from the sides and spilled up
into the trees.

James knew that the grass table was for him and that
he was going to the flames and that Kitaman would feast upon him.

James’s body felt stiff and he tried to scream, but only
a harsh whisper came out of his mouth.

Then he managed to wriggle out of his father’s grasp.
Ithacus raised his hands and then reached them both out to his son. He looked
at his son’s wide-open eyes as they looked about this way and that, first at
the dancing men, then at the fire, then at Kitaman, then at Ithacus. But little
James didn’t look his father in the eyes.

But little James looked at the fire and the big monster
and saw teeth and eyes glitter in the firelight and heard the old man voices
singing the terrible song.

“Skin from blood and blood from bone!”

His father reached out to grab him, but little James
was quick and he spun and ducked and left before his father could turn. Little James
Falk was wailing and tearing off down the path, disappearing from the light.

His father stood staring a long while as the men began
to notice the object of their ceremony was missing. Yellow stopped singing, and
then the drumming stopped. He looked at the others; Blue started to smile and
giggle. It wasn’t the first time he had seen a little boy run off into the
forest, afraid to become a man. But Yellow fiercely shushed him and waved his
arms and pointed to the boy’s father. Blue put his hand over his mouth, but his
eyes still smiled.

Ithacus looked down the path, waiting, waiting for his
son to return. The fires on the ends of the arms of the cat-beast dwindled, and
then the long arms folded and broke in the middle and dropped to the ground.
The beast collapsed in a slow way, and two human hands reached up and took away
the face and antlers, and Old Magic Woman stepped out of the shaman trappings
she wore and walked to Ithacus’s side.

She looked into the darkness with him for little James.
“Another day, maybe, another day.”

Ithacus looked at the ground, watching as the flames
made their shadows dance in the cold, black night.

Frankenstein: Dead and Alive by Dean Koontz
Brixton Rock by Alex Wheatle
Rhuddlan by Nancy Gebel
Love Lost and Found by Mildred Trent
Who Let the Dogs In? by Molly Ivins
A Matter of Trust by LazyDay Publishing
On The Fence (Uninhibited in Apple Trail, Arkansas) by Ford, Keri
Alfie Bloom and the Talisman Thief by Gabrielle Kent
Yankee Swap by Bonnie Bryant
The Lost Destroyer (Lost Starship Series Book 3) by Vaughn Heppner