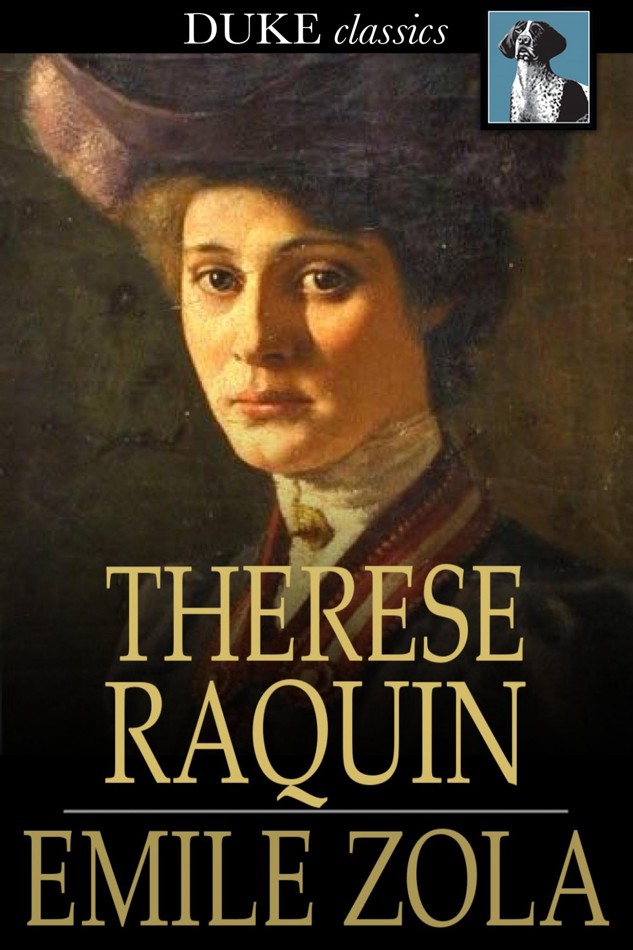 This volume, "Therese Raquin," was Zola's third book, but it was the
one that first gave him notoriety, and made him somebody, as the saying
goes.

While still a clerk at Hachette's at eight pounds a month, engaged in
checking and perusing advertisements and press notices, he had already
in 1864 published the first series of "Les Contes a Ninon"—a reprint of
short stories contributed to various publications; and, in the following
year, had brought out "La Confession de Claude." Both these books were
issued by Lacroix, a famous go-ahead publisher and bookseller in those
days, whose place of business stood at one of the corners of the
Rue Vivienne and the Boulevard Montmartre, and who, as Lacroix,
Verboeckhoven et Cie., ended in bankruptcy in the early seventies.

"La Confession de Claude" met with poor appreciation from the general
public, although it attracted the attention of the Public Prosecutor,
who sent down to Hachette's to make a few inquiries about the author,
but went no further. When, however, M. Barbey d'Aurevilly, in a critical
weekly paper called the "Nain Jaune," spitefully alluded to this rather
daring novel as "Hachette's little book," one of the members of the firm
sent for M. Zola, and addressed him thus:

"Look here, M. Zola, you are earning eight pounds a month with us, which
is ridiculous for a man of your talent. Why don't you go into literature
altogether? It will bring you wealth and glory."

Zola had no choice but to take this broad hint, and send in his
resignation, which was at once accepted. The Hachettes did not require
the services of writers of risky, or, for that matter, any other novels,
as clerks; and, besides, as Zola has told us himself, in an interview
with my old friend and employer,
[1]
the late M. Fernand Xau, Editor of
the Paris "Journal," they thought "La Confession de Claude" a trifle
stiff, and objected to their clerks writing books in time which they
considered theirs, as they paid for it.

Zola, cast, so to say, adrift, with "Les Contes a Ninon" and "La
Confession de Claude" as scant literary baggage, buckled to, and set
about "Les Mysteres de Marseille" and "Therese Raquin," while at the
same time contributing art criticisms to the "Evenement"—a series of
articles which raised such a storm that painters and sculptors were in
the habit of purchasing copies of the paper and tearing it up in the
faces of Zola and De Villemessant, the owner, whenever they chanced to
meet them. Nevertheless it was these articles that first drew attention
to Manet, who had hitherto been regarded as a painter of no account, and
many of whose pictures now hang in the Luxembourg Gallery.

"Therese Raquin" originally came out under the title of "A Love Story"
in a paper called the "Artiste," edited by that famous art critic and
courtier of the Second Empire, Arsene Houssaye, author of "Les Grandes
Dames," as well as of those charming volumes "Hommes et Femmes du 18eme
Siecle," and many other works.

Zola received no more than twenty-four pounds for the serial rights of
the novel, and he consented at the insistence of the Editor, who pointed
out to him that the periodical was read by the Empress Eugenie, to draw
his pen through certain passages, which were reinstated when the story
was published in volume form. I may say here that in this translation,
I have adopted the views of the late M. Arsene Houssaye; and, if I have
allowed the appalling description of the Paris Morgue to stand, it is,
first of all, because it constitutes a very important factor in the
story; and moreover, it is so graphic, so true to life, as I have seen
the place myself, times out of number, that notwithstanding its horror,
it really would be a loss to pass it over.

Well, "Therese Raquin" having appeared as "A Love Story" in the
"Artiste," was then published as a book, in 1867, by that same Lacroix
as had issued Zola's preceding efforts in novel writing. I was living
in Paris at the time, and I well recall the yell of disapprobation with
which the volume was received by the reviewers. Louis Ulbach, then
a writer on the "Figaro," to which Zola also contributed, and who
subsequently founded and edited a paper called "La Cloche," when
Zola, curiously enough, became one of his critics, made a particularly
virulent attack on the novel and its author. Henri de Villemessant, the
Editor, authorised Zola to reply to him, with the result that a vehement
discussion ensued in print between author and critic, and "Therese
Raquin" promptly went into a second edition, to which Zola appended a
preface.

I have not thought it necessary to translate this preface, which is
a long and rather tedious reply to the reviewers of the day. It will
suffice to say, briefly, that the author meets the strictures of his
critics by pointing out and insisting on the fact, that he has simply
sought to make an analytic study of temperament and not of character.

"I have selected persons," says he, "absolutely swayed by their nerves
and blood, deprived of free will, impelled in every action of life,
by the fatal lusts of the flesh. Therese and Laurent are human brutes,
nothing more. I have sought to follow these brutes, step by step, in the
secret labour of their passions, in the impulsion of their instincts,
in the cerebral disorder resulting from the excessive strain on their
nerves."

At the end of the Rue Guenegaud, coming from the quays, you find the
Arcade of the Pont Neuf, a sort of narrow, dark corridor running from
the Rue Mazarine to the Rue de Seine. This arcade, at the most, is
thirty paces long by two in breadth. It is paved with worn, loose,
yellowish tiles which are never free from acrid damp. The square panes
of glass forming the roof, are black with filth.

On fine days in the summer, when the streets are burning with heavy sun,
whitish light falls from the dirty glazing overhead to drag miserably
through the arcade. On nasty days in winter, on foggy mornings, the
glass throws nothing but darkness on the sticky tiles—unclean and
abominable gloom.

To the left are obscure, low, dumpy shops whence issue puffs of air as
cold as if coming from a cellar. Here are dealers in toys, cardboard
boxes, second-hand books. The articles displayed in their windows are
covered with dust, and owing to the prevailing darkness, can only be
perceived indistinctly. The shop fronts, formed of small panes of glass,
streak the goods with a peculiar greenish reflex. Beyond, behind
the display in the windows, the dim interiors resemble a number of
lugubrious cavities animated by fantastic forms.

To the right, along the whole length of the arcade, extends a wall
against which the shopkeepers opposite have stuck some small cupboards.
Objects without a name, goods forgotten for twenty years, are spread
out there on thin shelves painted a horrible brown colour. A dealer in
imitation jewelry, has set up shop in one of these cupboards, and there
sells fifteen sous rings, delicately set out on a cushion of blue velvet
at the bottom of a mahogany box.

Above the glazed cupboards, ascends the roughly plastered black wall,
looking as if covered with leprosy, and all seamed with defacements.

The Arcade of the Pont Neuf is not a place for a stroll. You take it to
make a short cut, to gain a few minutes. It is traversed by busy
people whose sole aim is to go quick and straight before them. You see
apprentices there in their working-aprons, work-girls taking home their
work, persons of both sexes with parcels under their arms. There are
also old men who drag themselves forward in the sad gloaming that falls
from the glazed roof, and bands of small children who come to the arcade
on leaving school, to make a noise by stamping their feet on the tiles
as they run along. Throughout the day a sharp hurried ring of footsteps,
resounds on the stone with irritating irregularity. Nobody speaks,
nobody stays there, all hurry about their business with bent heads,
stepping out rapidly, without taking a single glance at the shops. The
tradesmen observe with an air of alarm, the passers-by who by a miracle
stop before their windows.

The arcade is lit at night by three gas burners, enclosed in heavy
square lanterns. These jets of gas, hanging from the glazed roof whereon
they cast spots of fawn-coloured light, shed around them circles of pale
glimmer that seem at moments to disappear. The arcade now assumes the
aspect of a regular cut-throat alley. Great shadows stretch along the
tiles, damp puffs of air enter from the street. Anyone might take the
place for a subterranean gallery indistinctly lit-up by three funeral
lamps. The tradespeople for all light are contented with the faint rays
which the gas burners throw upon their windows. Inside their shops, they
merely have a lamp with a shade, which they place at the corner of their
counter, and the passer-by can then distinguish what the depths of these
holes sheltering night in the daytime, contain. On this blackish line
of shop fronts, the windows of a cardboard-box maker are flaming: two
schist-lamps pierce the shadow with a couple of yellow flames. And, on
the other side of the arcade a candle, stuck in the middle of an argand
lamp glass, casts glistening stars into the box of imitation jewelry.
The dealer is dozing in her cupboard, with her hands hidden under her
shawl.

A few years back, opposite this dealer, stood a shop whose bottle-green
woodwork excreted damp by all its cracks. On the signboard, made of a
long narrow plank, figured, in black letters the word: MERCERY. And on
one of the panes of glass in the door was written, in red, the name of
a woman:
Therese Raquin
. To right and left were deep show cases, lined
with blue paper.

During the daytime the eye could only distinguish the display of goods,
in a soft, obscured light.

On one side were a few linen articles: crimped tulle caps at two and
three francs apiece, muslin sleeves and collars: then undervests,
stockings, socks, braces. Each article had grown yellow and crumpled,
and hung lamentably suspended from a wire hook. The window, from top to
bottom, was filled in this manner with whitish bits of clothing, which
took a lugubrious aspect in the transparent obscurity. The new caps, of
brighter whiteness, formed hollow spots on the blue paper covering the
shelves. And the coloured socks hanging on an iron rod, contributed
sombre notes to the livid and vague effacement of the muslin.