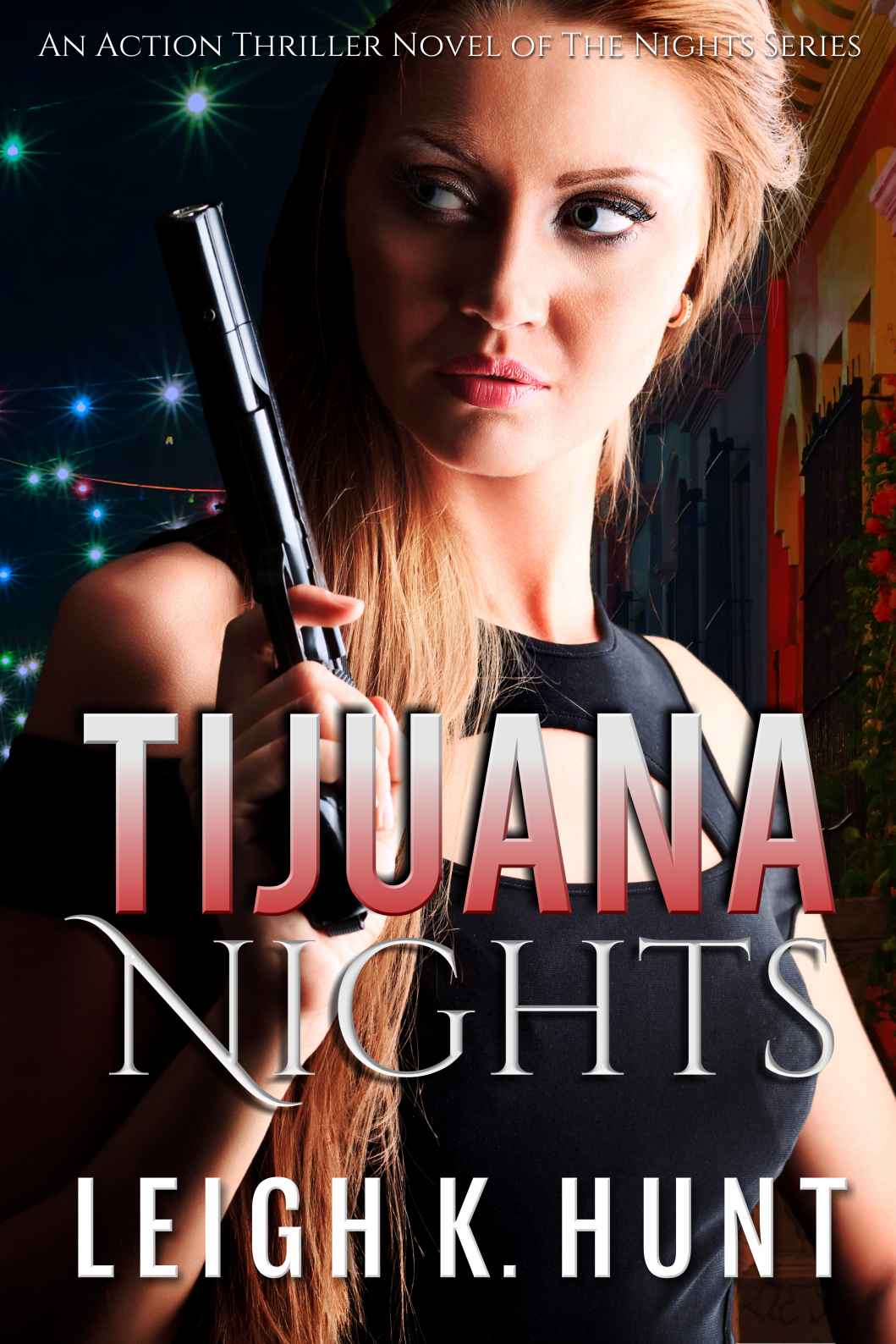 No part of this book may be reproduced, scanned, or distributed in any printed or electronic form without permission. Please do not participate in or encourage piracy of copyrighted materials in violation of the author's rights. Purchase only authorized editions.

The is a work of fiction. Names, places, businesses, characters and incident are either the product of the author's imagination or are used in a fictitious manner. Any resemblance to actual persons, living or dead, actual events or locales is purely coincidental.

Tijuana Nights, Book I of the Nights Series by Leigh K. Hunt

Find out more about Leigh K. Hunt at

This eBook is licensed for your personal enjoyment only. This eBook may not be re-sold or given away to other people. If you would like to share this book with another person, please purchase an additional copy for each person. If you are reading this book and did not purchase it, or it was not purchased for your use only, then please return to Amazon.com and purchase your own copy. Thank you for respecting the hard work of this author.

This book is dedicated to my husband, Michael.

You are my rock, and more often than not (or that I would like to admit) – my voice of reason.

Thank you for always listening and being there, even if I do cause you a few eye rolls. X

I kicked my high heels off under the courtyard table at the Little Havana bar in Tijuana, and sparked up a Marlboro Light, savouring the inhalation of the smoke. I kept telling myself I was going to give up, but it’s really not the time. Especially not today. Adrenaline still coursed through me, and my hands shook as I lifted the margarita to my lips and took a sip. I swore as I spilled a few drops. I had to contain myself and calm the fuck down.

But who could calm down when they have just seen their plane blown to dust? I should, in reality, have been on my way to Los Angeles, before catching a connecting flight home to London. But I missed my flight, and then when I got to the airport, I stood by and watched the plane explode into a million pieces just after take-off.

And somehow, deep down... I knew that explosion was meant for me.

Tijuana was hot, and dusty, and I'd thoroughly had enough. I wanted to go home to England, sort out a few things, and settle back into my life as a historian, writing historical reports, and losing myself in the labyrinth of archives around Europe. The last place I wanted to be was stuck in Tijuana, in designer clothes, knowing that I'm up to my neck in shit. I stubbed my cigarette out, and had another sip of margarita, savouring every moment of the taste, in an effort to centre myself. I knew that I had to call River and ask for his help.

I rummaged through my handbag, pulling things out and dumping them on the table as I tried to find the business card with River's numbers on it. In the process I grasped my iPhone, my finger traced the bullet hole through the middle as I drew it from my bag and slowly exhaled.

My iPhone was the last luxurious thing I had got myself. I had bought it the day that I found Luke screwing my best friend in our bed and I threw him out.  I never would have spent that sort of money if I’d known he was going to demand half of everything I owned. I bit my lip as I turned it over in my hand. Many people consider phones to be their 'life-savers'... but usually that's just a figure of speech. No one actually believes their phone will literally save their life. But I do - I'm living proof. The bullet that killed my phone made me move; if I hadn't, the next bullet would have been in my head.

I found River's card and stood, leaving my shoes under the table as I walked barefoot into the dim bar.

After a frustrated look of confusion, the barman finally pointed the phone out to me. Looking down at the card in my hand I read the words – Mergers and Acquisitions. I grimaced. More like Murders and Executions. I picked up the phone, and dialled River's mobile number. After two rings he picked up.

"It's me," I said quietly, watching the barman across the room as he polished glasses. There were no other patrons apart from me. Not surprising really considering it was still morning.

"You're alive." River’s voice echoed with relief down the phone. "Where the hell are you?"

"I'll be there shortly."

He hung up on me, and I looked at the phone in disbelief. It's not the first time he'd done it, but I thought he would at least be a bit more polite. Particularly considering he’s British. Rolling my eyes, I hung the receiver up, and on my way back to my table, stopped by the bar and ordered another drink. I knew I wouldn’t be able to drive legally after this, but who gave a shit about legalities in Mexico?

Twenty minutes later, I spotted River making his way through the dark bar, and out into the courtyard. As always, my heart raced when I saw him. From what I had gathered, River used to work for the British MI6 or some other covert organisation. He was trained as an assassin by a professional government outfit of some kind. If truth be known, I didn’t really want to know the exact details.

I couldn’t tell what nationality he was, as he looked like he was of mixed descent. He was from England – that I could tell from his middle-upper class accent – and almost African looking, but then he could have been Mediterranean, or maybe even Middle Eastern. River’s colouring allowed him to fit in perfectly in places like Tijuana. He always maintained a professional composure, always dressed immaculately. Today, he was in a white shirt, casually open at the collar, and wore designer jeans despite the heat. I couldn't read his caramel-coloured eyes as they were hidden behind the aviator sunglasses that he always wore. Automatically I reached for the last of my margarita.

River sat down at my table, and smiled across at me. "I've spent the last hour wondering where the hell you were. Gabe hacked the passenger manifesto, and we discovered that you never boarded Flight 474 to LA." He picked up my iPhone, and put his little finger through the hole. "Looks like you caught a lucky break, Mack. Very lucky." He put the phone down, removed his glasses, and lifted his gaze to mine. “What happened?”

I drew in a deep lungful of air as the explosion of the plane replayed in my mind. I didn’t know where to start. I ran my hands through my hair nervously. A part of me didn’t want to breathe a word of what had happened in this godforsaken city. Another part knew that he needed to know.

“Yeah. Okay. Well, I woke up late this morning, God knows why; maybe because my phone was shot to shit and my alarm doesn’t work anymore. Anyway, I hadn’t finished packing properly, so I kind of just threw a few things together, and arranged for the hotel to send the rest of my gear back home.” I looked up at River, and saw that he was shaking his head in disapproval. “What?”

He smiled. “Rule number one. Never trust anybody – especially if they can be paid off for information.”

I wanted to tell him he could go fuck his rules, but thought better of it. It was not the time to pick a fight with an assassin. Instead, I frowned at him and shrugged. “Yeah, whatever. Anyway,” I continued. “Then my useless piece-of-shit car took ages to start, and when the engine finally ticked over and I hit the road, there was an accident, and I got stuck in traffic.  Seriously, I tried to make that flight, I really did. I even took back roads through this shithole to try and get to the airport faster.” I lit another cigarette, and slowly blew the smoke out into the sun-drenched courtyard. “The check-in lady informed me that I, “Rachel White”, had missed the flight, but that I was more than welcome to watch it take off.”

So I had. And I watched it explode mid-air. A huge white burst of light engulfed it, and I saw it before I heard or felt it. There were a hundred and fifty odd people on that plane, and I was meant to be one of them.

River reached across the table and grabbed my free hand. His fingers felt warm and steady against my clammy, shaky ones. “You need to settle down. I know you should have been on that plane. Now, Gabe has been checking the manifesto, and you’re right. No one else on that flight, that we can tell, had any affiliation with the cartel, or even anything else remotely shady.” He slowly smiled. “You are in good company, Mack. We’ll protect you. We got you into this mess… we can help you get out of it.”

The barman walked out of the bar, laden with two more drinks. I was really not going to be able to drive. I looked down at the Tag Hauer watch that River and Chase had given me, and noted that it wasn’t even mid-morning. If my mother was still alive she would be kicking my backside to Timbuktu and back again for drinking before five o’clock.

“So, let me guess. You know who blew up my plane?”

River leaned back in his seat and laughed. “I like you, Mack. You’re direct and to the point. It’s damn refreshing. To answer your question, yes. We have our suspicions that the destroy order on the plane may have come from Carmen Amaro.”