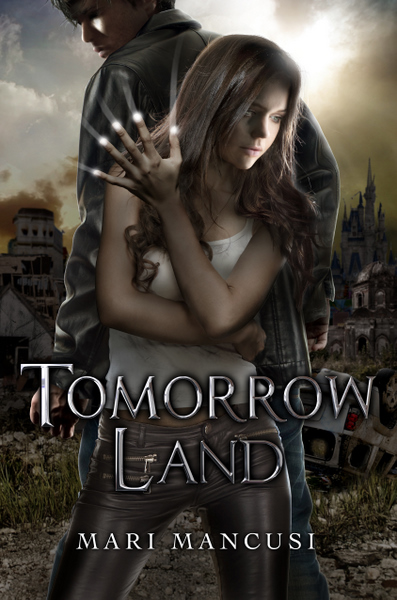 Writers struggle to support themselves. Please help them by buying their books from legitimate sources. The scanning, uploading and distribution of this book via the internet or any other means without the permission of the publisher is illegal and punishable by law. Please purchase only authorized electronic editions, and do not participate in or encourage electronic piracy of copyrighted materials. Your support of the author’s rights is appreciated.

“A high-stakes, high-octane tour through a devastating and deftly imagined future. This is Mancusi at the top of her game.”

—Diana Peterfreund, author of For Darkness Shows the Stars

“An apocalyptic coming of age futuristic romance that does the horror film genre proud.”

“There is action, there is love and there are zombies. What more can you ask for?”

“Marianne Mancusi has returned with an edgy all-new tale, filled with fast-paced action and a heroine strong enough to mold her own destiny.”

“I wouldn’t go out with Chris Parker if he were the last guy on Earth!”

Fifteen-year-old Peyton Anderson tossed her pink-streaked blond hair over her shoulder, then smoothed the pleats of her navy blue cheerleading skirt as she watched the gawky sophomore attempt to dribble the basketball down the court. He turned and caught her looking and threw her a goofy grin. She rolled her eyes and looked away.

“How many times has he asked you out now?” Avery, Peyton’s best friend, asked. The slim, athletic brunette turned and stretched against the bleachers, tugging at her own matching skirt. When the holographic scoreboard above them blinked—someone from the opposite team had stolen the ball from Chris and scored—she effortlessly launched into a triple backflip, ending with a twist, then cheered their team on. “Six?” she asked after she was done.

“Try sixteen. Maybe sixty, if you count first grade when he first moved down the street and started stalking me.”

“Stalking you, huh? Isn’t that overstating things a bit?”

“I wish. What do you think he’s doing in here, playing
Basketball Dayz
of all sims? I mean, look at him. Does he
look
like a sports sim type?” She gestured to the tall, skinny beanpole stumbling down the court. “Even his avatar is geeky looking.” She made a face.

“Face it, if it wasn’t for me, he’d be knee-deep in zombie blood right about now, rolling that whole
Knights of the Living Dead
VR that all the tech-heads are obsessed with,” Peyton said, feeling him staring at her again. “Geez. I should have signed in with my alt. Then, at least, he wouldn’t have recognized me.”

“Swapping sims just for you? You gotta admit, that’s some dedication,” Avery declared. “He’s like your Jacob!” The two girls had been on an early 2000s movie kick lately, streaming films their parents had grown up with: old fashioned, 2D stuff that didn’t even require VR goggles to watch.
The Twilight Saga
was one of their favorites. The silly fashions alone were worth hours of cracking up. And they loved imitating the slang.

“Well, then, where’s my Edward?” Peyton moaned, plopping down on the bleachers and staring up at the ceiling. “I at least deserve an Edward if I’m stuck on Team Jacob.”

Of course Avery would say that. She was dating his twin brother Todd and had set Peyton and Drew up to begin with. And in some ways, Peyton saw her point. Popular, hot, and ridiculously rich, Drew was the envy of every guy at school and the desire of every girl. He’d done wonders for her social status, too. No one saw her as the weird girl with the even weirder father when she was hanging on Drew’s arm.

Still, it wasn’t an exactly a ‘Twilight-esque love affair and Drew w s ano brooding, romantic hero. The guy loved exactly two things: sports and his reflection in the mirror. In fact, at age seventeen he’d already undergone three plastic surgeries, while most guys his age only got the one. And while sure, the procedures had perfected his physique, no operation in the world could boost a person’s brain cells.

It was maddening sometimes. Whenever Peyton tried to talk to Drew about things that were bothering her—real things like the current economy, the ongoing famine, the seemingly neverending war—he refused to listen, laughing her off and changing the subject back to sports or himself. She shouldn’t worry about the rest, he told her. The government would take care of it all. They always did.

She sighed. And maybe he was right. Maybe she’d been listening to her dad too much.

Out of the corner of her eye she caught Chris waving to her from across the court, then tripping over his own feet and tumbling to the ground. The opposing team’s virtual audience went wild as they scored yet again. Peyton groaned.

“I’m exiting,” she declared. “I’m jinxing the entire team just by being in here with him.” She blinked her eyes twice.

The signal to exit removed her smoothly from the sim and a moment later the gym disappeared, leaving her back in Avery’s basement. Peyton pulled off her VR goggles and leaned over to switch off her deck plug-in. She watched her friend do the same a moment later in the armchair across from her.

“I gained a level with that last flip,” Avery announced, bouncing excitedly in her seat. “Unlocked the NCAA courts!”

Her friend looked a bit embarrassed. “Yeah, well, you’d be just as high if you had your own copy and didn’t always have to play at my house. I get a lot of late-night practice once my parents go to bed. That’s when the real action on the court happens anyway.” She winked.

Peyton sighed. “Yeah, well, that’ll never happen. Not as long as I live at home anyway.”

“You know,” Avery said, “the fact that you don’t own your own sim deck in this day and age is almost criminal. Someone should report your dad for child abuse, denying his kid virtual reality.”

Peyton shrugged. Never mind the sim deck—the virtual reality videogame system that practically every kid had gotten from his parents by the age of three. At her house they didn’t even have a Smart TV. There was just a small, dusty, thirteen-inch black-and-white television sitting on a stand in one corner of their living room. The kind of TV they’d made last century, when television was first invented. It was almost as bad as having no TV at all. It got thirteen stations from bent rabbit-ears antennae her dad had jerry-rigged from a coat hanger. And none of the thirteen ever had anything on worth watching, just crackpot broadcasts by old technology enthusiasts and a mind-numbingly awful reality rerun about some obscure, ancient family known as the Kardashians.

When she was younger, she’d begged her dad for a Smart TV like all her friends had hanging in their living rooms. The ones where you could inject yourself into the show and become a character, changing the plot at will. But her dad refused, insisting that those kinds of television sets were dangerous. After all, there was no way to tell what programs the government had put inside of them, what the interactive devices were doing to your brain. Weren’t the higher-ups involved enough in their lives? he would ask her. Peyton supposed he was right.

“I’ve got to kick you out,” Avery said apologetically. “Gotta hit the doctor’s office this afternoon. I’m… I’m getting my LTF! Can you believe my parents finally said yes? How rolling is that?”

An LTF. A License to—well, you know. It wasn’t its official name, of course, but that’s what all the kids—and, Peyton knew, quite a few adults—called the Copulation Conditional. Kind of a stupid name, but what did the government expect when they started legislating who could have sex and requiring a license to do so?

“Oh wow. Stellar,” Peyton managed to say, trying to make her voice sound enthusiastic. Great. Even Erin now. Seriously, she was going to be the last one left on the planet without the shot.

The AIDS vaccine had been the biggest scientific breakthrough of the 21st century, if not the most controversial, especially after the United Nations had exerted their newfound global legislative powers and made it mandatory for everyone in their majority. It made sense. Africa had been decimated by the disease’s resurgence in the early twenties. The virus had mutated, rendering the formerly effective drug cocktails useless. And now, from the richest Upper East Sider in New York to the poorest bushman in Australia, everyone over eighteen was required to be vaccinated.

The vaccine was available to those younger than eighteen as well; teens like Erin. But because of certain complications with children in early tests—as well as moral objections across the more religious sectors—it eventually had been left up to the parents to decide about inoculating their families. And Peyton’s dad had said “no way” without even offering a reason why.

Trials of Artemis by London, Sue
Maigret and the Spinster by Georges Simenon
Woman On The Edge Of Time by Piercy, Marge
Resisting the Highlander: A Scottish Romance by Marian McBride
Courage and Comfort by Berengaria Brown
One Amazing Thing by Chitra Banerjee Divakaruni
Sweet Release (A Bad Boy Mafia Romance) by Victoria Villeneuve
southern ghost hunters 01 - southern spirits by fox, angie
The Riddle of the Red Purse by Patricia Reilly Giff
Make Her Pay by Roxanne St. Claire