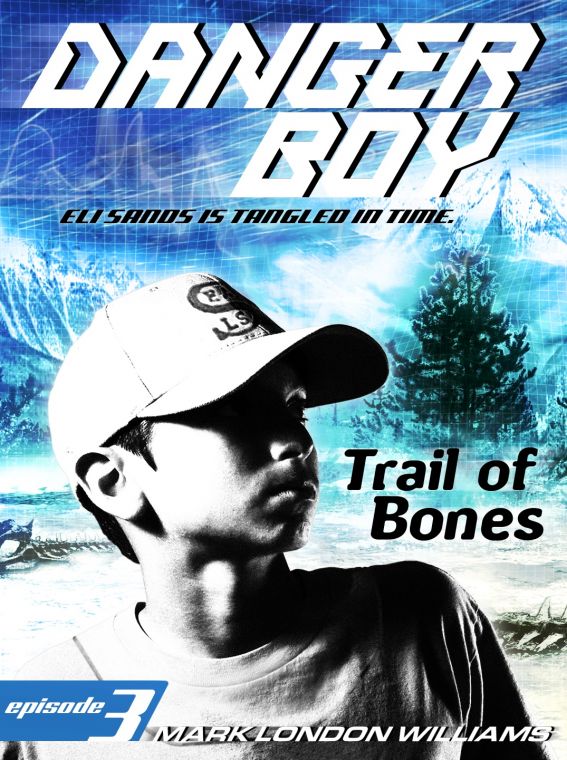 This one’s for Becky and Caitlin,

the earliest members of my own

They shake the boy, call his name.
“
Eli!
Eli!” They can’t tell yet if he’s still alive.

The boy is poked, and prodded. When his eyes open a
little, there’s a surge of relief. The boy was dreaming of lying in
a sunny field, of waking to warmth and friendship. If the search
party hadn’t come along, perhaps he’d keep dreaming forever, lying
in the field of snow, where his rescuers found him.

The search party is made up of explorers, U.S. Army
captains, a shaman from a local Indian tribe — journeyers of every
sort. Including a young Indian woman — not really all that much
older than the boy — named Sacagawea.

Sacagawea is married to a fur trapper, and has
wandered around the plains and mountains a lot, and she’s pretty
sure her wandering days aren’t over yet. She’s been across plains,
and over mountains, and has always come through okay.

She considers herself pretty lucky.

She wonders if this young man considers himself
pretty lucky. He must. What else would he be doing out here by
himself?

She knows the reasons they gave at the fort, when
they were heading out to look for him: That he’d headed out for the
Spirit Mound — a hill that was supposed to be haunted not only by
spirits and phantoms, but lately, by a lizard who walked upright
like a man. And even talked.

Those were the whispered stories.

And the boy was trying to get there, alone, on foot,
the whispers went, to reach the lizard man. It was said they had
some kind of connection.

Sacagawea feels a small, growing connection to this
young man, this Eli, since she was the first to find him.

She was good at reading signs, good at picking up
trails. When she heard there was a search party heading out, she
insisted on being part of it. Her husband, the fur trapper, always
more cautious than she, tried to forbid her from going. She was,
after all, thick with child, ready to give birth very soon. And for
a lot of men in her place and time, a pregnant woman wasn’t good
luck at all — just the opposite.

But her fur trapper husband also knew she was a
better tracker than he was, so when word came that the boy had left
on his own, with another snow storm coming, and she insisted on
going, the forbiddance only lasted a few minutes.

He was worried about the baby, but then again, how
long would she really be gone? How far could the boy have
gotten?

Pretty far, as it turned out.

He’d put together a direction from the Spirit Mound
stories — many from the same young shaman who now helped look for
him — and struck out to see his friend. For his part, the fur
trapper agreed with most of the exploring party that stories about
the walking, talking lizard man were nonsense. How could such a
creature exist?

But Sacagawea kept an open mind.

She’d seen the boy around the fort, overheard his
conversations a lot, and liked him. He seemed to be like she was,
an outsider, a person from somewhere else, who found himself on a
journey not of his own making, but who was a good traveler,
anyway.

“
Wake up,” she said in her own tongue, to the
near-frozen boy, as everyone stood around, watching his eyelids
flutter, and his unfocused eyes trying to make sense of where he
was. “Come back to us.”

Instead, the boy closed his eyes again, and dreamt
of the sunny field.

Perhaps the same sunny field where President
Jefferson and the others found him, last spring.

“
We found you now,” the Indian woman tells the
boy. “You can come back to this world. You will be all
right.”

“
Sacagawea?” The others stand around her, near
where she found the boy, nestled by the crook of a storm-shattered
tree. “Is he all right?”

It’s the one named Lewis, who’s asking her. His
partner, Clark, the co-leader of the explorers, stayed behind at
the fort. Lewis shakes Eli a little, and gets a smile, but it’s a
bit of a vacant smile, and the boy still doesn’t quite wake up.

Sacagawea knows what it’s like to be in one place,
and dream of another.

She dreams of her own home, with her tribe the
Shoshones. Dreams of the time before she was kidnapped as a girl,
then sold to other tribes, or, in the case of her husband,
Charbonneau, other men.

Lately, she’s had this strong feeling that she might
be seeing her home again, for the first time in years.

Perhaps all the boy really wanted was to go
home.

Her hand closed around the stone she wore next to
her skin — the one that her brother, the chief’s son, had given her
the day she was taken. A stone that was supposed to passed along
from chief to chief, a talisman she now wore for luck, and
protection.

“
Come on, Eli!” Another man from the fort. Named
Gass.

“
Stay. Here.” And North Wind Comes, the
shaman-to-be from the Mandan people, neighbors of the very Hidatsas
who sold her to Charbonneau. When you’ve been captured and sold,
you know a little about the world. The stone — the jagged crystal —
has warmed her, kept her steady through all the twists and turns.
Sacagawea reaches for it now, under the folds of the skins and furs
she wears.

She clasps it, then lifts the leather strap from
around her neck.

Then she presses the stone into the boy’s hands. His
fingers are really cold, almost too cold to move, but she gets them
to shut around the stone, too, and puts her own hands around
his.

“
Sacagawea, we need to get him back.” It’s
Charbonneau, talking to her in that slightly alarmed way he has
around her, especially when she’s following her own
decisions.

“
Wait,” she says, to all of them, again speaking
in the Shoshone she hasn’t used in far too long.

For a moment, it seems the boy might fall asleep
again, and Sacagawea knows that would be bad, to let him return to
slumber in the cold like this. Even dreaming of sunny fields
wouldn’t help.

But this time his eyelids stay open and the eyes
beneath them glisten, and come into focus at last.

“
Th-th-thank you,” he says at last, through
chattering teeth, the warmth coming now not from his dreams, but
from the rock in his hand.

Sacagawea gives him a little smile, then nods.

The boy will be all right.

She feels a little kick inside her stomach.

There are other journeys yet to come. For all of
them.

“Well, he’s certainly not a giant.”

“What shall we do with him, Mr.
Jefferson?”

All this talking. It makes my head hurt.
It’s like the time I fell asleep on the couch at my parents’ house
during a party, and I still remember hearing the phrase
brain
universe
as I was being picked up off the sofa and put to
bed.

I was five and I thought of colossal-sized
brains until the time I found out it was spelled “brane,” and meant
something else entirely, about the way the whole universe —and
maybe the universes around it, or next to it — are designed.

The design of my own universe used to be
better: There was no jarring time travel, no vanished parents, no
talking dinosaurs to explain.

Well, wait. Not that I want the dinosaur to
go away.

It feels sunny and bright above me…hot. And
cold and damp underneath me.

I’m sweating and I’m rolling around in mud
and my own “brain universe”— the one in my head— is aching. I think
I’m sick.

But everyone around me is still talking.

“I am not ‘Mr. Jefferson,’ while I am on
this trip, Mr. Howard. I am not ‘Mr. President.’ I am not in
charge, and I am not even officially here. Captain Lewis and
Captain Clark are in command. I am merely an interested citizen,
here to pursue a little science, and to wish them well.”

I’d better open my eyes and find out who’s
sounding like some kind of English teacher.

Not English teachers, as it turns out.
Cowboys.

Or maybe not cowboys, exactly. Daniel Boone…
sorts of guys. In scuffed buckskins and leather jackets and raccoon
caps and floppy wide hats that look almost like sombreros.

Along with a few other guys in soldier
clothes that look like they came from a production of
The
Nutcracker
, dressed in long blue coats and boots, bearing guns
with pointy bayonets.

One of those guys is taller than the others.
He’s not quite dressed like a soldier — but he still looks like
something from an old painting. With pants that don’t go all the
way down and stockings and shoes with big buckles. He has a
notebook, instead of a gun, and red hair pulled back in a little
ponytail. Hair like one of the hippies I’ve seen in the history
books.

I’d look around, but my “brain universe”
—and all the other parts of my head — feel like they weigh a
ton.

I turn my neck a little and can see some
horses and knapsacks and wooden wagons and long rifles in saddle
holsters or dangling from the arms of some of the men.

I hope they made it out of the Fifth
Dimension. I hope they’re okay.

I can hear a river nearby. I guess that
explains the mud.

“Mr. Floyd! Have your men tend to the
keelboat and mind how they load the crates! We can’t afford to lose
any provisions before we’ve even begun!”

Whoever’s speaking now has dark hair and
dark eyes that you can’t see all the way into.

All these boats and provisions and guns.
Maybe it’s some kind of war party, or patrol. Or expedition.

I try to sit up again, to say something. But
my mouth feels like some of the sun and the mud are at war in
there, too. Only a gurgling sound comes out.

“Aye-aye, Cap’n Lewis, I’ll go down and give
them what for.” It’s one of the cowboy-looking men, in smelly
leather, with a stubbly beard and a kind of Civil War costume hat.
He leans in and touches my forehead. “The boy seems awful hot.”

The man takes a canteen, a leather canteen,
from around his shoulder, and pours a few drops of water on my
face.

I realize how thirsty I am.

I try to ask for more, but suddenly, I
realize what this feeling is: it’s like the moment you come out of
a dream, but aren’t fully awake, and some part of you knows you’re
not sleeping anymore, but your body isn’t ready to start taking any
orders yet, either.

Though I wonder, since I travel through time
with a talking dinosaur and a girl who’s well over a thousand years
old, if I’m even in the coming-out-of-a-dream stage at all.

“Let me see him.” A taller man with no hat,
leans over the stubble-beard guy, and stares right at me, then
opens my eye real wide with his finger and thumb.