Transitional Justice and Peacebuilding on the Ground: Victims and Ex-Combatants (Law, Conflict and International Relations) 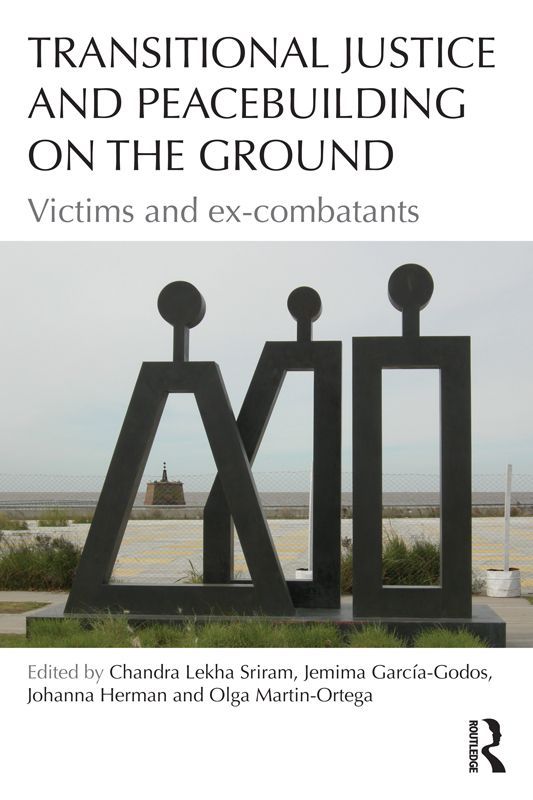 Transitional Justice and
Peacebuilding on the Ground

This book seeks to refine our understanding of transitional justice and peacebuilding, and long-term security and reintegration challenges after violent conflicts.

As recent events following political change during the so-called “Arab Spring” demonstrate, demands for accountability often follow or attend conflict and political transition. While traditionally much literature and many practitioners highlighted tensions between peacebuilding and justice, recent research and practice demonstrate a turn away from the supposed “peace vs justice” dilemma.

This volume examines the complex relationship between peacebuilding and transitional justice through the lenses of the increased emphasis on victim-centered approaches to justice and the widespread practices of disarmament, demobilization, and reintegration (DDR) of ex-combatants. While recent volumes have sought to address either DDR or victim-centered approaches to justice, none has sought to make connections between the two, much less to place them in the larger context of the increasing linkages between transitional justice and peacebuilding.

This book will be of great interest to students of transitional justice, peacebuilding, human rights, war and conflict studies, security studies, and IR.

Chandra Lekha Sriram
is Professor in Law at the School of African and Oriental Studies (SOAS), University of London, UK.

The effectiveness of global landmine regimes

Transitional Justice and Peacebuilding on the Ground

Transitional Justice and Peacebuilding on the Ground

Simultaneously published in the USA and Canada

Routledge is an imprint of the Taylor & Francis Group, an informa business

The right of the editors to be identified as the authors of the editorial material, and of the authors for their individual chapters, has been asserted in accordance with sections 77 and 78 of the Copyright, Designs and Patents Act 1988.

All rights reserved. No part of this book may be reprinted or reproduced or utilised in any form or by any electronic, mechanical, or other means, now known or hereafter invented, including photocopying and recording, or in any information storage or retrieval system, without permission in writing from the publishers.

Trademark notice:
Product or corporate names may be trademarks or registered trademarks, and are used only for identification and explanation without intent to infringe.

“Is the pursuit of justice a necessary route to lasting peace in post-conflict settings? Do peace-building efforts routinely undermine durable justice? The editors explode this false dichotomy in their exciting new volume. Drawing on recent experiences from Colombia and Sierra Leone to Lebanon and Uganda they consider the trade-offs routinely confronted by traumatised societies at war’s end. They show how activities often cast as oppositional, in particular restorative justice versus disarmament, demobilization and reintegration, are more closely aligned than assumed.”

“Through nuanced case studies guided by a fresh analytical framework, the book manages to convey both the local complexity faced by countries undergoing transition, as well as the common challenges and opportunities. It asks practical questions and provides much food for reflection for both academics and practitioners.”

2
Bridging the gap: The United Nations Peacebuilding Commission and the challenges of integrating DDR and transitional justice

6
Peacebuilding and transitional justice in Cambodia: Attempts at DDR and the rise of victim-centered justice

7
Unfinished business: Peacebuilding, accountability, and rule of law in Lebanon

8
Building peace and delivering justice in Bosnia and Herzegovina: The limits of externally driven processes

11
The supposed accountability/peacebuilding dilemma in Uganda

12
Colombia: Accountability and DDR in the pursuit of peace?

13
The national accord, impunity, and the fragile peace in Kenya

14
Conclusions and considerations for practitioners

Stephen Brown
is Associate Professor of Political Science at the University of Ottawa, Canada. His main research interests are foreign aid, democratization, political violence, peacebuilding, and transitional justice, especially in relation to sub-Saharan Africa. He has published widely on various aspects of Kenyan politics. He maintains a website at <
http://aix1.uottawa.ca/~brown
>.

Par Engstrom
(BA UCL, MSc London, DPhil Oxford) is Lecturer in Human Rights at the Human Rights Consortium, School of Advanced Study, University of London, UK. He is also co-chair of the London Transitional Justice Network. His current research interests focus on regional human rights institutions with a particular reference to the Inter-American human rights system, transitional justice, and the international relations of the Americas.

Jemima García-Godos
(Dr. Polit. Human Geography, University of Oslo, Norway) is currently a researcher at the Norwegian Centre for Human Rights, University of Oslo and the Chr. Michelsen Institute, Norway. Her research on transitional justice focuses on victim reparations and Latin America. She has published in
the Journal of Latin American Studies, International Journal of Transitional Justice
and
Nordic Journal of Human Rights
.

Johanna Herman
is Research Fellow at the Centre of Human Rights in Conflict at the University of East London, UK. Her research includes transitional justice, peacebuilding, human rights and the participation of victims at the Extraordinary Chambers in the Courts of Cambodia. She received her MA in International Affairs from Columbia University’s (NY) School of International and Public Affairs.

Olga Martin-Ortega
is Senior Research Fellow at the Centre on Human Rights in Conflict, University of East London, UK. Her research focuses on the peacebuilding, transitional justice and human rights responsibilities of multinational corporations. She is the author of
Empresas Multinacionales y Derechos Humanos en Derecho Internacional
(2008).

Rosemary Nagy
is Associate Professor in Gender Equality and Social Justice at Nipissing University in North Bay, Canada. Her research in transitional justice
examines the interactions between local and global processes and norms, including in South Africa, Rwanda, Uganda, and Canada. She is co-editor (with Melissa Williams and Jon Elster) of the forthcoming
Transitional Justice
volume of the Nomos Yearbook of the American Society for Political and Legal Philosophy.

Joanna R. Quinn
is Associate Professor of Political Science, Director of the Centre for Transitional Justice and Post-Conflict Reconstruction, and Director of The Africa Institute at The University of Western Ontario, Canada. Her current research considers the utility of customary practices of justice in the acknowledgement of past crimes.

Dustin Sharp
is an Assistant Professor at the Kroc School of Peace Studies at the University of San Diego, CA. A graduate of Harvard Law School (MA), he formerly served as a researcher at Human Rights Watch, covering Francophone West Africa. His academic work focuses on the role of law in post-conflict reconstruction.

Chandra Lekha Sriram
is Professor of Law at the University of London, School of Oriental and African Studies, UK. She has written extensively on conflict prevention, transitional justice, international criminal accountability, and peacemaking and peacebuilding. She is the author most recently of
Peace as Governance: Power-Sharing, Armed Groups, and Contemporary Peace Negotiations
(Palgrave, 2008).

The Stolen Child by Keith Donohue
Unzipped? by Karen Kendall
A Kind of Truth by Lane Hayes
The Christmas Genie by Dan Gutman, Dan Santat
The Millionaire by Victoria Purman
The Ties That Bind by T. Starnes
Real World by Natsuo Kirino
Fractured by Karin Slaughter
Laina Turner - Presley Thurman 05 - Gems & Gunshots by Laina Turner
The Curse of the Ancient Emerald by Franklin W. Dixon