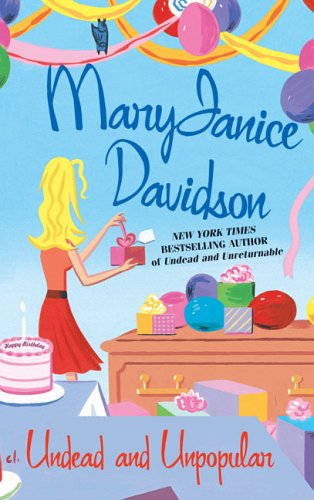 who got me my first rejection slip.

No one comes up with a book totally on their own—if that was the case, authors would get 100 percent of the royalties. Some of the people who helped themselves to my cut, or should otherwise start charging me for their services:

My editor, Cindy Hwang; the entire Berkley Sensation team; my agent, Ethan Ellenberg; Darla (from Team Laurell K. Hamilton); my PR guru, Jessica; my husband, Anthony; my sister Yvonne; and the rest of the good-looking bums who comprise my family.

Special thanks to my grandpa for inspiration. If he can escape from a nursing home, I can make my deadlines.

Betsy's thoughts about Antonia and Garrett's new relationship make reference to the novella "A Fiend in Need," an April 2006 anthology release from Berkley titled
Dead and Loving It
. This book takes place about two months after the events of that novella.

"And the Queene shall noe the dead, and keep the dead."

—The Book of the Dead

"Keep your friends close, but keep your enemies closer."

"There's a zombie in the attic," George the Fiend informed me over breakfast. His voice was a calm pond, and he wiped blond strands out of his face carefully as he peered at his knitting.

"Sure there is," I replied. My casual response was, I decided much later, a massive mistake. I mean, here was this guy (vampire) living in the house owned by my best friend with at least three other people (two more vampires and a surgical resident), telling me what the problem was (a zombie), in plenty of time to do something about it, and I totally blew him off. Were this a horror movie and I, Betsy Taylor, Queen of the Vampires, was on the screen pulling this crap, everybody in the audience would have thrown their popcorn and Sno-Caps at the screen.

But this wasn't a movie, so I screwed up in an honest sort of way.

Also, I was distracted, crow-like, by the big shiny thing on my finger: my engagement ring. Pretty silly for someone who was supposedly already married (to the prophesied Vampire King for the next thousand years) and officially engaged (to same, one Eric Sinclair) for several weeks. But, my God, getting Sinclair to cough up a proposal had been hard enough. I was still stunned he'd come up with a ring, too.

In fact, I was still tingling from our whole previous evening together, a wacky outing involving blood-drinking, sex, a stop by Caribou Coffee for hot chocolate, and The Ring: a delightfully shiny gold band strewn with diamonds and rubies.

I'd had to make a Herculean effort not to squeal when he slid it onto my finger (where it promptly slid off; I have freakishly small hands). Now here it was, a day later, and I couldn't stop staring at the thing.

Also, it wasn't really breakfast, since neither George nor I were eating and it was eleven o'clock at night. But we still called it breakfast, since that's when Marc (the surgical resident) would often get up and have a muffin before his overnight shift.

George—well, actually, we learned his name was Garrett shortly after he began speaking—went back to the lovely baby blue afghan he was knitting, which matched the fine sweater I wore that evening. I, in turn, went back to the guest list. Not for my wedding. For my surprise birthday party. Which wasn't a surprise at all, but I wasn't telling.

It was a short list. My mom; my dad; my (sigh) stepmother, Antonia; her BabyJon; my landlord, Jessica; my fiancé, Eric Sinclair; Marc; my sister, Laura; Garrett's mate, the other Antonia; our friendly neighborhood police officer Nick; Sinclair's friend Tina; former vampire hunter Jon; and of course Garrett. Almost all of these people I had met
after
I died.

Of course, half of these guests
were
dead people. Even Marc, who was alive, often put it, "Why not be dead? Most of my ex-boyfriends act like I am anyway."

Jessica and I kept trying to fix him up, but the few gay guys we knew were not Marc's type. Not that we had any idea what Marc's type was. On top of that, fixing people up is hard. Almost as hard as—well, trying not to drink blood.

I tapped my pencil on the pad, trying to come up with a plan to tell Eric before the wedding that I had decided to completely give up the blood-drinking thing. I figured being the vampire queen had a few advantages—as it was, every vampire I'd ever known had to drink every day, even Eric. But I could go up to a week without so much as a drop of O-neg, without any shakes or desperate pleas for stray rats. So in honor of my birthday, and of being in this shit queen job for a year, I figured I'd give it up completely. I would be in a blood-free zone!

But Eric would be tricky. Normally he ignored whatever I did, but during our intimate moments, someone always got bitten. Sometimes more than once. It squicked me out to try to explain it, but drinking during sex just made the whole thing better—

"Lame, Betsy," Jessica said, coming into the kitchen and glancing over my shoulder as she headed for the espresso maker. "I can't believe you're making a list of birthday presents. Miss Manners would be rolling in her grave."

"Miss Manners is still alive. Besides, it's not a list of presents. It's a list of people you're going to invite to my surprise party."

Jessica, a painfully skinny nag with gorgeous skin the color of Godiva milk chocolate, laughed at me. "Honey, it hurts me to say this. Like a sliver in the eyeball. But we're not. Planning. A party."

"Although," I added, "you don't have to try too hard to get the Ant there. I wouldn't mind if she missed it."

"Sugar." She gave up the espresso maker as too complicated—this was a nightly ritual—and fixed herself a glass of chocolate milk instead. "You made it perfectly clear two months ago: no party. And we believed you. So stop making guest lists and worrying about your stepmother showing up. It's not happening."

"Are we talking about the nonexistent surprise party?" Tina asked, startling me as her bare feet slid noiselessly across the spotless shamrock green kitchen tile.

"I'm putting bells around your pretty, petite ankles," I told her.

Jessica had nearly choked on her drink, Tina had so startled her. She took a breath and said, "She tells us our lives won't be worth living if we throw her a party, then she makes a guest list."

"Constancy, thy name is Queen Elizabeth," Tina murmured as she slid her tiny butt onto the breakfast nook bar stool next to George—dammit, I mean Garrett. She was dressed like the most tempting college student in creation, as usual—long blond curls, big pansy eyes, knee-length black skirt, white designer T-shirt, bare legs, black pumps. Most college students nowadays hadn't witnessed the Civil War, but undead bombshells like Tina just didn't let go of their perky tits.

"What do you want for your birthday, Majesty?" she was asking me as I stared jealously at those ageless melons. Her duties nowadays were the equivalent to serving as "best man" to Eric, whom she had turned into a vampire decades ago. Nowadays, instead of sucking his blood, she limited herself to smoothing out the morning edition of the
Wall Street Journal
, fixing his tea the way he liked it, and setting out gobs of paperwork for him to look through. "Some nice shoes, I suppose."

"You suppose wrong," I replied. "I want peace on earth, goodwill toward men."

"Do they have a store for that at the mall?" Jessica asked innocently. "Or maybe one of those sales carts in the walkways, right next to the portrait artist and the guy selling T-shirts with pithy sex jokes?" She was shamelessly stealing peeks at the memos Tina laid out neatly on the marble countertop.

"It'd be the only thing they don't have," I said. "Tina, Jessica, I know you. I know I told you not to throw a party, and that therefore you will throw one. But if you want to keep up the deceit—fine. No party. Instead, find a quiet moment to pray for the aforementioned world peace and global harmony, or failing that, snag me a fat gift card from Bloomingdale's."

"Or perhaps a pair of the new Prada loafers," Jessica added.

"No, I'm sick of loafers. Spring is here—I want some strappy sandals." Which was kind of silly—I couldn't wear them with socks, and these days my extremities were pretty icy. But still. I was sick of winter, and this was Minnesota—we had at least two more months of snow.

"Right," Jess said. "Because you don't have enough of
those
."

"Why don't you take one of my existing pairs and shove them up your cute black butt?" I suggested sweetly.

"Well, Ms. Taylor, why don't you take your delicate ivory nose and—"

Tina interrupted the argument du jour. "Majesty, are there any designer shoes you don't like?"

Garrett cleared his throat as he started a different stitch—knit, garter, crochet—it was all the same to me. "She doesn't care for Packard Shah sandals. Especially the gold ones."

"This is true," I confirmed. "They're all like something out of the
Boogie Nights
prop drawer. I mean, what year is this? I'd pay two hundred bucks
not
to wear them."

"No need for that," Eric Sinclair said, ignoring my yelp and Jessica's flinch. He was worse than Tina. Where she slithered silently, he teleported like an alien. A tall, broad-shouldered, dark-haired, dark-eyed, yummilicious alien. "You have a thousand pairs of sandals."

"Do not. Leave me alone and read your papers."

"Guest list?" he asked, leaning over my shoulder and peering at my pad. "But you don't want a party."

"You're damned right I don't!" I slapped my notebook shut. In fact, I didn't. I was pretty sure. "How many times do I have to say it?"

Don't get me wrong: I can hear myself. And I'm very self-aware, regarding all my little tics and annoying quirks. Nothing triggers Maslowian self-actualization like getting body-slammed by a Pontiac Aztek.

But no matter how bad I sound to myself, I can't help it. My situation is impossible. You'd be amazed how often I'm ignored, even though I am the so-called Queen of Vampires. Repeating myself ad nauseum is one of the many ways I try to make myself heard. I am too new to the game to be quietly tough, like Sinclair. Not smart, like Tina. Not wealthy, like Jess. Not an all-seeing ghost, like Cathie. Not a clever doc, like Marc; or an indifferent psychic werewolf, like Antonia. You know what it's like to be called a queen and have the least to offer among all the people you know? It's a huge ego hit.