Read Until We Reach Home Online

Until We Reach Home 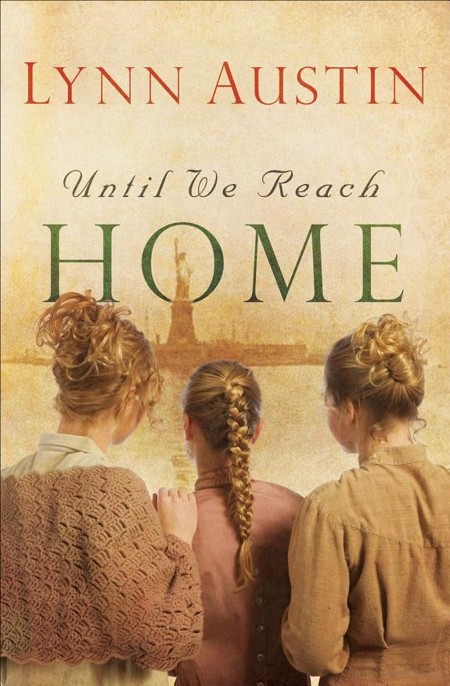 Until We Reach
HOME

To my family:
my husband, Ken;
my children, Joshua, Benjamin,
Maya and Vanessa;
my mom and dad;
and my sisters, Bonnie and Peggy

All She Ever Wanted

Until We Reach Home

Candle in the Darkness

A Light to My Path

C
HRONICLES OF THE
K
INGS

The Strength of His Hand

Faith of My Fathers

LYNN AUSTIN is a four-time Christy Award winner for her historical novels
Hidden Places, Candle in the Darkness, Fire by Night,
and
A Proper Pursuit
. In addition to writing, Lynn is a popular speaker at conferences, retreats, and various church and school events. She and her husband have three children and make their home in Illinois.

“It is good to have an end to journey
towards; but it is the journey that
matters in the end.”

E
LIN
C
ARLSON WALKED
into the barn and everything changed. Her sister Sofia stood illuminated by a shaft of sunlight as she paused from her chores; close beside her, talking softly to her, stood Uncle Sven. His hand rested on Sofia’s hair, which dangled down her back in a long, golden braid. Elin remembered the weight of his hand on her own head and for a moment she couldn’t breathe.

Her fear erupted in a strangled shout. “Sofia!”

Her sister jumped. Timid Sofia was frightened of the dark and of Aunt Karin’s geese and sometimes her own shadow. Sofia pressed her hand to her heart as she turned toward Elin.

“Elin sneaks up as quietly as a mouse, doesn’t she?” Uncle Sven said. He chuckled in his good-natured way and settled his cap on his head. He strode past Elin, touching her shoulder briefly as he left the barn, the straw crunching beneath his heavy boots.

Elin’s heart pounded. She couldn’t seem to move and didn’t trust herself to speak. Her breath plumed in the cold winter air. Sofia had returned to her chores, but she stopped and looked up again after a moment.

Sofia was sixteen, the same age Elin had been three years ago when Uncle Sven and his family had moved in with them. She needed to warn Sofia, to tell her what could happen, what nearly had happened today. But Sofia was so young, so innocent. So happy. Elin had been all of those things, too, three years ago.

Elin shook her head and hurried out of the barn, running after her uncle, fear and anger boiling inside. Her boots bit through the snow’s crust as she ran. She caught up with him when he halted near the woodpile. He slowly turned to face her.

“Eh? You want something, Elin?”

How dare he pretend not to know. How dare he smile as if nothing had ever happened. Elin opened her mouth, longing to shout,
“You leave Sofia alone!”
But nothing came out.

Uncle Sven stared at her, his eyes boring into hers, his smile never wavering. Then he bent over, lifting the axe in one hand, a log in the other. He balanced the log on its end on the tree stump, then split it in two with one blow.

“You will be very sorry if you tell.”

Elin’s anger dissolved, leaving only her fear. She was speechless. Helpless.

She turned away and hurried back to the barn, aware that everything had changed. She would have to guard her sister night and day from now on. She could never leave Sofia alone with him again. Or Kirsten, either. Kirsten was their middle sister and only eighteen—had their uncle been alone with her, too?

Fear squeezed Elin’s chest as she watched Sofia put fresh hay in the cow stalls. The steady
thwack
s of her uncle’s axe continued outside the barn. Elin drew a shaky breath, struggling to keep her voice calm. “That’s good enough for today, Sofia. Go on up to the house.”

“Why? What’s wrong with you? Your face is as white as milk.”

“Nothing’s wrong.” She snatched the hay fork from Sofia’s hand and leaned it against the wall. “I’ll walk with you.”

“You act so crazy sometimes,” Sofia said with a frown.

No one will believe you, Elin. They will say you are crazy.

Perhaps she was crazy. The pressure in her chest increased as she drew another painful breath and tried to speak casually. “What was Uncle Sven doing in here?”

“You’ll never guess!” Sofia’s pale blue eyes sparkled with happiness. “He said I could ride to the village with him tomorrow if I wanted to. He said he would buy me a treat at Magnusson’s store—anything I wanted.”

So that was how it would begin for Sofia. She craved sweets as much as Elin had craved solace after Mama and Papa had died. Uncle Sven had offered Elin soothing words and warm arms and a comforting shoulder.
“You are special, Elin. Do you know that? My special girl.”
Now Sofia’s trust would be bought with peppermints and licorice sticks.

“But Uncle Sven said that I—”

“You and I will go into town another time. Now come up to the house with me.” She tried to link arms with her sister, but Sofia pulled away. The happy expression on her sweet round face transformed into anger.

“I know, I know. . . . But listen, why are you working out here in the barn, anyway? I thought it was Kirsten’s turn to do this. Where is she? And aren’t you supposed to be watching the children for Aunt Karin?”

“Kirsten took them for a walk in the woods. She promised to wash the dishes for a week if I switched chores with her.”

Knowing Kirsten, she and their three young cousins were chasing after elves or hunting for trolls. Every meandering walk through the woods was an adventure for Kirsten, every boulder a crouching troll, every rustling breeze an elf scurrying away. Elin felt her stomach turn over as she remembered how often Kirsten had worked alone in the barn these past few weeks.

But no, Uncle Sven wouldn’t be able to deceive Kirsten, would he? For one thing, she never slowed down or stood still long enough to become ensnared by his lies. And for another thing, she was as sturdy and bold as their Viking ancestors, seldom following anyone’s rules, acting more like a boy than a girl much of the time. Kirsten would much rather escape from work altogether and explore the forest than sit by the fire and do needlework. Even her straw-blond hair was unruly, always managing to escape from its hairpins and braids to fly as freely as she did.

No, their uncle would find it easier to entice Sofia. She was gentle and shy, with a quiet, compliant nature. She was built more like Elin, too, with fine, delicate bones. Elin remembered the day her uncle had slipped his thick fingers around her wrist and whispered, “
Look at that, Elin. As slim as a twig. I could snap the bone, just like that.”
But those threats had come later, after Elin had grown older and had begun to pull away from him.

She noticed that the sound of the axe had stopped. Her heart sped up. “Come up to the house with me, Sofia. Now!”

“I’m not angry. I-I just don’t like it when you and Kirsten swap chores. She always takes advantage of you.” She steered Sofia out of the barn, quickly glancing at the woodpile. Uncle Sven was gone. Elin scanned the fringes of forestland that bordered their farm in search of Kirsten, certain she would be able to spot her bright red coat and striped blue apron. There was no sign of her, either.