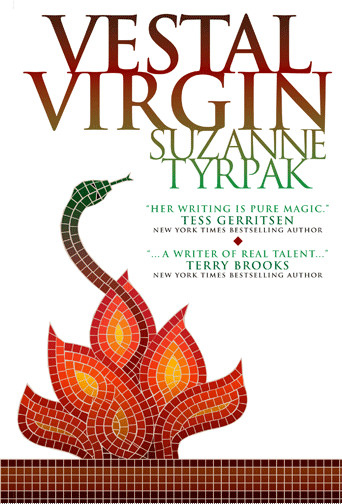 Although I did extensive research in order to write VESTAL VIRGIN, the book is a work of fiction. If the characters have any similarity to people who have lived in the past 1,000 years, that is coincidental.

For more information about the artist, please visit www.jeroentenberge.com

I’m always on the lookout for a great read, and nothing engrosses like well-researched historical fiction with a killer of a story and characters you both love and hate. All that and more lies waiting in the following pages of Suzanne Tyrpak’s phenomenal debut, VESTAL VIRGIN.

Picture this: a gripping story set against ancient Rome and peopled with the major players of the time...a prophet named Paul, our hero, Elissa—a vestal virgin sworn to chastity—and of course, the psychopathic, megalomaniac Nero.

To say more would spoil the joy of discovering all that this novel has up its sleeve, so just trust me...you’ve never read classic Rome done like this, a fully-evoked world, meticulously researched, yet compulsively readable.

Only do yourself a favor and don’t start reading until you’ve got some time on your hands.

Because you won’t be able to stop.

Vestal Virgin
takes place A.D. 63-64. My research includes extensive reading, two trips to Italy, consulting with scholars, and a life-long fascination with ancient cultures. The story is rooted in history, and although some of these events did occur, and some are conjecture, the story is fiction. Any resemblance to people currently alive, or those who have been alive in the last 1900 years, is coincidence.

Agrippina—
"The Younger," Roman Empress and mother of Nero, married to the Emperor Claudius, sister of the Emperor Caligula

Lucan—
a poet, and nephew of Seneca

Paul of Tarsus—
the prophet Paul, a follower of "The Way," and Jesus

I give you tears, and words of sorrow at our parting,

but this ground cares not for my salt, the dead remain silent.

Fate stole you, took you from me, heart and soul,

these rituals I perform, were passed down from our ancestors,

I weep for you, the dead, for tears are my inheritance.

The Kalends of October

…though they may condemn me, the words I write are heartfelt. I no longer trust Nero, no longer trust the gods. I don’t fear death, but life. This life devoid of passion. My fate has never been my own—my destiny decided ten years ago when I was pledged to thirty years of chastity. Keep this letter close, for I trust only you.

She set down the stylus and read what she’d written. Could a person be condemned merely for thinking?

Through the narrow window of her chamber, a breeze brought the scent of roses, the last of autumn. Soon it would be winter, but sequestered within the House of Vestals the world seemed seasonless.

“Elissa—” a voice called from beyond the doorway’s curtain.

She snatched the papyrus, thrust it into the bodice of her stola, and turned on her stool. Angerona, her fellow priestess, swept open the curtain. Unfettered by her veil, her auburn tresses fell over her shoulders in a wild cascade of curls. Beside her, Elissa felt small and dark. She ran her tongue over her teeth, the tip lingering on her deformity.

“I’ve been looking for you everywhere.” Angerona’s face was flushed, which only made her prettier. She sounded breathless, “I thought I’d find you working in the garden then I checked the library—”

“Why aren’t you at the agora?” Elissa wiped ink from the stylus, replaced it in the jar with others, hoping Angerona wouldn’t ask what she’d been writing. “All you’ve talked about for days is that gold bracelet. I thought you’d be haggling with the merchant. Did you finally get your price?”

“So you haven’t heard—” Angerona’s voice trailed off.

“All of Rome is whispering. I thought, by now, you would have known.” She touched Elissa’s shoulder, and something in her touch made Elissa shiver. “Your brother has been charged with treason.”

“They say, Marcus has been plotting Nero’s assassination. They say—”

“My source is reliable.”

Elissa seldom raised her voice, but now she did, “Gossip will be your ruin, Angerona. Vicious lies.”

Angerona looked close to tears. She reached into the folds of her stola and withdrew a scroll. “This came for you by messenger.”

Her mouth went dry. The gods had acted swiftly, punishing her hubris. “There must be a mistake,” she said. “A Roman citizen, the son of a senator, can’t be treated like a common criminal.”

“First your father, now my brother—Nero holds himself above the law.” Elissa took a breath and willed her heart to beat more slowly. “I’ve got to hurry.”

“You’re going to the circus?”

“The emperor requests my presence. Perhaps Nero’s forgotten how my family has supported him.”

“Let’s speak to the Vestal Maxima,” Angerona said, “request she file a petition and ask your brother’s life be spared. Even Nero can’t refuse a vestal’s intervention on behalf of a prisoner—”

“At least, change your robe. Your hem is stained from pulling weeds.”

“I don’t want to be recognized.”

“Yes.” Elissa slid them on her feet, barely noticed. She had to get to Nero soon, and with no pompous retinue. Digging through her cedar chest, she found her oldest palla. She flung the shawl over her head and wrapped it around her shoulders.

“Good. No one will notice me.”

Elissa ripped open the doorway’s curtain. The cubicles where the six virgins slept stood empty, the inhabitants occupied elsewhere with their work—invoking blessings for the sick, copying documents, tending the sacred fire. She glanced at the closed door of the Vestal Maxima’s private chambers. At this hour Mother Amelia would be busy contracting wills and legal documents, conferring with dignitaries from the farthest reaches of the empire, downstairs in the library.

Angerona followed at Elissa’s heels. “At least take a lictor.”

“No bodyguard. I don’t want to be recognized.”

Lifting her soiled hem, Elissa hurried down the marble stairway. Sun poured through the open ceiling of the atrium, dancing on the central pool. Serving women, carrying baskets heaped with linen, made their way along the pillared hallway and out into the courtyard where vats of water boiled. Laundry day kept the household busy—and made it easy to escape.

She opened a side door, which lead out to the street.

Angerona stepped in front of her. “You can’t go to the Circus Maximus alone—”

Elissa and Angerona faced each other, their breath mingling, their thoughts transparent. Torn from their families at an early age, bound by vows, they were closer than blood sisters.

Angerona had lost her glow. Her tear-streaked face looked pale as leaden powder. Of course she wouldn’t come. For all her bluster and emotion, she possessed a strong instinct for self-preservation. And to confront Nero bordered on insanity.

Elissa brushed a damp curl away from Angerona’s forehead. “Don’t worry, sweet. Nero loved my brother once. I’ll remind him, and you know I can be convincing.”

“What shall I tell the Vestal Maxima?”

She left Angerona gaping and walked briskly toward the forum.

Last of the Cold War Spies by Roland Perry
Anna in Chains by Merrill Joan Gerber
American Gods by Neil Gaiman
Flesh and Blood by Nick Gifford
The Witches of Karres by James H. Schmitz
Trickster's Choice by Tamora Pierce
The Ultimate Werewolf by Byron Preiss (ed)
Meant to Be (RightMatch.com Trilogy) by Shay, Kathryn
The Devil's Closet by Stacy Dittrich
Singing the Dogstar Blues by Alison Goodman