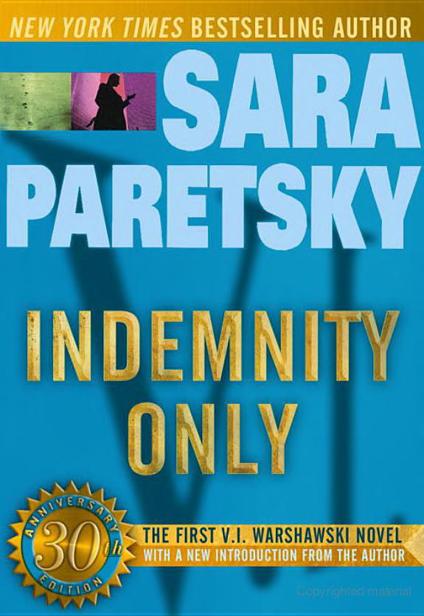 Praise for Sara Paretsky and Her Detective Series Featuring V. I. Warshawski

“WHO IS AMERICA’S MOST CONVINCING AND ENGAGING PROFESSIONAL FEMALE PRIVATE EYE? V. I. WARSHAWSKI, the star of Sara Paretsky’s series about white-collar crime and wall-to-wall corruption in Chicago, now clearly leads the growing field.”

“[V. I. WARSHAWSKI] IS… WONDERFUL COMPANY AND A RICH DISCOVERY AWAITING THOSE WHO HAVE YET TO MEET HER.”

“What really continues to amaze and impress about this series is V.I. herself, UNDOUBTEDLY ONE OF THE BEST-WRITTEN CHARACTERS IN MYSTERY FICTION.”

“Paretsky’s work does more than turn a genre upside down: Her books are beautifully paced and plotted.… The dialogue is fresh and smart.”

“NOT SINCE CRIME-FICTION MASTERS RAYMOND CHANDLER AND DASHIELL HAMMETT has a mystery writer integrated a character and an environment so seamlessly, to such telling, vibrant effect.”

“VICTORIA IPHIGENIA WARSHAWSKI IS … AT ONCE THE MOST ENDEARING AND MOST IRRITATING PRIVATE EYE IN TODAY’S MYSTERY FICTION. She’s full of wisecracking cussedness and vulnerability, and her sandpapery tenderness just gets better with each novel Sara Paretsky turns out.”

“[V. I. WARSHAWSKI IS] THE DETECTIVE MYSTERY FANS HAVE BEEN WAITING FOR.”

“BEST OF ALL IS VIC HERSELF, SPUNKY, FIERCE AND FUNNY.”

“V.I. (‘DON’T CALL ME VICKY’) IS TOUGH ON CROOKS.… Her stubbornness, her acerbic tongue, and her impatience with weakness may not make her a convivial dinner partner, but she’s great company in a mystery.”

“PARETSKY IS A SMOOTH WRITER AND A FUNNY WOMAN, good at evoking seedy urban environments and taking wry potshots at middle-class aspirations.… [She] has created a scrappy, entertaining, idiosyncratic fictional character who is a woman, so hooray for her!”

“V. I. WARSHAWSKI IS ONE OF THE MOST INTERESTING PRIVATE EYES IN THE BUSINESS TODAY, and with each story novelist Sara Paretsky gets better and bolder.”

WOMEN ON THE CASE
A WOMAN’S EYE

For Stuart Kaminsky. Thanks.

Chapter 2 - Dropping Out of School

Chapter 6 - In the Cool of the Night

Chapter 7 - A Little Help from a Friend

Chapter 14 - In the Heat of the Night

Chapter 18 - Blood is Thicker Than Gold

On New Year’s Eve, flushed with champagne, I made a secret resolution to write a novel in 1979 or send that fantasy packing along with my daydreams of singing at La Scala or dancing with Nureyev. The next day I began:

I looked hopefully in my wallet, but found only the two greasy singles which had been there in the morning. I could get a sandwich, or a pack of cigarettes and a cheap shot of scotch. I sighed and looked down at the Wabash Avenue el tracks.

Nine months later, I’d added about fifty pages to this unpromising opening and thought I should resign myself to a life of selling computers to insurance agents. At that point a co-worker named Mary Hogan, who knew about my efforts, showed me the Northwestern University fall extension catalog. Stuart Kaminsky was teaching an evening course called
“Writing Detective Fiction for Publication.” I felt like Alice finding the mushroom—just what I needed to get to be the right size.

Stuart read my puny story with great care. He gave me essential advice for thinking about my character and my story. In the process, V. I. stopped smoking and took up my whiskey, Black Label. Most important, Stuart became the voice I needed to hear, the voice that said, “You can write. You can do this thing.” Without Stuart I would not have had the confidence to push the story through to the end. That is why
Indemnity Only
is dedicated to him.

Whenever I read the memoirs of a writer like Sartre, who says he knew from childhood he was “destined for words,” or Bellow, who knew he “was born to be a performing or interpretive creature,” I wonder what unacknowledged voice spoke to them as children. Sartre actually tells us it was his mother and his grandfather who bound his childish effusions as novels and passed them with much outspoken pride around the neighborhood. Without his family creating in him that vision of himself, young Jean-Paul could not have grown up with such a sense of destiny. His cousins, told at the same age they were fated to be engineers, became engineers.

I wrote from my earliest childhood, but for myself only. Like the heroine of
Dream Girl,
I spent vast amounts of my waking hours imagining myself inside different stories; when they acquired some kind of shape, I wrote them down. But I thought my stories were a sign of the sickness afflicting the woman in the
play, and that true love would cure me as it did her, for I grew up in a time and place where little girls were destined to be wives and mothers.

I did find true love, but my husband, Courtenay Wright, convinced me that my stories were worth telling, that my dreams signaled not sickness but a lively mind. His support has not wavered from that cold New Year’s Day to the present hot June in which I struggle with my seventh V. I. novel. I have had some years of terrible pain and disability in between; Courtenay has held on to me and kept me from losing that essential core from which my stories come. In a way, every word I write is dedicated to Courtenay.

When I finished the manuscript in May 1980, with the first weak paragraph and limp chapter exchanged for the current one, Stuart Kaminsky sent it to his agent, Dominick Abel, in New York. Dominick took on V. I. and me and has stuck with us ever since. I don’t want to turn this introduction into a volume of the Talmud, so I’ll only say of Dominick, in the old Chinese words, that I would send him for horses.

It took him a year to find a publisher for
Indemnity Only.
Indeed, when I’m getting too conceited with myself, I pull out the file of rejection letters from that year and read that I’m “too talky”; have “wooden characters”; wrote a “derivative story”; and that
Indemnity Only
was a “marginal book which we can’t afford to take on.” The file is a nice fat one and a good antidote for vanity. In the face of so much negativism, I’m especially grateful to Nancy van Itallie and the Dial Press for taking the gamble on publishing me.

The Dial Press is no more, and that is sad.
*
But after almost a decade of wandering I’ve found my proper home at Delacorte. Jackie Farber and Carole Baron provide the kind of editorial and publishing support most writers only dream about.

Indemnity Only
came to life so precariously that it remains very precious to me. Sometimes I look at it with amazement—amazed that I did find the strength to write a book, amazed that someone actually published it. And now that Delacorte is bringing out a new edition I look at it with a lot of pride. I was tempted to go through and polish up the writing, change those flaws I wasn’t alert enough to see in 1979. But I decided it would be unethical to tamper with the text. With the exception of two very small corrections this is the same book I sent Dominick Abel ten years ago.

The night air was thick and damp. As I drove south along Lake Michigan, I could smell rotting alewives like a faint perfume on the heavy air. Little fires shone here and there from late-night barbecues in the park. On the water a host of green and red running lights showed people seeking relief from the sultry air. On shore traffic was heavy, the city moving restlessly, trying to breathe. It was July in Chicago.

I got off Lake Shore Drive at Randolph Street and swung down Wabash under the iron arches of the elevated tracks, At Monroe I stopped the car and got out.

Away from the lake the city was quieter. The South Loop, with no entertainment beyond a few peep-shows and the city lockup, was deserted—a drunk weaving uncertainly down the street was my only companion. I crossed Wabash and went into the Pulteney Building next to the Monroe Street Tobacco Store. At night it looked like a terrible place to have an office. The hall’s mosaic-tiled walls were chipped and dirty. I wondered if anyone ever washed the
scuffed linoleum floor. The lobby must create a reassuring impression on potential clients.

I pushed the elevator button. No response. I tried again. Again no response. I shoved open the heavy stairwell door, climbing slowly to the fourth floor. It was cool in the stairwell and I lingered there a few minutes before moving on down the badly lit hallway to the east end, the end where rents are cheaper because all the offices look out on the Wabash el. In the dim light I could read the inscription on the door: “V. I. Warshawski. Private Investigator.”

I had called my answering service from a filling station on the North Side, just a routine check on my way home to a shower, air conditioning, and a late supper. I was surprised when they told me I had a caller, and unhappy when they said he’d refused to give a name. Anonymous callers are a pain. They usually have something to hide, often something criminal, and they don’t leave their names just so you can’t find out what they’re hiding ahead of time.

This guy was coming at 9:15, which didn’t even give me time to eat. I’d spent a frustrating afternoon in the ozone-laden heat trying to track down a printer who owed me fifteen hundred dollars. I’d saved his firm from being muscled out by a national chain last spring and now I was sorry I’d done it. If my checking account hadn’t been so damned anemic, I’d have ignored this phone call. As it was, I squared my shoulders and unlocked the door.

Ground Money by Rex Burns
Trick or Treatment by Simon Singh, Edzard Ernst M.D.
The Arch and the Butterfly by Mohammed Achaari
The Measure of a Heart by Janette Oke
The Beggar's Garden by Michael Christie
30 Guys in 30 Days by Micol Ostow
Entwined Destinies by Robin Briar
Gabriel García Márquez by Ilan Stavans
Highland Flame (Highland Brides) by Greiman, Lois
In the Flesh by Clive Barker