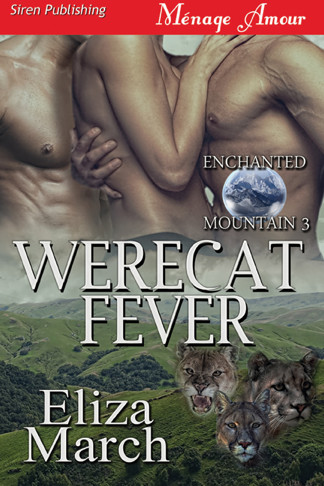 Weeks after his engagement, Bryan Cauldwell disappeared. Worse yet, the last time Lacey Hampton saw him he was covered in blood after a blackout. What should she think later when her father is found killed, a victim of an animal attack? Hunter Harris searched for Bryan, his lost littermate, for years, finally rescuing him when he's severely wounded by WereCats. Hunter can help Bryan adjust to being a shifter if he'll let him. Unless the woman Bryan imprinted on accepts him, he's doomed to being chained during every full moon. After checking on Lacey, they discover Bryan infected her, and she's showing signs of changing. Although she's going to need help, she's spitting mad, and when Hunter tries to help, his cat imprints on her, too. Bryan must convince Lacey he's innocent of her father's murder, and Hunter must convince her he loves her in spite of the bond between them. Can she accept her shifter nature and devote her life to two men?

Note: There is no sexual relationship or touching for titillation between or among siblings.

If you have purchased this copy of
WereCat Fever
by Eliza March from BookStrand.com or its official distributors, thank you. Also, thank you for not sharing your copy of this book.

This is Eliza March’s livelihood. It’s fair and simple. Please respect Ms. March’s right to earn a living from her work.

To love. To romance. To happily ever afters.

Lacey Hampton studied the huge Colorado night sky, trying to settle her nerves. With the exception of a single thin strip of cloud crossing the waning full moon, the sky was brilliantly clear. The stars looked like glitter sprinkled on a black backdrop. While she waited for Bryan, she permitted herself the luxury of relaxing in the roiling waters of the quiet grotto. The spring soothed out the kinks and tension in her muscles.

“Lady, you look mighty tempting sprawled out here in these bubbles,” Bryan whispered. His unexpected words and his breath at her ear took her by surprise.

She jumped. “Oh! You!” The reaction sent water splashing everywhere, especially all over him. His deep, raspy chuckle told her the reaction was exactly the one he expected.

A shiver of anticipation ran down her spine, and yet her emotions remained bittersweet. Tomorrow he’d be leaving and wouldn’t be back until the day after his graduation, and they still hadn’t settled anything about their future. Besides, where would they go if she could go away with him? Her Master’s program couldn’t be postponed, and he hadn’t made up his mind about law school, yet. Lacey closed her eyes and let out a sigh. For now, she wouldn’t think about Monday. Tonight she had one last chance to give Bryan a memory he’d never forget, and the grotto was the perfect place to enact her plan. Tonight she intended to worship his body the way he worshiped hers. She only hoped the memory would be enough to keep them both satisfied until he graduated.

He walked around to the smooth, rocky ledge and sat with that same graceful silence then hushed her with a mind-blowing kiss. His soft lips pressed hers open—his tongue so demanding and possessive, she forgot the question she wanted to ask.

When he finally released her, Lacey noticed he was just as affected as she was.

“H–how did you manage to get back here so quietly? I heard you at the cave entrance—”

“That was MacBride.” He paused and inhaled several more times before he answered. There was a definite huskiness in his voice. “Thomas left the Jeep and took the horses back to your place for me.”

“Don’t let me forget to thank him for being a good neighbor.”

Thomas MacBride had moved into the house on the ranch down the road from Lacey’s when she was about three. They shared a kiddie pool naked a few summers and a friendship after that. When her father added Bryan to their weekend fishing trips, the three became inseparable.

No one mentioned the bruises or the way Bryan’s stepmother began undermining his relationship with his father after Tory was born. Lacey’s dad was Cauldwell’s foreman, so they all kept their mouths shut and tried to protect Bryan. Later, when she and Bryan started dating, Thomas kept them off old man Cauldwell’s radar.

“He’s going out with Candace Holmes for me.” Bryan wrapped an arm around her shoulder and pulled her into his embrace. “The arrangement is symbiotic. He’s been trying to get in her pants all year, so consider him thanked,” he said and pressed his mouth to hers before she could laugh.

The kiss deepened as he thrust his tongue inside her welcoming mouth and the laugh disappeared. Bryan’s action felt like a claiming, as if he was branding himself on her, and as always, his hunger spread through her leaving her breathless and needy for him. The sound of her heart beating in her ears was so loud it drowned out the quiet sounds of nature.

Whatever had been ailing Bryan, what she had planned was sure to distract him. Something was bothering him besides the fever he came home with and he wasn’t saying what. To make matters worse, Lacey hadn’t been able to wheedle it out of him.

Every time she thought about the plan she devised, heat melted her insides, reminding her how she’d be pleasing all of him in just that way, shortly.

His hands ran over her naked shoulders and dipped beneath the bubbles, but Lacey anticipated them as they skimmed down her sides and back up, cupping her breasts.

“You have the most perfect breasts.” His thumbs brushed back and forth across her nipples, and when they peaked, he feathered the backs of his hands over them, and then proceeded to explore the rest of her body.

Her skin shivered with anticipation.

“I love the way you react to my touch.”

The beneficial effect of the warm water soothed her concerns. At the same time, the natural, effervescent mineral springs stimulated her longing for Bryan’s touch. The bubbles caressed her skin, teasing her most intimate places, and the sensation on her hypersensitive skin forced her breath to catch.

“You like this, don’t you?” he asked, swirling a finger in circles around her nipple. “Open your legs wider so the bubbles hit all your highly sensitive spots.”

She released an unexpected gasp and relaxed into the delightful experience. It felt almost as good as when he used his tongue on her.

Almost… Nothing was quite as good as having his talented mouth and hands exploring her body. Imagining the way he would explore those same sensitive nerves when he touched her made her moan.

“Hurry up.” Lacey tugged at him. “Take your clothes off and get in.”

“Mmm.” Bryan chuckled, returning to tease the tip of her nipple with a gentle pinch. “What’s the rush?”

God, he knew just where to touch her. She couldn’t wait to show him what she planned.

“Selfish, I guess. I want you inside me as often as possible before you leave.”

With an urgency Lacey didn’t miss, he rolled the black T-shirt up and over his broad shoulders. Every lean muscle rippled with the effort.

“Whoa! I swear you’re bigger than you were at spring break. What are they feeding you down there?”

He grinned and flexed a few muscles before he cupped his groin. “I’m growing. But it’s not the food that’s doing it.”

“Oh! No, kidding…” Lacey opened her eyes wide and paused when she saw the size of the bulge in his jeans. She’d had her hands on him and felt him inside her often enough to know this was different. The sight made her mouth water. As soon as she got her hands on him she was going to trace each defining line with her fingers, first fanning her hands across his chest and every inch of that golden skin and then with her tongue.

“You’ll get no objection from me. If I had my way, I’d be balls deep inside you all the time.”

“Sounds like an interesting plan if we can take a break every now and again to eat.” Looking at the growing bulge, she wasn’t sure how much of him she could take in her mouth, but she couldn’t give up her plan without trying. With a renewed enthusiasm, she decided to give him her best effort.