Read When the Tripods Came Online

When the Tripods Came 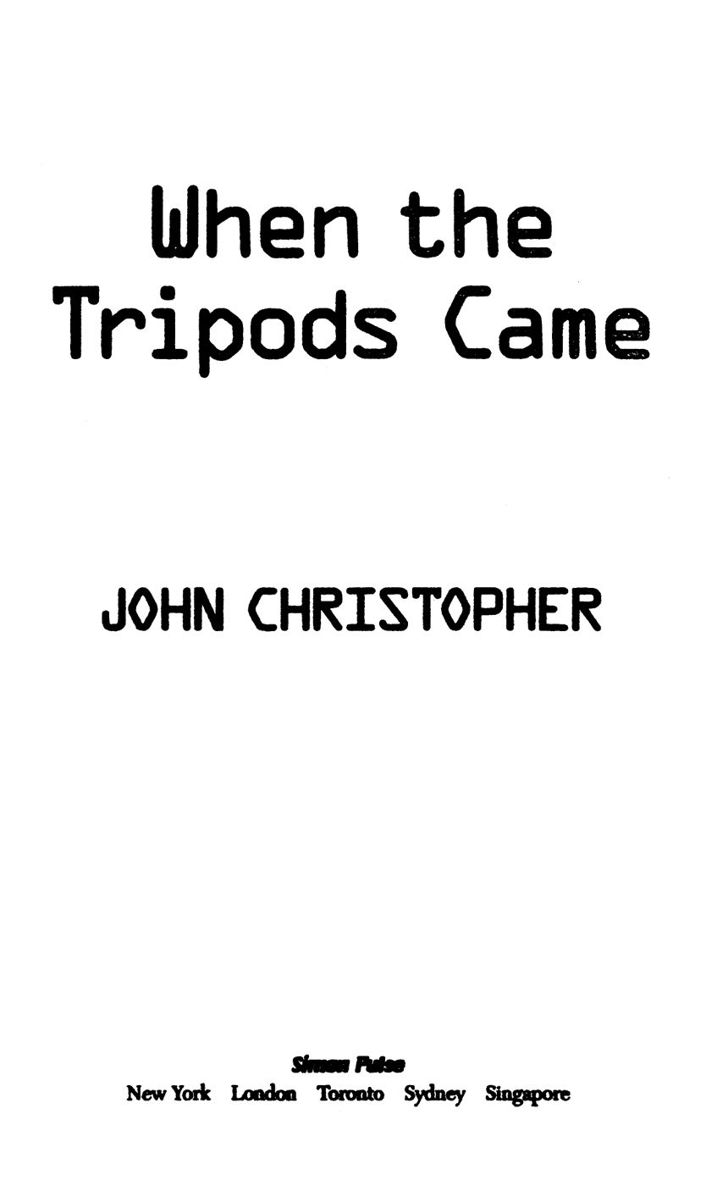 To my many grandchildren

In 1985, when the Tripods had been around for a mere eighteen years, the British Broadcasting Corporation sponsored a television adaptation. It was an ambitious project, planned to feature three thirteen-part serials, covering each of the books of the trilogy in successive years. It had some initial success, but then faltered, for reasons which were never made clear. The BBC withdrew their support after the second series, and the third was never made. As the author of the books, I had mixed feelings about this: For the first half of the first series the producer had followed my story line reasonably closely, but in the second half he made a lot of changes, and in the second series even more. It eventually reached a point where I found it difficult to trace any connection with the original. Writers of books, of course, have little if any say in what happens to them when they are translated into films or television, and this is probably sensible. Making a film or television play requires very different skills from those you need in writing a book.

While the second series was showing, it was discussed in a television program by a panel of
viewers, among them the leading British science fiction author of the time. He was very critical of what he had seen on his screen. He commented on the fundamental improbability of the Tripods—who, he scornfully pointed out, had used mere searchlights in hunting the fugitive boys—being able to overcome the technological might of the human race. How could one take seriously an interplanetary invader who didn’t even have infrared?

The remark about infrared is an interesting example of one of the basic weaknesses of science fiction: It is not very good at guessing the future, particularly in technical matters. When I wrote the books, infrared was little more than a laboratory tool; twenty years later it was in everyday use for switching television channels from the comfort of one’s armchair. (Some older readers may recall that the very first remote controls were not infrared but optical, projecting beams of light.) For every roughly accurate prediction (such as the use of tanks as a military weapon, by H. G. Wells), there are scores, probably hundreds, maybe thousands of failures. No science fiction writer in the sixties, for instance, ever dreamed of the late twentieth-century innovation which was going to fundamentally change our lives: the World Wide Web.

What I also realized in regard to his criticism was that the famous science fiction writer seemed not to have read the books, or at least not closely. In
The City of Gold and Lead,
Will is forced to act as a personal attendant to one of the Masters. This particular Master is more curious and freethinking than the rest. (Though that does not count for a lot: As a species they are not particularly flexible in their attitudes.) He talks freely to his slave, and Will, seeking any scrap of information which might help his people in their struggle for liberation, listens closely. One of the things the Master talks about is the way in which they conquered the earth.

The Masters had come from a world circling a distant star, seeking suitable places to colonize just as the western Europeans did in the fifteenth century. Their spaceship traveled at close to the speed of light, but despite the fact that their life span was much longer than ours, the journey had been long and irksome. They had had to endure many disappointments, finding many suns without planets, or with planets unsuitable for colonization. When, in the shape of our green and fertile earth, they finally found a suitable objective for their ambition, it proved also to be a planet inhabited by a species not very much inferior to their own.
They had to think very carefully about the right way to overcome human resistance:

They recognized that in man they had an enemy who might be formidable. . . . Men had already begun to build ships that would take them across the [interplanetary] emptiness. They had nothing like the ships of the Masters, but they had started, and they were learning fast. And they had weapons. . . . If they had brought their ship down to the earth, and made a bridgehead, that bridgehead would have been destroyed. They had to find a different method. The one they chose lay in a field of knowledge in which they were even more advanced than star traveling—the understanding and control of the mind. (
The City of Gold and Lead,
pages 144
–145)

The secret of success in battle lies often not so much in the use of one’s own strength but in the exploitation of the other side’s weaknesses. For years the Masters’ great spaceship orbited the earth, waiting and watching and listening. What was the particular weakness which would enable them to bypass the powerful human defenses, and strike home?

It seemed to me that it might be a good idea to go back and tell that story—the story of how it all began. Will and Henry, Beanpole and Fritz were born in a world under the shadow of the Tripods, and had to fight against a centuries-old tyranny to secure their personal freedoms and the freedom of the human race. What would it have been like to be a young person at the beginning, watching this terrible thing happen, fighting a losing battle?

And yet it was a battle that seemed in the beginning almost comically easy to win. Laurie and his friend Andy, on a camping holiday, are witnesses to the first Tripod on earth. It is a frightening sight, bestriding the peaceful countryside, smashing a house into ruins, lifting a man with its thirty-foot tentacle into what looks like a mouth, carelessly destroying a barking dog. The Tripod deals just as ruthlessly with the tanks that are mustered to attack it. But then in come fighter-bombers, firing rockets. “I saw the long spindly legs shatter, the capsule tilt and sway and crash,” Laurie says. “I could hardly believe how quickly it was over—and how completely” (
When the Tripods Came,
page 11
).

The Invasion of the Tripods becomes the joke of the year, all around the world. Still
laughing, people go back to their old ways—to watching television, particularly a new show that centers on poking fun at our would-be conquerors. Or is it really poking fun? In fact the joke is on us: The Masters have discovered our weakness and have found a way to exploit it. A long and daunting struggle lies ahead.

An explosion of noise woke me. It sounded as if a dozen express trains were about to hit the shed. I rolled over in my blanket, trying to get out of the way, and was aware of a blaze of orange, lighting up boxes and bits of old farm equipment and tackle. An ancient rusting tractor looked briefly like an overgrown insect.

“What was that, Laurie?” Andy asked. I could see him sitting up, between me and the window.

Both light and sound faded and died. A dog started barking—deep-throated, a Labrador maybe. I got up and walked to the window, banging my shin on something in the dark. It was dark outside, too, moon and stars hidden by cloud. A light came on in the farmhouse, which was a couple of hundred meters away, just below the ridge.

“Didn’t someone at the camp say something about an artillery range on the moor?”

“Nowhere near here, though.”

“Whatever they were firing could have gone astray.”

Rubbing my shin, I said, “It didn’t sound like a shell. And a shell wouldn’t produce fireworks like that.”

“A rocket, maybe.” He yawned loudly. “It’s all quiet now, anyway. No sweat. Go to sleep. We’ve a long trek in the morning.”

I stood by the window for a while. Eventually the light in the house went out: the farmer presumably took the same view as Andy. In the pitch black I felt my way to the pile of straw which served as a bed. This was less fun than it had seemed the previous evening; there was little protection from the hardness of the earth floor, and once awake I knew all about the aches in my muscles.

Andy was already asleep. I blamed him for our being here—for volunteering us into the orienteering expedition in the first place, and then for insisting on a left fork which had taken us miles out of our way. It had looked as though we would have to spend the night on the moor, but we’d come across this isolated farm as dusk was thickening. The rules were not to ask for help, so we’d settled down in the shed.

I thought my aches, and resenting Andy, would keep me awake, but I was dead tired. We had set out
early from summer camp, and it had been a long day’s slog. Drifting into sleep again, I was half aware of another explosion, but it was a distant one, and I was too weary really to wake up—I couldn’t even be sure I wasn’t dreaming.

Andy woke me with the gray light of dawn filtering in. He said, “Listen.”

I struggled into wakefulness. The noise was coming from the direction of the farmhouse, but further away, a succession of loud thumpings, heavy and mechanical.

Listening more carefully, I didn’t either. The thumps came at intervals of a second or less, and they were getting nearer. There was even a sensation of the ground shaking under me.

“Something heading this way,” Andy said. “Something big, by the sound of it.”

We crowded together at the small window of the shed. The sun hadn’t risen, but to the east the farmhouse was outlined against a pearly sky. Smoke from a chimney rose almost straight: farmers were early risers. It looked like a good day for the trek back to camp. Then I saw what was coming into view on the other side of the house.

The top appeared first, an enormous gray-green hemispherical capsule, flat side down, which seemed
to be floating ponderously in midair. But it wasn’t floating: a weird stiltlike leg moved in a vast arc across the sky and planted itself just to the right of the farmhouse. As it crashed down a second leg appeared, passing over the house and landing between it and the shed. I could see a third leg, too, which if it followed suit would come to ground close to us, if not on top of us. But at that point, it stopped. The gigantic object, more than twenty meters high, stood straddling the house.

A band of bright green glassy panels ran horizontally along the side of the capsule. It produced an effect that was a cross between multiple staring eyes and a grinning mouth. It wasn’t a pleasant grin.