Read Why Don’t You Come for Me Online

Why Don’t You Come for Me 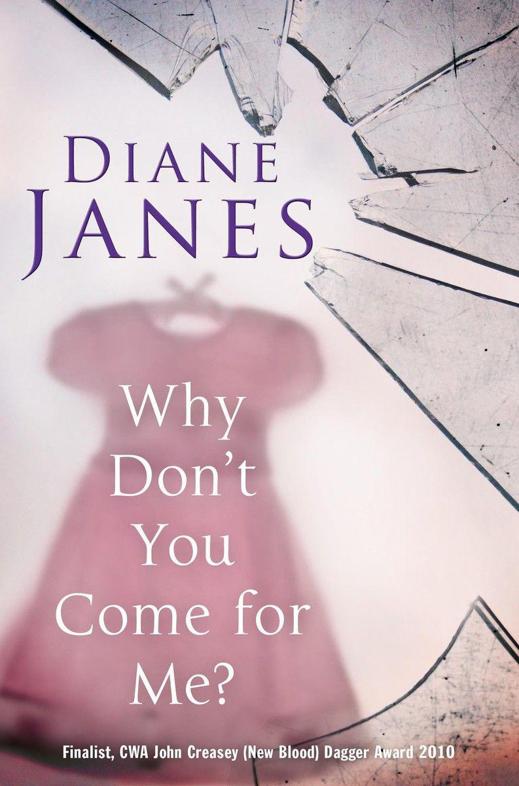 Why Don’t You Come For Me?

Harry half walked, half ran up the lane. All-out running made the torch beam swing wildly from side to side, but when he slowed down to see where he was going, the night-time sounds crowded in on him and his own footsteps echoed in mocking pursuit. When an owl hooted somewhere close by, he all but dropped the torch. It was the sort of thing his parents went on about all the time, these so-called joys of the countryside, banging on whenever they heard a woodpecker or sighted a deer, and going into ecstasies that time a badger scurried across the road. Every school holiday it was the same, coming up to ‘the cottage’ as they called it, when he would much rather stay in Heswall with his mates. If they had to have a second home, why couldn’t it be in the Algarve with a swimming pool, like his uncle John’s villa, instead of bloody Cumbria, where it rained nine days out of every ten? And if they had to come to Cumbria, then why not the touristy bit, rather than a miles-from-anywhere hamlet, with the stupid name of Easter Bridge, where there was
nothing to do
? At least you could hire rowing boats in Bowness Bay, but they hardly ever went anywhere like that. Bowness wasn’t ‘the
real
Lake District’, his dad said, although the shop selling thirty-six different flavours of ice cream seemed pretty darned real to Harry, and a damn sight more interesting than Easter Bridge, which consisted of fewer than a dozen houses, strung out along a little-frequented lane, which wasn’t even within a mile of a lake. Lake District – pah!

He thought it must be even worse for Sean, who was stuck here all the time, the only kid in the place when Harry and his younger sister Charlotte weren’t there. The parents had been really pleased when he told them that Sean had invited him round to play computer games. They seemed to imagine that it signalled some kind of rite of passage – acceptance by the locals – becoming part of the community. Their disappointment on learning that Sean’s family were incomers had been palpable.

Anyway, Sean’s company had been a godsend this half-term, getting him out of several boring walks, to say nothing of evenings playing Monopoly and Jenga en famille. It was quite a laugh hanging out with Sean, who had the new
Grand Theft Auto
, which Harry’s own parents had refused him on grounds of its violent content, but tonight had been their last night together, because after a week at the cottage it was time to go home.

It had been right at the end of the evening when Sean had come out with it. Harry had been sounding off about Easter Bridge, and how it must be the dullest place on earth, when Sean looked up from the shelf where he was taking out a DVD and asked, ‘What would you say if I told you there was a murderer living in Easter Bridge?’

Harry had restrained himself from the temptation to respond, ‘I’d say you were a dickhead, who is absolutely full of it,’ because, after all, Sean was not one of his mates from home, but still something of an unknown quantity. He was a recent acquaintance, and some eighteen months older than Harry, to say nothing of being his only lifeline from all those ‘Let’s-climb-Hellvelyn’ initiatives that his parents categorized as good clean family fun. So Harry had bitten back his instinctive response and said instead, ‘No. You’re kidding me?’ At which Sean just fixed him with a look which said he wasn’t.

‘How do you know?’ Now Harry stopped to think about it, that wasn’t the most obvious question.

‘Oh, I know. I’ve got proof. I’ll show you some time – maybe when you’re next up here. I don’t want to put anything on Hotmail. It’s not secure.’

‘We might not be coming back until the Easter holidays.’

‘Next time,’ said Sean. He turned back to the shelf containing the DVDs. It was a gesture of dismissal.

Harry knew he was being toyed with, but the digital clock already stood at 10.05 p.m. and his return time had been specified as 10 p.m. (It was a point of honour to be a little late – to demonstrate disregard, but not such outright disobedience that the parents could claim they had been worried about him.)

‘OK then. See you.’ Harry tried to make it sound as if he didn’t much care whether Sean told him more about this supposed murderer or not. But now he wondered as he hurried along – had Sean been winding him up? It was easy to imagine anything, out here in the dark, with the wind making the trees creak and sending whispers through last year’s dried-up beech leaves. Surely he must be bullshitting. A story to scare the kid up from the south?

Harry reached the gate of his parents’ cottage, almost wrenching it off in his hurry, then letting it go with a bang once he was safely through. If either of them said anything, he could say the wind caught it.

Jo looked up from her book when she heard Sean descending the stairs. ‘Has Harry gone?’ she called into the hall.

Sean appeared in the doorway, his expression contemptuous. ‘Didn’t you hear the door?’

Since she had obviously heard Sean on the stairs, it was pointless to deny that she had also heard Harry. She had intended the question to be the opening gambit in a friendly conversation; to afford Sean an opportunity to tell her something about what he and Harry had been getting up to in his room for hours on end, but the initiative had already stalled.

‘If you heard him go, why ask?’ His tone was unmistakably sarcastic.

She managed a reasonably neutral tone in return. ‘Please don’t be rude, Sean. I was only making conversation. It’s what normal people do.’

He shot straight back: ‘Are you saying I’m not normal?’

‘Of course not …’ She paused, about to add something else, but he stalked off in the direction of the kitchen, leaving Jo feeling that she had just lost another round of a contest in which she wanted no part. For a moment she considered following to remonstrate with him, but she decided to let it go.

‘It’s difficult being a stepmother,’ people had assured her. ‘You have to work things out gradually.’ She tried very hard, for Marcus’s sake, but in the six months since Sean had come to live with them, the relationship between herself and her stepson had not improved. Sean hardly spoke to her unless he had to, and she found the prolonged silences between them a strain. Sean had the ability to render silence hostile in a way she could not easily explain to Marcus, who appeared oblivious to it.

When she and Marcus first got together, there had been no suggestion that Sean might become part of the package. Marcus had been divorced for years, and although a model absent father, maintaining contact, sending presents, periodically appearing to provide trips and treats, he had never expected his son would want to live anywhere but with his ex-wife. All this had changed with the arrival of a new man in her life. ‘I don’t like him,’ Sean told his father. ‘Mum doesn’t have time for me any more, not now she’s expecting another baby. Why can’t I come and live with you?’

‘It won’t be for ever,’ Marcus had said to Jo. ‘He’s fourteen now. He’ll be eighteen and off to uni before we know it.’

She had assured him that she did not mind. She knew that with a partner came the baggage of their past relationships – and Marcus had always been the most understanding man in the world when it came to that. She had tried to make allowances for the fact that she and Sean hardly knew one another. She did everything she could think of to welcome him: spent money hand over fist redecorating his room, involving him, letting him choose whatever he wanted to have in it. She endeavoured to provide the food he liked at mealtimes, to be supportive when it came to starting his new school. She even covertly studied books about how to be a good step-parent, but none of the advice seemed to work. Was it just a teenage-boy thing? Maybe it was teenagers in general, she thought. Everyone said teenagers were difficult. Her only real experience of teenagers was being one herself, and that had been a long time ago.

She was not used to having teenagers – or even children in general – around. Her eyes strayed to the stainless-steel photo frame which stood in a prominent position on the pine dresser. A head-and-shoulders shot of a blonde toddler, snapped against a backdrop of garden flowers. A happy little face, looking straight into the camera. Lauren’s smiling eyes met hers. ‘I love you, Mummy,’ they said.

Sometimes Lauren reproached her in dreams.
Where are you? Why don’t you come for me?
Sometimes, even now – getting on for nine years after it happened, Jo would still wake suddenly, thinking she heard a child’s cry. For a split second the wind in the trees outside the bedroom window would sound like the sea as it surged up the shingle beach and Jo would picture the buggy, suspended among the brambles which grew on a rocky outcrop, a dozen or so feet below the cliff top. Sometimes she called out, clutching at the empty air beyond the bedclothes, imagining she saw the child, falling, falling, tumbling head over heels in a long, slow-motion descent past the off-white chalk: the tiny figure in its scarlet t-shirt and sky-blue dungarees, bright against the dull backdrop like a splash of paint flung at a prepared canvas. She always woke before Lauren hit the ground. Shuddering in the darkness, Jo would remind herself that Lauren had not plummeted to her death. Nothing had been recovered from among the smooth, clean stones. There had been no sign of a child’s body. The summer tides never reached the foot of the cliffs. Only the empty pushchair had been found, crazily tilted among the bushes, leaning at an angle potent with false suggestion.

There had been pictures of the empty pushchair in many of the papers, photographs taken from far below with a telescopic lens. One appeared under the headline
WHERE IS BABY LAUREN
? It was the question everyone had asked a million times. Lauren – where was Lauren? At each of the news conferences, Jo had vowed to go on searching. ‘I will never give up hope.’

‘Never give up.’ She had spoken those words a thousand times – sometimes standing in Lauren’s empty bedroom, where only a gaggle of abandoned toys remained to hear her. But never is a very long time. Someone else occupied the bedroom now. Someone else played in the pocket-handkerchief garden, where Lauren had taken her first faltering steps.

On the day when the toys were finally packaged up, that room, that house vacated, Jo had comforted herself with the thought that Lauren would be far too old for those things now. She would need new toys when she came home, toys more appropriate to her age group. Other people tiptoed around the issue of the baby toys, saying – if they spoke of it at all – that this long-overdue act of disposal was a positive step, a way of moving forward. They didn’t seem to understand that moving forward inevitably meant leaving something – or someone – behind. As the timescale lengthened until it was reckoned in years, Jo did sometimes forget. Gradually she had learned that respite
could
only be found in forgetting.