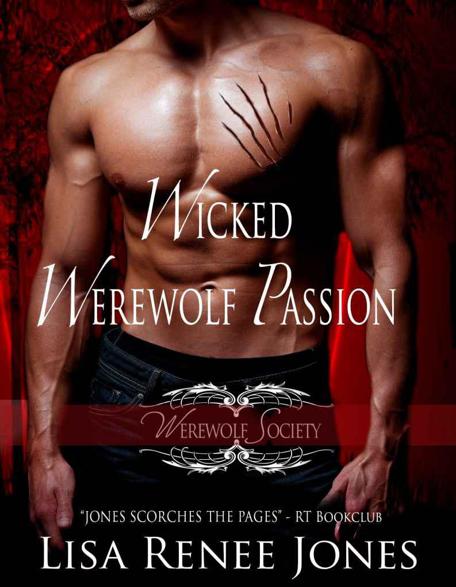 A stand alone story. You don’t have to have read the other stories to enjoy this one!

*The Vampire Wardens is in the same world, and is a connected series*

To obtain permission to excerpt portions of the text, please contact the author at
[email protected]

This ebook is licensed for your personal enjoyment only. This ebook may not be re-sold or given away to other people. If you would like to share this book with another person, please purchase an additional copy for each person you share it with. If you are reading this book and did not purchase it, or it was not purchased for your use only, then you should return to e-taler and purchase your own copy. Thank you for respecting the author's work.

Carmen Neal, daughter to one of The Werewolf Council’s leaders, was fighting mad. The source of her anger was the wolf standing in front of her in the training facility of the secret headquarters of The Werewolf Society housed inside Vegas’ ‘Hotel Italy’, her personal bodyguard for the past six months.

She circled him on the mat, and he didn’t move. He just watched her with those wickedly sexy green eyes of his and waited for her to attack. Damn Shi McKnight, he might be six feet four inches of hot alpha male, with long raven hair streaked with the most unique red she’d ever seen in her life, and he might even be the hottest man she’d ever seen, but he was such a hard-ass. He pushed her too hard and she reacted. She pushed him hard and he didn’t. She was tired of being pushed and she was damn tired of him not reacting.

Carmen threw a punch and he caught her wrist. She drew the silver and gold blade in her ankle boot he’d given her on their first day in the gym three months before but didn’t manage more. He twisted her around so that her back was to his front. His body, hot and hard, surrounded her. “You can’t fight with your emotions or you’ll die.”

“What do you expect me to do, Shi?” she demanded. Her mother had had her throat ripped out by a bloodlust infected vampire seeking the high werewolf blood delivered. Her father would have died too if not for the magic of a witches coven aiding The Society, and she wasn’t sure he wasn’t better off dead in his present state. She squeezed her eyes shut, her voice lowering to a whisper. “What do you expect me to do?”

Sweetheart.
He used endearments when they were alone. He looked at her like he wanted to gobble her up. He left the room in moments and she knew he was trying to control himself. And yet, he never acted on what was between them. For three of the six months since magic had saved her father and pain had driven him insane, and she’d come back to this world thanks to Shi, they’d played this damn game of hot and cold. She couldn’t take it anymore. “Damn you, Shi, don’t call me sweetheart unless you’re finally going to do something about us.”

She felt his body tense and he buried his face in her neck. “You know why I can’t.”

She twisted in his arms and let the blade fall to the ground, her fingers curling on his chest.“Damn the council, the Guard and their rules, Shi. You know me like no one else.” He’d lost his family to rogues as well and while it might have been nearly a century before, he still lived the pain. She saw it in him, and he understood it in her. “You want me and I want you.”

He took a step backwards and for once, she went with him. “Don’t keep doing this. Please.”

“I couldn’t have made it through the past few months without you, Shi.” He was the one who’d gotten her out of bed when she didn’t think it was possible. He was the one who’d shared nearly every meal with her since, who’d convinced her a month before to go to her job as the PR rep for the seven hotels The Society used as a cover-up operation. “I need you. I need us.”

His eyes softened. “You’re stronger than you give yourself credit for.”

“I’m stronger because you held me up.” And he had. He was such a loner, but he’d opened up to her – slowly but surely.Told her about his family, his life. They wanted each other.They needed each other, and still he held back.“What are we doing, Shi?”

“A Guardsman does not get personally involved with someone he protects, let alone a council member’s family. It’s a matter of honor and a Court Marshall offense.”

“I’m not letting anyone else protect you.”

“You can still protect me.I can protect me thanks to you.”

A turbulent look slid across his handsome face. “We still can’t be, Carmen. The council, the Guard, your father, will assume we started something before my departure.”

She’d come this far, dared to push him this boldly and she wasn’t stopping now. “And when I reach twenty-three next year? When I hit ‘The Day of the Wolf’?” It was when a female of their race stopped aging for fifty years, but more importantly, when she became fertile with her mate, if she was lucky enough to find that rare match. But she was that lucky, because she knew in her heart, this man was her mate.

His eyes heated, and the green took on an amber glow. He felt it, too. He knew what she did. She was his mate. It was the only explanation for how intensely they wanted each other.“Then,” he said, a deep rasp to his voice,“no one can keep you from your mate.”

This shocked her and ripped at her in a way that neared physical pain. It didn’t matter. There could be more than one match until a bond was complete unless he loved her...unless...  “But you aren’t mated.” Otherwise, he wouldn’t want her. He’d only want his mate.

“She was a Rebel who tried to kill me.” His jaw tightened. “Instead, I killed her.”

She was appalled, and not because he’d killed her. Rebels were vicious monsters who fed on flesh and death. Good Lord, his life had been filled with horrific pain. “Did you...think you cared for her before....it happened?”

“Of course not. Who would? That would be a curse.”

“Even if she hadn’t been a Rebel, I didn’t want to care about anyone enough to feel their loss ever again.”

She wet her lips, and his gaze followed the movement. “After what I’ve been through, I can’t say I blame you.” She hesitated. “But it happened to me anyway.” Her chest tightened. “You have come to mean so much to me, Shi.”

They stared at one another, and she could feel him everywhere, inside and out. Her skin was on fire. Her heart was thundering. Suddenly, he growled low in his throat and she was whirled around and pressed to the wall. “I didn’t want to give a damn.”

“But you do,” she whispered. “Tell me you do. I really need to hear you say it.”

“Too damn much.” And then, he was kissing her, his mouth slanting over hers, his tongue pressed between her lips.

Carmen moaned with the sweet bliss of it, her arms wrapping around his neck. She pressed into him, unable to get close enough, incapable of getting enough of him. This was what she needed. He was what she needed. She was lost in this man and she wanted to be lost in him forever. Here she was safe. Here she belonged. Here she felt no pain. Suddenly though, Shi pulled away. Shoved back from her and put space between them. Carmen was panting, trying to breathe when the door of the training room opened and her father walked in.

A gasp slid from her lips as the rush of her father’s anger washed over her. Alexander Neal was six feet five, with long blond hair, and though he looked not a day over thirty-five, was two hundred years old. His presence, even in his current state of barely normal, was intense, but add anger to the mix, and it was suffocating.

“What the fuck is going on?”

Carmen didn’t look at Shi. She just acted, knowing that though Shi could mask the scent of his desire, she could not. Her father would know she wanted Shi and in his unstable condition, barely out of the hospital, she wasn’t sure how he’d react.

“Training, father,” Carmen said quickly, noting the odd blue hue of his eyes that said the magic they swore was out of his system wasn’t and it scared her. “We were just-”

Her father started to laugh hysterically, an insane quality to his voice. Carmen blinked in shock and looked desperately at Shi, whose hand was on the blade at his waist. “Go get the doctor, Carmen,” he ordered, without looking at her.

A second later, her father launched himself at Shi. Carmen screamed and took off for the hall, shouting for help, until she watched Nico Moore, the leader of the Royal Guard, and several other wolves, rush forward. She turned back to find Nico and her father rolling around on the ground, in vicious battle.

It was after sunset when Shi stopped at the door of The Benedanti bar inside ‘Hotel Italy’, and instantly he knew she was there.  He knew by the sweet spicy scent of wolf and woman. He knew by the way his skin prickled and his blood burned in his veins. Leaving had killed him, and each day away had eaten him alive, but it was the only way to be sure there could come a day when he could be with Carmen. And he would be. She was his mate. He knew it with every part of himself. Still, he’d tried to convince himself that time and distance would change the way she made him burn. He didn’t want to care about her. He didn’t want to fear for her. He didn’t want to find out he’d been destined for a mate who was a Rebel and fallen in love with a woman he could never have. But there was no escaping what he felt. Just being in the same building as her and he was on fire, burning up with need.

“Long time no see, man,” the doorman, Lucas Smith, was a tall, burly dark haired wolf who ensured the humans on the other side of the hotel didn’t make it inside the VIP location. VIP because, unknown to the humans that frequented the casino, it catered to the wolves they didn’t know existed, most especially the Royal Guard who protected their council. Lucan arched a brow. “Where ya been? I thought you Guardsmen stayed close to the council and kept them all warm and fuzzy and safe.”

“My warm and fuzzy skills needed recharging and like you give a shit anyway.”