Read Will to Love Online 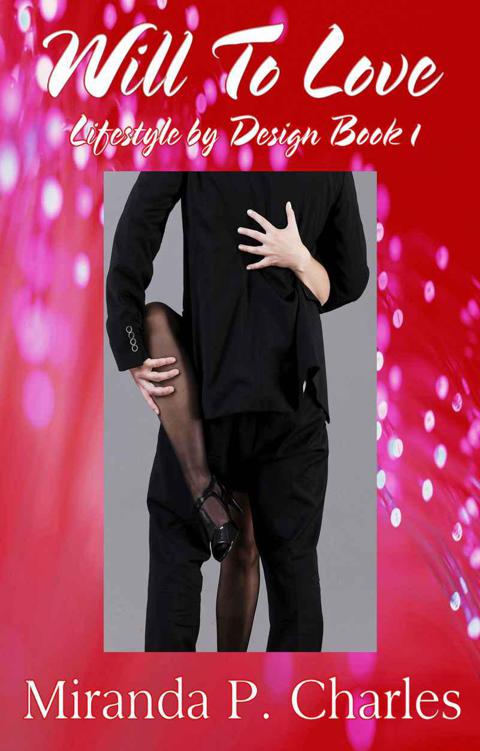 All of the characters, locations, organisations and events described in this novel are either products of the author's imagination, fictitious or are used fictitiously.

Any resemblance to any event, locale or person, living or dead, is purely coincidental.

To my husband, I love you very much.

Thank you for making this possible.

Victor will be there with me, looking his usual gorgeous self.

He assured me he'll be very attentive.

Everyone will see how mad we are for each other.

Surely, this would work.

It should stop my dear sister from going ahead with her matchmaking plans.

If it doesn't, well, plan B is to die from embarrassment.

It will work
, Clarise Carson thought confidently before taking a deep sigh and focusing back on her last piece of work before she ended the working day.

After a final review, she was done with her latest article for Lifestyle by Design magazine, the popular, monthly magazine read by those with loads of disposable income keen to know which restaurants and bars are worth going to, which exotic destination they could holiday on next and what new gadgets they must own to make their busy lives easier.

She was still salivating at the memory of the glorious food she had at Stillwaters Restaurant, the newest restaurant in Sydney by an upcoming Australian chef, and the latest establishment she had researched and reviewed.

The atmosphere and the service completed the wonderful dining experience.

They definitely deserve this glowing article.

She knew the new restaurant will soon have a very long waiting list of patrons wanting to dine there once the magazine hit the stands.

Feeling satisfied with her day's accomplishments, she shut off her laptop, grabbed her handbag and walked into the office of Victor Michaels, the magazine's very good looking head graphic designer.

Are you ready to go?

I'm starving," she said to Victor.

"I'd also like to talk to you again about Megan's engagement party this Saturday night.

Seriously if you can't go with me, I don't know who else to ask," Clarise said, voicing her worry.

"Just give me five minutes and I'll be ready to go.

And of course, I'm going with you, darling," Victor replies to her with a grin.

"I'm really excited about it.

And, I'm already looking forward to meeting your family and showing them just how much I want you."

He said this in a very low, sexy voice that, if it wasn't Victor saying it, she would have blushed.

Instead she laughed and settled herself on Victor's visitor's chair and waited for him to finish.

Renewed confidence flowed through her.

Having Victor for her date would hopefully stop Megan's plan to introduce her to the single men who'd be at her and Rick's engagement party.

Who knew how many single men they had invited.

And it was supposed to be a small party only!

She shuddered at the thought of

being introduced to a line-up of bachelors, with everyone at the party knowing what was going on.

I wouldn't make a spectacle of myself even though Megan thinks she's only doing me a favour.

She guessed the reason why Megan was so intent on playing matchmaker.

Their mum must be in on it.

Both her mum and sister must have felt sorry for her when she broke up with Daniel, especially when she asked her mum if she'd ever meet 'The One' for her.

Megan's plans made her feel pitied and she didn't want pity from anyone.

She still had her pride.

She could still remember her conversation with her mum.

"Don't worry, darling, maybe Daniel's not really for you.

Sometime soon, you'll find the one who's really meant for you," her mum had said to her soothingly.

Clara Carson was a true romantic.

"Do you really think I'll ever find 'The One', mum?

You know, like you have dad and Megan has Rick?" she asked her mother pathetically over the telephone.

"But of course, you will, darling!

You are gorgeous and you are beautiful on the inside too.

Somewhere out there, there's a man just for you.

And you know I'm not just saying that because I'm your mother," Clara fervently tells her daughter.

"But you won't find each other if you don't go out enough!

You know don't meet enough single men because you don't socialise much, darling.

Most of your people contacts are work related and you have such strict rules about not dating anyone work-related.

You should go out more."

That was not the first time her mum had encouraged her to 'go out more'.

Clara hadn't hidden the fact that she was worried her eldest daughter will end up a spinster and have no one to share her life with.

With her track record of hardly going out on dates, and when she did, her relationships not lasting past two and a half months - her time with Daniel being the longest - she shared her mum's concerns.

She ruefully remembered the time when she and Daniel took her parents out to dinner so Daniel could meet them for the first time.

Her mum was so excited it was like she herself was going out on her first date. She was sure her dad was excited too although he was his usually reserved self and didn't fuss on Daniel like her mum did.

Daniel was the first boyfriend she had ever introduced to them.

After twenty-nine years, Clarise Carson had finally brought a boyfriend to meet her parents.

Three weeks after that, she was single again.

She felt like she had failed at something significant and swallowed the pain and guilt that attacked her at disappointing her parents - and herself.

"Are you ok, Clarise?" Victor's voice brought her back into the now.

"Yes, just thinking of Megan's plan to foist single men on me at the party after mum told her I'm looking for 'The One'.

I don't want to look desperate!

How embarrassing would that be?"

Clarise shook her head again and looked at the handsome face in front of her.

She couldn't help but think that it was, indeed, very unfortunate for the female population that Victor was gay.

He was really hot-looking and a decent guy to boot.

"I'm so looking forward to your sister's engagement party but I seriously hope there are no handsome, muscular hunks there or I wouldn't be able to keep up our pretence."

They both laughed out loud.

Victor got out of the car, looking gorgeous in his light gray, long-sleeved, collared shirt and black pants.

He went to the passenger side to open Clarise's door.

Clarise got out of the car, wearing a chic blue silk dress that hugged her figure in all the right places.

Together, they looked a beautiful couple.

"Thank you, darling," Clarise murmured to Victor as she stood up beside him, her eyes dancing with controlled laughter at she watched him act out their game.

"What is your mantra again today?" she teased him.

"I'm a sexy, handsome straight man who's crazy about you," he whispered.

"Don't make me laugh out loud though or we'll give the game away!" he said with a snicker.

They were fully aware that Clarise's parents were watching them, having just got out of their car themselves.

Clarise's phone call with Megan two days ago played out in her head.

She told her sister she was bringing a date after all.

"Is this your new boyfriend?" she had asked her.

"I work with Victor, and we, umm, get along really well and we really like each other," she had answered.

Well that's not a lie.

"There's the complication of working together but we seem to be managing it quite well.

I'm really looking forward to introducing him to you guys at your party."

She tried to sound mysterious, wanting to make her sister believe there was something romantic between her and Victor.

And she knew Megan would have told their mum straight away about Clarise having a new boyfriend.

And right now, as she and Victor walked hand-in-hand toward her parents, she could tell her mum was sizing him up.

Her dad, too, although as a man of few words, Clarise knew he wouldn't say much to her about Victor tonight.

Clarise made the necessary introductions and they all walked towards Rick's parents' house where the engagement party was being held.

Her mum pulled her so she was walking beside her and whispered, "Well, he's better looking than Daniel, sweetheart.

Clarise smiled with relief that her mum was believing this little charade.

Her mum noticed and interpreted Clarise's smile as relief that she approved of her new boyfriend.

The Smithson's house was in party mode.

There was a large marquee at their manicured backyard, decked out with gold, silver and light pink balloons with a small dance floor towards one side and a sumptuous buffet and tables for the guests on the other side.

Clarise marvelled at the number of guests invited.

For what was supposed to be a small party for family and close friends only, there were still around fifty place settings.

She knew Megan worried about the friends she couldn't invite and that she had to be ruthless with her guest list for tonight.

Both Megan and Rick didn't want this to be a "big" affair.

They wanted their wedding to be the big one, the special one.

Clarise nervously thought of the single men that were supposed to be there tonight and didn't want to think how many Megan had invited.

Not many, she hoped, feeling guilty.

She should have thought of the charade with Victor much earlier, before Megan could invite the single men who wouldn't have been invited were it not for Megan wanting her to meet them.

She caught sight of her sister, radiant and beautiful with Rick beside her, already talking to their parents.

Clarise smiled and felt a warm glow in her heart with seeing her younger sister so happy.

With only fifteen months separating them, the two sisters shared a very close bond.