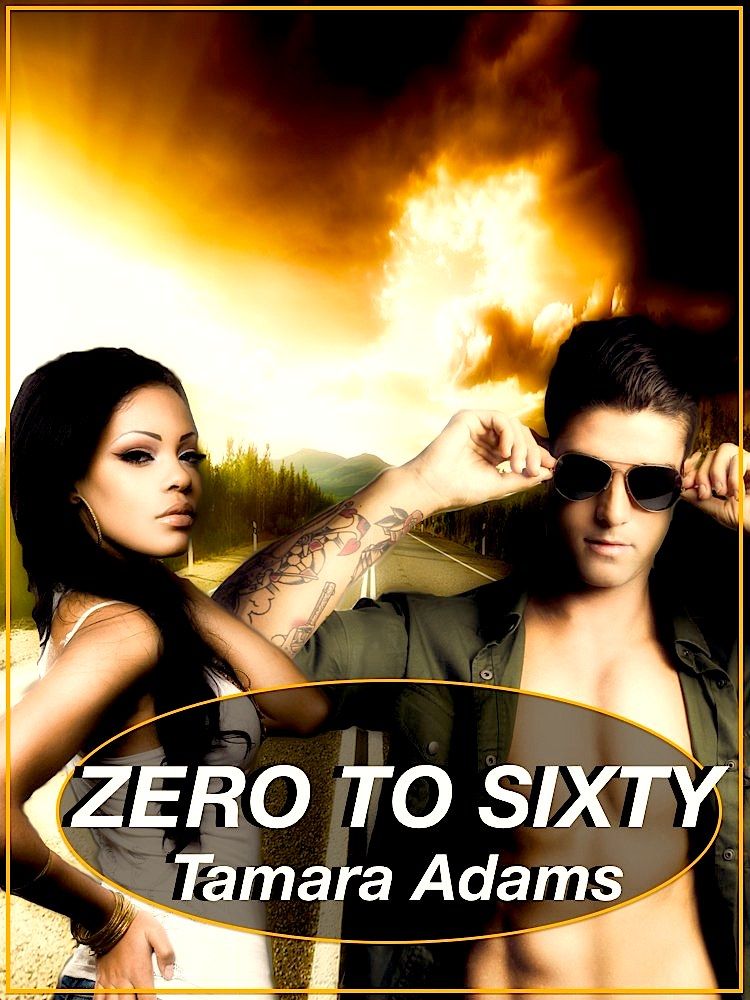 A note to my readers:

I have been listening. With each story I write, I find a need to go deeper, to uncover more of the secret longings and fears, the insecurities that plague us all when it comes to love. I've also found a need to explore more of the characters inner and outer life.

This time I explore a world that my husband finds fascinating: professional car racing. It's a fast and dangerous world and then men who dominate it are their own special breed. Fearless, strong and rough around the edges. I wanted to take my prim and proper heroine out of her comfort zone and challenge both these characters with seeing things from a new perspective. To me, these characters jumped off the page, demanding that I write their story. I am especially proud of this, my ninth book.

Please continue to share your experiences as a reader with me. I find it invaluable as I continue to learn and grow as an author.

I hope you enjoy
Zero To Sixty
as much as I enjoyed writing it.

Denise rolled over and stared at the clock. It was six AM on Saturday. She didn't set an alarm on Saturday. In fact, her phone volume was off. Except for one thing…

She groaned and reached for her phone.

It was on the new side table in her newly decorated room in her brand new house. Well, technically it was a townhouse condo on the edge of Beverly Hills. But it was a very nice townhouse condo.

And it was hers.

Every penny she'd ever earned was in this place and she loved it. Even if it was a little bland. She looked around, wondering what had possessed her to decorate with so much beige. Where were the purples and peaches she loved so much as a child?

Besides, it's not like she was ever home. She'd been out of business school for exactly eighteen months, and in that time she'd climbed the corporate ladder steadily. Mostly due to extreme diligence and hard work.

Luck had nothing to do with it.

On Friday she'd been given a new assignment. Her first solo account. One of the last things she'd done for the weekend was set up an alert on her phone. It was to ping her every time her new assignment made an appearance in the press.

Her phone was beeping madly.

She pushed her eye mask up and over her head, rolling to her stomach. She was so tired that her eyes refused to adjust immediately. She squinted at her phone, seeing a ticker tape of Ansel Philips news blasts.

Literally every gossip site, every channel, every news outlet had the story.

Why was she not surprised?

Annoyed, yes. But not surprised. Not even a little.

Denise had studied the folder on Ansel Philips last night after cooking herself a light dinner. It was a thick folder. More like a phone book really. But fascinating. She'd read it until she was finished, well after midnight. Born dirt poor in the black hills of West Virginia and orphaned young, Ansel was raised by his grandmother who'd apparently been tough as nails. The woman had single handedly dug out an old mine on their property and found coal.

With the modest fortune she'd found, she'd funded her only grandson's dream: to race cars. Ansel had been fifteen when he'd started, entering local races with a forged ID and a car cobbled together with discards found at junk yards. But he'd had something.

That was putting it mildly.

The man oozed charisma. He was dynamic. Arrogant. Gorgeous.

From the beginning, Ansel had attracted attention. Not just because he could drive, and God knows he could. But because of his bad boy antics, drinking, smoking, fighting, gambling and womanizing. And that was only the stuff that was printable. Rumors had it, he was up to far more.

All this made him the perfect spokesman for Black House Whiskey. He practically screamed All American Bad Ass. Actually, that wasn't a bad tag line. She'd have to remember to jot that down.

After
she'd had her coffee.

She sighed and thumbed through the articles. Each one had a different picture of Ansel. Lord knows he was photogenic. Naturally tall for a driver, he was muscular and lean. He was sun baked and whiskey cured. His famous baby blue eyes were far too pretty for a man, as were those sensual lips. The rest of him though, was hard and craggy.

He was one hundred and fifty percent man.

Not to mention a major pain in the ass.

Denise didn't usually curse but her new assignment was not off to a good start. Contrary to popular belief, not all press was good press. Anything illegal would create issues for the brand. It was hard enough to get actual liquor advertising these days as it was.

She knew she was going to have to call her new show pony at some point and have a talk with him. She rolled out of bed and put on a pot of coffee. There went the start of her plan to catch up on sleep this weekend.

There was no way she was going back to bed now.

Denise pulled on her running shorts and stretched while her coffee brewed. Then she texted Sasha to cancel lunch. She saw her best friend maybe once a month but they were in constant contact otherwise. Still, she knew Sasha would not be pleased that she was canceling again.

But it couldn't be helped- she had to work. If Sasha gave her a hard time, she could always blame Ansel. It
was
his fault after all.

She poured some coffee into a travel mug and hit the streets of Los Angeles.

Ansel groaned, shielding his eyes from the harsh fluorescent lights above. His head ached, his back ached, hell, his whole body ached. It wasn't an unfamiliar feeling, being hungover, but this one was particularly bad.

Plus whatever he was lying on was hard as a rock.

And the strong smell of disinfectant was making his stomach do back flips.              He squinted, looking around the square room he was in. Cement, industrial lighting, a toilet and bars. It was all too familiar.

Damn it all to hell.

He was in jail.

The drunk tank from the looks of the cell's other inhabitants.

He sat up, resting his head in his hands.

A young cop was standing on the other side of the bars. Ansel lifted his hand weakly, too woozy to do anything else. The cop waved him over, doing a double take as Ansel staggered toward the bars.

"Wait a minute- are you
the
Ansel Philips?"

"No shit! My kid's a huge fan. Can you autograph something for me."

"If you get me a cup of coffee, I will sign anything you want."

"Sure, you got it. Oh and your girlfriend is posting bail now. Whooo-eeee! You are a lucky man my friend."

But the cop was gone. Hopefully bringing back an industrial sized coffee.

One thing he knew for sure was that whoever was bailing him out was definitely not his girlfriend.

Ansel did not believe in relationships. He loved women. Often. Just not for very long.

The cop was back with the coffee in a few minutes. He'd also found a magazine with Ansel on the cover. He signed it, silently thanking his lucky stars that it was a racing mag and not another damn tabloid. He hated those garbage mags. They always upset his Grannie.

The cop laughed and slapped his knee.

"You got that many girls running around?"

Ansel shrugged. He did have a lot of girls. But very few repeat customers. In fact, zero of them.

"She's a dime man. Perfect ten. Classy looking too. Like I said, you are a very lucky man."

The coffee was empty by the time they led him out. He collected his personal possessions. One pair of aviator sunglasses. One phone, with about fifty missed calls and texts. And one almost entirely empty bottle of bourbon.

Well, that explained the headache.

Ansel walked out to the waiting room to meet the mystery woman who had bailed him out.

He slid his sunglasses on in the nick of time. He definitely did not want anyone to see the expression on his face at this moment. His eyes, bloodshot as they were, were wide open with surprise.

Shock made him stop in his tracks. Shock and something more visceral. Pure, unadulterated lust shot through him, heading straight to his gut.

He nodded, not sure if his mind was playing tricks on him. He was looking at one of the best looking women he'd ever laid eyes on. No,
the
best.

And he'd laid eyes on a thousand hot chicks in his day. Hell, more than his eyes. His whole body, usually.

Only trouble was, he was seeing two of her.

Long dark hair, a heart shaped face with huge doe eyes and the softest, poutiest, sexiest lips he'd seen in his life. And that body- damn! The girl would put a victoria's secret model to shame. Long, lean and curvy as hell.

Good Lord the girl was stacked!

He smiled at her, wondering if he'd already bagged her. No- he would have remembered. Besides, he'd never been with a black girl before. Every other kind of woman under the sun, yes, but this would be a first time.

He couldn't wait, hungover or not. His cock was already starting to pulse with blood. That was alright though.

Better his dick than his head.

She stood and held out an elegantly manicured hand.

Well, that explained it. She was here to chastise him. Damnit. And he was so looking forward to taking her to bed. Or, anywhere for that matter.

Hell, he'd do her up against a wall and praise Jesus for it.

"Can we go somewhere to talk? You look like you could use some breakfast."

"Sure. What time is it anyway?"

She gave him a look that reminded him of his Sunday School teacher.

All that mattered was that she ended up beneath him. And that he wiped that disapproving look off her face. He grinned at her and held open the door.