Read A Game of Thrones Online

A Game of Thrones 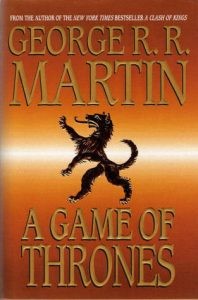 I liked the moral ambiguity, the realism and the gloominess – very early into the story you really get to feel the ominous Stark words “Winter is coming.”

Nevertheless, I found it quite hard to like the book at first and struggled with a number of issues.

– Why is the world so full of fifteen years old wenches and swordsmen? This may be historically accurate but not exactly appealing, especially given the

graphic nature of violent and sexual scenes in the book (eg. the semi-rape of Daenerys, aged 13). I mentally added three years to the age of every character

in the book and it came out all right.

– It is hard to care about the Starks! Ned Stark is a colossal fool and a walking corpse the moment he sets foot in King’s Landing. His lady wife is only

marginally better, shifting between paralysis and rash action that will obviously plunge the kingdom into war. Sansa is bland – the best the reader can feel

for her is pity, given Martin’s fondness for doing ugly things to little girls, you have to wonder who’s going to rape her first and when. Robb’s alright, but

the way things are moving, he will probably end up on a Lannister spear in the beginning of book 2…

– Then there is the sheer implausibility of certain critical events:

— The king is a worthless bum and considering the level of treachery of the court it is no small wonder he is still alive. His only purpose in the book is to

die, dooming Ned Stark and sparking off a war. Still, Tyrion has been kidnapped, Starks and Lannisters are fighting in the streets of King’s Landing, his

Hand has been wounded. Anyone with half a brain can see that a war is coming. What does the king do? Go on a hunt. Bum or not, no one is THAT stupid.

— What happened to Daenerys? There was a thirteen years old girl dreaming of lemon trees and a childhood she never had. A year and a couple of rapes

from her horselord of a husband later, she apparently loves him, promises men they’ll die screaming and sets out to retake what is “hers” with fire and

steel. I did not find her very believable.

— There is a number of strange inconsistencies in the characters. Some of it may be excusable, some much harder to accept. Ned Stark for example is

supposed to be this paragon of justice, honor, duty and doing the “right thing.” And then we see him send a hundred armored knights to lop off Ser

Gregor’s head with the sole weight of evidence of his guilt being that some big guy was seen among the raiders in the riverlands. Justice indeed.

Despite all its shortcomings, the plot is intricate and compelling and there is a number of very interesting characters – Tyrion Lannister and Arya Stark

being the standout stars. I’ll certainly read the rest of the series, at least as long as these two are kept alive.