Read 03_A Family To Call Her Own Online

03_A Family To Call Her Own 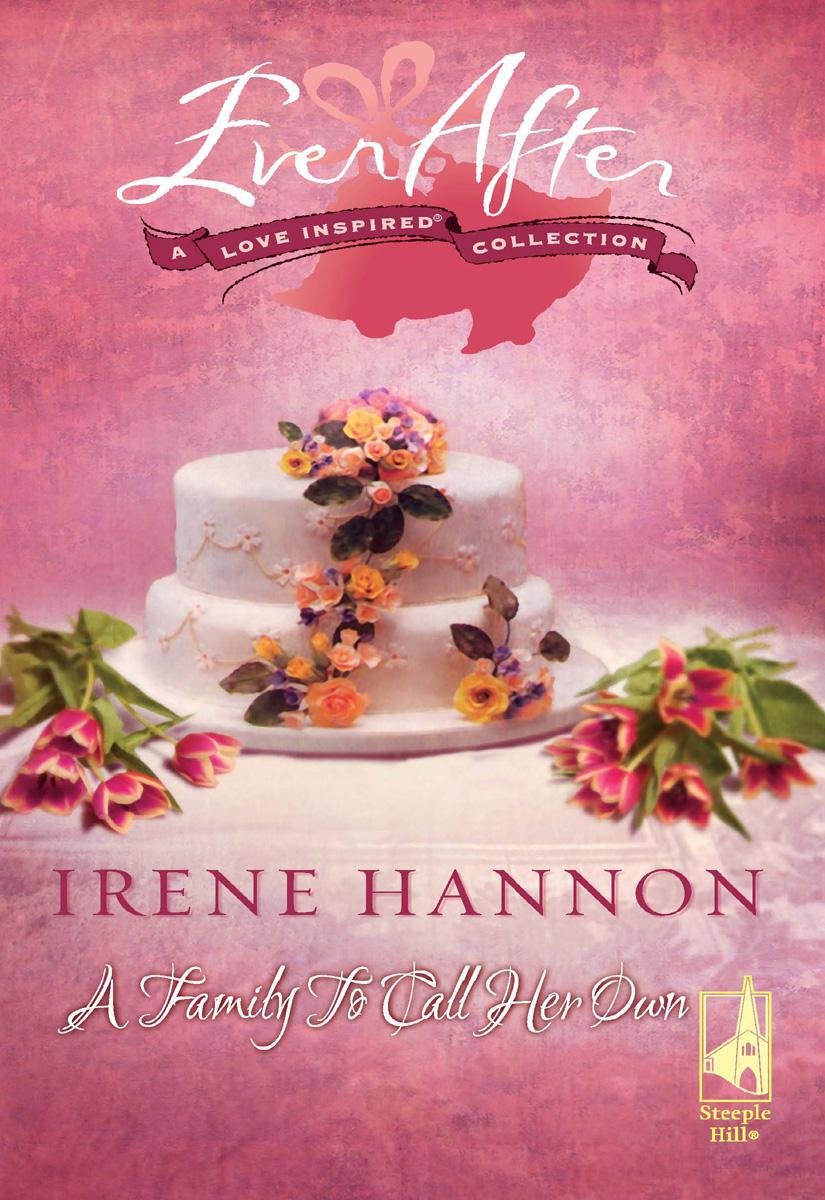 As Rebecca drove carefully through the swirling fog, she stole a glance at her unconscious and unexpected passenger….

Although his color was ashen, his clothes stained and rumpled, she could tell that he was handsome in a rugged sort of way. His strong profile and jaw seemed to speak of character and integrity. Yet there was a worn look about his face—a sort of deep weariness that had nothing to do with his injuries. For some reason Rebecca had the impression that he was a man who had seen it all and now viewed the world with cynicism.

Rebecca’s gaze snapped back to the road. She was letting herself get way too fanciful. Looks could be deceiving. She knew that from experience. In a few minutes she’d leave him at the hospital and probably never see this man again.

But oddly enough, the thought didn’t give her much comfort….

is an award-winning author who has been a writer for as long as she can remember. She “officially” launched her career at the age of ten, when she was one of the winners in a “complete-the-story” contest conducted by a national children’s magazine. More recently, Irene won the coveted RITA
®
Award for her 2002 Love Inspired book,
Never Say Goodbye.
Irene, who spent many years in an executive corporate communications position with a Fortune 500 company, now devotes herself full-time to her writing career. In her “spare” time, she enjoys performing in community musical theater productions, singing in the church choir, gardening, cooking and spending time with family and friends. She and her husband, Tom—whom she describes as “my own romantic hero”—make their home in Missouri.

A Family To Call Her Own

Anyone who welcomes one little child like this in my name welcomes me.

To Dorothy Hannon,
my wonderful mother and cherished friend, who gave me Isabel.

“T
hat’s a lie!” Zach Wright shot to his feet and glared at the managing editor, bristling with rage. He leaned on the desk that separated them, palms flat, eyes flashing. “That’s a lie!” he repeated furiously.

“I’m sure it is,” Ted Larsen replied calmly, not at all intimidated by Zach’s threatening posture. “But are you willing to reveal your sources to prove it isn’t?”

Ted shrugged. “Then we’ve got to play it their way. For now.”

“Why?” Zach demanded hotly. “I’m telling you, this information is solid. I wouldn’t use it if it wasn’t.”

“I know that,” Ted conceded. “But Simmons is getting pressure on this—big-time. They’re threatening to sue.”

“It’s just a scare tactic,” Zach retorted scornfully, waving the excuse aside dismissively with an impatient gesture. “My information is good.”

“You’re probably right about the scare tactic. But it worked. For the moment, anyway. It’s not easy being a lucrative publisher in this day and age, Zach. You know that. Simmons is just being cautious.”

Zach gave a snort of disgust. “I can think of a better word for it.”

“Look, we’ll work this out. I know your information isn’t falsified. We just have to prove it.” Ted paused, as if carefully weighing his next words, anticipating the reaction. “And until we do, we’re going to kill the series.”

With a muttered oath, Zach turned away in frustration, jamming his hands into his pockets as he strode over to the window and stared out at the city streets. St. Louis could be a beautiful city, he thought. But on this dreary February day it was just plain ugly—the same as his mood. This whole experience was leaving a decidedly bad taste in his mouth. “Whatever happened to printing the truth?” he asked bitterly. “I thought that was our job.”

“It is,” Ted acknowledged. “But Simmons’s job is to keep the paper solvent. He’s not willing to risk a lawsuit.”

“So we just let them get away with it?” He turned back to face the editor, his eyes still blazing. “Ted, the corruption in that office is rampant—misuse of public funds, a rigged bidding process based on nepotism instead of price, blatant bribery—what am I supposed to do, forget about it?”

“No. Just lie low for a while. In fact, why don’t you take some time off? How many weeks have you accumulated, anyway? Five, six?”

“When was the last time you took a real vacation?”

“I don’t want to take a vacation!” Zach snapped. “I’m not running away from this story, Ted! I’ll stand behind my coverage even if the paper won’t!”

“We’re not asking you to run away,” Ted replied evenly. “Just give it a little time. If you don’t want to take some time off, we can assign you to another story while we straighten out this mess.”

Ted pulled a file toward him. “Looks like the St. Genevieve area is going to get hit with another flood. I need somebody down there to cover it.”

Zach stared at the editor as if he’d gone crazy. “You’re kidding, right?”

Ted adjusted his glasses and looked across the desk at the younger man, the sudden glint of steel in his eyes making Zach wary. Ted had come up through the ranks, done a stint as an investigative reporter himself before taking over the editor job, and his staff respected his skill and integrity. But they also knew that his usual affable, easygoing manner was quite deceptive. He could be unrelenting and as tough as nails when he had to be. And now, as he fixed his razor-sharp eyes on Zach, it was clear that the conversation was over.

“You’re overreacting to this situation, whether you realize it or not. You need some time to decompress. Nobody can maintain the intensity, keep up the pace you set, month after month, year after year, without wearing down. You need a change of scene, a different focus, a fresh perspective. You can do that by taking the flood coverage assignment—or by taking a vacation. It’s your choice. But those are the only options.”

Zach frowned and took one hand off the wheel to flip on the overhead light, then glanced down at the map lying on the seat next to him. His city beat rarely took him more than a few miles south of town, and this part of the state was totally unfamiliar to him. St. Genevieve must be the next exit, he decided, though it was hard to tell in the dense fog that had reduced visibility to practically zero and obscured most of the highway signs.

Zach tugged at the knot of silk constricting his throat and drew in a relieved breath as the fabric gave way slightly. He didn’t like ties. Never had. But dinner with the publisher was definitely a “tie” occasion. Even though dinner had ended late, he’d wanted to get settled in and start his interviews for the flood piece first thing in the morning.

At least Simmons had had the guts to discuss the situation with him face-to-face, he thought grudgingly. The publisher had assured him that the paper stood behind him, that they had confidence in his reporting. But they’d still pulled the series. And as far as Zach was concerned, actions spoke louder than words.

Zach flexed the muscles in his shoulders and glanced at his watch. Ten o’clock. It had been a long day, he thought. A very long day. And the only good moment had been Ted’s parting words.

“These setbacks happen to all of us, Zach,” he said, laying a hand on the younger man’s shoulder. “Don’t let it get you down. You’re a good reporter. One of the best. We’ll work this out.”

Ted’s compliments were rare, and therefore prized. It had been a satisfying moment for Zach. Maybe the most satisfying in his career for a long time, he realized with sudden insight.

Zach frowned. Maybe he’d just stumbled on the source of the discontent, the restlessness that had plagued him for the last few months. His satisfaction used to come from his work, the feeling that it was making a difference. And that’s where it should come from. Not from recognition by his boss. Yet Ted’s compliment had given him more satisfaction than any of the work he’d done for the past six months.

Zach remembered his early years as a reporter, when he’d fervently believed that he could make a difference, that his writing could right wrongs and make the world a better place. For the first time in his career he seriously questioned that belief, directly confronting the doubts that he now realized had been growing for quite some time. For fifteen years he’d devoted himself single-mindedly to his work—an insatiable, demanding mistress that took all the passion he had to give. And what did he have to show for his zeal and dedication? A few moments of satisfaction when justice had prevailed. But far more moments of frustration when some scumball short-circuited the system through power, money or influence and walked away, laughing in his face.

And he certainly didn’t have financial security. His meager savings were eloquent confirmation of journalism’s reputation as a notoriously low-paying profession. He had no home, unless you could bestow that generous title on the sparsely furnished one-bedroom apartment he’d lived in for years. And he had no personal life.

All he had at the moment was a depressing feeling of emptiness.

As his precise, analytical mind clicked into gear, Zach tried to pinpoint exactly when his passion for tilting at windmills began to ebb. It might have been three years ago, he thought, when his story on corruption in the building industry blew up in his face thanks to a well-crafted smear campaign that didn’t quite discredit him but hurt his credibility enough so that no one took his coverage seriously. Or maybe it was the story he did on teenage prostitution last year, when he spent too many depressing nights on the streets with kids who should have been at pep rallies or studying for algebra exams, not hawking their bodies.

But it didn’t really matter when he’d stopped believing that what he did made a difference. The fact was he had. Maybe it was burnout, as Ted had hinted. Maybe he did need a break. It might not be a bad idea, after all, to take some time off when this assignment was completed.

But why had he burned out? Not everyone did. Josef certainly hadn’t. Zach shook his head as he thought of his idealistic journalism school classmate, back home now in Eastern Europe, fighting the good fight, as he called it, trying to make his country safe for freedom. Josef’s vision had never faltered, even in the face of setbacks and personal danger, and Zach admired him for that. He wished he had more of Josef’s conviction and optimism. But he didn’t. Not anymore. He’d seen too much and given too much. The well was dry.

Loving Angel (A Divisa Novel Book 4) by J.L. Weil
Dark Times in the City by Gene Kerrigan
A Civil Action by Jonathan Harr
El último grumete de la Baquedano by Francisco Coloane
Home Is Where the Heart Is by J A Fielding, Bwwm Romance Dot Com
The Dark Inside by Rupert Wallis
Looking for JJ by Anne Cassidy
The Path of Ravens (Asgard vs. Aliens Book 1) by Lentz, P.K.
Ever After (Love to the Rescue Book 3) by Rachel Lacey
Coming Home (The Morgans) by Grey, Savanna