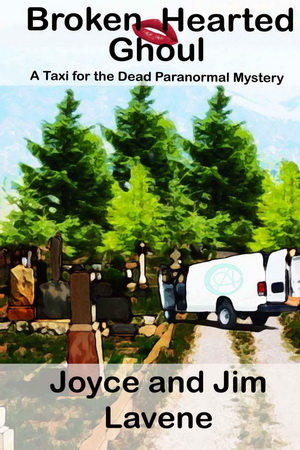 A Taxi for the Dead Paranormal Mystery

No part of this book may be reproduced, scanned, or distributed in any printed or electronic form without permission. Please do not participate in or encourage piracy of copyrighted materials in violation of the authors’ rights. Purchase only authorized editions.

My name is Skye Mertz, and I’m a zombie.

I know. Not exactly a great pick-up line at a bar, huh?

I’m not the newfangled, brain-eating kind of zombie who runs around moaning and pulling off body parts. I come from old magic, and I look mostly normal. Short blonde hair. Blue eyes. About five foot ten.

My dead husband—this is two years back—used to say I looked like an ostrich first thing in the morning. I think it was supposed to be affectionate.

How I got here is a long story. Where I am right now is waiting for a man at an old motel in Gatlinburg, Tennessee.

It’s cold—though I can’t feel cold anymore. It’s after two a.m., but since I don’t sleep anymore, no problem.

“How long do we have to wait for him?” my new partner asked.

That’s Debbie Hernandez—late twenties, dark hair, big brown eyes. She looks like someone’s mother with her round hips and big breasts. There’s something very understanding about her. She’s compassionate.

I don’t know what she’s doing out here.

She’s not a zombie, but she’s taken on the twenty-year debt for her husband.
He’s
the zombie. She doesn’t want him to know. It’s complicated.

Abe, our zombie master—he hates when I call him that—grants everyone twenty years of life when he takes them. Since it usually happens when you’re on your last legs, most people are glad to do what needs to be done.

We wear his mark—a small blue symbol tattooed on the heel of one foot. It kind of looks like an A with a circle around it.

Each of us owes Abe twenty years of service of one kind or another. He’s into a little bit of everything so I guess he needs all different people.

Debbie is the first non-zombie to take on service to Abe that I know of. She was willing to do whatever he asked to keep her husband going. She said her kids needed a father.

I can relate to that. Abe came to me when I was in the hospital after the terrible wreck that left my husband, Jacob, dead at the scene. He offered me twenty years, and I jumped at the chance.

My little girl, Kate, was only five at the time. With Jacob dead, and my prognosis heading in the same direction, it was an easy choice for me. Kate will be an adult when my twenty years of service is up. She can take care of herself then. It was a good exchange.

“It’s cold out here.” Debbie exhaled into the frosty night air and rubbed her gloved hands together.

“You should dress warmer.”

“Terry must be the same, right?” Terry was her husband. He was a cop who’d been shot during a hold-up. It had been two weeks since she’d agreed to trade her service for his life.

“He’d never let on that he was cold, even when he was alive.” She smiled. “He’s always been a
real
man.”

Ugh!
Protect me from women who believe their men are worthier than them. Jacob and I would’ve never lasted a day if he’d had that attitude.

I’d been a Nashville cop for longer than Jacob had been. Not that being his partner was what made him respect me. Some people just won’t have it any other way. I respected him too.

I finally saw movement at the seedy hotel. “I think that’s him.”

“What do we do with him?” This was Debbie’s first time in the field. Abe said he was moving her around, trying to find the right spot for her.

She was still getting used to things. I cut her some slack. “His twenty years are up. Some people don’t want to let go, even though they made the deal. Like this one. He was supposed to turn up at the mortuary. He never showed up.”

“He’s dead already, remember? Basically, we just take him back. Abe cuts the silver cord that binds them to him. That’s about it.”

“Are they all this way?”

“Most seem to be grateful for their time, and they go along quietly. They just step into the taxi for the dead, and we’re off.”

Debbie shook her head. “Taxi for the dead?”

“That’s kind of what I named my van. It only carries dead people.” I grinned. “At least until
you
came along.”

“This whole thing is so strange. I’m not sure I understood what I was getting myself into when I agreed to this.”

Too late now.
No point in telling her. The contract can only be broken by death. It was between her and Abe. Nothing to do with me.

“He’s definitely trying to ditch us.” I pointed at the man as he stealthily slid toward his car, glancing furtively around the parking lot. “I really hate these ones. Come on. Let’s go.”

I started the engine, and drove across the empty street. All the outside lights were out. Had he picked this place because it was dark thinking he could hide?

I hoped he didn’t think it mattered to me. He should have known that zombies have a nose for each other. I can smell one a mile away.

I saw someone else get in the car with him. I
really
hated when a family member was with someone who didn’t want to leave. It made it hard when they begged and pleaded for the other person’s life.

There was nothing
I
could do about it. Even if I wanted to let him run, Abe would just send someone else, and I wouldn’t get paid. I might be a zombie, but I still had some physical needs, and my daughter, Kate, had plenty of them.

I parked the van, and approached the old Ford. My zombie was getting ready to pull out of the parking lot. I tapped on the driver’s side window.

“Yes?” He fearfully rolled the window down an inch or so.

“It’s not up to me, sir. You struck a deal with Abe, and that twenty years has expired. Actually, it expired yesterday. Please step out of the car, and come with us.”

“No. You don’t understand.” He smiled at the woman in the car with him. “I got married in the last few years. My wife is pregnant and about to give birth. I want to see my son. Then I’ll go with you.”

I felt Debbie sneak a peek at me, probably wondering if I was going to let him go. I’d done it before, actually. It just meant running after the person again. There was always a good excuse to stay. I knew that. I hoped I wouldn’t beg for my life when my time was up.

I couldn’t see the woman’s face in the dark car, but she was in for a surprise. “I think I can help with this problem, sir. That may be your wife, but that’s not
your
child.”

The woman with him laughed—a titter of nerves in the interior shadows. “Of
course
it’s his child. Don’t listen, Frank. The baby is yours.”

“Zombies don’t get pregnant or get other people pregnant,” I told her. “We just don’t have it is us anymore. We’re dead.”

“What?” Mr. Tappman looked at his wife for an explanation. “Is that true, Marcia?”

“Not exactly.” She tried to dodge the issue, and failed. “You didn’t donate the sperm, but you’re the baby’s
emotional
father. That counts for something, right?”

Mr. Tappman kind of folded after that. He’d been defiant. Now he was afraid. He got out of the car and held out his hands like I was going to put him in handcuffs or something.

“I’m not the police,” I said. “Just get in the van. You know how this goes. You got your twenty years. I hope you got to do a lot of great things with your time.”

He looked up at the night sky and sighed. “I wish I could have another twenty.”

“Maybe Abe can help you with that.” I shrugged. “I don’t know. I only bring people in when their time is up. I’m a zombie, just like you.”

“You probably don’t think it will be hard when it’s your turn.” He stared at me. “But it
will
be.”

“Thanks.” I held open the van door for him. “You’re probably right.”

Marcia got active at the last minute when she finally realized we were really taking away her lover. She screamed, and threw herself on the hood of the van. I moved away carefully. I had no mandate to do anything with the living—that wasn’t my job.

She finally subsided, sobbing loudly as she leaned against the other car.

I heard Debbie’s heavy sigh next to me. I wanted to tell her that it got easier as it went along. It wouldn’t be the truth.

It was a long drive back to Nashville. Debbie slept most of the way.

I could feel Mr. Tappman’s gaze boring into the back of my head. I was hoping he wouldn’t try to make a run for it when we stopped at a light or something. I’d had that happen a few times. It wasn’t a pleasant experience.

I carried a Taser. If I had to, I could take him down. But that meant picking him up, and carrying him to the van. I didn’t get paid more for the extra work.

There was some reason that zombies had to come in at the end of their service. I wasn’t sure why. Abe wasn’t exactly the sharing type in that respect. Maybe they became brain-eating zombies—all
Night of the Living Dead
or something. I didn’t know. Since it would happen to me someday, I wasn’t sure I wanted to know.

Just do my job, keep my head down, and go home to Kate. That was my motto.

As we approached Nashville, my hometown, the neon lights were starting to fade into the morning sky. We’d left behind the Smoky Mountains, and approached the skyscrapers perched on the edge of the Cumberland River.

Somewhere out there, a guitar player was hoping for a lucky break today. This was Music City—the home of the Grand Ole Opry—and a thousand hopeful hearts.

My hometown had grown a lot in the past twenty of my thirty years. It wasn’t just country music and guitar players looking for a break anymore. It was banks, and insurance companies that blended in with the rolling hills.

Kate was still asleep in her bed. I thought about her often at times like this. It was a quiet and empty time that I was usually alone. These moments were what people fought so hard to keep. Life was precious in all its splendor—but no one could hold on to it forever.

“It’s so beautiful,” Mr. Tappman whispered from the backseat. “We don’t appreciate it, do we? Life is . . . amazing.”

“It is.” I wished Debbie would wake up and talk to him. I didn’t feel like a philosophical discussion about why he was there.