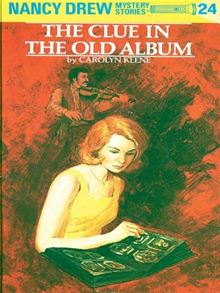 CHAPTER I - A Stolen Purse

THE CLUE IN THE OLD ALBUM

Nancy Drew witnesses a purse snatching and runs after the thief. She rescues the purse, but not its contents, then is asked by the owner, a doll collector, to do some detective work.

“The source of light will heal all ills, but a curse will follow him who takes it from the gypsies.”

This is one of the clues Nancy is given to find an old album, a lost doll, and a missing gypsy violinist. The young sleuth never gives up her search, though she is poisoned by a French-swordsman doll, run off the road in her car by an enemy, and sent many warnings to give up the case.

Fans will enjoy Nancy’s clever ways of finding all she seeks, and bringing happiness to a misunderstood child and her lonely grandmother. 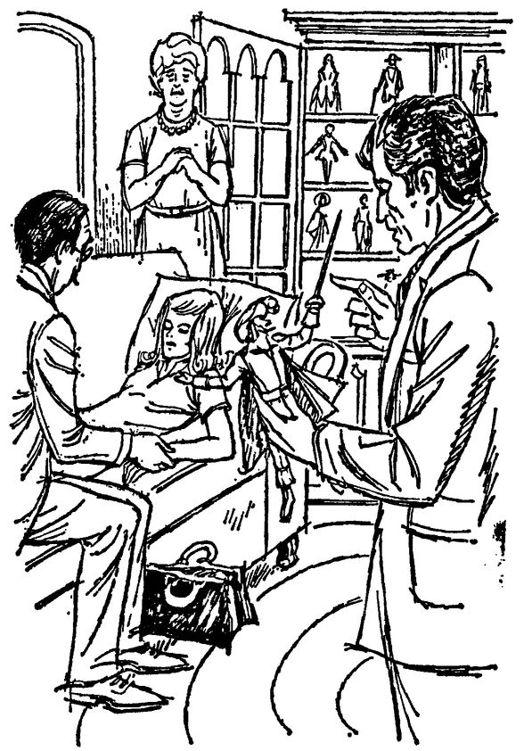 “Nancy has been poisoned!” the doctor announced. 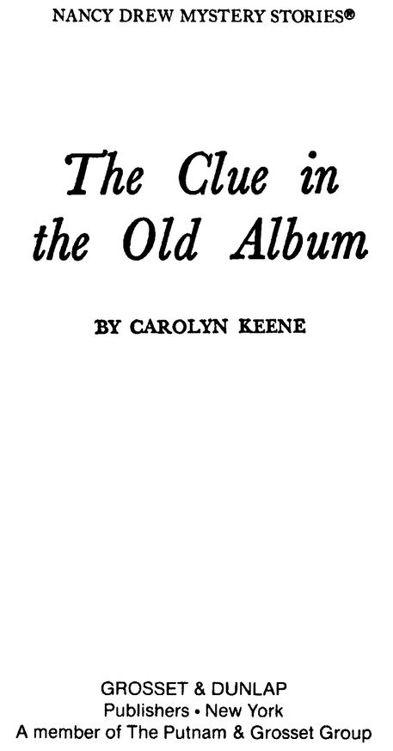 Acknowledgement is made to Mildred Wirt Benson, who under the pen name
Carolyn Keene, wrote the original NANCY DREW books

The Clue in the Old Album

A hush came over the audience as Alfred Blackwell tucked his violin under his chin. When he began the melody, Nancy was startled by a stifled sob from a white-haired woman who sat across the aisle. She was listening with rapt attention and tears rolled down her cheeks.

Nancy also saw something else. A dark-haired man on the aisle seat next to the woman reached for a jeweled purse that lay unguarded in her lap. Slyly he dropped it into his pocket, got up, and started quickly for the lobby.

Before Mr. Drew could recover from his surprise, Nancy had scrambled past him and hurried up the aisle after the thief. He pushed past an usher and fled into the lobby. Nancy reached it a moment later, but the thief was out of sight.

Doorways opened into corridors in three directions and led to various exhibition rooms. Nancy chose the nearest one. The only person in sight was a watchman.

“Did a man in evening clothes come this way just now?” she asked.

“No one’s been through here in the past twenty minutes, miss.”

“He stole a jeweled purse! Please help me catch him!”

The guard hurried into the second corridor and Nancy took the third. As she rounded a turn, she saw the thief far ahead. He had stopped to examine the purse.

“Drop that!” Nancy cried out, running toward him.

The man pulled out the contents, flung the bag away, and darted through a door opening into an alley. Nancy snatched up the purse, then resumed the chase. The alley was dark and she could not see the man. Disappointed, but aware that it was hopeless to pursue him, she turned back. 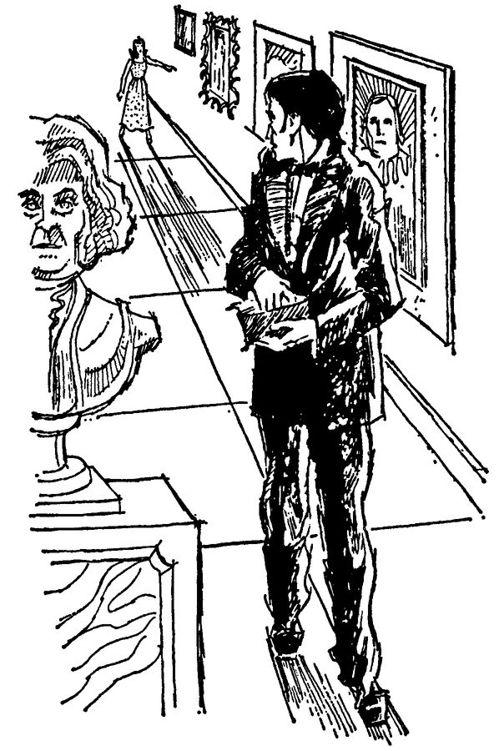 “Drop that purse!” Nancy cried out.

From the museum lobby came the sound of voices. Among a group of people Nancy saw the guard. Behind him were her father and the elderly lady whose bag she had retrieved.

When the woman saw the purse in Nancy’s hand, she exclaimed, “Oh, I’m so thankful you recovered my bag. The contents are precious to me.”

“I’m sorry the thief escaped,” Nancy said. “And I’m afraid he took whatever was inside the purse.”

She handed it over. Nervously the woman opened the bag. It was indeed empty!

“Oh, my money is gone! And a letter and a photograph that mean a great deal to me!” she cried.

“No!” the woman insisted. “Thank you, but I do not want any publicity.”

Mr. Drew said the authorities should be notified. “No thief should be allowed to go free.”

“Very well,” the woman agreed reluctantly. “I suppose the report must be made in my name. I am Mrs. John Struthers of Kenwood Drive.”

Mr. Drew asked if she could identify the purse snatcher.

“I scarcely noticed him,” she confessed.

Nancy spoke up. “He was about thirty years old with a mottled complexion and piercing black eyes. He walked with a slight stoop and wore evening clothes that were too large for him.”

“You’re observant, miss,” the guard said. “Come to think of it, I know a fellow who looks like that. Let me see—it must have been when I was custodian at the bank. Yes, that’s it.”

“He worked there?” Nancy asked, amazed.

“No. He used to come in to see one of the tellers. They got mixed up in some crooked scheme. The teller was fired. I don’t know what happened to his buddy, but I heard he was a professional pickpocket.”

“How long ago was that?” Mr. Drew asked the custodian.

“Six months or more. Excuse me. I’ll phone the police.”

Mrs. Struthers had regained her poise but a faraway look had come into her eyes. “If it hadn’t been for that gypsy music—” She broke off as if she regretted having revealed something.

The woman turned to Nancy and added, “I am very remiss. I haven’t thanked you for all your trouble, and I really am most appreciative. May I know your name?”

“Nancy Drew,” the strawberry blond, blue-eyed girl replied. “And this is my father,” she added, introducing tall, handsome Carson Drew.

Mrs. Struthers smiled and said, “I see now why it was you, Nancy, who spotted the thief. You are often written up in the papers for your cleverness in tracking down unscrupulous people.”

Nancy laughed, brushing aside the compliment. She asked if the Drews could be of any further help to Mrs. Struthers.

“I believe not, thank you,” the woman replied. “I must find my granddaughter, Rose, who came with me. We were invited to Madame Mazorka’s reception for Mr. Blackwell. But I hadn’t planned to go on account of Rose.”

I Knew You Were Trouble: Accidents Happen by Potter, M. X.
Out of the Dungeon by SM Johnson
Undone by DiPasqua, Lila
A Rocky Mountain Christmas by William W. Johnstone
The Artifact of Dissium (Demona Book 2) by Megan A. Hepler
Bowles, Jan - Tamed by the Dom [Guilty Pleasures 3] (Siren Publishing Everlasting Classic) by Jan Bowles
A Crack in the Wall by Claudia Piñeiro
No Show of Remorse by David J. Walker
Murder at Beechwood by Alyssa Maxwell
Somewhither: A Tale of the Unwithering Realm by John C. Wright