Read A Billionaire for Breakfast Online

A Billionaire for Breakfast 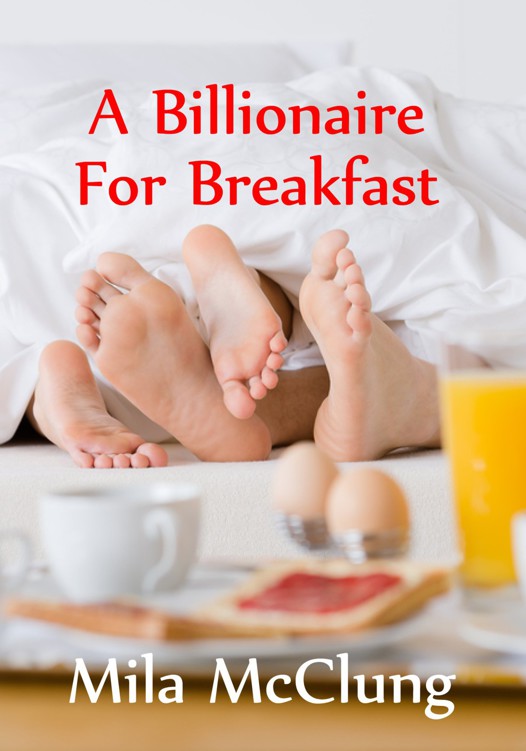 When Tess Jenkins impulsively agreed to join Kylie Preston on a hunt for billionaire husbands in the Cayman Islands she had no idea what kind of trouble they’d get into – or that she’d fall head over heels for a gorgeous beach bum named Angel. But is he all he seems to be, or someone completely different?

A BILLIONAIRE FOR BREAKFAST is a short novelette – the first in a series of sexy – and I do mean sexy – stories called MAN SEASON. It has about 40 pages.

A BILLIONAIRE FOR BREAKFAST

This is a work of fiction. Names, characters, places and
incidents either are the product of the author’s imagination, or are used
fictitiously, and any resemblance to actual persons, living or dead, business
establishments, events, or locales is entirely coincidental.

A Billionaire For Breakfast

Sea air had to be the most
refreshing, scintillating fragrance in the world! Or so Tess Jenkins thought as
she stepped off the plane into the brilliant, tropical sunshine of the
Cayman Islands
. She and Kylie Preston had flown to
Miami
the night before, stayed at a nice
but inexpensive motel to save money. They woke early, perused the trendiest
shops in
South
Beach
to give themselves that ‘ritzy look’
as Kylie called it. Now they were ushered off the plane like royalty and taken
through the airport security rituals with gentle guidance. Not at all like the
warden meets the prisoners type hassle one usually received during those
moments.

“Am I dreaming?” Tess whispered,
sweeping her luxurious auburn hair away from her face. Her freckled cheeks
dimpled as she smiled; her eyes soft and black as onyx.

The women were shown to a waiting
white limo that glistened like pearls in the sunlight.

“No, darling, you are definitely not
dreaming! This is exactly how I pictured it! Nice to know some things do live
up to their hype.”

They were executing a careful plan
that Kylie had dreamed up years before. She pinched every penny she could get
her fingers on, worked every extra hour allowed at the office, until she had
enough money to take an expensive two week vacation in the Caymans. And, with
Tess’ added savings, they were on their way! But it wasn’t a simple vacation –
they were on the prowl – for billionaire husbands.

Kylie had proposed the idea to Tess
one afternoon after a birthday party at the office, where the usual frat boy hijinks
had soured their attraction to ordinary guys.

“I am so done with this!” Tess
shouted above the childish snickers. “When do men get over the fart jokes and
lewd eyeballing?”

“Most, never,” Kylie sighed. “You
know, I used to watch
Gunsmoke
with my dad. In one episode Miss Kitty
was ruing the death of an outlaw ex-boyfriend. She said something like, ‘he was
the first real grown-up man I’d known in my life.’ It made me realize I have
never actually known a guy who acted like a grown-up man. And that was
depressing as hell!”

“God, I know what you mean! I’m not
sure where a girl could meet real men, or even if they truly exist … except in
black and white movies and a TV show or two. My mom watches those classic film
channels, and I’ve gotten hooked on them myself. We sit there sometimes five
nights a week, staring at
Cary
Grant or Joel McCrea or whoever. I don’t think they grow them like that
anymore!”

“That must put a damper on your love
life, sitting at home with your mom every night.”

“What love life? Honestly, Kylie, it
isn’t worth the effort!”

“Hum, I’m beginning to see exactly
how things are with you. I’ve been hatching a plan in my head for awhile now,
and I think it could work out better if I let you in on it. Sit down, Tess, let
me state a proposition to you … and I don’t want you to answer right away. Give
yourself a few minutes to allow the idea to settle.”

Tess eased back onto a chair, tense
with excitement at what Kylie might have to say.

“After my parents died, I took a lot
of time off from my work to think about my path in life. I finally realized
that what I wanted was a man, a real man. But not just some guy I might meet in
a bar. I wanted someone interesting, exciting, a man who could take my breath
away!”

“Oh, no, even better than that! I
wanted a billionaire!”

“Dream on, sister!” Tess smiled then
she caught a determined look from Kylie’s face and knew she wasn’t kidding. “I
guess most girls want that, too, Kylie. But it’s a dream, a fantasy …”

“It doesn’t have to be. Once I made
up my mind about it, I started a clear course of action. I studied every book I
could get about manners and etiquette, and style, and sex … the
Kama Sutra
is quite a blast! Ever read it?”

“I highly recommend it. To catch a
rich man, a woman needs to know a little bit about everything, and a whole lot
about the subjects those men are interested in. I’ve taken classes on finance,
investing, even yachting …”

“But what’s the point to it? You can’t
meet billionaires in
Astoria
.”

“I don’t intend to try. I’ve been
saving my money, to get ready for a two week trip to the Cayman Islands! I have
enough to rent a posh house and really live it up while I’m there.”

“Sounds wonderful! I don’t have much
planned for my vacation. I’ll probably mope around the house, watching old
movies and eating too much.”

“Not if you’re in the islands, with
me!”

Tess stared at Kylie. “Why would you
want me there?”

“Well, I’ve been thinking that a
woman showing up alone would get suspicious looks. But a couple of friends on a
Girls Only vacation … now that will get their interest. You know how men are …”

“No, sadly, I don’t. I mean, I’ve had
boyfriends, but we always seemed more like pals than lovers. Maybe I don’t have
what it takes to attract cool guys.”

“Oh, but you do! Innocence is
refreshing to those jaded souls. And that auburn hair will make you a
stand-out, for sure!”

“Okay, so let’s say I am popular
while we’re there, though it’s a total fantasy, then won’t I cramp your style?”

“No, no, darling. You can take one,
I’ll take another. As long as he’s filthy rich, that’s all I care about.”

Tess stood, began to stack dishes and
run water in the break room sink. She glanced out the window at the bare trees
as they shivered in a cold winter wind. The buildings down the street were all
full of people just like them, working their bums off for next to nothing. Cars
passed like toys on a track, back and forth, endlessly. It was a dull, frigid
scene. It seemed unimaginable that she could escape it, to fly off into an
ocean paradise with bright blue skies and blissful beaches.

It was a fantasy. Kylie was beautiful
with her long pale blonde hair, cerulean eyes and athletic legs, but she was
fooling herself if she thought she could meet and fall in love with a guy in
two weeks. Life was never that easy. But then, she didn’t say she wanted love,
did she?

“Is something bothering you?”

“Yes, you haven’t mentioned the word
‘love’. Doesn’t that mean anything to you?”

“I’m no fool, Tess. I know love is
just something people talk about in lyrics or books or films. That’s the
fantasy. You have to compromise your feelings to get what you want out of
life.”

“What if I’m not willing to
compromise?”

Tess hit the number for Carol
Jenkins’ cell phone. She was retired after toiling in the
New York
garment industry for decades. Now
all she did was sit home and stare at old movies. Tess didn’t have a dad – in
her life, anyway - he had been a rich boy who deserted Carol for a European
prep school before she could tell him about Tess. Now Carol was an out and out
man-hater, unless they were dead film stars.

Tess knew her mother’s views, still,
she was shocked at Carol’s reaction.

“If you go with this woman, you will
never set foot in my house again!”

“You don’t know these rich bastards,
and the lies they tell.”

“Mom, just because my dad is a rat
doesn’t mean every man is.”

“Well, I won’t say what she is then.
But if you buy into this insane scheme, you’re no better than what she is!”

“You’re letting the past ruin what
bit of life you have left. When I get back, we’ll talk it all out.”

“No, we won’t! Find another roommate,
Tess! I mean it! I won’t have this stuff going on under my nose!”

Tess stood there, blinking tears at
her mother, unbelieving at the coldness in her voice.

“Fine, I’ll look for another place, when
I get back!”

Now, sitting there with Kylie on the
back seat of the limo, Tess recalled the harsh words her mother had said. She
had an urge to call her but she refused to give in to it. For once, let Carol
do the calling, and the apologizing. Tess was through being a doormat.

The ride to the rental house was slow
and luxurious. The limo had a built-in bar and snack counter stocked with
several fresh seafood appetizers and dainty alcoholic wonders all dressed up
with delightful little parasols. Kylie imbibed freely but Tess decided to sip a
bit of something here and nibble on something small there – she didn’t want to
gain any weight on this trip or lose her common sense in a drunken haze.