Read A Bit on the Side Online 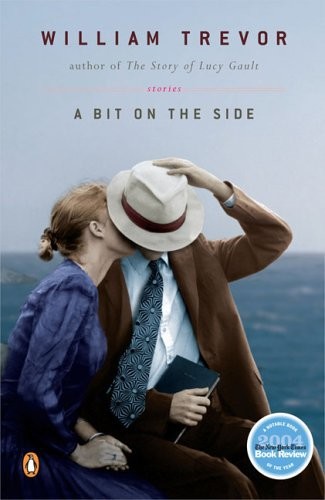 A BIT ON THE SIDE

‘A better crafter of stories than Joyce, Chekhov or Updike’
Harpers & Queen

‘He simply never fails. With the subtlest shift of syntax, an expert change of hue, Trevor leads us through twelve little worlds which, taken together form the sensual, forgiving, sad and admiring universe in which he lives’
Herald

‘How to explain the marvel that is William Trevor? He has retained his abiding sense of wonder and a kindly, if all-seeing, curiosity in humankind, its hopes, sins and failures’
Irish Times

‘Trevor continues to be the great chronicler of tiny, painful nuances… to engage and draw the reader into the small human drama’
Economist

‘Characteristically assured and subtle. Spotlighting lives entangled in the past and characters who feel out of their element in today’s world, the stories – shrewd, poignant, ruefully funny – are masterpieces of firmly wrought delicacy, spot-on social observation and psychological and emotional truth’
Sunday Times

William Trevor was born in 1928 at Mitchelstown, County Cork, and he spent his childhood in provincial Ireland. He attended a number of Irish schools and later Trinity College, Dublin, and is a member of the Irish Academy of Letters. He now lives in Devon.

He has written many novels, including
The Old Boys,
winner of the Hawthomden Prize;
The Children of Dynmouth
and
Fools of Fortune,
both winners of the Whitbread Fiction Award;
The Silence in
the
Garden,
winner of the
Yorkshire Post
Book of the Year Award;
Two Lives,
which was shortlisted for the
Sunday Express
Book of the Year Award and includes the Booker-shortlisted
Reading Turgenev; Felicia’s Journey,
which won both the Whitbread Book of the Year and
Sunday Express
Book of the Year Awards;
Death in Summer
; and, most recently,
The Story of Lucy Gault,
which was shortlisted for both the Man Booker Prize and the Whitbread Fiction Award. A celebrated short-story writer, his most recent collection is
The Hill Bachelors,
which won the Macmillan Silver Pen Award and the
Irish Times
Literature Prize. Most of his books are published in Penguin, including his
Collected Stories.

In 1999 William Trevor received the prestigious David Cohen British Literature Prize in recognition of a lifetime’s literary achievement. And in 2002, he was knighted for his services to literature.

These stories were originally published in the
New Yorker,
the
New Statesman, Tatler
and the
Spectator

Sitting with the Dead

Sitting with the Dead

His eyes had been closed and he opened them, saying he wanted to see the stable-yard.

Emily’s expression was empty of response. Her face, younger than his and yet not seeming so, was empty of everything except the tiredness she felt. ‘From the window?’ she said.

She turned away from the bed. He would manage on his own if she didn’t help him: she’d known him for twenty-eight years, been married to him for twenty-three. Whether or not she brought the coat up to him would make no difference, any more than it would if she protested.

‘It could kill you,’ she said.

‘The fresh air’d strengthen a man.’

Downstairs, she placed the boots ready for him at the back door. She brought his cap and muffler to him with his overcoat. A stitch was needed where the left sleeve met the shoulder, she noticed. She hadn’t before and knew he wouldn’t wait while she repaired it now.

‘What’re you going to do there?’ she asked, and he said nothing much. Tidy up a bit, he said.

He died eight days later, and Dr Ann explained that tidying the stable-yard with only a coat over his pyjamas wouldn’t have hastened anything. An hour after she left, the Geraghtys came to the house, not knowing that he was dead.

It was half past seven in the evening then. At the same time the next morning, Keane the undertaker was due. She said that to the Geraghtys, making sure they understood, not wanting them to think she was turning them away for some other reason. Although she knew that if her husband had been alive he wouldn’t have agreed to have the Geraghtys at his bedside. It was a relief that they had come too late.

The Geraghtys were two middle-aged women, sisters, the Misses Geraghty, who sat with the dying. Emily had heard of them, but did not know them, not even to see: they’d had to give their name when she opened the door to them. It had never occurred to her that the Geraghtys would attempt to bring their good works to the sick-room she had lived with herself for the last seven months. They were Legion of Mary women, famed for their charity, tireless in their support of the Society of St Vincent de Paul and their promulgation of the writings of Father Xavier O’Shea, a local priest who, at a young age in the 1880s, had contracted malaria in the mission fields of the East.

‘We only heard of your trouble Tuesday,’ the thinner and smaller of the two apologized. ‘It does happen the occasional time we wouldn’t hear.’

The other woman, more robust and older, allowed herself jewellery and make-up and took more care with her clothes. But it was her quiet, sharp-featured sister who took the lead.

‘We heard in MacClincy’s,’ she said.

‘It’s never wasted.’ There was a pause, as if a pause was necessary here. ‘You have our sympathy,’ was added to that, the explanation of why the journey had not been in vain.

The conversation took place entirely at the hall door. Dusk was becoming dark, but over the white-washed wall of the small front garden Emily still could see a car drawn up in the road. It was cold, the wind gone round to the east. They meant well, these women, even if they’d got everything wrong, driving out from Carra to visit a man who wouldn’t have welcomed them and then arriving too late, a man whose death had spared them an embarrassment.

‘Would you like a cup of tea?’ Emily offered.

She imagined they’d refuse and then begin to go, saying they couldn’t disturb her at a time like this. But the big, wide-shouldered one glanced at her sister, hesitating.

‘If you’re alone,’ the smaller one said, ‘you’d be welcome to our company. If it would be of help to you.’

The dead man had been without religion. Anyone could have told them that, Emily reflected, making tea. He would have said that there was more to their sitting at the bedsides of the ill than met the eye, and she wondered if that could possibly be so. Did they in their compassionate travels hope for the first signs of the belief that often came out of nowhere when death declared its intention? Did they drive away from the houses they visited, straight to a presbytery, their duty done? She had never heard that said about the Geraghtys and she didn’t want to believe it. They meant well, she said to herself again.

When they left, she wouldn’t go back upstairs to look at the dead features. She’d leave him now to Keane in the morning. In the brief time that had elapsed a day had been settled for the funeral, Thursday of next week; in the morning she would let a few people know; she’d put a notice in the
Advertiser.
No children had been born: when Thursday had passed everything would be over except for the unpaid debts. She buttered slices of brack and stirred the tea in the pot. She carried in the tray.

They hadn’t taken their coats off, but sat as still as statues, a little apart from one another.

‘Ah no. Ah no, don’t bother.’ They both protested, but she did anyway, and the kindling that had been in the grate all summer flared up at once. She poured their tea, asking if they took sugar, and then offering the brack. They began to call her Emily, as if they knew her well. They gave their own names: Kathleen the older sister, and Norah.

‘I didn’t think,’ Kathleen began to say, and Norah interrupted her.

‘Oh, we know all right,’ she said. ‘You’re Protestant here, but that never made a difference yet.’

They had sat with the Methodist minister, the Reverend Wolfe, Kathleen said. They’d read to him, they’d brought in whatever he wanted. They were there when he went.

‘Never a difference,’ Norah repeated, and in turn they took a slice of brack. They commented on it, saying it was excellent.

‘It isn’t easy,’ Kathleen said when the conversation lapsed. ‘The first few hours. We often stay.’

‘It was good of you to think of him.’

They asked her about the horses because the horses were what they’d heard about, and she explained that they’d become a thing of the past. She’d sell the place now, she said.

‘You’d find it remote, Emily,’ Kathleen said. Her lipstick had left a trace on the rim of the teacup and Norah drew her attention to it with a gesture. Kathleen wiped it off. ‘We’re town people ourselves,’ she said.

Emily didn’t consider the house she’d lived in for nearly thirty years remote. Five minutes in the car and you were in the middle of Carra. Mangan’s Bridge, in the other direction, was no more than a minute.

‘You get used to a place,’ Emily said.

They identified for her the house where they lived themselves, on the outskirts of Carra, on the Athy road. Emily knew it, a pleasant creeper-covered house with silver railings in front of it, not big but prosperous-looking. She’d thought it was Corrigan’s, the surveyor’s.

‘I don’t know why I thought that.’

‘We bought it from Mr Corrigan,’ Norah said, ‘when we came to Carra three years ago.’ And her sister said they’d been living in Athy before that.

‘Carra was what we were looking for,’ Norah said.

They were endeavouring to lift her spirits, Emily realized, by keeping things light. Carra had improved in their time, they said, and it would again. You could tell with a town; some of them wouldn’t rise out of the doldrums while a century’d go by.

Crucible by Gordon Rennie
The Sheikh's Offer by Brooke, Ella, Brooke, Jessica
Reflection (The Chrysalis Series) by Sallinger, Elene
Breach of Promise by James Scott Bell
Skybreaker by Kenneth Oppel
Stuck on You by Thurmeier, Heather
The Floating Island by Jules Verne
Colosseum by Simone Sarasso
The Way to a Man's Heart (The Miller Family 3) by Mary Ellis
A Warrior's Sacrifice by Ross Winkler