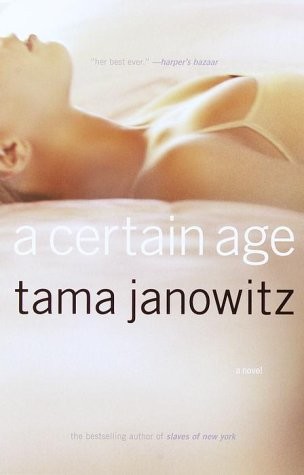 She had an urge
to tap his head with a spoon. It might wake him out of his trance. She could visualize the yellowish brains trickling over his glasses frames, such mild yolk—and the other passengers on the jitney to the Hamptons would no doubt quickly whip croissants out of their weekend luggage and come to dip the corners in the soft stuff, hoping to taste so much money.

She grabbed the seat next to his.

"You usually drive to the Hamptons on the weekend?" Florence asked.

He nodded. "Only my car is in the garage."

"Being fixed," Florence said. Maybe having so much money had made him sluggish, softened his brain, like the last Emperor of China. He seemed to be cocooned in something. He seemed swaddled, a great distance away, though she was right beside him. The traffic chugged forward and died to a halt. The air was gray and thick with exhaust. Here there were no trees, only old factories and warehouses, like rusted shipwrecks jutting from cement. If there was already so much traffic, it would be midnight before the bus got to the Hamptons.

"And somebody ... hit it?" Whatever he had was catching. She was speaking slowly too.

"No . . . it's a convertible, you see, and the roof was closed. When I got into the car, I thought, Something stinks, and next to me, on the passenger's seat, some idiot had thrown a fish head."

"Why would they do such a thing?"

"I can only assume . . . because I parked in front of someone's yard, and I know there have been a lot of local complaints in Bridgehampton that Derek and Trevor opened a restaurant there. I threw the fish head onto the sidewalk. Well, it was so warm and sunny I opened the roof . . . and this is sort of . . . complicated . . . however ... a few days later I noticed . . . there was a terrible smell . . . and I cleaned out the car . . . but the smell didn't go away. And after another week I tried to clean it again. I put the roof up . . . because I was going into the city and—"

"Weird," Florence said. "And you really don't think it was some girl or something?"

He either didn't like her question or, having begun, couldn't stop before he had finished his story. "And when I put up the roof ... I found wedged down in the back part where the roof goes

when it's open . . . there was another fish head . . . and by now it was crawling with maggots. And the company can't get the smell out . . . they've replaced the seats, and had it cleaned, but they can't seem to get rid of the smell."

"Ugh. How creepy!" She gave his hand a squeeze. It was soft and rubbery, and next to her hand, with its long graceful fingers, his looked like a child's. This seemed somewhat sad, the reverse of one of those children who age prematurely. "You're sure it wasn't someone who knew you?"

"Oh, God, I don't know," he said. "This weekend I'm just going to go out and buy another car." Then, changing the subject, he said brightly, "Hey! A friend of mine just gave me a picture he took of me—a portrait. He's a well-known fashion photographer."

"Yes?" He was cute when he smiled. His whole face cracked open, as if sealed under the layers of skin was a trapped baby allowed out only on special occasions. "The picture's kind of artistic, if you know what I mean—I'm naked." He pronounced both "artistic" and "naked" as if they came with quotation marks around them.

He opened a manila envelope and handed the photograph to her. In the picture he was seated nude on a stool, looking as if he might topple off, balanced only by his two skinny legs, spread far apart, feet clinging to the rungs. On his face was an expression of such supreme self-pride that Florence knew it could only be related to the appendage dangling between his legs. The bus was heavily air-conditioned. She reached for a sweater and put it on while she thought of what to say.

"It's awfully hard to see in this light," she said. She was shocked, which she supposed was the point. He seemed so prissy, then to start flashing naked pictures of himself. Maybe it was a little test, to see how she would respond. She fumbled in her pocketbook for the remains of a Swiss dark chocolate nut bar she had been nibbling throughout the day. "Very nice!" The words came out slightly patronizingly, but he didn't seem to notice.

"I thought ... he did a good job. My friend is very talented,

as a photographer ... I don't know what I'll do with it, though. Frame it, I guess, and hang it in the bedroom." He turned to her and whispered in a confidential voice, "You were right ... I think it was this girl I was going out with who put the fish heads in my car. She knew I had just gotten a brand-new SAAB convertible."

"She must have been heartbroken," Florence said. "That you broke up with her—and that was all she could think of doing, to get revenge. But it wasn't funny! It wasn't very nice!"

"No . . ." said Charlie thoughtfully. "You know, I don't think I've ever really spent much time talking to you. This is great, that we're getting a chance to talk."

"I think so too," she said, giving his arm, padded beneath a robin's-egg-blue cotton sweater, a quick stroke. Though she appeared aloof, she was an oddly affectionate person—it was as if touch was the only way she could reassure herself that anyone else existed. The cool blond looks were blended in a boyishly jock physicality, more California than New York.

The bus held forty or fifty passengers and was completely full. The travelers, with their pinched, ferocious expressions and their too brightly glittering eyes, projected an aura of paranoia mixed with anxiety that permeated the bus. The hostess, a surly overweight young woman in her mid-twenties, stumped up and down the aisle delivering plastic bottles of mineral water and cups; she was probably a local from Long Island, hired for the season. She had the sour expression of a camp counselor devoting herself to a summer's worth of sadistic activities. And yet Florence always felt calmer heading east. The Western migration had not been the right journey for her mother, nor for her. All her life she had felt rootless. But her mother, after marrying, had gotten trapped, preserved in the amber sun of Southern California. She had always encouraged Florence to go back East, to marry rich, to return to spawn like a reintroduced salmon. And though her mother was no longer alive, she had managed, somehow, to imprint this on Florence—or perhaps it went deeper, imprinted on her strands of DNA like a celestial map carved on an ancient Aztec necklace.

"Would you like to do something?" Charlie said. "Tomorrow night, maybe?"

She was slightly surprised, but did not want to hurt his feelings by pausing too long. "Of course!" she said. "Great. I'll have to check with Natalie, though."

"How old is Charlie Twigall?"

"Never ages," said Natalie de Jongh, at whose house she was a guest for the weekend. "It's unbelievable. I've known him since he was at least forty and he hasn't changed at all." Natalie was forty-two. "Of course, he's lost his hair. Women go crazy for him; from what I hear he's incredibly well-built. When he had his hair he was known as Charlie Mane. Even now, though, all he has to do is come into a room and women practically leave their husbands for him."

"He asked me out on a date," Florence said. "For tomorrow night. I said I'd check with you."

"I'm afraid not," said Natalie. "I'm having a big dinner party tomorrow night. I told you. It's all arranged. You know how carefully I plan these things. You don't mind, do you?"

"Oh, that's fine," Florence said. "I told him I'd check with you. It's no problem. I'll just tell him you already had something planned. I'm not even interested in him. It's just that—I felt sorry for him."

Natalie looked her up and down. "You felt sorry for Charlie!"

"Like an egg!" said Natalie. "Oh, God, wait until I tell him. You thought he was like an egg."

"Natalie," said Florence. "Please don't tell him. You have to swear. Promise me you're not going to tell him I thought he was like an egg. I love eggs! Sweet, speckly eggs. Do you promise?"

"You'll be staying on the third floor," said Natalie. "I'm afraid there's nobody to carry your bag at the moment. John's at the golf course. The housekeeper's hurt her back. She's cooking dinner, in the kitchen. I said you'd be happy to help her when you've gotten settled. You don't mind, do you?"

"Good," said Natalie. "Because my aromatherapist is coming in ten minutes. She gives me a massage too. You should try it sometime, Florence. You'd love it."

"No, she's very reasonable. Only two hundred a session. Do you want her to do you tonight, if she's free?"

"Maybe some other time," said Florence.

"Up to you. Anyway, I've put you in the little bedroom. I thought you'd be more comfortable. Go to the third floor, turn right and then left, and it's the second room on the right. There's kind of a lot of junk around—I've been storing things there while I had the other two top-floor bedrooms redone—but you don't care, do

Natalie had told her the second room on the right, but Florence must have made a wrong turn: when she opened the door weaponry from an expensive vacuum cleaner crashed down, smashing her across the foot. There was a single bed, but its surface was covered with boxes marked college papers and winter clothing. It must be wonderful to have such a large storage space, Florence thought, going to the window and opening it. The ocean wasn't visible, but by way of compensation a field of potato plants undulated like waves, stopping at a sand-colored strip of highway. Across the road was another house, similar to Natalie's, as large as an ocean liner, only completely square, with tiny windows the size of portholes. A tangy fertilizer scent tingled her nose and, eyes watering, she rummaged for a tissue. She had to battle the door-

knob for a few minutes before she could escape: it had been installed backward, or upside down, or something. She almost panicked, and when she finally got out she realized the lock was on the wrong side, in the hall. She had been in the storage closet; what was obviously her bedroom was on the other side of the hall.

She went back down and found Natalie in the kitchen by the gleaming industrial-sized stove. "It's so nice out here," she said.

Natalie turned and for a second looked as if she had never seen Florence in her life and was trying to remember where the burglar alarm switch was located. "I was just making some tea for my aromatherapist," Natalie finally said. "She likes to drink this special herbal tea that's very hard to find. I managed to locate the only box in Manhattan and had John bring it out. It's ridiculously expensive. I can't imagine what's in it. The label is written in Tibetan, or something."

Crown of Dragonfire by Daniel Arenson
Unlikely by Sylvie Fox
All the Pretty Faces by Rita Herron
Two Shades of Morning by Janice Daugharty
The Girl With the Jade Green Eyes by John Boyd
Battle Mage Visions (A Tale of Alus Book 12) by Donald Wigboldy
Nice Jumper by Tom Cox
Veiled (A Short Story) by Elliot, Kendra
A Death in the Pavilion by Caroline Dunford
I'll Be Home For Christmas (A Coming Home Novella) by Scott, Jessica