Read A Crack in the Wall Online

A Crack in the Wall 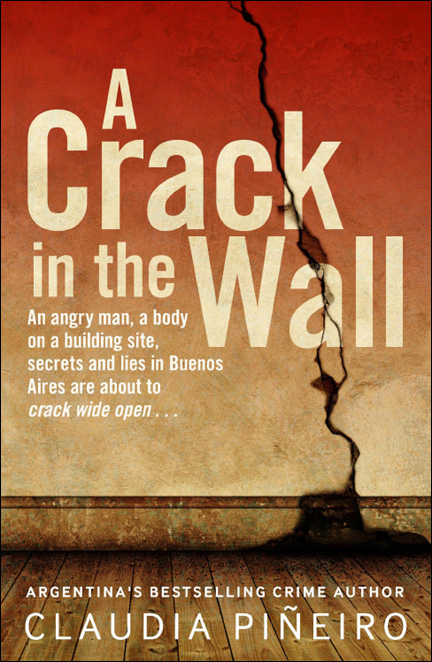 Claudia PiÃ±eiro lives in Buenos Aires. For many years she was a journalist, playwright and television scriptwriter and in 1992 she won the prestigious PlÃ©yade journalism award. She has more recently turned to fiction and is the author of the novel
Thursday Night Widows
, awarded the Clarin Prize for Fiction, and
All Yours
, both previously published by Bitter Lemon Press.

All Yours
Thursday Night Widows

A CRACK
IN THE WALL

Translated from the Spanish
by Miranda France

All rights reserved. No part of this publication may be reproduced in any form or by any means without written permission of the publisher.

The moral rights of the author and the translator have been asserted in accordance with the Copyright, Designs and Patents Act 1988.

All the characters and events described in this novel are imaginary and any similarity with real people or events is purely coincidental.

“Listen. Suppose this wasn't a crack in you â suppose it was a crack in the Grand Canyon.”

“The crack's in me,” I said heroically.

Pablo SimÃ³ is at his desk drawing the outline of a building that will never exist. He has been making the same sketch for years, like a man condemned to have the same dream every night: one about an eleven-storey tower facing north. There's a series of identical drawings in a file; he doesn't know exactly how many, he lost count a long time ago â more than a hundred, less than a thousand. They aren't numbered, but each one is dated and signed: Pablo SimÃ³, Architect. If he wanted to know which day he drew the first one, he would need to find it and look at the date, but he never does that; the most recent bears today's date: 15 March 2007. One day he plans to count them all, these drawings of the same tower on the same plot of land, with the same number of windows and balconies identically spaced, always the same faÃ§ade, the same garden to the front and sides of the building, with the same trees, one on either side of the front door. Pablo suspects that if he were to count the bricks drawn freehand on the faÃ§ade, he would find exactly the same number on each drawing. And for that very reason he doesn't count them â because it scares him to think that this obsessive drawing isn't the product of his own application but of some external force.

His eight-of-an-inch Caran d'Ache pencil goes up and down the page, shading, retouching, and SimÃ³ tells himself, yet again, that he will build this tower one day, when he finally decides to leave the Borla and Associates architectural practice. But this isn't the day to make such a decision, and so Pablo tries not to dwell on the fact that he is already forty-five, that this tower gets further every day from being anything more than graphite lines on a sheet of white paper and that a mere two yards from him Marta Horvat is carelessly crossing her legs as though there were nobody sitting opposite to notice.

He notices, of course, though Pablo SimÃ³ no longer thinks of Marta in the way he once did. Not that he doesn't want to, but for some time now â and he would rather not remember precisely how long â he hasn't been able to think of her without sudden and even violent interruptions to his pleasurable fantasies. It was different before. He used to dream of Marta all day and in his mind he owned her; he undressed her, he kissed her, touched her â and, since he couldn't foresee ever separating from Laura, Pablo SimÃ³ imagined that if his wife died, as all of us shall die one day, Marta Horvat would cease to be simply that woman he undressed in his fantasies and he would try to win her for real.

Two yards from where Pablo is drawing, with a skill that comes as naturally to him as walking, talking or breathing, Marta sits at her own desk, shouting down the telephone at a contractor. She's complaining that this man hasn't finished a cementing job on time; she says she doesn't care about the rain or the two public holidays that fell within that month, much less about the transport workers' strike. She declares, with a vehemence that is all too familiar to Pablo, that she likes people who keep their word. And she
cuts him off. Pablo pictures the contractor, left hanging at the other end of the line, reeling from this tongue-lashing and with no chance of a comeback. Without looking up from his drawing, Pablo knows that Marta has risen from her desk and is pacing around the office. He hears each step, hears her light a cigarette, hears her throw the lighter back into her bag and the bag onto a chair. He hears her walking again and, finally, coming over to him. Pablo covers his sketch with other papers; he doesn't want Marta to see what he is doing â not that she hasn't found him drawing this north-facing, eleven-storey tower before, but he wants to be spared her comments about him and his useless obsessions. Mind you, Marta Horvat would never use those words; she wouldn't say “useless obsessions”, she would simply say, “The plot ratio doesn't work, Pablo.” And even though Pablo doesn't need anyone to tell him what that means, over the years she has often explained it to him, apparently in the belief that Pablo doesn't really grasp how important it is to exploit to the maximum the relationship between a plot's square footage and the number of flats that can be built on it. For that reason, she says, nobody will ever construct a building like the one he has in mind on any plot in Buenos Aires that has enough square feet to build something higher than his whimsical eleven storeys. He always lets Marta say her piece, but Pablo SimÃ³ knows her argument would collapse if he pointed out one detail: he doesn't want to build the tower in Buenos Aires. This isn't the city where he aspires to carry out the first project he can really call his own. He knows it too well. There isn't a street he hasn't gone down looking for plots for Borla and Associates, and his exhaustive surveys have taught him that you can't lay a single brick in Buenos Aires without first finding a building and condemning it to annihilation: a
car park, a school, a family home, a cinema, a warehouse, a gym â it doesn't matter what, so long as the width and surface area allow for a high-rise. Pablo SimÃ³ doesn't want to raise his building on the rubble of something else, but in Argentina's capital there is no longer any alternative. What Marta doesn't realize is that when the day finally comes he'll choose another city. He doesn't yet know which â perhaps somewhere he's never been â but he does know that it will be somewhere where a north-facing building can get the morning sun and be built without anyone shedding tears for what was there before.

Marta pauses behind him. On top of the pile of papers Pablo has used to cover his sketch is the advertisement he has to look at before returning it to the agency. In a few days they are going to start selling another building off-plan and the announcement needs to appear in the weekend's newspapers. The heading they've chosen is “Paradise Exists”, in big, colourful typography above a page of text at the bottom of which the same burgundy letters spell out “Borla and Associates”. Marta reads it over his shoulder. She suggests he cross out “laundry room” and replace it with “utility room”. Pablo isn't sure, but she insists, reminding him that the agency must have used as a template the announcement for the last building they sold, the one in Avenida La Plata, and that while a laundry room is fine for Boedo, it isn't for Palermo. Pablo lets himself be persuaded, crosses out “laundry” and writes “utility” above it. Marta, evidently taking this small intervention as a territorial victory, returns to her desk and packs up for the day.

In fact the day is not over yet, although Borla himself seems to be concluding business, coming out of his office carrying his briefcase and an umbrella that must have been left there on some previous occasion, given that the sky
dawned blue over Buenos Aires this morning and stayed blue all day. Borla walks over to Marta's desk and asks some routine questions while taking advantage of his position to peer into her cleavage. She smiles and answers; he lowers his voice and Pablo can't make out what they're saying, but he can see that the bad mood that induced Marta Horvat to shout at the contractor has evaporated. Marta's hands move in the air, accompanying each of her words. Pablo, still at his desk, follows their movement, hypnotized by the red nails; he watches her hands dance in the air, swirling back and forth, making circles, pausing as though ready to swoop and finally covering the face that disappears behind them when Marta bursts out laughing. Borla draws closer and whispers something quickly into her ear, some word that takes no longer to say than it takes him to lean in to her then move away to watch her reaction. And then they both laugh.

All indications are that in a few minutes Pablo will have the office to himself, that he'll proceed as he does every evening, tidying his drawing board and desk, patting his top pocket to be sure that the tape measure is there where it should be and putting his smooth-paged notebook into the inside pocket of his jacket; he'll attach the Caran d'Ache pencil between the second and third buttons of his shirt, with its point tucked in under the fabric, and finally he too will go, after all the others. However, things don't always work out as imagined, and on that evening that Pablo SimÃ³ drew, yet again, his eleven-storey tower that will never be built, precisely at the moment that Borla says to Marta, “Want a lift anywhere?” there is a knock at the door and a young woman steps into the room, wearing black trainers, jeans and a white T-shirt, a woman carrying a much larger backpack than you might expect of someone merely popping in, a
woman Pablo judges to be no more than twenty-five years old, and without any greeting or preliminaries she says: