Read A Death in the Lucky Holiday Hotel Online

A Death in the Lucky Holiday Hotel 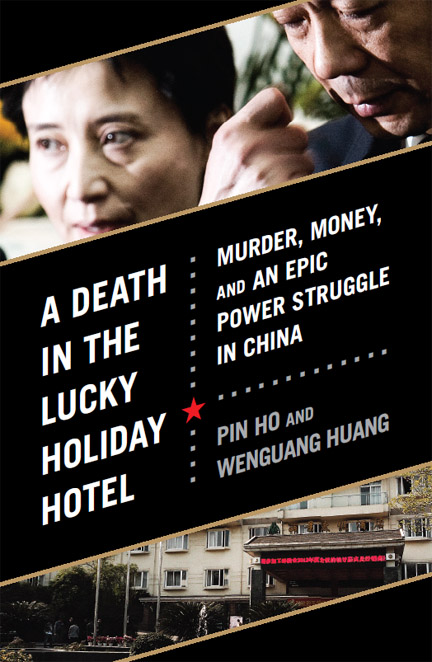 A DEATH IN THE
LUCKY HOLIDAY HOTEL

A
DEATH
IN THE

Murder, Money
,
and an Epic Power Struggle
in China

Published in the United States by PublicAffairs™, a Member of the Perseus Books Group

No part of this book may be reproduced in any manner whatsoever without written permission except in the case of brief quotations embodied in critical articles and reviews. For information, address PublicAffairs, 250 West 57th Street, 15th Floor, New York, NY 10107.

A record for the printed edition is available at the Library of Congress.

PART I
: The Fate of a
Kuli

The Slap in the Face

US Consulate Under Siege

“Inviting the Gentleman to the Urn”

Sitting Tight on the Fishing Boat

“The City of Double Happiness”

A Death at the Lucky Holiday Hotel

The Non-Trial of the Century

From China with Love

PART IV
: The Victor Is King and the Loser a Bandit

The Unexpected Loser: “People’s Premier” or the “King of Showbiz”?

Hu Is a Loser: The President and his Chief of Staff

The Ultimate Loser: “We’ll Never Allow him to Walk Out Alive”

This book represents the joint efforts of Ho Pin and Wenguang Huang, who have teamed up to relate a tale of scandal, intrigue, and murder in Chongqing—a tale that has had profound repercussions on China and the world. For the sake of clear and compelling storytelling, however, we have chosen to narrate the story using the voice of Ho Pin—a commentator on Chinese politics, and a magazine/book/website publisher who broke the news about several pivotal events in the Bo Xilai scandal and subsequently, as the scandal unraveled, became part of this sprawling story.

We intend this book to be an insider’s take on a political murder that set off a dramatic, behind-the-scenes fight for power at the highest echelons. It has incorporated a significant amount of previously unpublished information as well as the views of many insiders who rarely, if ever, talk publicly to the press and the public. To research the book, we interviewed more than fifty current and former Chinese government officials, well-connected businesspeople, veteran political analysts, and independent journalists—all of whom shared their knowledge about the Bo Xilai case and the inner workings of the Communist Party. Many chose to remain anonymous for fear of political reprisal. In addition to these interviews, we followed the daily postings on Weibo—China’s version of Twitter—and various articles posted on overseas Chinese language websites that escaped government censorship and unveiled critical information at the peak of the scandal. Later, in order to get an on-the-ground experience of the locale for this political drama, Wenguang Huang, posing as a tourist, took a week-long trip to Chongqing in November 2012 to interview government officials, police officers, and ordinary people on the street. He also visited and photographed the hotel where British businessman Neil Heywood was killed. The fact-checking trip enabled us to get an exact sense of the drama and its impact locally and nationally.

What has emerged from this endeavor, we hope, is the most comprehensive account of the Neil Heywood murder scandal that shocked and riveted the international community in 2012 as well as a stunning and unsettling portrait of the different intertwined interest groups and political factions within the Chinese Communist Party’s top decision-making body.

It is not a pretty picture.

Though, when appearing in public, China’s leaders present a uniform picture of total solidarity—an all-male group uniformly clad in dark suits, white shirts, and (often) red ties with dyed, jet-black hair—the group is anything but a solid, unified group of wise men presiding over the fate of roughly a fifth of the world’s population. There are fierce internal power struggles, pitting one political faction and economic interest group against another, massive amounts of official and non-official corruption, byzantine intrigues, and hardball tactics that stop at nothing. The rules of engagement more closely resemble those of warring mafia families than anything else, with princeling tangling with princeling over turf and territory.

And this time, there are some new ingredients in this Chinese hot-pot. In the past, the Communist Party monopolized the flow of information and political scandals were kept secret. The public didn’t learn about events until months, or years, later. However, as more Chinese are becoming fluent English readers, they use many different means to translate the foreign media reports and transmit them back to China via the Internet.

Realizing that the public craved Chinese news from overseas, and considering Western media outlets to be more reliable sources of information than the state-controlled propaganda machine, the political and business elite as well as friends and relatives of senior Communist leaders have often used secret means to feed Western journalists and political analysts with “exclusives.” Some had their friends post banned information on Weibo. Thanks to these political insiders, the world was able to receive real-time coverage as the scandal unfolded, enabling the foreign media to create a small fissure in the secret maneuverings of the Communist Party. Many blog postings and overseas media reports were castigated by government as
“vicious rumors,” but the majority of them proved to be close to the truth. The government official media, on the contrary, turned out to be the biggest rumormonger of all.

However, the foreign media have also learned a valuable lesson from the Bo Xilai coverage. Knowing the challenges Western media face in obtaining news via regular channels, some political insiders, often with tacit approvals from the Communist leadership, manipulated the international media, leaking information that was a mélange of truth, lies, and pure speculation to advance a specific political agenda. As a consequence, many media outlets, including
Mingjing News
(one of Ho Pin’s Chinese-language news sites), carried stories that subsequently proved to be inaccurate or wrong. For example, based on an insider’s tip, we posted a story that Bo Xilai’s trial would take place in October 2012 in the city of Changsha, but it never panned out. In addition, before Bo Xilai was officially charged, Western reporters, acting on tips from insiders, published lurid allegations against him, suggesting that the Bo Xilai case was a fight between reformists and an extreme and corrupt Maoist. As a consequence, the overseas media played a role, in a way that the state media could never have, in a massive government smear campaign against Bo.

As more sources are becoming available in China, Western media organizations are better able to verify each story to improve accuracy and independence. Since this book was written over a period of six months, we were able to work with Chen Xiaoping, a US-based legal scholar and journalist, to check our sources in China, verify details, incorporate the most up-to-date information, and modify any inaccuracies that had occurred in earlier news reports. Despite these efforts, some errors and misjudgments may remain and we take responsibility for them. We hope that other writers, journalists, and historians who follow in our footsteps will be able to further clarify the historical record.

At the time of this writing (January 2013), Bloomberg and the
New York Times
released a series of investigative reports that shed light on the family finances of senior Chinese leaders. With their aggressive coverage of China, Western media giants such as the Bloomberg,
The Guardian
, the
Daily Telegraph
, the
Economist
,
The Financial Times
,
the
New York Times
, and the
Wall Street Journal
, as well as Chinese-language media outlets operating outside of China, are directly influencing Chinese politics more than ever before. Their coverage is being filtered back to mainland China, forcing the government to respond and making events more transparent. We expect this will continue in the future. As different factions compete to leak information to the Western media and air their opponent’s dirty laundry, their actions may intensify power struggles in the short-term, but in the long-run will hasten changes within the Communist Party.

Bo Yibo
—Bo Xilai’s father and a revolutionary veteran who was a Politburo member and served as China’s vice premier before his death in 2007.

Bo Guagua
—Bo Xilai’s son, who now resides in the US.

Gu Jingsheng
—Gu Kailai’s father and a former military general before his death in 2004.