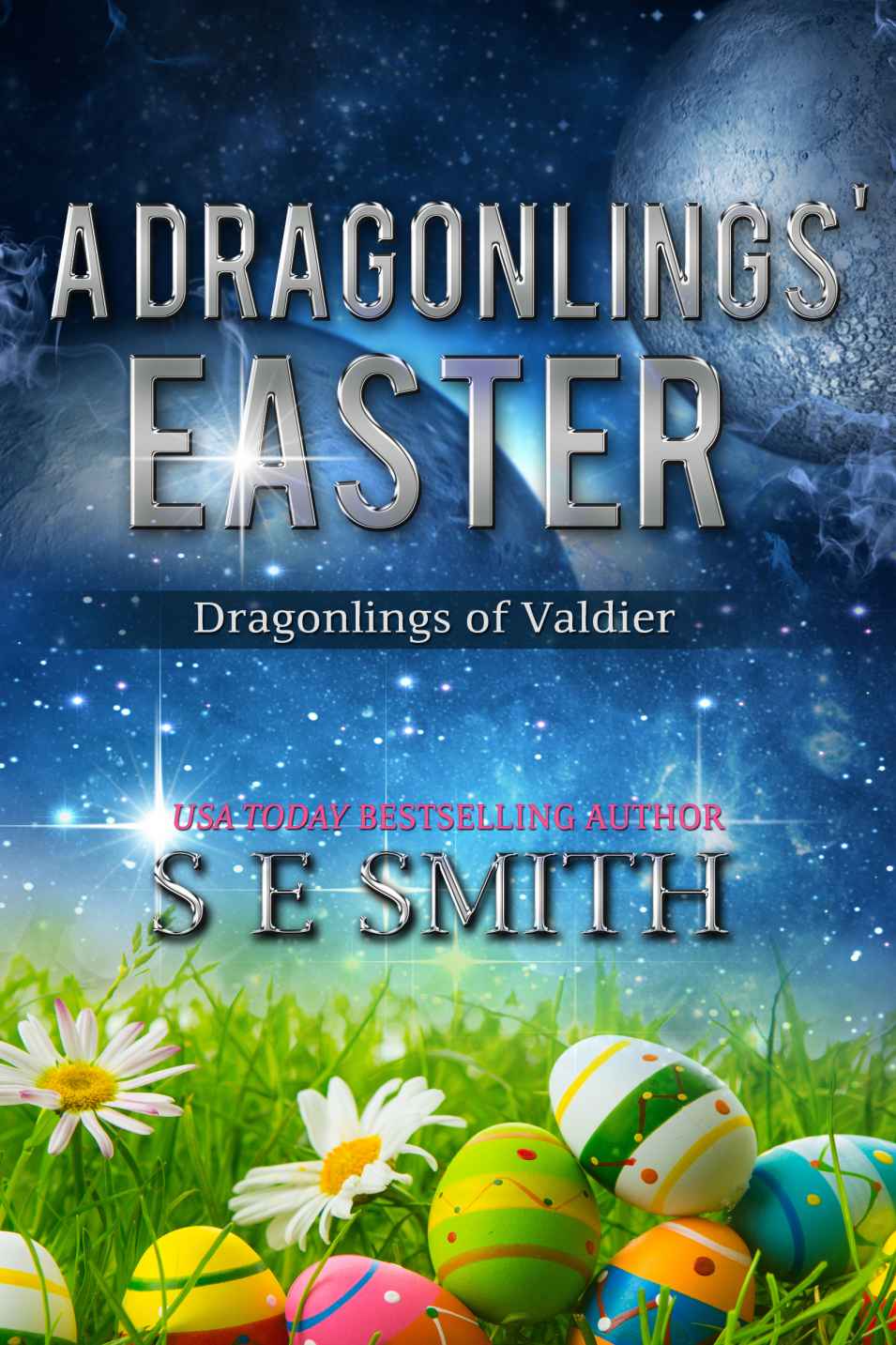 I would like to thank my husband Steve for believing in me and being proud enough of me to give me the courage to follow my dream. I would also like to give a special thank you to my sister and best friend Linda, who not only encouraged me to write but who also read the manuscript. Also to my other friends who believe in me: Julie, Jackie, Lisa, Sally, Elizabeth (Beth) and Narelle. The girls that keep me going!

ALL RIGHTS RESERVED: This literary work may not be reproduced or transmitted in any form or by any means, including electronic or photographic reproduction, in whole or in part, without express written permission from the author.

All characters, places, and events in this book are fictitious or have been used fictitiously and are not to be construed as real. Any resemblance to actual persons living or dead, actual events, locales, or organizations are strictly coincidental.

When Abby creates a set of Easter Eggs for each
Dragonling she has no idea she is about to start a new tradition on Valdier. What happens when the men and the dragonlings take the hunt for the colorful eggs to heart? Laughter and a whole lot of crispy eggs!

For those who have not read the Dragon Lords of
Valdier, here is a little background.

The
Valdier are dragon shifters who have a golden symbiot, yes, symbiot, just the way I want them to be called as they are a character all themselves. The Valdier consist of three parts: the dragon, the man/woman, and their symbiot companion. They are friends with the Curizan (a species able to harness the energy around them) and the Sarafin Warriors (a cat shifting species). The following is a character relationship for those new to the series:

Zoran
Reykill, Leader of the Valdier
mated to
Abby Tanner: one son: Zohar

“
What are you doing?” Zoran Reykill asked, wrapping his arms around his mate’s waist and pulling her back against him.

Abby relaxed against him as she studied the last Easter
egg she had designed. Each softball size egg had a miniature replica of a dragonling in the center. She had even made one for Vox and Riley’s new ‘cub’, Roam.

She had been feeling whimsical and all the new flowers blooming had made her think of Easter back on her mountain. Now, a row of the colorful glass and semi-precious jeweled eggs lined the workbench in
the large studio set on the upper level of the palace. She reached out and gently touched the colorful blown glass egg featuring their son, Zohar.

“
I was thinking of Easter,” Abby admitted with a sigh. “My grandparents loved the different holidays. Every Easter, we would spend hours dyeing eggs and decorating them up. Then my grandfather would get up extra early and hide them.” She laughed as she tilted her head back to gaze up into his eyes. “I never did find them all. Edna would bring Bo up and he would invariably find the ones I missed and roll in them.”

Zoran frown
ed in confusion as he stared down at the delicate egg. It still amazed him the beauty and attention to detail Abby was able to recreate with bits of glass. It reminded him of her and their son; beautiful and precious. His arms tightened and a low growl rumbled from him as he bent his head to press his lips against her neck.

His tongue swept over the silky flesh three times before he felt his dragon stir in excitement. He pressed against her to let her feel his arousal. Her swift inhale of breath and the tilt of her head to expose more of her throat to him
told him she was not immune to his desire.

“
Your mom and Paul have him,” Abby groaned. “They…” Her voice died when his hands moved up to cup her breasts.

“
Good,” he whispered before he called to his dragon.

Abby
’s loud moan echoed through the room as the intense heat of the dragon’s fire swept through her. Her dragon answered her mate’s call immediately with a passion of her own. Pale blue, gold and white scales rippled up over her arms as he breathed into her. Shivers of desire wracked her body as she gripped the strong arms holding her.

The sound of ripping cloth echoed loudly in the room as sharp claws cut through the tunic covering her clothes. Soon, her shirt and skirt lay in tattered remains on the floor along with it. Refusing to give in easily, Abby twisted in Zoran
’s arms as he reluctantly pulled back.

Her dark blue eyes flashed with fire as she stepped to the side and shifted. Her dragon, excited at the idea of the chase, bounded with delight. She ran her long tongue around his wrist before she turned and rushed for the open doors overlooking the gardens far below.

She paused for a moment to glance back over her shoulder at her mate as she gripped the stone railing. With a soft snort, she turned back around and launched herself into the air. A loud roar followed her as she swept through the cool evening air and over the walls of the palace.

Abby lifted her face to the refreshing breeze as she flew. She could feel the heat of Zoran’s dragon as he caught up with her. She loved how he flew closer to her until their wings actually brushed against each other at times. As the large meadow not far from palace came into view, he rose until he was flying slightly above her. She knew he was scanning the area to make sure it was safe.

I love being able to fly. I don
’t think I will ever get tired of it,
she murmured to him.

This is what I will never get never tire of,
Zoran responded with a low growl.

Abby
’s gasp turned to a soft delighted chuckle as the large dragon above her suddenly wrapped his tail around hers, spinning her in midair. The moment her soft underside was exposed, he gripped her front claws in his and drew her closer. Her soft cry filled the air as he impaled her.

Zoran groaned as he slowly sank toward the ground far below. He fought hard to stay focused until his back legs touched down in the waist high grass. He carefully released her front claws, watching as she sank back on the ground with her wings
rising to fold up along his body. His wings continued to beat as he sank further down until he rested over her, caging her under him. He lowered his head so he could run his long tongue along her jaw.

I love you, Abby,
he groaned as he settled deeper into her.
So very, very much.

Abby rubbed her long, slender cheek against his, letting him know how much his words meant to her. Her front claws clutched at his forearms as he began rocking faster. Soon, their combined cries echoed in the sea of waist high purple grass.

A low moan escaped her much later as she felt Zoran withdraw from her. Without a word she shifted at the same time as he did. Now, instead of massive wings caging her body, Zoran’s strong arms held her close to him. She snuggled closer and sighed as she stared up at the glittering stars.

“
What is it?” Zoran asked in a husky voice, gently brushing her long hair back from her face.

She smiled as she gazed up at the night sky. Two moons, one a quarter full and the other just a sliver shone along with the stars. Her eyes moved to his when he leaned over her, blocking out everything but his face creased in concern.

She raised her hand and gently ran her fingers along his jaw. “Nothing…,” she started to say before his low growl of displeasure stopped her. She released another sigh and let her hand drop to her chest. “I was just thinking of my grandparents. I miss them. I miss the fun we had on my mountain.”

“
Fun? Such as this Easter egg hunt you did with them?” He asked with a frown.

“
Yes, like the Easter egg hunt. I always dreamed of one day sharing that with my own children,” she admitted. “Easter is just one of the holidays. I’ve never really asked what type of holidays you have here.”

Abby
’s eyes burned for a moment before she blinked them clear. “What about your Gods and Goddesses? I’ve been here for over a year but I’ve never seen you celebrate them. I know your mom is a Priestess to them.”

“
We accept them as they accept us. They have no wish for us to celebrate them. They are a part of us. It would be like celebrating ourselves,” he explained, confused. “Why would I wish to do that?”

“
I don’t know. I just wondered,” she whispered, looking away so he couldn’t see the sadness in her eyes. “Sometimes I just miss some of the things from home.”

Zoran
’s eyes turned dark with concern. He gently cupped her chin and turned her face so she was forced to look at him. It tore at him when she was unhappy. His eyes glittered with determination as an idea formed in his mind.

“
There is no reason we cannot have this Easter egg hunt. I think it would be good for Zohar to learn things from your world. He should know these things,” he stated firmly. “Tomorrow, we will have this hunt.”

Abby giggled at the look in her mate
’s eyes. She had discovered when Zoran had that look, he wouldn’t change his mind. She slid her arms around his neck and pulled him closer, hugging him to her before laying back to look up at him with an excited smile.

“
We need to plan it. I’ll organize everything tomorrow. Riley will love it. She was talking to me earlier about it when I showed her the egg I designed for Roam. Ha’ven and Emma are coming as well. I’d like them to be here. Oh, I’ll need to make another egg for their daughter Alice. I know Emma will enjoy it. I’ll let the other girls know as well and we can boil the eggs and the kids can help us color them and…” She never got to finish her plans.

Zoran, mesmerized by her glowing face, pulled her closer so he could kiss her.
Now, it is time for the man to take his woman,
he thought as he deepened the kiss.